Read High on a Mountain Online

High on a Mountain 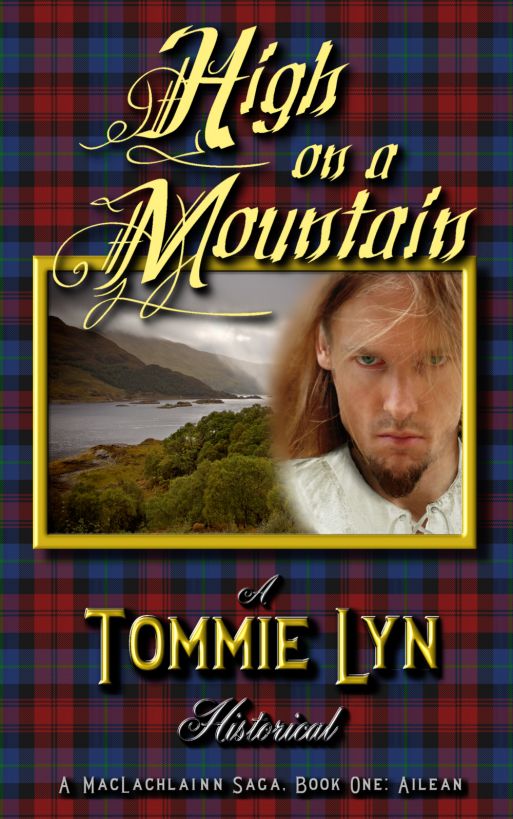 HIGH ON A MOUNTAIN

Cover image adapted from photographs
from:

Selection from “The Tears of Scotland” by
Tobias Smollet

is in the Public Domain

This is a work of fiction. Names, characters,
places and events are products of the author’s imagination or are
used fictitiously. Any resemblance to actual persons, living or
dead, locales or events is entirely coincidental.

This ebook is licensed for your personal
enjoyment only. This ebook may not be re-sold or given away to
other people. If you would like to share this book with another
person, please purchase an additional copy for each person you
share it with. If you’re reading this book and did not purchase it,
or it was not purchased for your use only, then you should return
to Smashwords.com and purchase your own copy. Thank you for
respecting the hard work of this author.

HIGH ON A MOUNTAIN

Dedicated to our Scottish ancestors,

who suffered so much, yet

endured it all without complaint

and without succumbing to self-pity.

of unfamiliar words used in the text

Scottish Gaelic Given Names Appearing in the
Story

Definitions of Gaelic Words Used in the
Text

àirigh
- (airy) - A shealing; a hill
pasture, or summer residence for herdsmen and cattle; a level green
among hills

airisaid
- The outer garment worn by
women, a large piece of fabric, usually of a pale color with
contrasting stripes, pleated around the waist and tied in place
with a belt, the upper part pulled over the shoulders and fastened
with a brooch or bodkin

caman
- The curved, slanted head of a
stick used in the game of camanachd

camanachd
- A game played by Celts for
2,000 years, also called shinty; field hockey and golf are said to
be derived from this game

féileadh-mòr
- (filamor) The outer
garment worn by Highland men; a large piece of fabric, usually
woven tartan, which was worn pleated and belted at the waist, with
the excess fabric pulled over the left shoulder and fastened with a
brooch or bodkin

sporan
- A purse or pouch worn by
Highland men

NOTE: the Scottish spelling “whisky” is used
throughout the text. “Whisky” is an anglicized form of the Scottish
Gaelic
uisge-beatha
, “water of life.”

Definitions of Cherokee Words Used in the
Text

anetsa
- a ballgame from which la
crosse was derived. Anetsa means “little brother of war.”

The Western Highlands of Scotland, March,
1728

Dim light from the peat fire on the hearth
cast a softening glow over the rough stone walls. Lingering aromas
from supper had aroused five-year-old Mùirne MacGriogair’s appetite
before the meal but hung about her unappreciated now that her
stomach was full. She scooted off her chair, stood at Granda’s side
and tugged at his tunic sleeve.

“And what would you be wanting, little lass?”
he asked, habitual smile crinkles appearing at the corners of his
eyes.

“A story.” Mùirne bounced on her bare feet.
“I want a story.”

“All right.” He lifted her onto his knee, as
he did every evening of her visit.

She leaned back against his chest and
entwined the fingers of one hand into the red curls of his beard.
Her other hand rested in her lap.

“So what shall I tell you tonight, lass. Let
me see…”

“Tell her about some of the things done to us
MacGriogairs. It’s time she knew.” Uncle Suibhne thumbed a string
on his fiddle, turned the peg a bit more.

“No.” Grandma spun her drop spindle. “Those
are things you tell a boy. Tell her a story more fitting for a
girl. She doesn’t need to hear about the fighting and the—”

A loud bellow from a cow penned outside the
door interrupted her.

Granda sat straight. “That one may be getting
ready to drop her calf. Suibhne, go see if she needs help. We may
have to bring her inside.”

Uncle Suibhne laid the fiddle on his chair
and left the cottage.

“Now.” Granda settled himself onto his chair
again, and Mùirne nestled closer, twisting a curl of his beard
around her finger. “What about a story of the fairies that live
inside the hills?”

“Which one shall I tell you?”

“Tell me the one about the bonnie lass
who—”

“Well, now. The bonnie lass again, is it? How
many times have I told you that one?” He smiled, cleared his throat
and began. “It happened one day that a man named—”

The door burst open. “It’s the Cambeuls!”
Uncle Suibhne shouted. He slammed the door, lowered the bar and
rushed to the wall where swords hung on pegs.

Granda pushed Mùirne from his lap and jumped
up from his chair. He started for his sword but paused and turned
to look at Mùirne. He scooped her up, and she gasped, threw her
arms around his neck and clung to him. She pressed her face against
his cheek, buried it in his beard.

He hurried to the chest in the corner and
lifted the lid, pulled out the blankets and placed Mùirne inside.
He wrested her arms loose from their tight grasp and pushed her
down inside the chest. Her eyes widened at a muffled thump on the
door. Granda looked over his shoulder, then at Mùirne, his eyes a
molten mix of hot rage and cold fear. Mùirne shrank from him.

“Stay in here where you’ll be safe. Don’t
come out until I tell you to. And don’t make any sound at all.
Understand?”

Mùirne stared at him, frozen, unable to
respond.

“Do you understand!” he roared.

He shut the lid. Mùirne wanted to cry—wanted
to call to him not to leave her in this dark place—wanted to push
the lid open and fly to the safety of Granda’s arms. But she
remained where he placed her, rigid, twisting the folds of her
clothing, wrapping the fabric about her fingers as though they were
still embedded in the wiry familiarity of Granda’s beard.

Voices Mùirne didn’t recognize called out,
the words distant and indistinct. Granda and Uncle Suibhne yelled
in reply. And then came more thumps and a splintering.

She covered her ears and squeezed her eyes
shut, tried to shut out the terrifying clamor of fighting: bellows
and curses, the clang of sword striking sword. When she heard
sobbing from Grandma, her breaths became panting, and her fear
grew, swelled until it seemed to fill the wooden chest, and it
pressed down on her, holding her in place.

She thought the fighting would go on without
end, and she wanted to throw open the lid, jump from her hiding
place and run far away. A shriek from Grandma pierced the air like
a sharp dirk, and Mùirne shoved her fist into her mouth to stop an
answering scream from escaping. Other sounds came, went—and all was
quiet.

Mùirne waited for Granda to take her from the
stuffy chest. But he didn’t come. Perhaps he had forgotten her.
Surely it was safe to get out now. Each breath came harder, and she
longed to be in the open air. She pushed the lid open a little,
just enough to get a breath.

No one said anything.

She waited a bit longer and raised the lid
further. Mùirne looked through the open crack and saw part of the
room where firelight dispelled the darkness. Granda was slumped
over the worktable against the far wall.

She couldn’t see Uncle Suibhne or Grandma.
Where were they?

So Mùirne pushed the lid open and stood. And
she saw them.

Uncle Suibhne lay on the earthen floor at
Granda’s feet, his head tilted back at an impossible angle. Grandma
lay near the fire, the front of her tunic covered with blood.

Mùirne began to shake. Her knees grew weak,
and she hardly had the strength to climb out of the chest. With her
back against the wall, she sidled toward the shattered door, her
eyes wide with horror and her breath coming in shuddering gulps.
She neared the door and saw Granda’s blood-spattered face, his eyes
open but not seeing. As she stared into them, Uncle Suibhne’s words
echoed through her mind…

The Western Highlands of Scotland, December,
1738

Ailean MacLachlainn clenched his teeth. He
pushed Latharn Cambeul’s
caman
aside with his own and took
control of the ball again. Latharn glared at him. Ailean gave the
ball a nudge to move it further into the open so he could strike a
solid blow and send it flying to the goal, but Latharn rammed his
shoulder into Ailean, pushed him off balance and interrupted his
swing.

He shouldered Latharn away, and the two
combatants shoved one another while each tried to take possession
of the ball. Two Cambeul players remained on the periphery of the
intense struggle between Latharn and Ailean, a duel which
transcended the rivalry of their clans’ annual
camanachd
game.

Latharn, the older, shorter and stronger of
the two, gritted his teeth, his lips curled away from them in an
angry sneer. He drew back his stick, swung his
caman
, not at
the ball but at Ailean’s legs, and tripped the lanky boy. Ailean
hit the ground with a thud. He winced as he struggled to his feet,
blood flowing from a gash on his shin.

Ailean’s older brother, Coinneach, and three
other MacLachlainn teammates came running toward the two scuffling
players. Coinneach, his eyes blazing with uncharacteristic anger,
slid to a stop in front of Latharn.

“You did that on purpose!” Coinneach smacked
the ball with a short but powerful stroke. A twinkle replaced the
anger in his eyes as his innate good humor rose to the surface.
“You better watch out that someone doesn’t mistake that little head
on your shoulders for the ball and take a swing at
it.
”