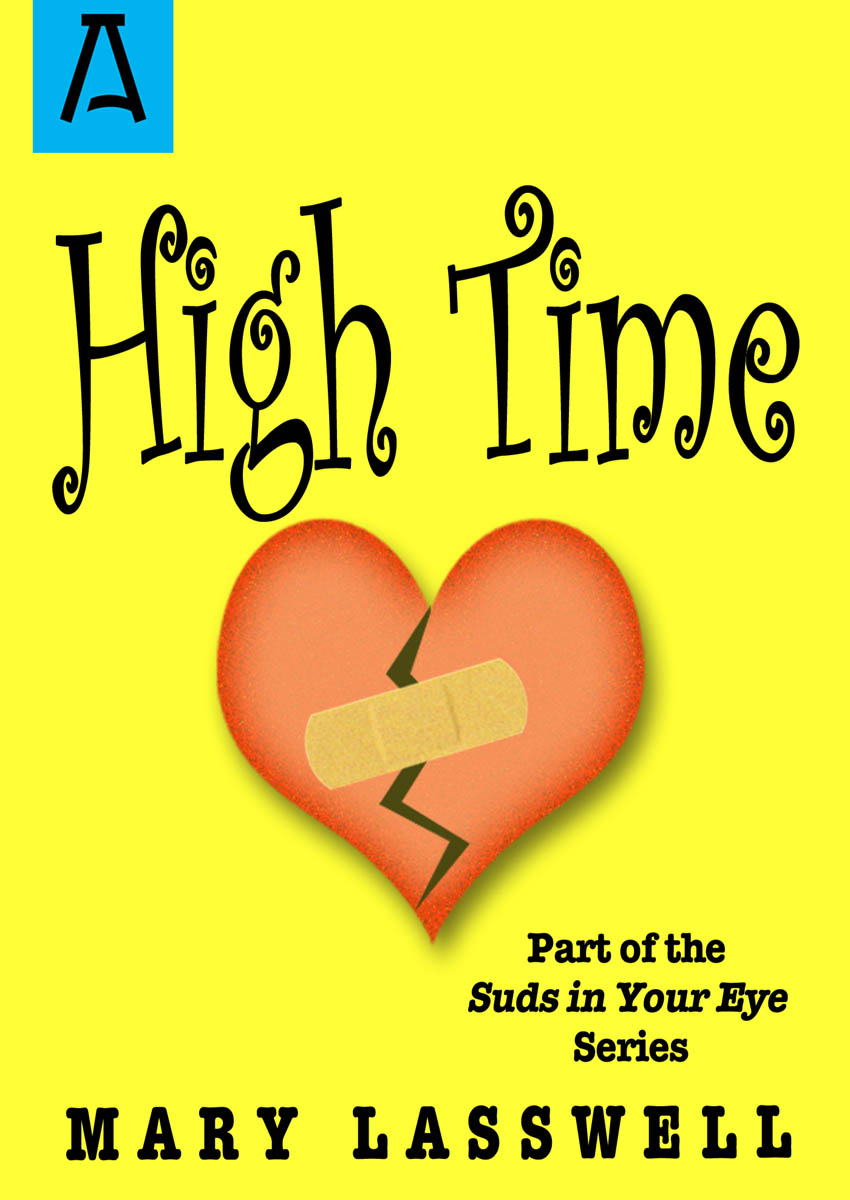 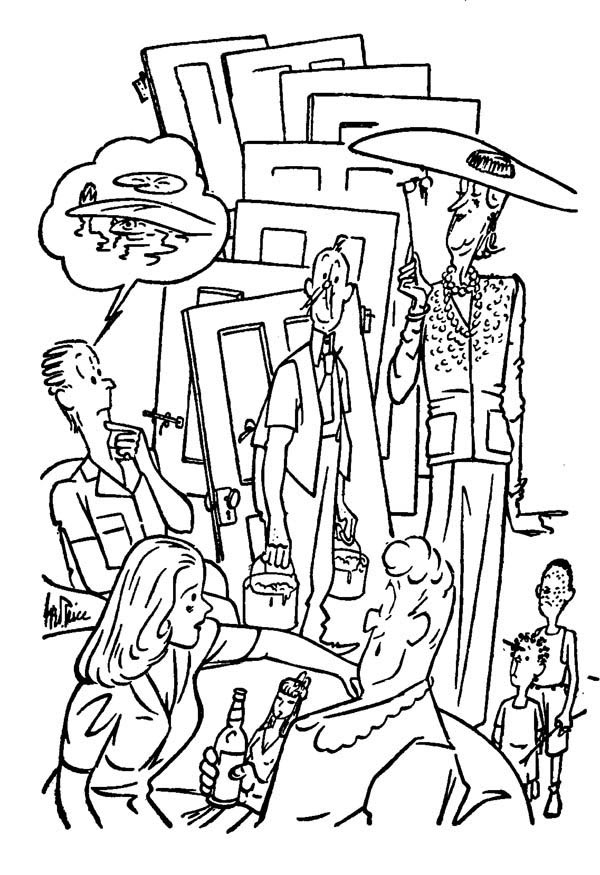 SUDS IN YOUR EYE

ONE ON THE HOUSE

WAIT FOR THE WAGON

The characters in this book are fictitious; any resemblance to real persons is wholly accidental and unintentional.

M
RS
.
FEELEY
looked around at what was left of her once lavish junk-yard. The late Mr. Feeley would have glowed if he could have seen how all the old car-bodies and sinks had gone marching off to war.

‘Beef on his bones, it woulda been if he was here!’ the widow sighed. The wall of beer cans that encircled the junk-yard gleamed in the morning sun and Mrs. Feeley ran her hand lovingly over the ice-plants that grew out of the top row of cans. She and Old Timer, her workingman, had filled many a lonely hour after Mr. Feeley was ‘took’ building that wall. Mrs. Feeley inherited Old Timer from her husband, too. The old fellow lived in the shed and took his meals with the ladies in the Ark. Mr. Feeley always said no bunch of women alive could get along without some old codger to lean on. Funny, how the wall had been the means of attracting Miss Tinkham…great day it was when that rare spirit had come into their midst. The house, silent for so long, rang gaily with her trills and chortles as she banged the ancient wreck of a piano and sang gaily every day. The tall, bony spinster’s genteel and ladylike frocks were a source of satisfaction to the chunky widow, since she herself was not the type for frills and furbelows.

‘An’ ever since Mrs. Rasmussen moved in with us and done all that fine cookin’, my overalls won’t hardly button on me no more!’ Mrs. Feeley eyed the straining and gaping seams of her faded denim dungarees. Her tubby contours were burgeoning right out of the overalls in several strategic spots.

‘They sure been fine friends to me an’ kep’ me company all right!’ Mrs. Feeley was thinking of the doors to new experience that her house-mates had opened for her. ‘They’re the salt of the earth, an’ no mistake—but they ain’t none of us coming through for America! We ain’t doin’ what we’d ought!’ The urge to get busy and do her share in the war was so strong upon Mrs. Feeley that she stopped digging in gladioli and went into the house muttering: ‘It’s high time something was did!’

Inside Mrs. Feeley’s house, known to all San Diego as Noah’s Ark on account of the name high up on the front of the building that had been a store years ago, Miss Tinkham had just finished page four in the book of Marchesi vocal exercises. Flushed with achievement, she sat “Thrift Shop.” Out of respect for Marchesi, Mrs. Rasmussen had refrained from pounding the flank steak that was to be stuffed and rolled for dinner. As Mrs. Feeley entered the door, Mrs. Rasmussen began to flail the meat mercilessly with a wooden mallet.

‘What about?’ Mrs. Rasmussen asked, restraining her muscular arm.

‘Has a crisis arisen?’ Miss Tinkham queried, dropping her gloves in her anxiety.

‘Arisen, hell! It’s done arose an’ been goin’ on full tilt ever since Pearl Harbor! Here we sit in the lap o’ luxury…not doin’ without a thing! In this country we don’t even know the war’s goin’ on! We’re plumb spoilt!’

‘I agree, dear lady!’ Miss Tinkham came over and stood by her friends. ‘Our country has given us so much…and with a lavish hand…the beautiful freedom of thought and speech!’

‘Yeah. In this country, if you got even a piece o’ bread…it’s enough.’ Mrs. Rasmussen announced staunchly.

‘An’ may I make so bold as to inquire what the goddam hell we’re doin’ for her?’ Mrs. Feeley demanded rhetorically.

Several minutes passed before any one of the ladies had an answer to that one. Miss Tinkham put her hand to her brow and walked the length of the Ark a few times. When she returned to the kitchen table, she had a pencil and piece of paper in her hand. She marked three columns on the paper:

‘This is just a point of departure, you understand: In column one, we have the most important ways to win the war! First question: Are you a member of the Armed Forces? Are you in the Army, Navy, or Marine Corps?’

There was a pregnant silence. That had them. By no stretch of the imagination could they fill that bill. Not a word was spoken as Miss Tinkham wrote a large and accusing NO in the first column.

‘How about Danny?’ Mrs. Feeley asked, pointing to the service flag on the screen door.

‘I’m afraid not,’ Miss Tinkham said. Since there was nothing further to be said on that score, she went ahead to the next column.

‘They don’t have no ladies.’ Mrs. Rasmussen knew the answer to that one.

‘My dear, are you forgetting the Wacs and the Waves? Such refined types!’ Miss Tinkham reminded her.

‘As a matter of fact, I think they were a little too stringent in their qualifications,’ Miss Tinkham agreed. ‘Mere callow youth is not always sufficient equipment to cope with emergencies such as may arise in total war. It seems to me that ladies of more mature experience and riper philosophy would be better equipped, especially for officers in these organizations. After all, look at Ninon de L’Enclos…’

‘Well, the big-bugs don’t agree with you…an’ if they had their way, they’d put us in that Borrowed Time outfit up at the Park.’

‘But dear Mrs. Feeley, that’s simply out of the question! One has to be seventy years old to join it!’ Miss Tinkham was horrified. ‘I, for one, have never associated with old people and I have no intention of beginning now! Besides, that could not possibly be classed as a military organization! Kindly let us stick to the subject.’

Miss Tinkham wrote in column two: ‘Due to ill-considered regulations of these organizations.’

‘Now! Column three: What are you going to do about it?’ Madame Chairman looked from one to the other.

Mrs. Rasmussen was the first to reply. Long experience had taught her that life at best was but a series of compromises, so she said: ‘The next best thing!’

Her friends nodded while Miss Tinkham wrote the answer in column three. All in all, not too favorable a showing.

‘Are you engaged in actual defense work? Are you making airplanes, guns, or tanks?’

‘Gawd! If you can’t think ’em up to stump us!’ Mrs. Feeley groaned.

‘If not, why not?’ Miss Tinkham continued relentlessly.

Mrs. Feeley spoke for all of them: ‘We ain’t tried!’

NO
in the first one, and
LACK OF EFFORT
in the second.

‘Well, now—what are we gonna do about it? Ain’t that the next question?’ Mrs. Feeley prompted.

‘Yes, dear ladies,’ Miss Tinkham agreed. ‘Our task is to find a way to become essential workers in a vital war industry.’

‘Okay!’ Mrs. Feeley cried. ‘We’ll go over to Consocraft in the mornin’!’

‘Sure! I’ve always had a yen to be a riveter myself!’ Mrs. Feeley chirped.

‘But, my dear,’ Miss Tinkham fluttered, ‘such an undertaking! Such responsibility! Do you think we could perform our duties adequately?’

‘Listen: you done said we gotta be sensual workers in a vile industry, an’ what we don’t know, they’ll learn us!’

‘Sensual workers in a vile industry,’ Mrs. Rasmussen chanted happily. ‘That’s us!’ And she went off to pound the steak some more.

Miss Tinkham launched into a debate with Mrs. Feeley about the problem of sweaters for aircraft workers. The main idea, it appeared, was that the ladies should be appropriately clad. Mrs. Feeley muttered something that sounded like catch the fish before you fry it. Suddenly she popped up from her chair.

At six o’clock the next morning the residents of Noah’s Ark were up and stirring. Mrs. Feeley was figuring whether or not they had enough gas left in the truck to take them to the factory and Mrs. Rasmussen was putting up a hefty lunch consisting of French loaves split lengthwise and stuffed, poor-boy fashion, with a variety of tasty viands; some of the snacks contained bits of Portuguese hot sausage mixed with scrambled eggs.

‘Sure go good with the beer!’ the chef grinned.

Miss Tinkham had spent her time arraying herself for the fray. She decided that a white crocheted blouse was just the thing with her coral sharkskin slacks. It was seductive, and yet definitely out of the sweater class.

‘Bend over, dear,’ Mrs. Feeley suggested. ‘Ain’t you a mite crotch-bound in them slacks?’ Mrs. Feeley was an authority on trousers.

‘Not the least bit!’ Miss Tinkham cried, peering up from between her legs. ‘Such freedom and ease of movement! You don’t think my blouse is too décolleté for the factory?’

‘I shouldn’t wonder, but it’s got a neat job of air conditionin’!’ Mrs. Feeley was eager to get on with the hog-killing, but waited politely while Miss Tinkham selected and donned a choker of large black beads carved into the faces of Egyptian mummies.

Mrs. Rasmussen was waiting in the door with the lunch-basket.

When the personnel manager at Consocraft looked up from the papers on his desk and saw the triple apparition in front of him, he knew he shouldn’t have taken that second helping of Welsh rarebit. He turned around and glared at the weird assortment of sounds that was escaping from his office force.

‘Well?’ he said at last. He didn’t know himself whether it was a question or an exclamation. If the ladies sounded anything like they looked, he knew he was in for a bad quarter of an hour.

‘You see,’ Miss Tinkham began, ‘we feel that we are needed by our country in her darkest hour, in her greatest crisis, I might say…’

‘Your qualifications?’ the manager broke in. Because he was a nice, kindly soul he refrained from adding, ‘if any.’ Half a dozen times each day he asked himself why he had ever let himself be talked into the field of personnel management. Daily he interviewed hundreds of applicants—old people, unfit people, people who had never been trained to do work of any kind. He reduced them all to their lowest common denominator, the one thing they all had in common: a burning desire to help win the war. These three seemed extraordinarily likable to the manager, in spite of their rather weird looks. And because they looked like such good old skates, it was twice as hard for him to give them the mercy shot. He had worked out a formula that usually stopped old babes: