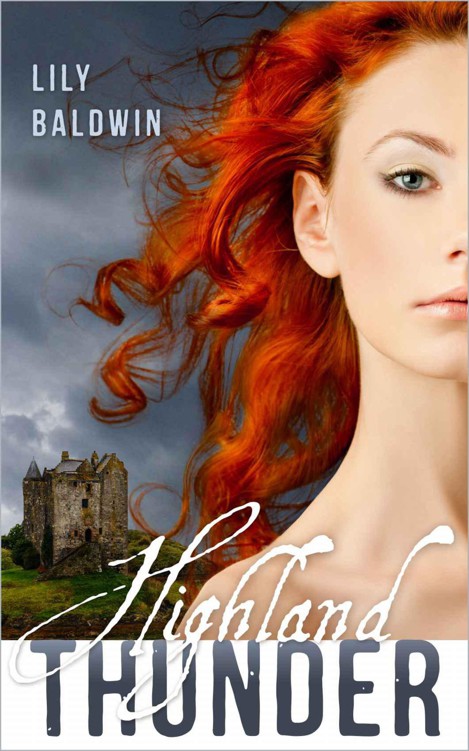 Letter from the author

Highland Thunder
is a work of fiction. Names, characters, places, and incidents are the product of the author’s imagination or are used fictitiously. Any resemblance to actual events, locales, or persons, living or dead, is entirely coincidental.

First, I must thank my beloved husband. This book would never have been written without your love and support. I would also like to thank Joey for your time, enthusiasm, and faith. Thank you to my editor, Sue Soares. A very big thank you to Suzan Tisdale—your guidance and support has been a huge blessing. And thank you to the women in my family, my mom and sister, for providing me with examples of incredible women in possession of courage, perseverance, and strength—you both make writing strong, capable heroines a breeze.

On the outskirts of

Duncan lay on the ground, his eyes open to a blur of blue and white as the sky whirled in dizzying circles. The drumming in his ears threatened to split his skull, and an invisible weight compressed his lungs as he struggled to draw breath. Wincing, he raised his head to look at his chest, but the only thing weighing him down was a blood-soaked plaid. At long last, his mouth opened, and he gasped for air. As he exhaled, his breath gave way to an anguished sob.

He looked down at the sword still grasped in his hand—Ewan’s sword. He released the steel as he sat up, his hands rushing over his body to find the bloodletting wound, but it was not his blood. It was Ewan’s. Screams suddenly rent the air, and he covered his ears against the tortured sound.

But they had escaped and were far from the slaughter. Why could he still hear their cries?

The bellows of the dying continued to echo inside his head. He pounded his skull with his own fist. If he hit himself hard enough, would his own pain mask theirs?

His stomach churned as his body sought to purge his soul of the horrific violence that choked his mind and blocked his vision from seeing naught but the brutalized bodies of women and children. He coughed and sputtered as yellow bile spewed from his lips.

After his body ceased to heave, he lay back down on the ground to stop the spinning while his mind sought refuge in memories of that morning before the massacre began…

“Duncan, might you consider lightening your expression? You are terrifying every woman and child who passes by,” Ewan said with a grin.

“You drank nigh a barrel of ale, Duncan. Why wouldn’t the lass cheat you? We are in Berwick, the great city. This is not Gribun.”

“Aye,” Duncan snapped. “I ken where we are, and at the moment, I do not wish to be reminded. A lass in Gribun would at least have given me a kiss before she robbed me blind.”

Ewan chuckled. “’Tis no wonder you have yet to find a wife, Duncan. You set your standards too high.”

Duncan laughed out loud at his friend’s jest. He could no longer deny the humor of his plight. Last night, following their evening meal at Crossings Tavern, a dancer entered the hall and stole his attention, his breath, and later a bag of coin, right out of his sporran. She was exotic, dressed in sheer veils that fell over a bejeweled bodice, revealing her bare midriff and curved hips—hips that undulated and shook as she passed from table to table.

She was sensuality beyond his wildest dreams, and as cup after cup of ale ran down his throat, his enamor grew in his mind until he was ready to propose marriage to the lass—or at least to her hips. He vaguely remembered Ewan and the other lads advising him to forget the dancer. He told them to sod off, and so they did.

Duncan and Jamie were the only unwed men in the small band of travelers from Mull, but even Jamie advised Duncan to be done with it. The other warriors refused to join his pursuit of drink and rolling hips. He was out-numbered and out-reasoned. With disapproving glances and shaking heads, they filed out of the tavern, leaving him at the mercy of the lass’s black eyes and even blacker heart.

“With your poor luck, you should swear off the fairer sex all together, Duncan. The last woman you fancied wanted more than your coin. Had you been any drunker, she would have filleted you like a herring,” Ewan said, slapping Duncan on the back, “and with your own knife.”

“What’s this?” Jamie intruded. “A woman took a knife to you, Duncan?”

No one beside Ewan knew of the humiliation Duncan suffered at the hand of a comely, mysterious, and rather deranged lass more than two years past. He had ridden up Benmore Mountain in pursuit of a stag who was trying to outrun death. Duncan’s arrow protruded from its chest, leaving a trail of blood in the melting snow. Winding hoof prints and red stained snow meant his tracking skills were not required to secure his prize, and so he allowed himself an easy ride and several warming sips of whiskey. As the mountain pass narrowed, he slid from his seat and guided his horse over the slippery trail. It was then he heard the song, delicate and sweet. The stag was forgotten for a new pursuit. He left the worn path, following the voice beyond a cluster of ice-covered rocks still untouched by spring’s warmth, and there she was. Golden brown hair hugged her naked body, the only shield concealing the wealth of her bosom. Her full, soft thighs forced the breath from his lungs.

She lifted her lids, showing him emerald eyes that glistened as a smile curved her mouth. He stared, breathless, while her fingers traveled beneath her mane, and in one fluid move, her hair spilled down her back, revealing creamy, full breasts that made his mouth ache.

When she arched her back and opened beckoning arms, he did not hesitate. Emboldened by the whiskey, he slid over her and seized her lips in a hungry kiss.

“What is your name?” he whispered.

He took her there on the mountain, and she cried out in his arms while she found her pleasure, but before he could even catch his breath, her countenance changed. Darkness invaded her eyes. She raised her hand above her head. His dagger gleamed in her fist.

Her strength shocked him as she fought against his escape. It was no small matter to wrest the blade from her grasp, but with his dagger restored to its rightful place in his boot, he mounted his horse, leaving her amid the rocks. A glance back sent shivers down his spine, as he glimpsed the hunger of madness in her eyes.

He had not touched a woman since—that is, until last night.

“God’s blood,” he swore. Perhaps Ewan was right. He should swear off women all together or mayhap just whiskey.

“What have we here?” Ewan said.

Duncan jerked around as he felt a tug on his plaid. His hand moved behind his back and grasped the hilt of his sword, but it was only a tiny lass vying with the city’s commotion and his own thoughts for his attention.

“Warrior,” she said, “’tis for you.” High above her smiling face she held a rosy orb.

“It appears as though word of my generosity has spread throughout all of Berwick,” Duncan said.

“Aye,” Ewan chuckled. “You are a marked man, Duncan MacKinnon.”

Duncan turned back to the lass. She was no taller than his waist. Her slim build and tattered tunic bespoke of the scarcity her family suffered. She seemed impervious to his height and his dark features, which often sent children scrambling out of his way before he could ease their fear with a smile. It had been so long since a child dared speak to him that he found himself growing uncomfortable under her unwavering scrutiny. He squatted down and brushed a golden lock of hair away from her unflinching face. Her lovely, soft blue eyes warmed when he took the apple from her hand. There was no point in denying that when it came to a pretty lass, he was as pliable as a new lamb. Would he ever learn?

He smiled and dug into his sporran and produced a handful of coin from his diminished supply, which he hid deep inside her basket to ensure she could return home without encountering trouble for his kindness. With a pat on her flaxen head, he instructed her to go straight there. She flung her thin, wee arms around his neck and pressed a kiss to his cheek. Then off she darted, disappearing among the throng of people milling about the crowded street.

“Your luck is changing, my friend,” Ewan laughed. “This time you earned a kiss for your trouble. Perhaps true love does awaits.”

“We can’t all be as blessed as you in marriage,” Duncan said.

Ewan stuck his finger in his ear, moving it about. “Saints above, my ears must need a good cleaning, because I thought I heard you compliment my Brenna.”

“Acceptable. Well, I will have to keep that compliment to myself. Such pretty words might go straight to her head.”

“Ewan, she is your wife. Why should my opinion matter?” Duncan said with a shrug.

“It doesn’t,” Ewan growled. “But as my oldest friend, I’d like to think I could trust you to respect what is mine.”

“That is just what I am trying to do,” Duncan replied.

“Try harder, you bloody…” Ewan’s stream of insults was interrupted by Cormac.

“Lads, this is a tired argument.”

Ewan continued to stare Duncan down with hostile intent. “If Duncan is finished insulting my wife, then we can head on our way.”

Duncan glanced at the apple in his hand. With a smile, he offered it to his friend. “’Tis yours. I paid a bloody fortune for it.”

A slow smile eased the harshness from Ewan’s face. “I accept your apology,” he said, grabbing the apple. He crunched a mouthful and mumbled, “Come lads, ‘tis midday, and I am hungry. Because you insist on giving the lasses of Berwick all your coin, Duncan, I shall pay for your meal.”

Duncan pounded his head into the sodden earth as he once again lay on his back. How could the world change so swiftly in the matter of a day? He knew the hard, iron taste of blood. Many warriors had met their death on the end of his blade. The Mull MacKinnons were no strangers to war, but this had not been war. Warriors—men practiced, prepared, and committed to the struggle—fought wars. The images of butchered children and women festered in his mind, the old and young alike being dragged out of hiding and executed in the streets. He could not silence their screams. He reached out his hand feeling around for Ewan’s sword.

Ewan. His best friend and noblest of men.

His fingers grazed the steel as he strained to grasp the hilt. When he secured the sword, he laid it on his chest as he recalled Ewan’s last breath…

Duncan hurled himself through the streets of Berwick with Ewan’s limp form draped across his shoulder. Blood gushed in warm streams down his back. Amid shrieks of agony and horror, Duncan pushed on, deflecting the swords of English soldiers and leaping over the bloodied mass of bodies, mounting in number like a flood overtaking the city streets. Whole families, snuffed out in an instant, lay in a puddle of death, arms still enclosed around each other, revealing the terror of their last moments as they clung to hope and prayed to meet in the hereafter.