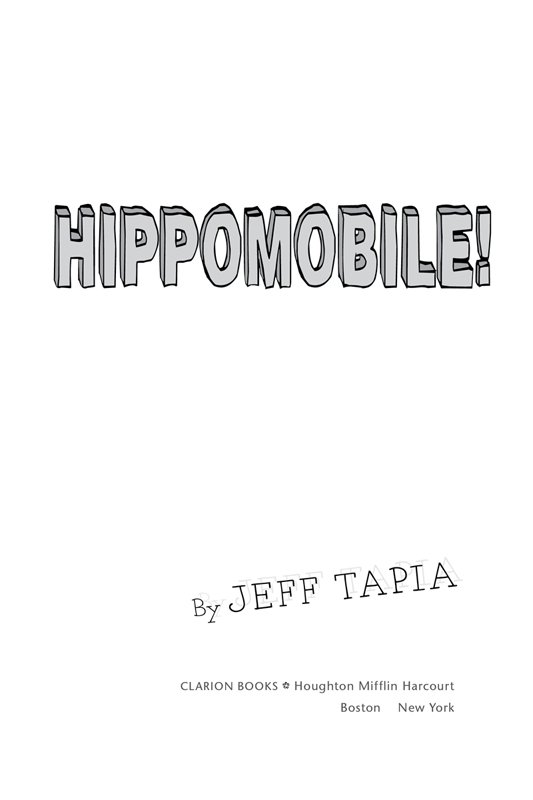 Once Upon a Time

“Let Me Call You Sweetheart”

Looking for Something to Look At

How to Yank a Doorknob

The Scribbles on the Wall

What a Difference a Day Makes

Summary: Ten-year-old twins Jimmy and Stella start a campaign to save their dying small town by restoring the amazing hippomobile, an old-fashioned vehicle made out of a horse wagon.

For Agnes and Eva 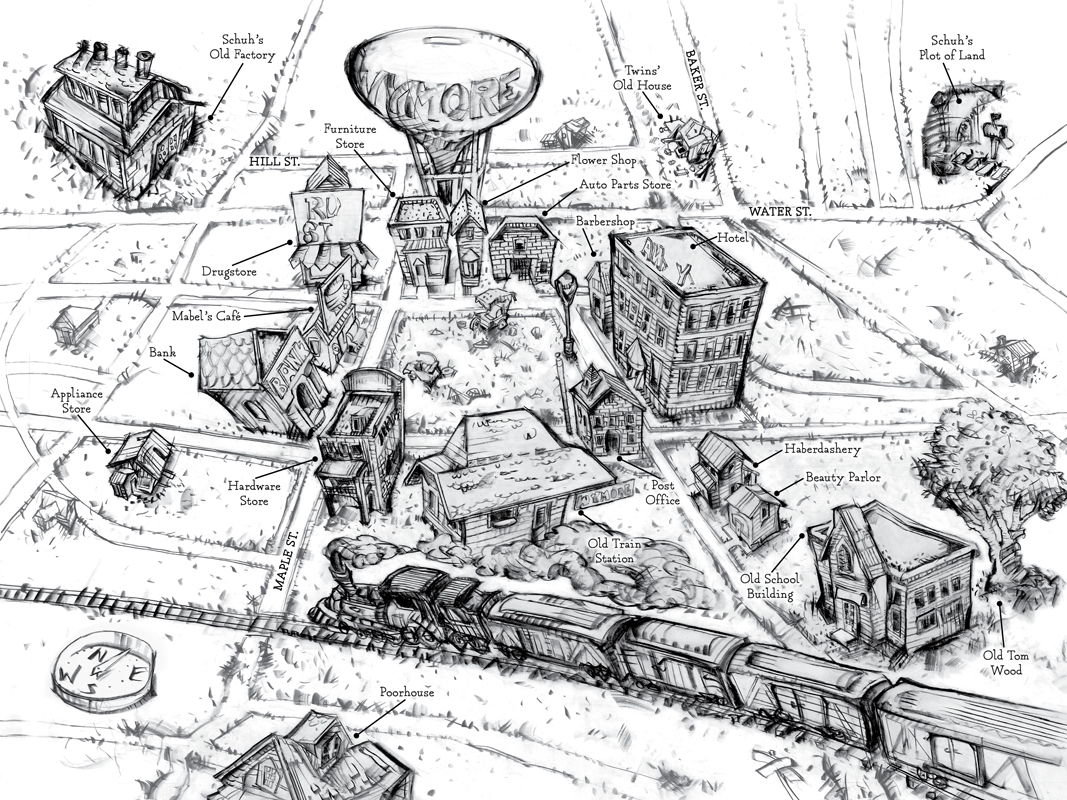 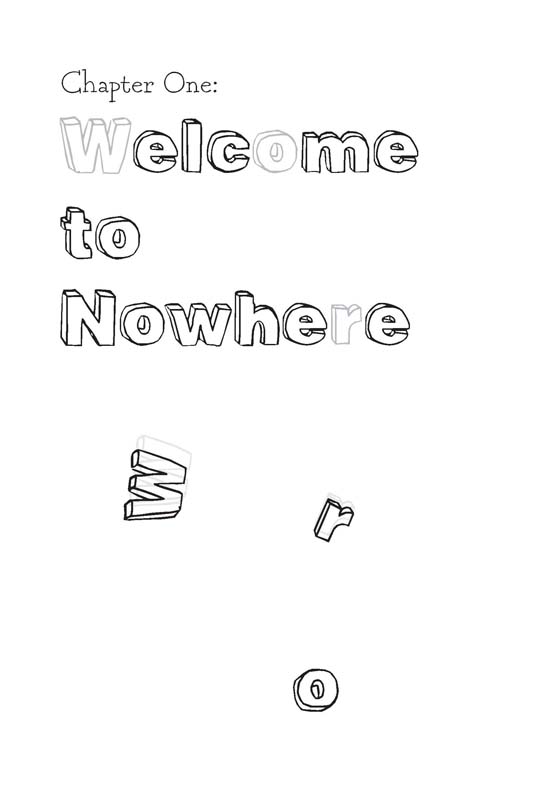 YOU AIN'T GONNA BELIEVE
this, but it's true. We're the last two kids in town. In fact, we're the
only
two kids in town. And what's more, since we're twins, it's almost like there ain't even two of us, even though there is. One of us is Jimmy and the other one is Stella, and we don't look too much alike, like some twins do.
1

We live in the town of Wymore, and Wymore is so small you might as well not even try to find it on a map. The official population is only fifty-one, and that number drops down to forty-nine in the summertime when Pops is on the road and Mom is working what she calls the graveyard shift far off in another county, and we're left here to live with our remaining forty-seven grandmas and grandpas.
2

Now, a long time back, Wymore had lots more people in it and a real train station where ladies in funny hats and gentlemen with long curly mustaches got off. There was also real stores where you could buy stuff, and even a shoe factory we're gonna tell you about real soon. For now, we'll just tell you that people used to travel right far to buy Gottfried Schuh's Everlasting Shoes. And on account of how far they had to go to get here, some of them folks would stay overnight at the one hotel in town. Back then it was glamorous and shiny as spit and called the Stanley Hotel, until over time the
S
, the
T
, the
L
, and the
E
on the sign rusted and fell off. Then it became the Any Hotel.
3
That's where everybody in Wymore lives now, and seeing that there ain't but twenty-five rooms, we've all got to squeeze together some and double up and just plain make do.

Last summer we lived in Room #9 because we were nine years old back then. Meanwhile we've moved across the hall to Room #10, and you can probably guess how come. The mattresses are worse there, and the pillows are harder, and the floor squeaks more, and there's no picture in the picture frame up between our two beds, but the screen in the window don't let in no bugs, and now we can overlook the whole town square. Not that much ever happens down there, but if it does, we ain't gonna miss it.

The hotel has three floors, and we're on the middle floor. And when it's not too hot and muggy at night, we sometimes climb up on the roof and pitch a tent. The roof's so flat that there ain't no chance of us rolling off it in our sleep. But for the longest time, Mom used to get the all-overs
4
about it because of how she was so scared of heights.
5
And so we just didn't bother to tell her when we went up there.

Sometimes we go and play in them old stores, though, especially in summer when days go by slower than a snail riding a turtle. The old furniture store is good for playing tag in on account of all the old busted tables and chairs you can jump over, and there's a rusty stove at the appliance store that we can bake a dust-and-pebble pie in if we feel like. Sometimes we go to the old drugstore and cough and sneeze and take our temperature with a twig under our armpit and swallow medicine we make ourselves by rolling up little balls of yellow newspaper.
7

Robbing the old bank is another way to pass the time around here, but our play money is running low and there ain't many grandmas and grandpas left who can stick 'em up, on account of how their arms just don't move easy anymore. Sometimes we go to the haberdashery and dress up in old, too big, ugly clothes if Grandpa Bert lets us. And sometimes we just think about how nice it'd be to go swimming, but Wymore ain't got a swimming pool. There ain't even a swimming hole somewhere. The town is all dirt and dust and wind and no water.

That leaves Mabel's. The cafÃ© is named after Grandma Mabel, and there ain't no one around who can swing a wood spoon like her. And alls you gotta do is taste her checkerboards
8
or her Bossy in a bowl
9
or a slice of her Eve with a lid on,
10
and you'll be a customer for life, if not longer.

Now, you might've noticed we ain't said nothing about there being a school in Wymore. Well, you would've noticed right, because there ain't one. There is an old school building one block off the town square, right next to the old oak tree everybody around here refers to as Old Tom Wood, but there just ain't enough kids around here to fill up a school, and so it long since closed its doors. Think about it. How would you like having just two kids in your class and one of them being your sister and the other one being your brother?

But that doesn't mean we get to not go to school. We go five long days a week, nine long months a year, just like you do. In fact, this summer we even got homework. And pretty soon Mr. Buzzard will be coming through town every morning bright and early in his yellow pickup
11
to collect us in front of Mabel's. We sit out back in a wore-out tire with our bait cans
12
in our laps, and he drives us over nine miles of back roads that give our bones a good rattling. School's up in a place called McFall. That's the big city around here, with the one traffic light and a general store.

But we still got some time left to laze about up in Old Tom Wood and ruminate over all that happened this summer. We know our teacher is gonna be asking us what we did, and we wanna be good and ready when she does. Because a summer like ours don't happen but once in a blue moon, especially them six days that changed the course of our lives and the lives of everyone else here in Wymore on account of something called a hippomobile. And here's the story the two of us wanna tell. 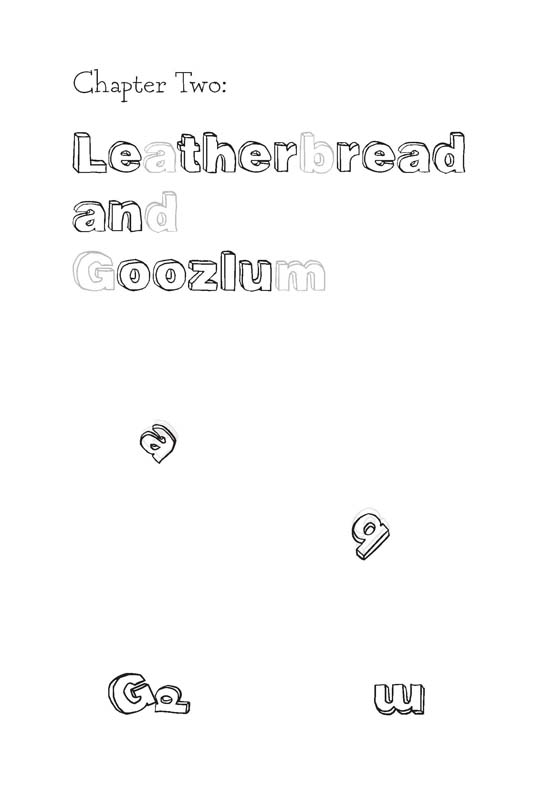 IT ALL STARTED AT
Mabel's one morning earlier this summer. We can't remember if it was a Monday or a Tuesday or a Friday, but it don't make much difference anyhow because the days are all the same around here.

We do know for sure it was morning, though, because we were sitting right across from each other in our favorite window booth
1
over steaming plates of leatherbread and goozlum and crispy overland trout. And if you're wondering what kinda food that is, alls it is, is pancakes, maple syrup, and bacon. But it tastes way better when you call it leatherbread and goozlum and overland trout, and if you ask us, you should take to calling it that yourselves.

Anyway, we were busy filling our shirts, and Grandma Ida, the waitress at Mabel's, came up to us and said, “You two sure do know how to play a mean knife and fork.” Which was her way of saying how hungry we ate. Then she asked us if we'd like another black cow.
2

So we wiped off our brown mustaches and then cleaned our plates until they shined so much they made you squint.

Autumn in the Vineyard (A St. Helena Vineyard Novel) by Adair, Marina
Dirty Wings by Sarah McCarry
Bombshell (AN FBI THRILLER) by Coulter, Catherine
Getting In the Spirit: a Sapphire Falls novella by Erin Nicholas
The Setup Man by T. T. Monday
Eric S. Brown by Last Stand in a Dead Land
Death In Hyde Park by Robin Paige
Atlantis Awakening by Alyssa Day
The Shadow Realm (The Age of Dawn Book 4) by Everet Martins
Dear Nobody by Berlie Doherty