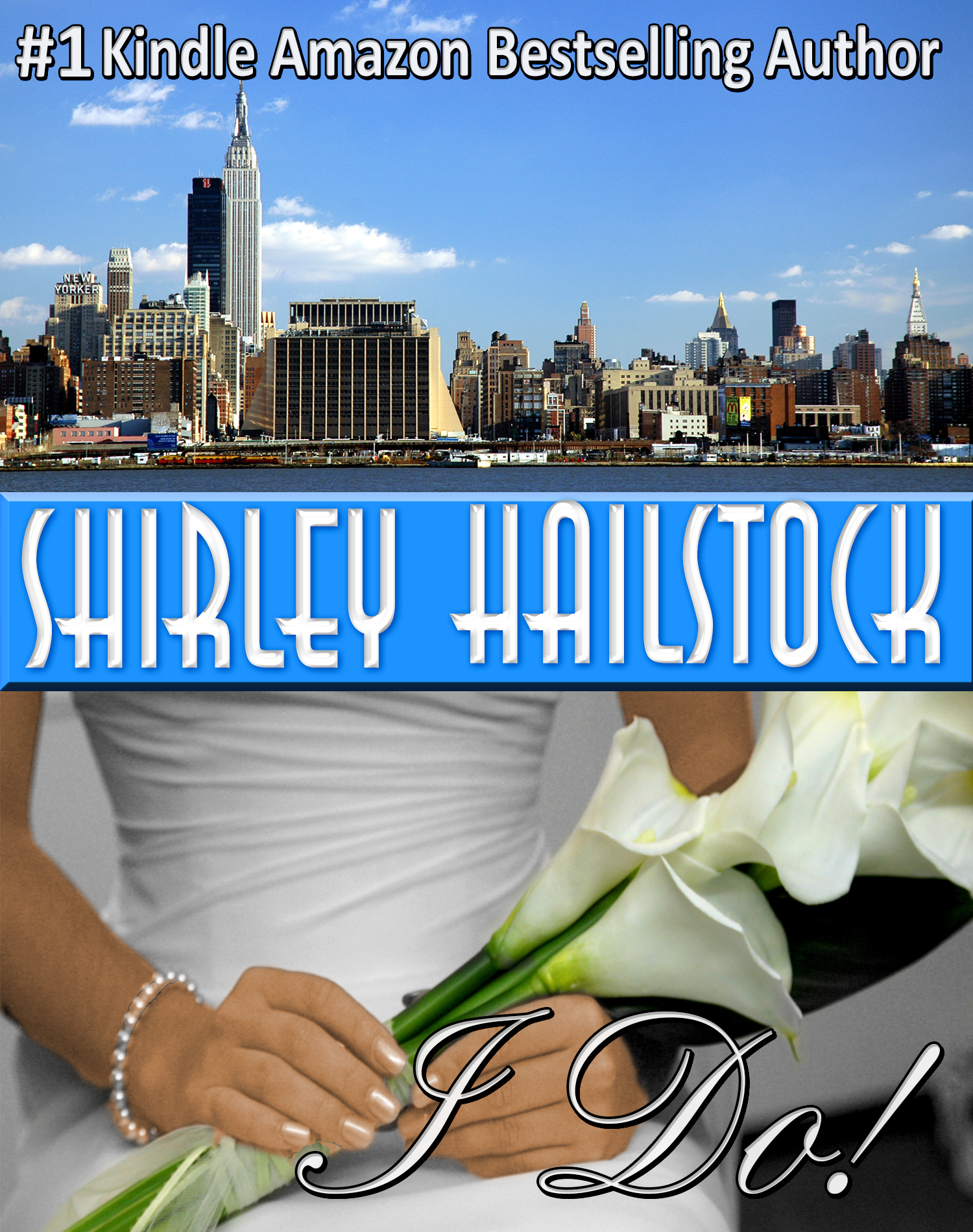 All rights reserved. Except for use in any review, the reproduction or utilization of this work in whole or in part in any form by any electronic, mechanical or other means, now known or hereafter invented, including xerography, photocopying and recording, or in any information storage or retrieval system, is forbidden without the written permission of the publisher: Shirley T. Hailstock PO Box 513, Plainsboro, NJ 08536-0513.

This e-book is licensed for your personal enjoyment only. This e-book may not be re-sold or given away to other people. If you would like to share this book with another person, please purchase an additional copy for each recipient. If you’re reading this book and did not purchase it, or it was not purchased for your use only, then please return to Smashwords.com and purchase your own copy. Thank you for respecting the hard work of this author.

Jarrod's knuckles touched her sweater's collar. Catherine jerked, as if he'd shocked her. He looked into her eyes. Dark as midnight, they smoldered. Jarrod grew warm, his body tightening in places that felt good. Cathy made him feel good.

He pulled on her collar and her head moved closer to his. Jarrod felt her breath on his mouth. He smelled the light fragrance she often wore—that underlying scent that made him want to growl—along with the champagne. He saw her eyelids droop, then close. Barely an inch separated them. He moved to eliminate the separation.

"No," Catherine said, turning away.

Jarrod took a deep breath and let it out in a whoosh that emptied his lungs. She was in his arms, her head on his shoulder, his arms around her. He could feel her body vibrating. He should let her go, but he didn't want to. This was what she did to him. She'd bring him to the brink and then set a limit.

To Jim and Nikoo McGoldrick for their friendship

To Jim and Nikoo McGoldrick, who write as May McGoldrick and Jan Coffey. They once lived in Newport, Rhode Island. While on my research trip to this wonderful play­ground of the rich and the super-rich, they kept in contact with me daily through e-mails, telling me places I must see and restaurants that had the most delicious food on earth. Thank you.

1-800-WIFE.
Catherine listened to her disguised voice on the special line she'd had installed when she came up with the plan.
Are your parents constantly pushing you to get married?
"Of course they are," she said out loud. "I'm not the only one this happens to." She applied mascara to her eyes as she dressed for another of her sister Audrey's parties. Sometimes she thought Audrey only gave these parties to set her up on another blind date.
Does every conversation with them begin and end with examples of the joys of marriage'?
"You guessed it, honey."
Well, so do mine. So if you're interested in details about ending that conversation, tell me about yourself. And don't forget to leave your phone number. I'll get back to you.

She heard the beep. The caller hung up. Catherine went to the machine and pressed the
PLAY
button. Frankly, it surprised her, the number of calls she received on the newly installed line. The first message started as she returned to her dressing routine. He hung up. The second did the same. The third caller started speaking. "Uh, my name's, uh. . ."

Catherine stared at her reflection in the mirror. It was an afternoon party; more than a picnic, less than a reception. All camouflage, she thought. She picked up the blush brush and added a few strokes to her cheeks, blending the color in an upward sweep.

The message ended, and a beep indicated another. Catherine had become adept at screening calls from the sound of a man's voice and the message he left about himself. She'd placed one ad in the
PERSONALS
section of the newspaper, and the phone rang at all times of the day and night.

A few crank calls came across the line, but most calls were genuine, men looking for meaningful relationships. That told her a lot about the state of marriage in America, or at least in Rhode Island, but she wasn't researching a graduate school thesis, and a life mate wasn't on her agenda either. She'd tried that route once. It hadn't worked. This idea was better.

She'd risked her heart on one undeserving man. She would never do it again. She wanted six months, nothing more, nothing less.

Another male voice stammered for a start, inter­rupting her thoughts. Catherine usually rejected the stammers. She wanted a man who was sure of him­self; someone she could present to her family and have them believe him and their charade. She lis­tened as he went into his story, which she knew would last longer than the tape allowed. As a rule, the stammers didn't call back to finish the call or leave a number where they could be reached. Of course, her caller-id would tell her the number.

Catherine stepped into a tight black dress, pull­ing it up from the floor. The fabric hugged her skin, clinging to it like a thick coat of paint. Stopping six inches above her knees, it would surely surprise her sister. Her married sister, she reminded herself. Flat shoes would be perfect, but Catherine put on her heels anyway. They added height and made the dress look even shorter. Man-hunter, she thought as she smiled into the full-length mirror. She donned the hat that only a character from
Hello, Dotty
should wear and started for the bedroom door when she heard the last beep.

"Catherine Carson." She froze. Her heart lodged in her throat. "It's wonderful to hear your voice, disguised as it is." Someone knew her name. "I thought you said you would never marry?" The voice had a smile in it, a mischievous sound that said he was well acquainted with her. She whipped around and stared at the machine. Who was he? His voice had a slight accent that didn't fit New England. She kept staring at the machine, unable to move, wanting him to continue so she could discover his identity, but also wanting it to end. She was anonymous. No one could know who she really was. The final long beep came, signaling that was the last message.

Catherine's throat was as dry as parchment. She wanted more. Who was that? She recognized the voice. Closing her eyes, she tried to place it. Quickly she crossed the room and hit the
REWIND
button. She stopped the machine at the last message and played it again. This was someone she knew, someone who knew
her
. Why couldn't she remember? Again, she closed her eyes and tried to picture every man she knew with a rough, sexy voice that reminded her of sunrise and mist on the summer ocean after a long sex-filled night.

Catherine suddenly shook herself. What was wrong with her? She hadn't had feelings like that since—she stopped. She wasn't going there. The engagement had been years ago. He was married now, and even if he wasn't, Catherine wasn't in the market for a man with no foundation for commitment. She looked at the caller-id. It was blank, erased, yet
she
hadn't erased it.

Fifteen minutes later, as she entered what she called her sister's palatial mansion, she was still thinking about that voice.

Audrey, two years younger than Catherine, had married her high school sweetheart, but not right out of school. Not until he'd made a fortune that could keep her in the princess style she wanted. She had it now—a fifteen-room house with a large yard, a pool, a tennis court, a solarium, and an outdoor Jacuzzi. Like their mother, Audrey thought every woman should be married. Catherine felt betrayed by her sibling.

She didn't immediately see Audrey, so she went through the house toward the solarium. The huge open room brought the outdoors inside, especially in winter. The walls were completely made of glass. Panes six feet high and six feet wide extended upward twenty feet, allowing light to nourish the jungle of plants that hung, sat, and decorated the room with many varieties and colors. The wall in front of her was movable, folding open like an accordion. Audrey had insisted they install it when she took the house. Beyond it was the veranda and sprawling yard. Tables with blue cloths and white napkins dotted the yard. Between and around them people stood in ridiculous hats talking and laughing. Catherine scanned the crowd.

"There you are." She turned to find her sister behind her. Audrey looked her up and down. Cather­ine turned completely around, parading up and down several feet, as if she were a runway model showing off the latest fashion. Audrey shook her head. "Mom's going to have a fit, but the hat's nice." They both made faces. "I've got someone for you to meet."

Catherine groaned. "Not already," she com­plained. "I just got here. You can't be pushing me toward a man before I've had a drink."

"Today's a good day to start."

Audrey dragged her along. At the solarium door she stopped. "Look who's here."

Catherine stared across the lawn. The last man she expected to see stood smiling down at Emily Colter, Julianna Stone, Meredith Windsor, and Terry Burditt. Jarrod Greene had been her mortal enemy since she could remember. He'd spent the last five years in England. An architect by profession, he'd grown up next door to her, often playing practical jokes on Catherine, embarrassing her when she tried to impress someone, especially if that someone was male, and showing up at the most inopportune times, like now!

"What's
he
doing here?" She frowned.

"He got back three days ago."

"Three whole days, Audrey." Catherine raised an eyebrow and cut her eyes accusingly at her sister. "And he's already at one of your parties. That's got to be a record."

"Catherine." Audrey used their mother's tone. "I know you and Jarrod always fought, but he's a differ­ent man now."

Catherine interpreted that as meaning he was single. She doubted that he was a different man. Leopards never changed their spots. And she had no doubt that Jarrod was a leopard, one that attracted the opposite sex.

Judging by the harem sur­rounding him, he probably couldn't walk down the street without people leaving their houses to have a word with him. Women followed him around like dogs in heat. Why should she think anything had changed?

She looked at Julianna Stone. The expression on her face was priceless, rapture under a flapper's hat. Terry Burditt fluttered her eyelashes so often, Cather­ine thought she had something in her eye. Emily and Meredith had the same ridiculous looks on their faces. Catherine swore she'd never look at him as if honey dripped from his lips and she was there to lap it up.

"I suppose he's still single?" Catherine crossed her arms as she turned to her sister, putting Jarrod Greene's gorgeous body out of her line of sight