Read His Desire, Her Surrender Online 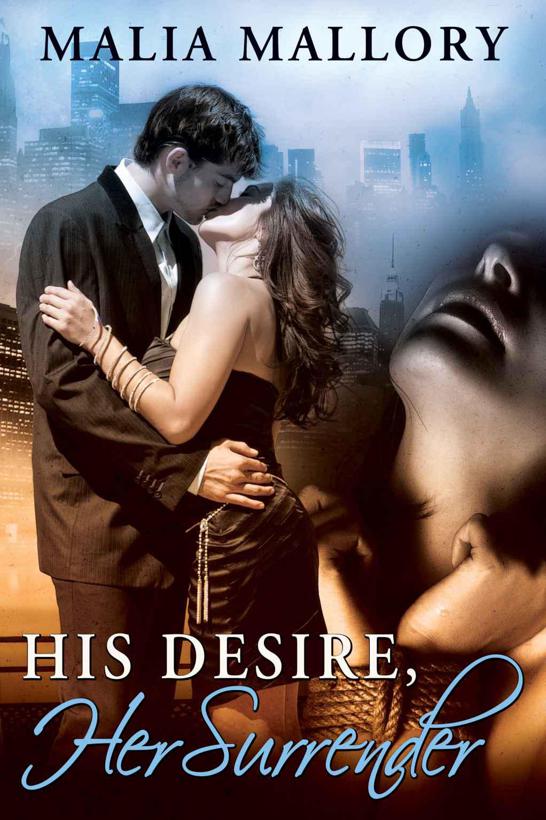 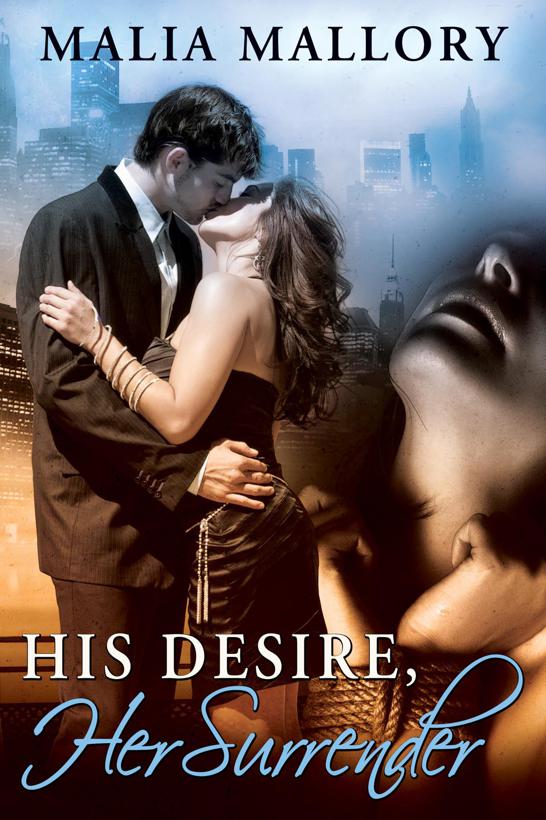 Tabitha Quinn's Hawaii vacation was anything but ordinary. Dominant billionaire Marcus Granger saved her life, swept her into his bed, and then left her heartbroken. Now she's back in New York, mourning the man she's sure she'll never see again.

Tabitha belongs to Marcus body and soul in bed, but she worries she doesn't belong in his high-stakes world. They've already dodged a murder attempt, and now Marcus is fighting off a competitor's takeover. When the rival company obtains critical information, suspicion falls on Tabitha. She has to prove she's innocent--and worthy to wear Marcus's collar.

All rights reserved. This eBook is licensed for the personal enjoyment of the original purchaser only. This eBook may not be resold or given away to other people. If you would like to share this book with another person, please purchase an additional copy for each recipient. If you are reading this eBook and did not purchase it, or it was not purchased for your use only, then please purchase your own copy. Even if you received this book free for promotional purposes, it does not grant a right of redistribution. Thank you for respecting the hard work of this author.

The characters and events portrayed in this book are a work of fiction or are used fictitiously. Any similarity to real persons, living or dead, is coincidental and not intended by the author.

This story contains sexually explicit material, and is intended only for persons over the age of 18. By downloading and opening this document, you are stating that you are of legal age to access and view this work of fiction. All of the characters involved in the sexual situations in this story are intended to be 18 years of age or older, whether they are explicitly described as such or not.

This story is a work of fiction and depicts fantasy situations. Safe sex practices are not always referenced. Please always be sure to educate yourself about safe sex before engaging in physical intimacy. Please do not try any sexual practice without proper knowledge and guidance.

Other Titles by Malia Mallory

What Readers Are Saying

Want to be the first to hear about new releases, giveaways and promotions? Sign up for my newsletter and receive a free ebook.

Tabitha had been back at work for two weeks when she finally managed to free her mind of Marcus for more than an hour at a time. People were still inquiring about her Hawaiian vacation, and she simply told them it had been lovely. It had been, right up until the end and that pesky little being abandoned thing. But what were you supposed to say when you'd been to Hawaii? People didn't boast of bad times in paradise, and she didn't care to elaborate on the details.

Tabitha wondered if Marcus thought of her. Her heart longed to see him and her body ached to feel him. She pushed him out of her mind again, but he kept sneaking back in.
Time
. That's what she needed. Getting through the days right now, today, tomorrow, and the day after, would be hard. Once people stopped asking about the trip, perhaps it would fade into distant memory.

Tabitha looked up as her co-worker, Kim, approached her desk. "Tabitha, can you take these copies to Conference Room C? There's a client waiting there."

Tabitha rose from her seat, welcoming the break. "Sure, no problem." She took the papers and made her way down the hall to the elevator. There were all sorts of bigwigs in the building today. With a major deal in the works, there had been scrambling and rushed document production.

When Tabitha reached the closed conference room door, she knocked gently. She waited a moment before opening the door and stepping inside. "I have your …." The words died in her throat as she saw the man seated at the table.
Marcus
. It was Marcus. Tabitha simply shook her head. Speech was beyond her.
Marcus
. The man who tormented her days and haunted her nights.

Marcus rose from his seat and approached her. "You didn't think I'd forgotten about you, did you, Tabitha? After all, I collared you."

Tabitha found her voice. "What?"

Marcus pointed to the choker around her neck. "You accepted my collar. Did you think that meant nothing?"

Marcus nodded. "Fair enough. But you're wearing it, aren't you?"

She was. Tabitha had been wearing it since he'd given it to her, only removing it to shower. She hadn't wanted to think about what that meant. Now he forced her to examine her actions. "It was a gift."

"It was, but it was also more. We have unfinished business, you and I, don't you think?"

Tabitha looked into his eyes. She traced the familiar planes of his face and her heart swelled.
Did they have unfinished business? Could she open herself to him again?
There was only one answer. "Yes … Sir."

Tabitha's mind reeled.
Had she just said what she thought she said?
Marcus was back without any explanation and she immediately capitulated.
What was she doing?
This was crazy. This man had ripped her heart out of her chest, discarded it, and she'd agreed to hand it right back to him.

Her hand unconsciously went to the black velvet ribbon at her throat. Her fingertip stroked the soft fabric of the choker and fiddled with the silver plumeria flower charm. He'd given her this collar. He'd given it to her in Hawaii, the place where they'd met, the place where she'd fallen headlong into a vacation affair that had turned into something much more. She'd accepted it, not recognizing its significance at the time. But it was significant. When he'd left her with barely an explanation and she hadn't known if she would see him again, she'd still worn the choker as a symbol of their connection. Some part of her deep inside had been wishing, hoping, craving him, his touch.

Now he was here. In New York. At her workplace.
What was going on?
As her mind cleared, her heart slowed and rational thought returned.

"Marcus, what are you doing here?"

"I'd love to say I'm just here to see you, but that wouldn't be honest. I have business here. Your firm is doing work for my company."

Tabitha's mind searched through her law firm's client list. "What? Wait a minute. Granger. Granger Pharma? Are you that Granger?"

"That Granger is my father, but I am a Granger."

"I didn't realize." Embarrassment roiled through her. She'd suspected Marcus was well off, but she'd never suspected this. Marcus's family had founded and still controlled Granger Pharma, a company with interests ranging from health and beauty products to medical research. She'd heard that they had even branched out into solar technology.

Her eyes swung back to him. "For?"

"Everything. I handled things badly. When I found out what happened, it drove everything from my mind." He reached for her hand.

"You remember that conversation I had with my sister, about the company investing money in her idea?"

"Yes." Tabitha's mind traveled back to that evening in Hawaii. The hostess had seated Marcus and his sister at the next table. Though her meal had been a tasty distraction, she'd been unable to ignore their heated conversation about work.

"Monica had a backup plan in case she didn't get what she wanted. She's been helping gather proxies for an upcoming shareholders meeting. There's a proposal on the table for Granger to merge with another company. The offer has been around for a while and essentially rejected by the board. A vote was scheduled as a formality. It had no real chance of passing, so it wasn't a concern."

"She's got proxies to force the merger?" As Marcus ran his thumb over her palm, her body responded. Anger and hurt couldn't suppress her instinctive reaction to him.

"She's trying anyway, and Coron Health has been buying up shares. Apparently, if the merger goes through, her proposal will get the support she wants."

"Wow." Tabitha shook her head. Her impression of Marcus's sister hadn't been positive, but she'd never imagined this.

"The board fired her. My father is furious. It's a fucking mess." Lines of tension creased Marcus's forehead.

Tabitha squeezed his hand. "I understand."

His offered her a regretful smile. "You shouldn't. It occurred to me on the plane that I had been a total jackass. At the time, I couldn't begin to articulate the situation. I didn't even know the full story, but I still shouldn't have left things as I did."

Tabitha said nothing. Her thoughts raced in a whirlwind. His leaving, her heartache and worry mingled in her mind. For the moment though, his physical presence soothed the ache his absence had created.

Marcus gestured toward the plumeria choker around her neck. "We both know Hawaii wasn't just a vacation fling. It wasn't for me, and I don't think it was for you, either. Otherwise, you wouldn't still be wearing my collar. I know it was symbolic, but it meant something."

Dirty Little Freaks by Jaden Wilkes
A Gift from the Past by Carla Cassidy
Continental Divide by Dyanne Davis
The Diary of Geza Csath by Geza Csath
THE BEAST OF BOGGY CREEK: The True Story of the Fouke Monster by Blackburn, Lyle
Chalice of Blood by Peter Tremayne
Ride Hard (Condemned Angels MC Series #2) by Heather Leigh
The Orphanmaster by Jean Zimmerman
I Thee Wed by Celeste Bradley
The Plague Years (Book 1): Hell is Empty and All the Devils Are Here by Rounds, Mark