Read His For Christmas Online 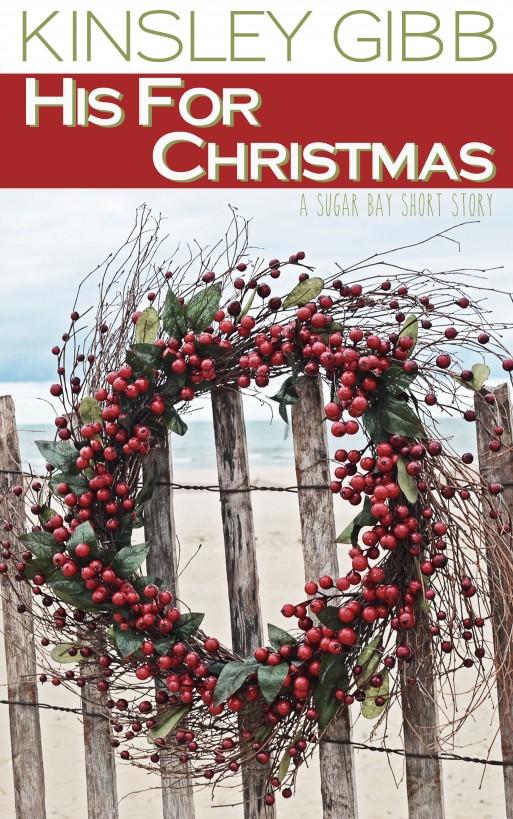 His For Christmas
A Sugar Bay short story - #1.5

His For Christmas Copyright 2014 Kinsley
Gibb

All Rights Reserved. This copy is intended
for the original purchaser of this book. No part of this book may
be used, reproduced, scanned, or distributed in any manner
whatsoever without written permission except in the case of brief
quotations embodied in critical articles or reviews. Please do not
participate in or encourage piracy of copyrighted materials in
violation of the author’s rights. Purchase only authorized
editions. For information contact; address
www.kinsleygibb.com

This book is a work of fiction. Names,
characters, businesses, organizations, places, events and incidents
either are the product of the author’s imagination or are used
fictitiously. Any resemblance to actual persons, living or dead,
events, or locales is entirely coincidental.

To my kids for their continued support in
this crazy adventure of a writer’s life…love you three to the moon
and back.

Excerpt from His Kind of Perfect -
Chapter 1

Excerpt from His Kind of Perfect -
Chapter 2

Excerpt from His Kind of Perfect -
Chapter 3

Other books by the Kinsley
Gibb

Thank you for reading His For
Christmas. I hope you enjoyed visiting with my friends from Sugar
Bay. Reviews help Indie Authors connect with new readers. Please
consider leaving a review to help readers find the Sugar Bay
series.

His Kind of Perfect – Anabelle and
Derek - available now

His For Christmas - available
now

Derek froze in the middle of
placing the miniature chandelier in place. He was in his workshop
with his two nieces working on the miniature while his sister
finished up some accounting in the front.

“Hand me the glue, will you
Esme?”

“Okay.” His four-year-old niece
sat next to him on the workbench. Her red and white stocking
encased legs pumped in time to the beat of ‘Old Saint Nick’ playing
in the background.

“What did your mom
say?”

“She said, of course Santa was
real, but we wanted confirmation from another adult. So is
he?”

Two golden brown eyes looked at
him with hope.

Alex exhaled in relief. “I knew
it.”

Esme’s reaction was similarly
heartfelt and he lifted his head from the delicate work at hand and
grinned. “Were you worried?”

“Sort of. Davey
knows a lot and when I heard Alex fighting with him, I got worried.
Plus Alex was so mad I thought she was going to kick him in
the
you know what
.”

The last part was delivered in a
stage whisper with rounded eyes.

“So did you?” He asked Alex who
was now focused on stacking the scraps in front of her in a
precarious tower.

“No.” Disgust evident in her tone.
“Mommy broke up the fight and told Davey it was best he went home
because blood stains were a pain to remove.”

“Your mom said that?”

“Your mom is a smart woman.” His
middle niece was feisty. There was no way she’d let someone get
away with injustice. Even if she didn’t fully believe in Santa, she
would’ve been pissed at anyone trying to spoil the magic for her
little sister. At last, he finished the installation of the tiny
chandelier.

“Alright, who wants the
honors?”

“On the count of three, Alex, you
hit the overhead lights and Esme, you hit this switch,
okay?”

The light was switched off, the
model house lights were switched on. The effect was
magical.

“Anabelle is going to love it.”
Alex added as all three of them looked at the result of weeks of
hard work.

Initially the idea had been
Esme’s. She’d requested a Barbie dream house for Christmas and was
insistent that Anabelle would like one as well. They’d compromised
on a custom big girl dream house for Anabelle instead and so their
quest began. Like a stalker through her Pinterest boards, he looked
for images of her dream house. He sketched out a floor plan and
stacked the floors to maximize the footprint and gathered wood
scraps to use. With assistance from Alex and Esme he’d pieced
together the elements she loved. His eldest niece, Janie, pulled
together materials and fabrics based on Anabelle’s favorite colors
and with balsa wood and a thread, she’d created custom furniture.
They’d sanded, painted and glued during his limited free time when
Anabelle wasn’t around. Today marked the end with the lighting
finale. It was three stories of detailed craftsmanship and his plan
was to present it to her Christmas morning one week
away.

His phone alerted him to a new
message from Dani.

“Stay here and be quiet for a
little bit, okay? We have a little problem.”

Derek rushed to the reception
area, grateful the workshop was a distance from the studio
entrance. He didn’t want Anabelle walking in on her surprise before
Christmas. He found her leaning against the transaction counter
that hid the mess his sister was prone to making at her desk. For a
moment, he appreciated the curves accented by Anabelle’s
position.

“Hey sweetheart!” He wrapped her
in his arms, loving the way she felt. “You look beautiful, is this
a new outfit?”

“I was just asking her that,” Dani
said, her eyes a little wild.

“What about the shoes?” His girl
had a thing for sexy shoes.

“Oh. Okay.” Dani look at him for
direction.

“What’s going on?” Anabelle
narrowed her eyes at him.

“Nothing. Absolutely nothing.”
Dani’s voice had risen in pitch and Derek shook his head at his
sister.

“Come on
Anabelle. Ignore Dani, she’s had too many red bulls today.” He led
Anabelle away. His sister was no good under pressure and it was a
good thing she was getting her PhD and not her MD. The stress of an
ER rotation would have killed her. “Dani, why don’t you take a
break
in the back
and eat something.”

He gave Dani a look and hoped like
hell she understood she needed to go watch the girls. He led
Anabelle to his office in the opposite direction from the back
workshop and closed the door behind them. He locked the door and
grinned at Anabelle’s raised eyebrow. He pulled her toward his desk
and leaned against it. He snaked his hands around her hips to palm
her bottom, pressing her more fully against him.

“So how about a real
greeting?”

She fiddled with the buttons on
his rolled up plaid shirt. “Well, I don’t know. I feel like y’all
are hiding something from me.” She gave him a knowing
look.

He nuzzled behind her ear in a
spot he knew she found incredibly sensitive. He was rewarded with a
delicate shudder and grinned against her neck. “And does that
bother you?”

“Since Christmas is a few days
away, I’ll assume it’s a top secret project.” She pulled back to
eye him. “Am I right?”

“Possibly.” He pulled her close
and rained feather kisses on her nose, along her cheekbones and
under her jawline. She tilted her head and let him play.

“Okay then,” she said and sighed
when he hit a particular spot. “I’ll be patient.”

“Excellent plan. Because you know
what they say, don’t you?”

“Good things come to those who
wait.” He brushed the scruff on his chin along her neck. She
adjusted her angle to give him better access. He bit her gently
then pressed a kiss against the hurt. She shuddered.

“Is that what they
say?”

“Yep.” He tugged down the neckline
of her top and pulled back to admire her creamy skin.

“What else do they say?” She
gasped when he pulled her demi bra cup down and exposed a
breast.

“Patience is a virtue.” He nuzzled
the soft skin and tasted the dusting of freckles on the slope of
her breast. “Reminds me of brown sugar.” Her hands came up to hold
him to her.

“Uh-huh…you know what else they
say?

“No, sweetheart.” Kiss. Suck.
“What do they say?” He laved her nipple with the flat of his
tongue. Swirled the tip before he engulfed it fully into his mouth.
She tugged his hair and he knew she enjoyed their love play. He
loved how sensitive her nipples were.

“They say a happy girlfriend makes
for a happy relationship.” He grinned against her breast and
continued the torture. “So if you don’t stop teasing me and start
kissing me like you mean it, you might run into some
trouble.”

This time there was no soft foray
into play, no gentle lead in. This time the kiss was all hot
tongues, gasping breaths and frantic moans. It was Anabelle doing
her best to climb Derek’s lap to feel his hardness against her damp
panties. It was grinding heat. It was the palming and weighing of
her breasts, the pulling of shirts out of her skirt, out of his
pants so skin against skin could be felt, could be enjoyed, could
be savored. It was filled with want, with need, with wet and wanton
desire.

“Come on.” He pushed off the desk
and bunched up her skirt with desperate hands. He turned and lifted
her onto the desk, stepping between her legs. He pulled her to the
edge and pushed her knees apart.

“Anabelle,” he breathed against
her lips before he plundered them once more. “I love you so
much.”

He moved his hands along her inner
thighs until he encountered a silky barrier that he easily slipped
past.

Anabelle’s hands were busy with
his remaining buttons. She made quick work of them and tugged apart
his shirt. He groaned when she sucked his nipples and lightly
scored her nails across his stomach. She made her way south,
unzipped and released him from his confines. He groaned as she took
his cock in her hands.

Gently she played with his balls
and grazed a sensitive spot below. His head fell back. “Have
mercy.”

He dipped two fingers into her
honey and rubbed a lazy path around the engorged cluster of nerves,
skirting her most sensitive spot with each pass.

“Derek,” she breathed his name,
her mouth lax, her lips swollen from his kisses. He felt fluid leak
from his slit and squeezed his cock for control.