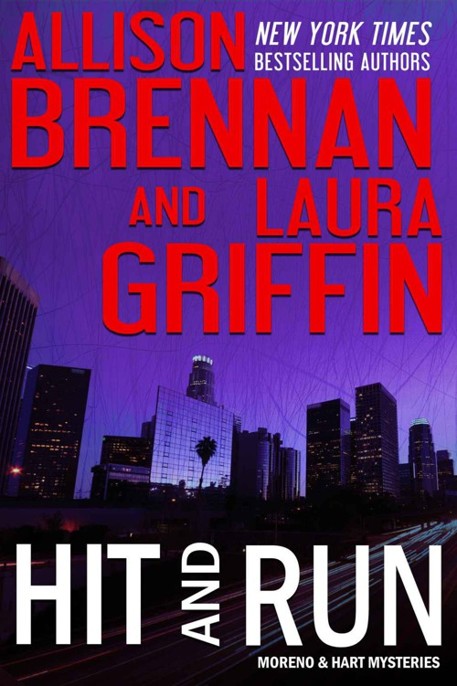 Praise for the Moreno & Hart series:

"Two gripping stories told by a pair of amazing talents merge into one fantastic book ... Impossible to put down." — Suspense Magazine

“If you enjoy strong women, fascinating men, and mysterious cases – then you don’t want to miss CRASH AND BURN.” — Heroes & Heartbreakers

“Be prepared to take a RIDE and you might want to hold on tight!” — A Tasty Read

“A fun, quick, exciting read that will keep you up late turning pages.” — RT Book Review

By Allison Brennan and Laura Griffin

All rights reserved, including the right to reproduce this book, or portions thereof, in any form without written permission except for the use of brief quotations embodied in critical articles and reviews.

This is a work of fiction. Names, characters, places, and incidents either are the product of the author’s imagination or are used fictitiously, and any resemblance to actual persons, living or dead, business establishments, events, or locales, is entirely coincidental.

Cover design by
The Killion Group

Interior formatting by Amy Eye,
The Eyes for Editing

Scarlet Moreno thought she was dead.

The pain was so intense she figured she’d bypassed purgatory and gone directly to hell. She was being raked over the coals, pulled by the rack, whatever inventive torture chamber the devil himself could devise.

She spent a minute or three or ten thinking about what she’d done to land her in the eternal fire. Was it when she lied to her dad about staying at Mandy’s house when she really went to an all-night party on the beach? Or was it when she’d told her mother she hated her when she was eight ... then again at sixteen ... then again at twenty-four? Or maybe it was because she was judgmental and held grudges longer than most people. Like, forever.

It wasn’t until she heard the sounds of the hospital that she considered that she might have been saved. That she wasn’t in Hell, at least not the eternal kind of hot spot. And then bits and pieces of the last few hours ... days? ... returned. Waking up in the ambulance, seeing Krista’s face. Worried. She was covered in blood. Scarlet asked her if she was okay, but the oxygen mask prevented her from being heard. Then waking up a couple of times to the lights and sounds of the hospital. But there had been no pain. She’d been floating. Seeing faces, familiar and strangers. A lot of badges.  And the voices.

Krista. “We got a call from Detective Stone ...”

Her dad had sounded scared, and her dad—retired LAPD Lieutenant Andy Moreno—did not scare.

She might have moaned. Her eyes opened, then she closed them because the room was so damn bright. She tried to swallow, but her mouth was totally dry.

“Hey.” She didn’t know if she spoke out loud, but her brother took her hand.

Slowly she opened her eyes. The room wasn’t as bright as she’d thought. It was a private room, full of machines. How’d she rate a private room? Cop shot in the line of duty? Hospital PR? She hadn’t lost her cynicism. Good.

John tipped a cup to her lips. She drank. She wanted more, but he wouldn’t give her more.

“You always wanted to be an only child,” she squeaked.

“I was joking.” She swallowed. “More water. Please.”

Other than the pain and a sick feeling in her stomach, the water helped her think clearly. Well, at least
clearer.

“Tell me what happened.”

“You were shot three times.”

“I remember that part.” It had been an ambush. She knew in her gut that she was supposed to be dead. That someone
wanted
her to die. But for the life of her, she couldn’t imagine
who.
“Officer Hart. Krista.”

“She saved your life.”

“That was your blood.”

Krista had stayed with her, called in the attack, kept her cool in a totally uncool situation. Scarlet remembered losing consciousness.

“I’m not dead,” Scarlet had said, and that was all she remembered.

“I told her to go home and shower. She’s been here twenty-four seven for three days.”

Scarlet tried to sit up but couldn’t. “I’ve been out for three days?”

“Two surgeries. Heart failure. Yeah, you’ve been wrung through the wringer. I need to call Dad.”

“Wait.” She gripped his wrist. Or, rather,
tried.
She was too weak. “Someone set me up. Someone tried to kill me.”

He didn’t say anything. But he didn’t look at her, either.

“Krista said Gabe had called you and asked you to check out the warehouse.”

Her heart skipped a beat. “Of course he did.”

“He said he didn’t. There’s no record of the call. Internal Affairs is all over this.”

Scarlet closed her eyes. Had it been Gabe who called her? It had been brief. Over the radio.

“Scar,” he said, using the nickname only he used for her, “can you check out an address for me?”

“A warehouse. I just want to know what’s going on. A favor for a friend of mine in Vice.”

She’d written down the address and said she’d call him later.

“He swears he didn’t call.” John’s words began to sink in.

“Scarlet,” John continued, “Gabe’s been here almost as much as Krista. Waiting for you to wake up.”

She didn’t say anything.

She didn’t say anything. She couldn’t. She’d done a favor for Gabe. Or so she’d thought. Not following protocol, but something that cops did all the time for their partners and friends. Just a little detour.

“Scarlet? You nearly died. You nearly got your trainee killed. What were you doing at that warehouse?”

Or someone who pretended to be Detective Gabe Stone.

Scarlet Moreno was already driving when she tried Krista’s cell for the third time. Again, it went to voice mail. She hung up without leaving a message. The first two “
call me back now,”
were clearly urgent.

“Dammit, Hart, where are you?”

Two hours ago, Krista had left the office saying she was going home to work on tiling her bathroom, a project that seemed to be taking three times longer than it should. But Scarlet didn’t say anything because she wouldn’t even attempt a home improvement chore. That would, of course, presuppose that she had a home to improve. She had no inclination to dump money into her apartment over Diego’s bar.

Scarlet considered going without back-up, but Krista lived in Huntington Beach, which was on the way to the rendezvous point outside Long Beach. She couldn’t imagine that LAPD cop Jason Jones had an ulterior motive in asking her to meet, but he’d certainly sounded scared.

“There’s no one else I can trust, Scarlet. We need to talk. Tonight.”

“Someone tried to kill me. I don’t want to talk about it over the phone. Just promise me you’ll come.”

Jason’s family had lived down the street from the Moreno’s. Jason and her brother, John, had been close friends—the same age, the same interests—and had even gone through the Police Academy together. While John had moved up in the ranks and now was a detective in Special Operations, Jason liked being a uniformed officer. He was good at it. He volunteered at a local youth center and talked to young kids about the dangers of gangs and drugs. Twelve years on the beat hadn’t destroyed his optimism.

Yet, something had freaked him out and he’d turned to her, not John. Why? Because John was a cop and she was a private investigator? Why would Jason need a PI? It made no sense. But Jason had sounded scared and he’d told her not to tell anyone, not even John, so she didn’t.

If Krista wasn’t home, Scarlet would do this alone. But her gut told her she needed back-up, and there was no one she trusted more than her partner.

Scarlet stopped her Jeep in front of Krista’s house because someone else was parked in her driveway. An all-too-familiar black Porsche 911.

Scarlet debated with herself for about two seconds before getting out of her Jeep and striding up the front walk of the money pit Krista had inherited from her grandmother. She rang the bell—several times—then started knocking.

Krista opened the door, both anger and worry on her face. “Scarlet?”

Krista wore a little black dress. By little, Scarlet meant short. Sexy. Hot. If Scarlet were gay, she’d be all over the blonde.

“Change into something that can conceal your Ruger. I need back-up.”

Krista almost blushed.
Almost
meaning she glanced down, then at R.J., then back at Scarlet.

“I tried calling first,” Scarlet mumbled. “I wouldn’t have come if it wasn’t important.”

“Give me five minutes,” Krista said.

Scarlet stepped in and closed the door behind her as Krista ran down the hall to her bedroom.

Spencer, the chatty macaw that Krista had inherited from her grandmother along with the house, made noise in his cage.

Scarlet ignored the bird and glared at R.J. He stared right back at her. Yeah, she could see why Krista had the hots for Drake Walker’s lead investigator. He was tall, dark and handsome with biceps to die for.

But he worked for
Drake Walker,
the defense attorney whose image was used in Webster’s Dictionary as the
definition
of slimy lawyer
.
Walker certainly couldn’t be trusted, which, de facto, meant R.J. couldn’t be trusted. And Krista deserved someone who didn’t lie, manipulate, or cheat. Scarlet had been trying to set Krista up with her brother for three years, but Krista wouldn’t have it. What could possibly be better than having her best friend as her sister-in-law?

It took Krista five minutes to return and neither R.J. nor Scarlet spoke. She’d put her hair back and had a baseball cap in the back pocket of her jeans. “Rain check?” she said to R.J.

The three of them walked out and Krista locked the door. Scarlet waited until R.J. drove off before she said, “Shit, Krista.”

“One date. Nothing more.”

“All it takes is one date.”

“Nope. Not having this conversation with you.” She put her hands on her ears to emphasize her point. “Tell me what’s going on.”

“Put your keys away. I’ll drive.” Scarlet waited until they were on the road before she said, “Do you remember Jason Jones?”

“Jones?” It took Krista a second, then she nodded. “Street cop from the Valley. Isn’t he friends with John?”

“That’s the one. He and his sister grew up down the street from us and the four of us used to hang out together all the time. He called me an hour ago and wants to meet. Made me promise not to call John. He thinks someone is trying to kill him.”