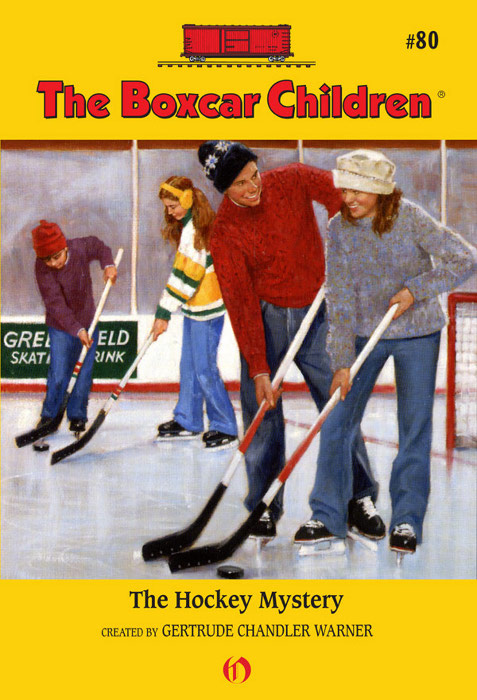 Chapter 1. A Hockey Star in Greenfield

Chapter 6. The Rink at Night

Chapter 7. A Surprise in Jessie’s Bag

Chapter 9. A Surprise for Jessie

CHAPTER 1
A Hockey Star in Greenfield

“He shoots—he scores!” Benny Alden shouted, racing down the ice. Although only six, he was a strong skater. When he reached the end of the rink, he threw his arms above his head and glided around in a circle, a victorious smile on his face. But a moment later he lost his balance and ended up sitting on the ice. “Ouch!” he said, getting slowly to his feet.

Benny’s fourteen-year-old brother, Henry, skated up next to him.

“Yeah,” Benny said. “I guess I need to practice a little more.”

It was open skating time at the Greenfield Rink, and the children were having a great time racing around the ice.

“I’ll help you,” Henry said, skating beside Benny. After the boys had circled the ice a few times, they decided to take a break. As they stepped off the ice, their twelve-year-old sister, Jessie, skated over. She’d been out in the center of the rink, practicing some turns. Their sister Violet, who was ten, joined them a moment later.

“Benny, I saw you zooming up the ice before,” Jessie said. “Who were you pretending to be, Kevin Reynolds?” she asked, naming her little brother’s favorite hockey star.

Benny’s face broke into a big smile. “I wish! He’s only the greatest hockey player ever!”

“I’m glad you think so,” said a deep voice next to them. The children turned to see a broad-shouldered blond man standing be- side them. When they realized who he was, their eyes grew wide.

“Kevin Reynolds,” the man said with a smile. He had friendly brown eyes and was wearing his Scouts jersey with the number fifteen on the back. Until he retired the year before, Kevin Reynolds had been one of the biggest stars in professional hockey. He had helped his team win the Stanley Cup five years in a row. He had been one of the leading goal scorers in the National Hockey League for ten years. And he had been chosen by the fans to play in the All-Star game twelve times.

“We’re the Aldens,” Jessie said. “I’m Jessie and this is Benny, Henry, and Violet.”

Kevin Reynolds put out his hand and shook each child’s hand firmly.

“What are you doing here, Mr. Reynolds?” Benny asked.

“Call me Kevin,” he said, his eyes twinkling. “I’m doing the same thing you are—skating.”

Benny looked confused. What was Kevin Reynolds doing at their little town rink? He was usually out on the ice with hockey greats like Wayne Gretzky—not regular people like the Aldens. “But why
here?
” Benny asked.

Mr. Reynolds laughed a deep hearty laugh. “I grew up in Greenfield,” he explained. “I learned to skate right here in this rink when I was just about your age.”

“That’s right,” Jessie recalled. “There are pictures of you and the whole Scouts team on the wall over there.” She pointed.

“We were pretty sad when you retired last spring,” Henry said.

“I’ve gotten too old to play professional hockey. Time to let some of the younger guys take over,” Mr. Reynolds said. “You kids look like pretty good skaters. Are you going to play in the hockey mini-league?”

“What mini-league?” Benny wanted to know.

“I saw a poster about that in the lobby—it starts next week and goes for about a month, doesn’t it?” Henry said.

“Yes,” said Kevin Reynolds. “I’m coaching one of the teams—for twelve-year-old girls. My daughter, Catherine, is on it.”

“Hey, I could play on that team,” Jessie said.

“I thought you only liked figure skating,” Benny said to Jessie.

“It’s never too late to try something new,” said Jessie.

“That’s right!” said Mr. Reynolds. “Many of the kids in this league haven’t played before. And I’m looking for an assistant coach. Henry, I saw how well you worked with Benny—how about helping out on my team?”

“Hey, what about me?” asked Benny.

Kevin looked at Benny thoughtfully. Then he squatted down so that his face was on Benny’s level. He placed his hand on Benny’s shoulder. “There’s no team for your age group, but I’d be happy to give you some skating lessons after Jessie’s practice is over.”

Benny was so excited that he didn’t know what to say. The other Aldens laughed, because they’d never seen him speechless before.

“Great, then it’s all settled,” he said. “I’ll see you here next week,” Kevin called over his shoulder as he skated away. “Six A.M. sharp!”

“If you’re going to play hockey, you have to get used to getting up early for practice,” Kevin said. “That’s when the rinks let us use the ice.”

The Aldens couldn’t wait to go home and tell their grandfather they’d met Kevin Reynolds that day. They quickly packed up their things and headed back to their house.

After the death of their parents, the Aldens had run away and lived in an old boxcar they’d found. But as soon as they learned that they had a kind grandfather who was looking for them, they came to live with him in his big house in Greenfield. Their grandfather had even moved their old boxcar to the backyard so they could still play in it.

When they got home, Grandfather was sitting in the library in his favorite big leather armchair. He looked up from his book when the children came in. “How was skating?” he asked, putting the book aside.

“It was great!” said Jessie.

“You’ll never guess who we saw at the rink!” cried Benny. But without giving Mr. Alden a chance to guess, Benny added, “Kevin Reynolds!”

“Yes, I remember reading something about that in the paper,” Grandfather said. He picked up the
Greenfield News,
which was folded on the side table, and looked at the front page. “Here it is,” he said, reading a headline aloud,
“‘Hockey Star to Build New Ice Rink in Greenfield.’”

“It says here that they’re still working on the plans, and then the town council has to approve them.” Grandfather’s eyes moved quickly down the article. “It also says Kevin Reynolds is coaching a team in the winter mini-league.”

“And he’s giving Violet and me lessons!” said Benny.

A week later, the Aldens got up very early to get ready for skating. Henry had helped Jessie pick out equipment and hockey skates at the pro shop at the rink. She put all of her hockey gear into her skating bag, which already held her figure skates and skating dresses.

“Can’t you just wear your figure skates?” Benny asked when he saw Jessie putting her new hockey skates in the bag.

“No, hockey skates are different. They’re harder and more padded to protect your feet. Also, the blades on hockey skates don’t have teeth at the front, since you don’t need to do any jumps or spins,” Jessie explained.

Mrs. McGregor, their housekeeper, gave the children a hearty breakfast of eggs, toast with homemade raspberry jam, and orange juice. “You’ll need lots of energy for skating,” she said.

When the Aldens arrived at the rink, Henry went to find Kevin Reynolds and get ready for the team’s first practice. Benny and Violet went up to the bleacher seats to watch. Jessie headed to the locker room to change, her stick in her hand and her large skating bag slung over her shoulder. She stopped at the water fountain, set her bag down, and rested her stick on top of it. Then she bent over to get a drink.

She had just finished getting the drink when she saw a small woman with a bouncy brown ponytail and a cheery smile coming down the hall. It was Tracey Lippert, her figure skating teacher for the past five years.

“Hello, Jessie!” Tracey called out. “Are you here to start working on a new routine?”

“Hockey?”
Tracey repeated. “You’re joking, right?” Then she noticed Jessie’s bag with the hockey stick laid across the top and could see that it was not a joke. Suddenly Tracey’s face clouded over. “You’re playing on that mini-league team? The one Kevin Reynolds is coaching?”

Jessie nodded slowly, wondering why Tracey was upset. “Yes, I thought I’d give it a try.”

“Then when are you going to have time for your figure skating?” Tracey asked abruptly. 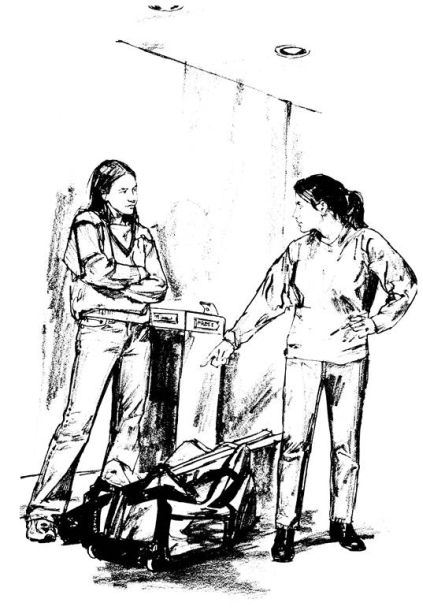 “You could have won a medal in the All-County Championships this year.”

“Do you really think I could have won a medal?” Jessie asked, her voice quavering. She’d never seen her teacher angry like this.

“Yes, you could have,” Tracey said. “You’re making a big mistake.” And with that she walked off, her ponytail swinging behind her.

“Wow, she certainly was upset about something,” said Violet, coming up behind Jessie.

Jessie stood stunned, looking after Tracey. “She doesn’t want me to play hockey.”

“Why not?” asked Violet.

“She says I won’t have enough time for my figure skating,” Jessie said. “But I don’t know why she was so upset.”

Violet looked thoughtfully after Tracey. “I don’t know, either,” she said. She took a sip of water from the fountain.

Jessie picked up her stick and hoisted her big bag over her shoulder.

“Want some help getting your equipment on?” Violet asked.

“Thanks.” Jessie smiled. “That would be great.” Together the two girls entered the locker room.

Jessie set her bag and stick down in front of an empty locker and began taking out her various pads and pieces of clothing. There were so many! She was used to wearing just a little dress and tights when she skated. But now she had to wear pads to protect her from being bumped by other players or hit by sticks or the puck. Over the pads, Jessie pulled on her practice jersey. She felt big and awkward. “I hope I’ll be able to move in all this stuff!” she said with a laugh.

Henry was on the ice, talking to Mr. Reynolds. Benny stood by the glass, watching. Even though it was so early, several men and women were sitting in the bleacher seats to watch the practice. Some were there to see their daughters skate. Others wanted to see Kevin, the hockey star, up close. A few were members of the town council, there to learn more about the man who intended to build the new rink.

“Coach Reynolds is about to start practice,” Benny called to Jessie.

Jessie made her way out to the end of the rink, where several girls had gathered around the coach.

A tall blond girl came up next to Jessie. “Hi, I’m Cathy Reynolds,” she said.

“Welcome to Greenfield,” said Jessie. “Where did you live before?”

“In New York City,” Cathy said. “We just moved here last week. Maybe you could show me around.”

“I’d love to,” said Jessie. “Greenfield is a great town. After practice I’ll take you to my favorite ice-cream place, The Scoop.”

“Sounds good to me,” said Cathy.

One by one, other girls emerged from the locker room with their hockey equipment. At last the whole team was assembled.