Read Home is the Hunter Online

Home is the Hunter 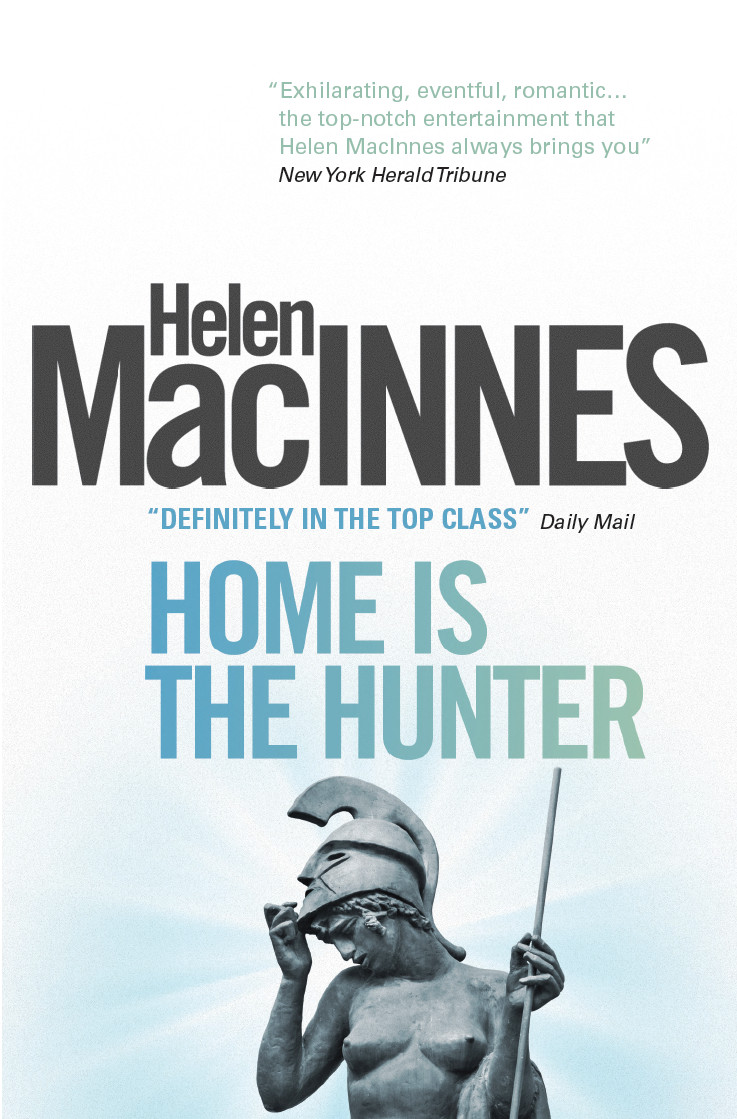 HOME IS THE HUNTER

AND AVAILABLE FROM TITAN BOOKS

Pray for a Brave Heart

While Still We Live

Neither Five Nor Three

Snare of the Hunter

I and My True Love

Rest and Be Thankful

Home is the Hunter

What did you think of this book?

We love to hear from our readers. Please email us at:
[email protected]
, or write to us at the above address.

To the Angel who will appear, some day

(in order of appearance)

A hero of the Trojan War

One of the three maidservants in the House of Ulysses

One of Penelope’s suitors

Another of the suitors

THE PLACE IS ITHACA, GREECE.
THE TIME IS 1177 B.C.
THE ACTION OCCURS IN, OR NEAR, THE HOUSE OF ULYSSES, ON THE DAY OF HIS RETURN HOME.
ACT I
SCENE 1

On the road to Ulysses’ House. Dawn

The same. Later that afternoon

The same. That evening

By the dim light of dawn, just beginning, we can see a small shack huddled at one side of the stage, but everything else is shadowed and dark. Across the stage, a spot of light strengthens, and
ATHENA
,
Goddess of Reason, limps delicately into view. She wears a long white pleated robe as a Goddess should, but the long scarf attached to one shoulder is trailing, and the circlet of golden leaves on her high-piled hair is a little askew. She looks exhausted.

(Sighing, as she looks back over her shoulder)

Oh, come on, Ulysses! You’ve rushed all the way from the harbour, not a thought in your head, nothing but silly emotions. “I’m home, I’m home!” you kept saying. Then, “What’s wrong, what’s wrong?” you kept asking.

(Her voice changes from joy to worry, as she mimics
ULYSSES
,
who enters and halts, looking across at the shack. He is a tall man, handsome, in his late thirties. A long rough cape is pushed back from his shoulders, to show a simple tunic, a plain leather belt, an inconspicuous knife at his waist. He carries a battered hat in one hand.)

Well, you’re right on both counts, my friend. You
are
home. And there
is
something wrong.

(
ULYSSES
walks past
ATHENA
,
quite unaware of her, for she is invisible to mortal men. The closest they come to seeing Reason is to listen to her, but her words seem only a part of their interior monologues, of the battle in their minds.
ULYSSES
halts again, eying the shack, frowning.)

Go on, Ulysses! Find out what
is
the trouble. But don’t blame me—I had nothing to do with it. I can’t deal with the irrational. I am only the Goddess of Reason!

(She looks down at her dress, then speaks to the audience with wry amusement, as she drapes the scarf back into place.)

Yes, I am Athena. But who would believe it after that mad rush from the harbour?

(She straightens the circlet of leaves.)

He wouldn’t listen to one word I said.—Or did he?

(For
ULYSSES
has pulled the cape around him, settled the hat over his eyes, stooped a little as he approaches the door of the shack.)

He did, he
did
listen!

(She smiles delightedly, steps slowly back into the darkness, merges with the deep shadows.)

(Silence. He takes a step toward the doorway.)

(The swineherd, who calls this shack his home, springs from the dark doorway with a knife in his hands. He is old, ugly, wiry, and dangerous. He circles slowly around
ULYSSES
.)

No, you don’t! Thought you’d sneak up on an old man and finish him off in the dark?

I was only looking for a place to rest... Why should I kill you? You haven’t much to steal—

That’s for sure. So why are you here?

I heard you kept the pigs and chickens for the big house up on the hill. Ulysses’ house.

There isn’t a pig left, and only a couple of chickens. You aren’t getting them! So clear out! That’s the road to the harbour! Do your begging in the village.

I didn’t come to beg.

So—they
did
send you to kill me. The way they killed Penelope’s servants, one by one, secretly, in the dark, and threw their bodies off the cliff. Then they told everyone the men had deserted, run off, taken a ship for the mainland and—

They? Who are
they
?

A bit of an actor, are you? Go on, start moving out.

(He gestures angrily with his knife.)

But I’ve just arrived, here, in Ithaca. Got off the boat this morning, an hour ago. I’m a stranger looking for—

You won’t find it here. What brought you sneaking along the shore to
my
door, anyway?

I was on my way to the Big House. I thought I’d get food and shelter, there. Ulysses always made any stranger welcome.

Ulysses isn’t there. Hasn’t been for years. Never did get back from the Trojan War.

But his wife, Penelope—doesn’t she still live there? She would give a stranger a place to sleep, some bread, and wine—

You’ll get more than that.

Insults and blows—if you keep your mouth shut. Death—if you try to help the lady Penelope.

Didn’t anyone tell you, back in the village?

They all seemed frightened. Wouldn’t say much... That’s why I came here. Thought I had better find out what’s wrong, before I went to Ulysses’ house.

(He crows with bitter laughter, sheathes his knife at his waist.)

Wrong... I could talk with you from now until sunset, and still wouldn’t have told you the half of it. Don’t go near that house. Get back to the harbour, take the first ship out. Get away from this island.

Why don’t you take your own advice? You could slip away, now. There’s a ship leaving this noon.

They?
Who
are
they?

It’s no business of yours. Get out, while you’re still alive. That’s good advice. It’s all I can give you.

Why don’t you come with me, old man? There isn’t much to keep you here.

Ulysses was my friend.

What if he isn’t?

Then he’d be here.

Perhaps he is as big a coward as he was a fool. Perhaps he heard of
them,
whoever they are, and—

(Whipping out his knife again)

You’re double my height and half my age, but you don’t call Ulysses a coward.

He was certainly a fool to stay away so long.

That wasn’t his choosing! He would never forget Penelope.

Forget her? No... Not that... He forgot time. So that makes him a very great fool—

No man calls him that!

You Are One of Them by Elliott Holt
Turn To Me by Tiffany A. Snow
A Time in Heaven by Warcup, Kathy
At Risk by Kit Ehrman
Falling for Heaven (Four Winds) by Conley, Anne
Damage Control by Gordon Kent
The Last Minute by Jeff Abbott
Struggling Free (Hidden Secrets Book 5) by Belden, P. J.
Great Exploitations (Crisis in Cali) by Williams, Nicole
A Major Seduction by Marie Harte