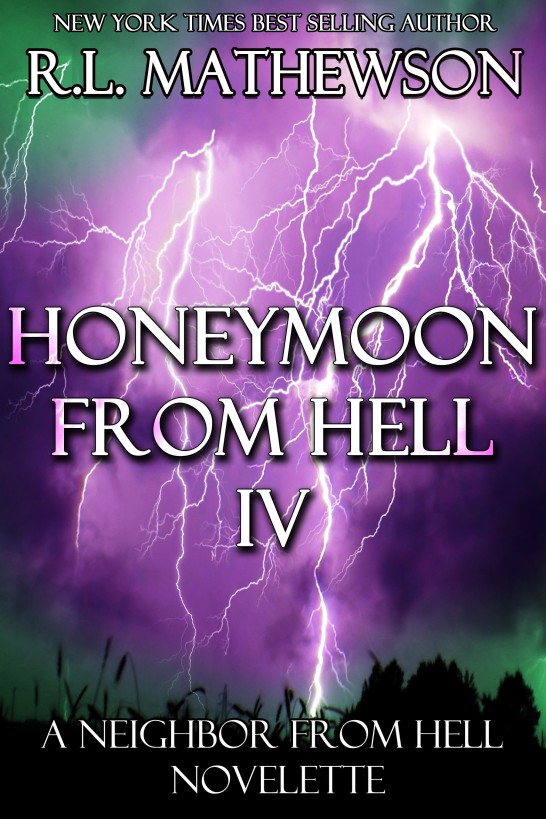 Other titles by R.L.
Mathewson
:

The Neighbor from Hell
Series:

Truce: The Historic Neighbor from
Hell

The Neighbor from Hell Collection
I

How to Write, Publish and All That Good
Stuff…

This is a work of fiction. All of the
characters, organizations and events described in this novel are
either products of the author's imagination or are used
fictitiously.

This book like every book that I have ever
written or will ever write is dedicated to my children, Kayley and
Shane, who have been with me on this journey from day
one.

Thank you for purchasing
this book.

Sign up for my newsletter
and receive the latest news about the Neighbor from Hell Series as
well as my other series at:

I’d like to start off by saying
thank you for all your support and kind words over the years. It’s
because of you that I am able to do be there and take care of my
children by doing what I love. So, on behalf on my children, I
wanted to say thank you.

Now, moving onto to this
mini-series. I never planned on writing the Honeymoon from Hell
series. It started off as a Chronicle or two on my website, which
is how I continue giving life to the characters that I’ve created
and fallen in love with. When I wrote a teaser about Jason and
Haley’s honeymoon I was hooked and immediately wanted to write the
whole story out as well as the honeymoons for the rest of the
Bradfords, but I wasn’t sure how it would turn out or if it was
even something that you would be interested in reading
about.

So, I decided that I would
write the series and release it in December 2015 after I was able
to get out the books that I promised you. At the same time iBooks
was doing what iBooks does best, helping self-published authors
like myself get a chance to show readers what they could do. iBooks
helped me out, gave me my real break and honored me with the first
title of Breakout Author, so I decided to make my already busy
schedule even busier and write this series early so that I could
say thank you to iBooks for everything that they did to me and
release this mini-series early through them.

Some readers are upset
about the wait, and I am sorry about that, but I wouldn’t be who I
am if I didn’t step up and show my appreciation and gratitude to
those who have helped me and my children when we needed help. With
or without this early release through iBooks, this series would not
have been released at Amazon.com or anywhere else before December
because of my workload, so please don’t feel slighted, because that
was not my intention.

Now, as for this HFH, you
will notice that the prologue is one of the last chapters of
Truce
. That was done so
that you wouldn’t need to go back and re-read the end of the book
to figure out where we left off. It also leaves you with the choice
to skip it and move on to the rest of the story.

With that being
said….

I hope you enjoy the
Honeymoon from Hell mini-series.

Other books by R.L.
Mathewson

(Just in case you forgot where we left
off…)

“You spoil him,” Mrs. Brown pointed out
with a smile as she carefully placed another apple pie on the table
to cool.

“He deserves to be spoiled,” Elizabeth
said, easily returning the older woman’s smile as she looked over
the pies she’d made to surprise her husband.

He was working himself into exhaustion.
Every time she pointed that out, he smiled and gave her a kiss as
he told her that she was well worth it. He promised her that things
would slow down in the winter and he would rest then, but she knew
that he was lying. He already had enough orders for furniture,
chests and a hundred other things to keep him busy during the
winter.

“He’s going to be upset when he finds
out that you were working,” Mrs. Brown said as she pulled another
pie out of the oven.

“He’s not going to be upset,” Elizabeth
said, knowing that was true.

Robert wouldn’t be upset when he found
out that she hadn’t stayed in bed like the doctor had ordered, he
would be furious, which was why she also made him some apple
pastries so that he would be too busy eating to yell at her. He was
such a hypocrite, she thought as she loaded a small tray with the
pastries with the hopes that they would be enough to soften him up
enough to take her for a walk.

It was okay for him to work himself to
death, but it wasn’t okay for her to do anything more strenuous
than to turn over in bed. She appreciated that he was concerned for
her, really she did, but if she had to stay in that bed for one
more day she was pretty sure that she was going to scream. She
needed to move around, to work, to go for walks, anything that
would take her mind off her huge stomach, the cramps that had
started yesterday and wouldn’t leave her alone and the fact that
she was bored out of her mind.

Taking a deep breath and praying that
the walk would help ease her cramps, she picked up the tray and,
unfortunately for her, waddled to the doors. It took her longer
than she would have liked, but she eventually made it to the door
and with Mrs. Brown’s help, managed to step outside. Murmuring her
thanks to the older woman, Elizabeth started the long process of
walking to the barn where her husband was hard at work building a
chest for the Fairchild family.

It really was a beautiful day. The
weather had cooled considerably over the past couple of weeks,
making it the perfect weather for enjoying the outdoors. She hoped
to be able to enjoy it before the baby came, along with the snow
that was sure to keep them trapped inside for most of the
winter.

A few steps later she was forced to
stop as a cramp tore through her back and stomach, proving her
point that lying around for the past month had done her absolutely
no good. She needed fresh air, sunshine and a bit of exercise. Once
the cramp had dulled down enough for her to move, she took a deep
breath and continued towards the barn, but she didn’t make it five
steps before another cramp tore through her back and stomach,
robbing her of the ability to breathe.

“Elizabeth?” a familiar voice said,
drawing her attention to the very handsome man walking towards her,
appearing surprised and pleased to see her. “Is that really you?”
James asked, placing his satchel on a bench by the rose bushes as
he walked past it on his way to her.

She opened her mouth to answer him, but
a choked sob escaped her as she lost her grip on the tray. She bit
back a cry as she cradled her arms around her stomach and leaned
forward, praying that she wasn’t about to lose the baby. It was too
early for the baby.

“Elizabeth?” James asked, sounding
worried as he rushed over to her and wrapped his arms around her as
best as he could, but she was rather large now, making the job
nearly impossible. “What’s wrong?”

She didn’t get a chance to answer him
before she felt a rush of liquid pour down her legs. It was quickly
followed by another one of those vicious cramps that left her
barely able to breathe. She reached up and grabbed onto James’ arms
as cramp after cramp tore through her body until all she could do
was scream the one thing that she knew would make it all
better.

“It’s beautiful,” Mr. Fairchild said in
a reverent whisper as he ran his fingertips over the intricate
design of the bassinet. “How much do you want for it?”

Robert chuckled as he placed the sheet
back over the bassinet to keep it protected. “Thank you, but it’s
not for sale.”

“Yes,” Robert said proudly as his gaze
shifted to the other covered furniture that he’d built for their
baby.

“The baby will be here soon enough,”
Mr, Fairfield said with a chuckle as he moved to kneel in front of
the chest that Robert made for the man’s future
daughter-in-law.

“Not soon enough,” Robert said, leaning
back to give the man some space to look over the chest.

Only a month more to go before he was
holding their baby in his arms, their miracle child and he couldn’t
wait. There were no words to describe how he felt about this child.
They were getting a second chance to be parents to this child and
he wasn’t going to waste it. He was going to-

-have a heart attack, he realized as
Elizabeth’s blood-curdling scream reached his ears. Before he
realized what he was doing, he was running out the door, barely
aware of Mr. Fairchild following him or demanding to know what was
wrong. The only thing that he cared about at that moment was
getting to Elizabeth and killing whoever was hurting
her.

When he ran out of the barn and into
the yard, terror shot through him as he watched a man hover over
Elizabeth as she curled up on her side as she screamed his name
over and over until he found himself running towards her and
tackling the bastard.

“What the hell did you do to my wife?”
he demanded as he shoved the smaller man to the ground and raised
his fist, ready to kill him with his bare hands when recognition
hit hard. “James? What the hell are you doing here?”

“Besides getting my ass kicked and
having your wife scare the living hell out of me?” James demanded
as he shoved Robert away and got to his feet. “I came to talk to
you.”

Elizabeth’s screams brought his
attention back to where it belonged. As happy as he was to see his
brother again and that he was speaking to him again, James was
going to have to wait.

“Minx?” Robert asked as he crawled over
to where his wife lay, curled up into a ball and panting. “What’s
wrong?”