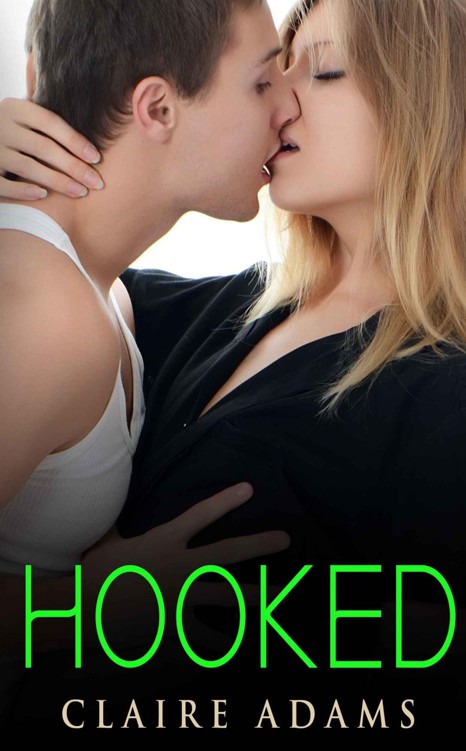 This
book is a work of fiction. The names, characters, places and incidents are
products of the writer's imagination or have been used fictitiously and are not
to be construed as real. Any resemblance to persons, living or dead, actual
events, locales or organizations is entirely coincidental.

Newsletter
:
–
Click
here to get an email as soon as the next book in the series is available.

During the next few days, I received several
different phone calls from past dance students. They were ready to get back to
work again, and they’d heard that I’d already purchased a new studio—above the
Goat Pub. How did they figure it out? I knew Wicker Park could be small, but
not that small.

Anyway, I was shocked to hear these words from my
past students. Did they really miss me so much, the way I missed them? Molly
Says Dance had been my entire world; it had been my reason to live. But I hadn’t
realized that my love of dance had flowed into the other women in my classes.
I’d assumed their mothers, their husbands, their sisters, their
whomevers
were forcing them into classes, and mine was the
cheapest on the block. I assumed that was the end-all, be-all of their devotion
to me.

Most notably, the over-fifty women were pleading to
get back. They were anxious about gaining weight, they said. They were feeling
the aching pain they’d had in the years before they’d begun dance classes.
“Just one day a week, for us?” one of the older women,
Rhetta
,
pleaded. I stood in my kitchen in my pajamas, pouring a bowl of cereal on the
table. My cat was rubbing against my leg.

“How does Tuesday afternoon sound?” I finally
answered,
my head spinning. I needed to get the place up and
running; I needed to go right away! But above all, I needed to make money. I
could lead a few classes a week, I thought, and make enough for rent next
month. As long as I didn’t have to call my mother and ask for help, I’d be fine.

My heart quickened in my chest. I dialed the phone
once more, dropping a few small cereal
niblets
to the
ground as I worked quickly. Boomer leaped from the couch and sniffed them with
a delicate nose.

“Hey, Mol.
What’s going on?” This was Mel on the other line. She was holding her baby,
Jackson, and Jackson was making small, cooing noises into the phone. My heart
lifted.

“Mel. Are you available at all this week?”

“Well. I’ve gone ahead with the dance studio—
“ I
began.

“Oh, yes. Wonderful! So you got the loan? Oh, so
this week we’ll be reorganizing, decorating.
All that?”

I thought for a moment, biting my lip. How could I
tell her about the loan? It was
like
an angel had come
out of nowhere and ripped the pain from my back. It was
like
I could finally live like a human again.
“Actually.
I’m going to teach a few classes a
week,
just to save
money for all that we want to change in the studio. We can make it just as good
as the last one, I think. We just have some effort to put forth. You know.”

“A class!
Already!”
Mel spoke. I could hear her adjusting the
baby on her hip. “When do you want me?”

“Tuesday evening, if possible.
The over-fifties.”

“Ah, yes.
The over-fifties.”
Mel paused for a moment. I blinked several
times,
worried she was going to bail on me, going to leave. “You know. None of this
would have been possible if it weren’t for your hard work.”

I blushed for a moment. It was quite rare that Mel
and I took a step back from goofing off or talking about boys to really
appreciate each other. “I couldn’t have done it without you,” I murmured.

We hung up the phone. I busied myself with cleaning
my house. I didn’t notice that I whistled while I worked, humming along with
the music that bumped from the small speaker on my counter. The air outside
brought strong winds through the window, and I had to close the glass quickly.
It was nearing Halloween, I realized. It was going to be winter soon. And I was
going to make it through another.

I had been thinking about Drew all during that week,
of course. He was constantly on my mind. Most notably, I was insane with
passion for the night we’d had together in the Jacuzzi. I could almost feel his
lips on my nipples, his mouth moving lower and lower on my stomach. I had to
shake my head over and over to remove the thoughts from my mind. I knew I
needed to get over it, to get over him. It was likely that he’d already found
another woman in the city to take out to Iowa, to make love to as the stars
glittered above.

I didn’t want to think about it.

On Tuesday afternoon, I nearly skipped toward the
new dance studio, preparing for my over-fifties class. I brought the old stereo
equipment; I brought several mats for before and after stretching (which was so
important for the older women’s muscles).

The door jangled to the pub as I entered. A few of
the regulars were sitting at the bar. I recognized all of them and nodded
toward them, smiling with such vivaciousness. Carol, the owner of the Goat Pub,
was behind the bar—not her usual place.

“Well, well.
If it isn’t our
lovely Miss Molly.
Molly Says Dance, everyone,” Carol announced,
bringing her hand forward to introduce me to everyone else.

They all lifted their great pints toward me and
nodded.

“What’s up?” Carol asked me as I sat at the bar,
grinning.

“You know? I think I’ll have a vodka tonic, just for
the afternoon. I have some jitters. I’m having my first class upstairs today.”

Carol’s eyebrows rose high on her forehead. “Ah. I
see. I didn’t realize you were already starting.”

“Me neither. But I’ve had so many
offers,
it doesn’t make sense not to try.” I grasped the drink in my hands, clanking
the ice cubes from side to side. “Tonight’s the over-fifty women.”

Carol laughed, rolling her eyes back in her head.
“I’m over fifty,” was all she said.

I hadn’t meant to offend her at all. I placed my
hands on the table and shook my head vehemently. “They’re all wonderful
dancers.
Truly.
I just have to group them like that
because—because the older women wouldn’t want to be with the younger
teenagers.”

But Carol just laughed again. “I might have to take
a peek tonight, if that’s okay? Maybe I could try my hand at the dancing. I
would even decrease your rent, if you gave the lessons to me for free.” She
winked at me, and I understood she knew I meant no harm.

I cleared my throat, my heartbeat slowing in my
chest.
“Of course!
Of course you can have lessons.
Anytime you please.”

Carol placed her hand on her hip. “Well. That’s a
relief. Say, you’ve drunk your vodka tonic quite quickly.”

I looked down at my nearly empty glass, my face
reddening. “I get nervous when new things begin.”

“We all do.” Carol gestured upstairs. “I think you
better start preparing for your new class, no?”

I nodded, pushing the bills toward her for the
drink. I felt embarrassed, but I didn’t know why. In some ways, this Carol
woman felt like my mother: like a lurking shadow, trying to protect me. In
other ways, though, she was far less scary. I felt comfortable talking to her;
like
I could say anything. I thought for a moment.

“Carol? Do you know of—have you ever heard of anyone
paying for somebody else’s loan?’

Carol eyed me, her beady eyes shining. “You had to
take out a big loan for that place upstairs, didn’t you?”

“Right.
Well. I’ve never heard of it, no.” She leaned down toward me, looking at me
fondly. “Looks like you have an angel watching over you, doesn’t it?”

I smiled, unsure of what to say. I nodded. “I guess
so.” And then I spun around, already feeling the alcohol revving in my head. I
rushed up the steps, toward the dance studio, hearing the constant
conversations of the men behind me, ever in the pub, a pint in their hands.

Finally, I reached the top of the steps to the new
dance studio. I’d forwarded the address to all of my over-fifty dancers, and
hoped they’d be able to find the place all right. I brought my legs forward,
trying to spin in a tight ballet circle. I found myself faltering, a bit. It’d
been a few weeks since I’d practiced, and I was already losing my muscle. I
closed my eyes, trying to focus. I walked toward the window, anxious to feel
the sun on my face. But the sun had dipped beneath a cloud, suddenly, leaving
all of Wicker Park in the somber fall shade.

I leaned down to touch my toes, feeling the stretch
in my shoulders and my back. I cracked my neck for a moment, feeling the
satisfying sound ricochet through my bones, and set up the music. We would need
something to stretch to, something to do the preliminary exercises to. I knew
the women would be out of shape, as well. We could all learn to come back to
dance together.

The footsteps began up the steps. I heard someone—an
older woman—calling out to Carol, saying she was going to dance class. My
stomach did a small flip. I could hear her jolting, one step at a time. I
wished that Mel
was
there already. Mel wasn’t usually
the late one; she was much better at speaking to the older women. I was good at
teaching them, at working them through the mechanisms. But I couldn’t ask them
how their weeks were going without feeling awkward. I felt far too young,
compared to them. It felt strange that they paid to be in my presence.

A shadow appeared at the door. I spun around,
placing a smile on my face.
Rhetta
, the woman who’d
called to set up an additional class, stood there. Her wild red hair spun in
all directions. I’d never asked her anything about herself, but there was such
a fire that glimmered behind her eyes that made me believe, beyond anything
else, that she was someone important. That she had people in her life
who
looked up to her. That she held an inner core of
strength.

“Hello, Miss Molly,” she grinned. Her teeth were
aged, stale. She walked forward and held her hands out, bringing me into a hug.
I felt such comfort in that embrace. I nearly felt like crying. “We were
worried about you. We haven’t seen you since before you announced you were
closing—“

“I know. I know. It all happened so quickly. My
landlord sold my last place without telling me.” I swallowed, trying to think
of something good to say. “But then I found this place. Do you think it will
do?”

Rhetta
glanced around her. The sun glinted on her face, showing small crags. “It’s
beautiful, Molly. Of course, it needs a little work. But I’m glad you decided
to fit us in today.”