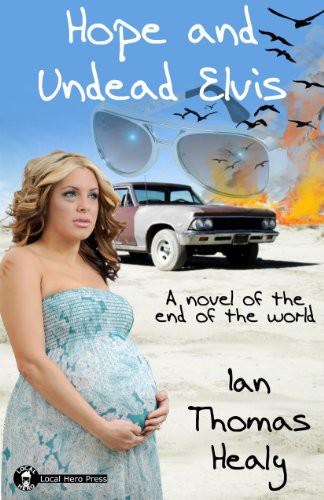 This ebook is licensed for your personal enjoyment only. This ebook may not be re-sold or given away to other people. If you would like to share this book with another person, please purchase an additional copy for each recipient. If you're reading this book and did not purchase it, or it was not purchased for your use only, then please return to
Smashwords.com
and purchase your own copy. Thank you for respecting the hard work of this author.

Image: Catholic Schoolgirl of the Apocalypse

Image: Undead Elvis of the Apocalypse

Chapter One: Hope and Undead Elvis

Chapter Two: Hope and the End of the World

Chapter Three: Hope and the Desert

Chapter Five: Hope and the Shepherds

Chapter Seven: Hope and the Test

Chapter Eight: Hope and The Way

Chapter Nine: Hope and the Bridge

Chapter Ten: Hope and the Night

Chapter Fifteen: Hope and the Forest

Chapter Eighteen: Hope and the Sisters

Chapter Twenty: Hope and the Smoke

Chapter Twenty-Two: Hope and the River

Chapter Twenty-Three: Hope and the Bear

Chapter Twenty-Five: Hope and the Homestead

Chapter Twenty-Seven: Hope and the Token

Chapter Twenty-Nine: Hope and the Blizzard

Chapter Thirty: Hope and the Casino

Chapter Thirty-One: Hope and The Deuce

Chapter Thirty-Three: Hope and the Pit

Chapter Thirty-Five: Hope and the Prison

Chapter Thirty-Seven: Hope and the Wheelchair

Chapter Forty: Hope and the Messenger

Hope and Undead Elvis
is not a typical Ian Healy story, and as someone who has read nearly every scrap of his work, I feel qualified to say so. I also know Ian well enough to say he's not a religious man in the slightest. And it's important to note this, because Hope and Undead Elvis is heavy on spiritual stuff. Hell, its heroine is a pregnant virgin, and Graceland becomes an Eden that our girl must reach on a road of Job-like trials. And those are only a few of the themes you'll find within. Readers who are familiar with the Bible will likely recognize even more, and because I'd had plenty of that stuff drilled into my head as a kid in Sunday school, I know most of them.

When Ian told me he wanted to try submitting this to publishers in the Christian market, I was opposed to the idea. Not because I'm a godless heathen, but because this is not a Christian story any more than
Lord of the Rings
is. It is perhaps more allegorical than Tolkien. In fact, it's probably more on par with the thematic work of C.S. Lewis, but only if C.S. Lewis himself wasn't trying so blatantly to sell his religion through his work. Ian didn't write this to proselytize or reflect his own godly principles (such as they are). Rather, he delved freely into the collective unconscious and pulled out archetypes that were old well before the time of Christ.

An author doesn't need to be religious to write about religion, and a reader doesn't need to be religious to enjoy a story about God and saviors and such. I enjoyed the hell out of this story, and pieces of it have stuck with me long since I handed him back the first draft with its few critical marks. God and Creation, for better or worse, are as much a part of the human fabric as much as our music and our beer. So sit back and enjoy
Hope and Undead Elvi
s for what it is. It's not a religious tale and Mr. Healy isn't trying to tell you something. This is just one author's weird and haunting little vision about the end of the world that just happens to borrow a few familiar bits to sweeten the pot. And I have to say, Undead Elvis is a pretty righteous dude.

One of the questions authors are asked constantly is "Where do you get your ideas?" Or, somewhat less frequently, "What were you smoking when you thought of this?"

With
Hope and Undead Elvis
, the idea germinated from a contest hosted by Jeff Hebert, creator of the
HeroMachine
character-creation application. The contest in question was to make a
Mad Max
-style post-apocalyptic character. I had just read Victor Gischler's
Go-Go Dancers of the Apocalypse
and wanted to do something in that vein. Thus came two images which I titled "Catholic Schoolgirl of the Apocalypse" and "Undead Elvis of the Apocalypse." Those two ideas wouldn't leave me alone, and it was only about a week before I sat down and typed out the first chapter of what would become a unique project for me. Those images are included after this Preface for those of you who have ebook readers with the capability.

At first, I imagined
Hope and Undead Elvis
as a tongue-in-cheek, babes-and-bullets type of romp through a post-apocalyptic setting in the vein of the movie
Six String Samurai
. By the end of the first chapter, I knew that this wasn't going to be the novel I'd write, and over the next several months
Hope and Undead Elvis
transformed itself from a lighthearted adventure into a highly allegorical reimagining of the story of Mary, mother of Jesus.

Marketing this book to potential agents and publishers proved to be the most difficult task of all. There isn't anything else out there like
Hope and Undead Elvis
, which means there isn't a pre-made audience ready to snap it up. That makes it difficult for agents and publishers to get behind, and the one common theme that stretched through my rejections was "We love this, but we don't see how we could sell it." Even my last-ditch efforts approaching Christian publishers were met with a love for the story and dismay at the prospects of selling it. I couldn't just let it sit, because I believe it is a very good tale and worth sharing, so I opted to epublish it and add it to my ever-growing library of online work.

No book can exist in a vacuum, and this one is no exception. I couldn't have done it without advice from my friend and former agent Ange Tysdal, who passed along a few useful suggestions and potential markets I hadn't known of before. And finally, I want to extend special, heartfelt thanks to my best friend and editor, Allison M. Dickson, without whose eagle-eyed enthusiasm for editing (she'll slap me for the alliteration there, I'm sure!), my work would be lacking in, well, pretty much everything that makes a good book.

Image: Catholic Schoolgirl of the Apocalypse