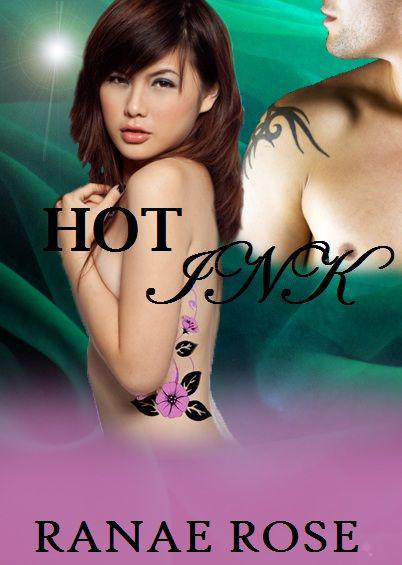 eBooks are not transferable. This book may not be sold, shared or given away. Doing so would be an infringement of the copyright.

This book is a work of fiction. All characters, names, places, businesses and events are products of the author’s imagination and are in no way real. Any resemblance to real events, locales or persons, living or dead, is entirely coincidental.

All rights reserved. No part of this book may be used or reproduced in any manner without written permission of the author, except in the case of brief quotations embodied in critical articles and reviews.

Warning: This book contains explicit sexual content and is appropriate for adult readers only.

A sensual shiver raced down Mina’s spine as Eric settled his hands on her side and metal hummed as the needle bit into her skin. It started as a dull burn and increased in intensity as the force of the tattoo gun sent vibrations through her ribs, hammering against them more times than she could feel, let alone count. Eventually he paused to wipe excess ink away with a clean towel.

“I don’t know how you can stand it,” Karen said, her auburn ponytail swinging around her jaw as she shook her head, pressing her fingertips to her temples. “Doesn’t it hurt?”

Mina wore her dark brown hair loose around her shoulders. She closed her dark eyes as the pain intensified and gave a ghost of a nod. The gesture was the best she could do considering that she was lying on her side, which put her cheek flush against the vinyl headrest of the tattoo chair. “Yes.”

Eric started again, keeping the towel at an arm’s length as he applied the gun to Mina’s ribs.

“Actually, I think I might pass out anyway.” Karen leaned against the wall, tilting her head back and closing her eyes.

Mina clenched her jaw as Eric hit a particularly painful spot. The tiny needle felt more like a chisel pounding away at her rib. “It’s not that bad.”

Karen opened her green eyes and narrowed them as she watched Eric labor over Mina’s side, carefully filling out the outline he’d inked into her skin days ago. “I’m not convinced.”

Mina was about to take back what she’d said when Eric stopped, mopping her side with the towel again. “Do you need to take a break?” he asked.

“I’m all right,” Mina replied. The large, ornate tattoo would never get finished if she took a break every five minutes. “I think Karen might need some fresh air, though.”

Karen shook her head. “I’ll be fine as long as you don’t come near me with that thing.” She eyed the tattoo gun Eric held as if it were a venomous snake that might strike out at her.

“Deal,” he said. “Though I can’t promise the same for Mina.”

Mina’s heart fluttered, and not just because the whir of the skin-piercing needle had started up again. The sound of her name escaping Eric’s lips captured her attention, distracting her from the pain of being tattooed – for a moment, anyway. She stole a glance at him, peering under her arm, which he’d instructed her to hold stretched over her head in order to keep her skin taut.

He was so hot. She hadn’t known that when she’d chosen him to do her tattoo. She’d browsed online for hours before finally selecting him because of the impressive work displayed in his online showcase. The website had included a picture of him, but he’d been bent over a client’s bicep, half his face hidden beneath a crop of short black hair that had just a hint of a wave to it. She’d forgotten her own name for half a moment when he’d introduced himself to her in the tattoo shop days ago, meeting her surprised stare with a pair of gorgeous sky-blue eyes. She’d been back almost every day since, and each time she went home sorer but happier. Her tattoo would be finished within the next few days.

Karen seemed to have recovered from her bout of squeamishness and was craning her neck, studying the partially finished design. “I have to admit, it’s going to look nice when it’s finished.”

“You should let me take some photos when it’s done.”

Mina nodded her consent. Karen was determined to eventually ditch her waitressing job and devote herself full-time to her photography, which she practiced constantly. Mina had been roped into posing for her dozens of times already. What was one more time, especially when she knew Karen wouldn’t take no for an answer?

“Maybe you could shoot me an e-mail with a photo or two,” Eric said. “I have a feeling this is going to be one of the best pieces I’ve ever done and it’d be nice to have some good images for my portfolio.” He stopped tattooing and pressed the towel to Mina’s side. “That is, if you don’t mind.”

Mina was just about to reply when Karen spoke, her ponytail whirling like a helicopter blade as she nodded. “I’d be glad to send you the images. Make sure to give me your e-mail address before you leave.”

“Take a card. They’re right there.” He motioned toward a small stack of business cards that rested on the half-wall that divided the booth from the rest of the shop.

Karen snatched one and eagerly stuffed it into her purse. Mina recognized the gleam in her friend’s eyes. It was the same look she got every time she scented a whiff of possible publicity in the air. She’d take any opportunity to get her work out there where it could be seen, even in the smallest of venues, such as a local tattoo artist’s online portfolio. “You won’t be disappointed by the photos.”

“Great.” Eric had gone back to work already, leaving Mina no chance to offer her blessing on the use of the images.

Not that she minded. She would have said yes to any artist asking the same favor, and Eric was certainly no exception. In fact, the thought of him admiring the photos of her tattoo lit a spark of satisfaction somewhere in her middle. She’d found herself looking forward to coming to the shop each day not just to watch her carefully-planned tattoo develop, but for the sheer pleasure of spending time with Eric. That was why she’d invited Karen to come along today. She’d run out of small talk to make with him and lying on the vinyl chair in silence made her nervous. She could count on her chatty best friend to keep conversation flowing.

An hour later, Mina climbed stiffly out of the chair. “Careful,” Eric said. “Get up too fast and you might pass out.”

Mina’s heart skipped a beat as he gently gripped her arm just above her elbow, steadying her. “Thanks.”

He began to clean her tattoo, sponging away the ink that was smeared from her ribs to the waist of her jeans. When it was finished, the design would span her entire left side, stretching from just below her shoulder to her hip in an intricate scroll of blossoming vines. “This is going to look great,” he said, thoughtfully surveying her side as he prepared a long length of bandage.

Mina wondered what it might be like to have him look at just
her
without studying his work, and her spine tingled. His blue eyes were intense and vivid, like a summer sky just before a storm rolls through. A heavy feeling settled into the pit of her stomach as he applied the bandage and she pulled down the hem of her shirt, ready but reluctant to leave.

“So, see you tomorrow?” he asked, finally meeting her gaze.

She stopped herself before she could frown, and when he leaned casually against the counter, she tried not to notice the way his biceps shifted beneath his sleeves. “Not tomorrow. Wednesday.”

“That’s right.” He nodded. “Sorry, I got used to you coming in every day and forgot.” His full lower lip jutted out just the tiniest bit, the motion so slight that she might have thought she’d imagined it if the corners of his mouth hadn’t turned down for half a moment before he plastered on a surprisingly charming smile. “See you Wednesday, Mina.”

“Looking forward to it,” she replied, unable to resist smiling back as she exited the booth, shooting one last glance at his biceps. He wore long sleeves to ward against the late September chill, but she’d bet anything that they were tattooed. And there was nothing quite like a set of muscular tattooed arms, as far as she was concerned.

“What was
that
all about?” Karen asked as soon as she and Mina stepped out of the shop, emerging into the brisk early fall air.

“What?” Mina asked, half-lost in a daydream about what kind of designs Eric might have inked across his biceps – or anywhere else, for that matter.

Karen shot her an incredulous glance. “Uh, the way he pouted when you said you weren’t coming back tomorrow?”

“He didn’t
pout
.” Even as she said it, she had to suppress a smile. If Karen had noticed it, it was true – Eric had been disappointed to know she wouldn’t return the next day. She bounced on the balls of her feet as she strode down the sidewalk. “You must have imagined it.”

“Oh no I didn’t.” She touched Mina playfully on the shoulder. “He’s got a crush on you.”

Karen shrugged. “OK, he’s got the hots for you and is probably thinking about how to get into your pants right now. That grown-up enough for you?”

Mina snorted, pretending indifference as Karen’s proclamation sparked a flood of very grown-up, very vivid thoughts. “Come on. I’m going to be late.” She quickened her pace as they rounded the corner and a parking garage came into view. “Jess will be waiting for me.”

“Mina, I finally found it!” Jess seized her backpack from where it hung on the back of her wheelchair and began to rummage through it enthusiastically as Mina closed the apartment door.