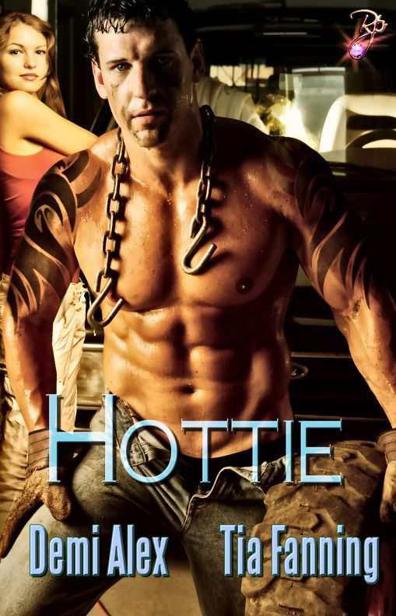 By Demi Alex and Tia Fanning

To the Hotties in our lives!
(You know who you are.)
xoxo
Tia & Demi

“I’ll take my chances,” Phoebe declared, strutting her ass through ninety-plus degree heat toward an old, not-so-trusty clunker of a car.

The pink metal glistened in the searing noon sun, taunting her with the false allure of a cool, reliable vehicle. But the stuff beneath the hood told a different tale. The stupid car royally sucked. It couldn’t go farther than ten miles without a pit stop for a drink of water.

She should have known better than to trust it. Hell, even the old man who sold it to her had warned her not to take Mary Lou too far or push her too fast. He’d said his late wife’s Caddy, which he claimed still smelled like her perfume, might be pretty to look at, but was more decrepit than he. And that was saying something. The old geezer had one foot in the grave.

“I think you should reconsider,” the hottie mechanic offered, trailing behind her. “It’s not safe. As I told you before—”

“Enough.” Phoebe stopped dead in her tracks and spun around. She stared him down—or up, if she wanted to get technical about it. “Look, I get it. But the truth is I don’t trust you. I think you’re trying to rip me off, and quite frankly, I’m sick of men trying to take advantage of little old me.”

Whistling to hide his laughter, the sex-on-legs mechanic clearly weighed her words, shaking his head and sucking in a loud breath. Strangely, he didn’t look offended; he just looked…disappointed, she guessed.

He wiped the back of his hand over his brow. “I like your bluntness, but I promise you, I’m being honest in my evaluation and fair in my pricing.”

With a roll of her eyes, she turned on her heels and continued toward the driver’s side.

“Dude, really. Even if I believed you, I couldn’t afford you.”

She opened the car door, squeaky hinges and all, and slid behind the steering wheel. She didn’t bother to put on the seat belt. It was broken. She turned the key in the ignition, and with some persistent pedal pumping, the noisy engine finally flipped over.

Hottie sauntered to the open door and squatted, resting his elbows on his gorgeously thick thighs, showcasing the talent of ink on his arm. At six-foot something, in a sullied uniform that fit snug around greased-up muscles, her mind drifted to something other than her car trouble. In Phoebe’s fantasy, Hottie was offering her another way to pay him for his services.

And then he spoke and ruined it all.

“This vehicle is nothing short of a deathtrap. I’d prefer you didn’t get behind the wheel. Let me fix it. I think we can work something out—”

“Geez.” She held up her hand. “You’re hot and all, but seriously, let it go. While I was just imagining sleeping with you as well, I don’t think you could live up to my fantasy. Lord knows I don’t want you to spoil it any more than you already have, so I’m going to pass on your offer and get the hell out of here.”

Cocky amusement flickered over his face. His blue, almost-gray, eyes sparked. “Wow. I love your candor.”

“Yeah, thanks,” she muttered, adjusting the mirrors. Now, if Hottie would just move out of her way so she could close the damn door.

“But,” he continued, “I was thinking more along the lines of a monthly payment plan on parts, and I would forgo the labor.”

Tapping her fingers on the steering wheel, she huffed out a frustrated breath. Hot and exhausted, Phoebe was in no mood to consider stacking more bills on her already considerable debt. No matter how good he looked, smelled and sounded, she had to move on.

She shook her head. “Look, I promise I’ll stop at the next town. The clunkette here will make it that far before she needs more water or something, right?”

“It’s not gonna happen, sweetheart. The next place worth stopping at is Sayville, sixty miles out.”

As if agreeing with his assessment, the car sputtered, coughed a few more times, and shuddered in the throes of a slow death.

Couldn’t anything go her way? Why wouldn’t the damn engine give her a tiny break?

Hottie cocked his head toward the shop. “Come inside and we’ll figure some numbers. I promise, no rip offs.”

“I appreciate the payment plan, but I’m not sure when I’d be able to pay you.” Scanning the desolate horizon, Phoebe swiped a drop of sweat trailing into her cleavage and fanned herself. “Hell, if I’m honest, I’ll probably never be able to pay you, and I don’t feel right about that. I think it’s best if I just leave, take my chances and pray that I make it to the next city where I can trade this beautiful POS for something uglier, but more reliable.”

Dane West wiped the back of his hand over his brow. The damn woman was going to be the death of his dick. If she didn’t stop being so fine, without even knowing it, his woody was sure to crack at the base and fall on his foot, breaking his toes from the fucking dead weight.

As she stared past the front windshield, he admired her pretty, yet pouty face crowned by red waves. He’d definitely enjoy twisting his fingers in the silky locks and pulling her head back, exposing the smooth moist skin on her neck. Like strawberry candy in a pretty wrapper, she was both hard and sweet, and he wanted her so bad he could taste it.

It would be his pleasure to learn how many licks, or sucks, it would take to reach her soft, creamy center. What a treat it would be to have her melting in his arms as she breathed “thank you, Master”.

With a sudden burst of renewed determination, Miss Phoebe Morris turned the key. After four attempts to get it restarted, and a string of muttered curses, the engine finally turned over.

Damn thing. No way was he letting her on the road in such a vehicle.

“Come on, Miss Morris. Let me help you. You know there is no way this baby is going to cross the state line—”

“Two state lines,” she corrected, reaching around him to close the car door. “I’m trying to get two states over.”

“This poor baby isn’t going to cross any state line, let alone two,” he amended, trying not to laugh at her stubborn persistence. “She needs a bit of loving. Let me patch her up and pump her full of fluids, so you both can make it without a meltdown. I bet a working air conditioner would be something nice to have in this heat.”

The car wasn’t the only one in need of loving. The weariness in Phoebe’s gaze rimmed her brown eyes with bright pink that stood out against her skin like a flare on the side of a country road. Despite the woman’s defiant bravado, he could tell she was tired, vulnerable, and, if he was reading her “sleeve” right, brokenhearted. Even if her car was perfect, he wouldn’t want her to leave—or better put, he wouldn’t let her leave. Something about her hit him straight in the gut.

“I’m good,” she insisted, even as the car died yet once again.

She turned the key in the ignition. The damn engine sputtered to life
again
, but this time with a great deal of steam and smoke. Puffs of gray poured from beneath the hood and the front end shook like it was spiking a hundred and three fever.

“See? We’ll be just fine,” she announced as she waved off the fumes. Despite the forced optimism in her voice, the apprehension in her gaze was undeniable. She was worried about driving the battered pink tank; she was just too proud and stubborn to say so.

Mulish. He shook his head. Too stubborn for her own good.

Miss Morris had no idea how incredibly enticing she was, which made his erection that much stiffer. But no matter how hard and heavy he might be, and regardless of the way she made him feel, his arousal was second to her safety. It was too dangerous, and he would never forgive himself if something bad happened to her because he failed to convince her to let him fix things.

“I’m still concerned,” he replied. “Mind if I make sure the oil cap is screwed on tight?”

“Go ahead. Whatever floats your boat.” She shrugged her nonchalant consent, her chest swelling between her crossed arms. “Just make it quick.”

Concealing a grin, he took his time popping the hood and propping the heavy cover to stand open. The more time he wasted, the greater chance he had the engine would stall again while still in his drive. He’d rather she be stuck in his care than stuck on the side of a deserted two-lane highway.

Assuming she’d be able to handle the malfunctioning vehicle and pull off the road safely, there was no way of knowing how long she’d be stranded before a Good Samaritan stopped to help her. Good being the key word. A pretty woman alone, miles from civilization, was no match for some asshole with ulterior motives.

“Miss Morris,” he called, pretending to search the tattered machinery and giving her a chance to make a logical decision. “Are you absolutely sure about this?”

“Positive. I’ll be fine.” She paused, rubbed her palm over the steering wheel, and smiled. “We’ll be fine.”

The woman was definitely too proud for her own good. He’d have to do something about her self-destructive doggedness. A few instructive stings on her shapely ass would do her wonders.

Glancing above the open hood, he grinned. Impatiently playing her dainty fingers over the steering wheel, she chewed on her lower lip and met his gaze. He’d bet she was holding her breath, praying the car wouldn’t disappoint her in his presence again, all the while knowing she was setting out in a fucking deathtrap.

Dane ducked his head, fiddled with the oil cap, and reached behind the carburetor and disconnected the coil wire. The engine stalled.

A muffled “mother fucker” assaulted his ears, followed by a slam that was loud enough to vibrate the air around the now peaceful car.

“What did you do?” Phoebe demanded, marching up to him with fury blazing in her eyes.

“Don’t give me some bullshit story.” She stuck a stiff finger against his chest. “Matter of fact, don’t say a fucking word. Just fix whatever you just broke.”

Dane suppressed the urge to flip the spitfire over his knee and spank the wasp right off her tongue. While vulnerable, Phoebe was by no means weak or stupid. Of course she realized he’d sabotaged her car, and damn right she was going to call him out on it. But call as she might, he wasn’t giving in to her temper tantrum.

Smart, brave, beautiful…and stubborn. Man, she was stubborn. Perhaps too stubborn for her own good. She was in dire need of a good lesson or two. And, if she didn’t remove that finger—