Read How To Avoid Death On A Daily Basis: Book One Online

How To Avoid Death On A Daily Basis: Book One 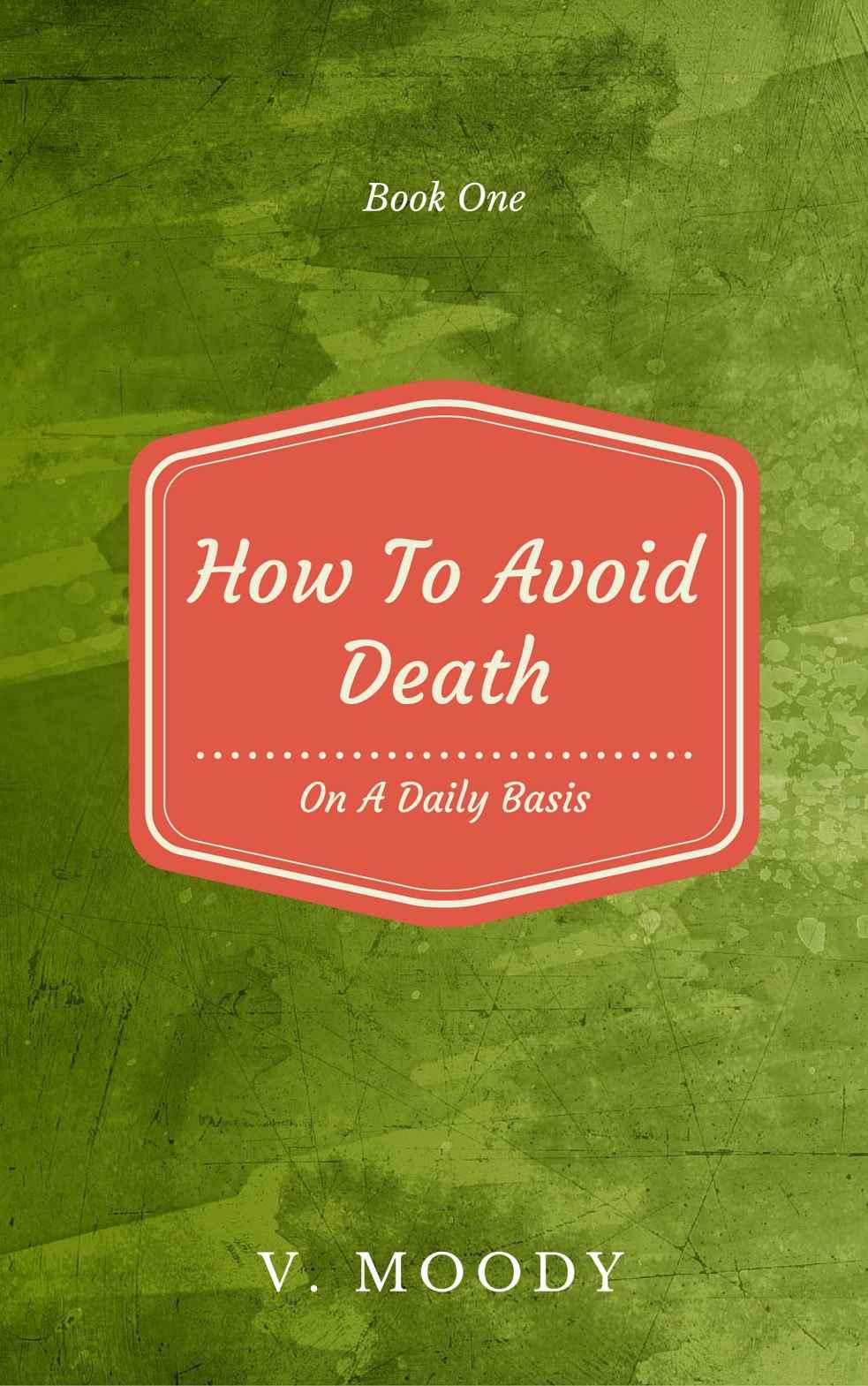 HOW TO AVOID DEATH ON A DAILY BASIS

All rights reserved. No part of this publication may be reproduced, copied in any form or by any means, electronic, mechanical, photocopying, recording or otherwise transmitted without written permission from the author.

22. A Gift From Prometheus

23. Then There Were Three

28. Choose Your Own Adventure

31. A New Challenger Has Appeared

The first thing I saw was the sky. I closed my eyes again. l remembered coming home after another crappy day at work, heating a frozen lasagne in the microwave—it tasted like cardboard—and falling into bed. I should have been looking at the ceiling of my bedroom, not a clear blue sky. Not unless a storm had ripped the roof off my building.

My fingers dug into earth and grass scratched at my neck and bare legs. The drone of an insect buzzed past, followed by a distant roar that King Kong would have been proud of.

I sat bolt upright and looked around. Trees surrounded a grassy clearing full of wildflowers. I was in the tee shirt and boxers I had gone to bed in, but there was no bed and my bedroom had a totally different decor.

Something howled from the opposite direction to the roar. The thing that howled sounded closer than the thing that roared. I didn’t fancy meeting either.

As I looked around I noticed other heads popping up in the long grass. I got to my feet and saw about a dozen or so other people sitting up and looking confused. They all appeared to be about my age and, like me, dressed for bed. About half were girls.

As people started to get to their feet I realised there were even more than my original estimation. Maybe twenty. They started asking each other questions.

“Did anyone else hear that?”

“Does anybody know what happened?”

Lots of questions. No answers.

Something buzzed at my ear and I turned sharply to avoid being stung. The thing I reacted to hovered level with my face. It resembled a dragonfly in size, and in every other respect a tiny person with wings. It hissed and bared its fangs at me, before zipping off at speed.

My legs folded under me and I fell on all fours. My breathing turned to high pitched wheezing until it ceased altogether. I rolled onto my back and opened and closed my mouth but air refused to enter.

A face appeared above me. My eyes had watered up, blurring everything. The face belonged to a girl with long, dark hair but the only other feature I could make out was her freckled nose.

If I could take a breath I would, I wanted to say. But you need air to make words, and I didn’t have any.

Just when I thought my lungs were about to explode, my chest relaxed and air rushed in. My gasps sounded like a baby seal calling for its mother.

The girl stood up and backed away, obviously freaked out by me.

I raised a hand, trying to say I was okay. She seemed to understand and looked over to where the others were gathering and started edging towards them. I didn’t blame her for not wanting to be left looking after the retarded kid.

Still shaken and breathing hard I got to my feet. I hadn’t had a panic attack since I was twelve. For most people, you feel scared, nervous, shy, you eventually get over it. You tell yourself to stop being silly, and you take the plunge. Learning to swim, asking a girl out, killing a spider—whatever it is, if you can overcome the fear in your mind, you can do it.

That doesn’t work if no matter how much you convince your brain to play ball, your body says, “Fuck you,” and shuts itself down, leaving you flopping around like a spaz.

It’s the reason my life turned out the way it did. The best way to avoid embarrassing myself was to avoid situations that might trigger me. Which meant avoiding people in general. Not great, but manageable. And suddenly I’m stuck with a bunch of strangers in a place, judging by that thing I saw, that isn’t even—

The speaker was a tall, blond guy. Ripped, good-looking, your basic alpha male. He was wearing a tee shirt for a band so cool I’d never heard of them, and knee-length shorts. He looked ready for a trip to the beach and maybe a little surfing. Girls and guys alike huddled around him.

“Obviously we aren’t in Kansas any more.”

I wouldn’t have put it in quite such a cliched way, but he wasn’t wrong. Judging by the weird creature I saw earlier, we weren’t even on Planet Earth anymore.

“It’s pretty clear none of us knows what’s going on, but the important thing is to stay calm. There doesn’t appear to be any immediate danger so sit tight and a few of us will scope out the surroundings, see if we can get our bearings. That cool with everyone?”

A general murmur of assent spread through the crowd, but I expect they would have agreed to form a circle and do the hokey-pokey if Golden Boy had asked them to. By the way, I wasn’t jealous or resentful of his ability to wow with a smile and wink. Good for him. I’d long ago given up on any hope of that kind of popularity, and if he could get us out of this place, go, go, Team Golden Boy.

“And, girls,” said a guy who had taken up position on Golden Boy’s shoulder, “any of you feeling scared, come see me. I’ll make you feel safe.” He was a black guy with a shaved head and a dazzling smile, wearing a tight vest that showed off his incredibly muscular arms.

“Me first,” said a female voice in the crowd, to much tittering.

“Hey, shouldn’t we start a fire or something? In case they send out search parties. The smoke will be seen from the air.”

Rather than getting on with Golden Boy’s plan, suddenly everyone wanted to make a suggestion based on an episode of Bear Grylls they half remembered watching or something equally inane. They seemed to have totally forgotten about the strange noises we’d heard. Having seen the weird fairy creature, I suspected it wasn’t just a couple of stray dogs out there. The quicker we found a path or track leading somewhere safe, the better.

Once I got my breath back, I moved closer to the trees, trying to see through the gloomy gaps between gnarly tree trunks. Which was when I saw the group of men headed in our direction, dressed in armour and carrying swords.

The armour worn by the approaching men wasn’t exactly Roman legionary level, but not far off.

“I think someone’s coming.” No one heard me, even though I said it quite loud. No surprise. I turned around and cupped my hands around my mouth. “Oi! Company.” I jerked a thumb towards the trees behind me.

Having got their attention, the others all swarmed towards me. And then past me.

As they all rushed to see who was coming, I noticed how many of the girls were dressed in skimpy outfits. Possibly a strange time to be checking out the ladies, what with potential murderers about to hack us all to death, but everyone deserves a last meal. The pretty, dark-haired girl who helped me earlier wore a particularly cute silky number. She hurried past taking great care not to look in my direction.

The last of the stragglers was a black guy who really stood out from the crowd. He had an untidy afro, teeth that didn’t seem to fit in his mouth and he was wearing a onesie decorated with characters from the movie
Batman
, the Tim Burton one. Fair play to him, he was dressed for both comfort and warmth. He even had his feet covered, which would help if we had to make a run for it.

I only took a few steps before the crowd started backing into me. The men in the trees had emerged. There was one leader, identifiable by his superior armour and flashier sword, followed by six men carrying swords without fancy engravings on their blades, which looked very sharp nonetheless.

I could understand what he was saying, but for some reason it didn’t feel like English. If I stared at his lips as he spoke, the words didn’t quite fit. But this made it harder to listen to what he was saying, so I decided to concentrate on that instead.

“The first thing we need to do is get moving. It’s about an hour’s walk to town, and then we’ll get you some clothes and food.” And there was no accent, just a neutral tone.

From their voices all of the other people seemed to be British, with accents ranging from north to south.

“I know you all have questions, and I’ll be happy to answer them once we get back, but it isn’t safe to stay here. Nothing my men can’t handle, but it would be better to avoid trouble. There’s more of you then we were expecting, so it’s important we stick together. If we are attacked, don’t panic and run off. And don’t try to help. Just stay behind us, we’ll take care of it.”

“Attacked? What does that mean?”

“What the hell are you talking about?”

All excellent questions, and more than adequately answered by the huge monster that burst into the clearing, smashing through the trees with a deafening roar.

Wolfbreed by S. A. Swann
Du Maurier, Daphne by Jamaica Inn
Folktales from Bengal by Soham Saha
This Cowboy's Heart by Cia Leah
Fiercombe Manor by Kate Riordan
Unplugged: A Bad Boy Rockstar Romance by Valentine, Sienna
KILLING PLATO (A Jack Shepherd crime thriller) by Needham, Jake
Black and Blue by Notaro, Paige
Dear Miffy by John Marsden
The Cat Who Turned on and Off by Lilian Jackson Braun