Read How to Bake a Perfect Life Online

How to Bake a Perfect Life 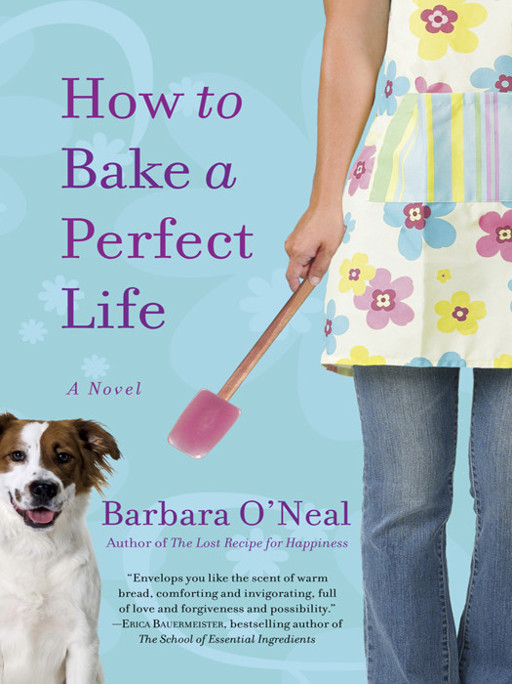 Praise of the Novels of Barbara O’Neal

“The Lost Recipe for Happiness
is a delectable banquet for the reader.… This book is as delicious as the recipes interspersed throughout an unforgettable story.”

“The
Lost Recipe for Happiness
is utterly magical and fantastically sensual. It’s as dark and deep and sweet as chocolate. I want to live in this book.… A total triumph.”

“Beautiful writing, good storytelling and an endearing heroine set against the backdrop of Aspen, Colorado, are highlights of O’Neal’s novel. A tale that intertwines food, friendship, passion and love in such a delectable mix is one to truly savor until the very last page.”

“Will appeal to women’s fiction fans and foodies, who will enjoy the intriguing recipes … laced through the book.”

“O’Neal has created a powerful and intriguing story rich in detailed and vivid descriptions of the Southwest.”

“Readers will identify with this story and the multilayered characters.… And with some of the tantalizing recipes for dishes served at the 100 Breakfasts Café included, O’Neal provides a feast not only for the imagination but the taste buds as well.”

“Barbara O’Neal has masterfully woven local culture, the beauty of nature, her love of food and restaurants, and a little romance into this magnificent novel.”

How to Bake a Perfect Life

How to Bake a Perfect Life
is a work of fiction. Names, characters, places, and incidents are the products of the author’s imagination or are used fictitiously. Any resemblance to actual events, locales, or persons, living or dead, is entirely coincidental.

For my mother, Rosalie Hair
,
who is
nothing
like
any
of the mothers in this book
.
Well, except for maybe that earring thing
.

As always, a zillion people helped with this book. Many, many thanks to my sister Cathy Stroo, who helps me with medical knowledge on nearly every book, and this time helped me understand the struggles of burn patients. For help with the process of how wounded soldiers are moved through the hospital system, I’m extremely grateful to MaryAnn Phillips, who heads up the volunteer organization Soldiers’ Angels (
www.soldiersangels.org
), a valuable and devoted group who serve soldiers and their families at one of the worst times in a soldier’s life. All mistakes or missteps are entirely my own. Thanks also to Terence.
Muchas gracias
, my friend.

My grandmother Madoline O’Neal Putman, and the late great Merlin Murphy O’Hare kept me company all through the writing of this book. Miss you both lots and lots.

And, as ever, thanks to Christopher Robin, who tastes everything even if he is sure he won’t like it.

Praise of the Novels of Barbara O’Neal

Step Three - Knead and Set in a Warm Place to Rise

Step Four - Punch It Down

Sourdough starter—or mother dough, as it is known—is made from wild yeast that lives invisibly in the air. Each sponge is different, according to the location where it is born, the weather, the time of its inception, and the ingredients used to create it. A mother dough can live for generations if properly tended and will shift and grow and transform with time, ingredients, and the habits of the tender
.

The Boudin mother dough used to create the famously sour San Francisco bread was already fifty years old when it was saved from the great San Francisco earthquake of 1906 by Louise Boudin, who carried the mother dough to Golden Gate Park in a wooden bucket. There it was packed in ice and used to make bread daily until a new bakery could be built at its current location. The mother dough, now more than 150 years old, is stored in a vault, “like a wild beast,” and bread is made from it every day
.

W
hen the phone call that we have been dreading comes, my daughter and I are gathered around the center island of my bakery kitchen. Sofia is leafing through a magazine, the slippery pages floating down languidly, one after the next.

I am experimenting with a new sourdough starter in an attempt to reproduce a black bread I tasted at a bakery in Denver a couple of weeks ago. This is not my own, treasured starter, handed down from my grandmother Adelaide’s line and known to be more than a hundred years old. That “mother dough,” as it is called, has won my breads some fame, and I guard it jealously.

This new starter has been brewing for nearly ten days. I began with boiled potatoes mashed in their water then set aside in a warm spot. Once the starter began to brew and grow, I fed it daily with rye flour, a little whole wheat and malt sugar, and let it ferment.

On this languid May afternoon, I hold the jar up to examine it. The sponge is alive and sturdy, bubbling with cultures. A thick layer of dark brown hooch, the liquid alcohol generated by the dough, stands on top. When I pull loose wrap off the top of the bottle and stick my nose in, it is agreeably, deeply sour.
I shake the starter, stick my pinkie finger in, taste it. “Mmm. Perfect.”

A Valentine Surprise by Page, Lisa
Mitch and Amy by Beverly Cleary
The Night I Got Lucky by Laura Caldwell
lost boy lost girl by Peter Straub
New Title 1 by Wilson, F. Paul
The Narrow Road to the Deep North by Flanagan, Richard
For The Least Of These by Davis, Jennifer
Entwine (Billionaire Series) by Harper, Evelyn
Rust by Julie Mars
We Shall Not Sleep by Anne Perry