Read How You Remind Me Online

How You Remind Me 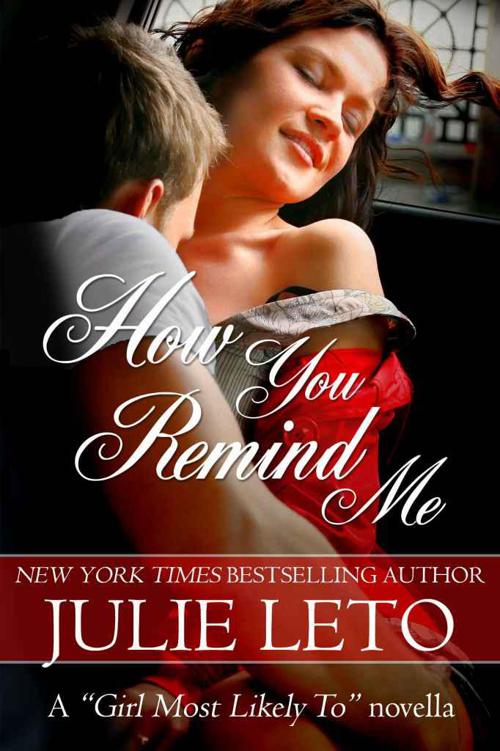 “Blazing
hot! A story so seductive you can’t stop reading!”

Another “Girl
Most Likely to” Story

“I don’t remember him being this hot in high school.”

Kate Schaffer curled her hair over her ear, despite the fact
that she was trying to tune out to listen to the women standing a foot away
from her with drool practically dripping down their chins. Ever since Shaw
Tyler and his band, Cell Block Tango, had taken the stage, every comment she’d
overheard had run along the same lines.

“I should have left my husband home with the kids.”

“Shaw Tyler sure has aged well in all the right places,
hasn’t he?”

“I always wanted to be a groupie, but I never had the nerve.
God, what have I been missing?”

Kate pressed her lips tightly together. She knew the answer,
but she wasn’t going to share. She was not a member of the St. Aloysius Class
of 2002 currently attending their tenth high school reunion at the Celebrations
resort outside Chicago. She was assistant to party-planner Erica Holt and the
woman who had arranged for Cell Block Tango and their hot lead singer to play
the reunion, as she had for dozens of events since she’d taken over
entertainment bookings for Events by Erica. She had no business taking too much
interest in Shaw Tyler’s smooth gyrations and sinfully sexy vocal stylings.

That road led to ruin.

Unlike these twenty-somethings creaming their panties for a
man they’d never have—at least not for more than a couple of hours—Kate knew
precisely what it felt like to be a groupie. And while hooking up with hot
musicians had definitely had its perks in her youth, she didn’t have time for
such nonsense anymore.

Which, she admitted to herself as Shaw ground out a gravelly
phrase about making love in the moonlight, was a damned crying shame. Unlike
the salivating women gravitating closer and closer to the stage, Kate had been
with guys like Shaw. Sexual. Raw. Fearless.

“I don’t know how you resist him.”

Kate jumped, as startled by her boss’s unexpected appearance
as she was by the tweak of pressure between her thighs at the momentary thought
of not resisting him at all.

“It’s not hard,” Kate lied, returning to her task of fanning
reunion schedules on a table near the exit. She should be working, not watching
Shaw Tyler swivel his hips so subtly and yet, so artfully, a twinge settled in
an area of her body that had no business asking for attention this weekend. “Guys
like him are a dime a dozen.”

“Really? When’s the last time you hooked up with a guy like
him?” Erica challenged.

Kate pushed her glasses further up her nose. She wore the
red-framed, cat-eyed spectacles because she thought they were funky, fun and
amusing. They also gave her something to do with her hands when strangling
someone was out of the question.

“Do you mean a guy most likely to forget my name by morning?”

Erica arched a brow. “Since you’re the girl most likely to
want him to forget your name, how can that be a bad thing?”

“I’m not that girl anymore.”

“Maybe you should be,” Erica mused. “From what little you’ve
told me, that girl had a lot of fun.”

Kate shoved her hands onto her hips. Maybe Margarita Mondays
at the offices of Events by Erica weren’t such a brilliant idea. She invariably
spilled more about her private life than was wise, especially to her boss.

Ordinarily, Erica was in full support of Kate’s decision over
a year ago to clean up her act. After a scary blackout incident had changed her
corporate-lawyer-during-the-day, wild-party-girl-at-night routine, Kate had quit
her job at a law firm and joined Erica in organizing Chicago’s social life. Willfully
and willingly, she’d exchanged legal briefs and depositions for engraved invitations
and wedding receptions. And since she now partied for a living, she no longer
needed to sow her wild oats in the dark of the night with guys who’d she never
acknowledge in the light of day.

“I thought you wanted me on call this entire weekend,” Kate
argued, “taking care of every detail of the reunion so you could adequately reunite
with your guy most likely to ride out of town on a Harley. Where is Mr. Motorcycle-Man,
anyway?”

“He’s grabbing some drinks. And his name is Scott. Though he
did look hot on the back of that hog. All that leather.”

Erica practically purred. Kate flashed a glance at Shaw. The
only leather he had on tonight was the strap holding his guitar across his
chest, but his well-worn jeans and half-unbuttoned cotton shirt was just as
bone-melting.

Kate scrunched her nose and tore her gaze away.

“I thought you called him Rip.”

Erica’s frown told Kate everything she needed to know about
her boss’s attitude toward her reputation in high school. She’d also been
tipped off earlier when Erica had arrived at the hotel on the back of a Harley,
decked out like a biker chick, defying every preconceived notion her classmates
might have had about how her life had progressed since graduation. Kate knew
the transformation was new and entirely out of character, but Erica seemed to
be enjoying the hell out of it. Even tonight, her sundress was a little more
flowing and a lot more low-cut than Erica normally wore. And without a doubt,
her smile was bigger, brighter and nearly infectious.

“You wouldn’t think that if you’d been through what I have.”

“Maybe,” Erica conceded. “Maybe not. But if there’s one
thing I learned this afternoon, Kate, it’s that the pain from the past doesn’t
matter nearly as much as living the here and now.” Erica tossed a purposeful
glance in Shaw’s direction. “You might want to reconsider your hands-off
approach to sexy Mr. Tyler. There are fifty women, single and married, who are
using all their self-control to keep from tossing their panties at him right
now, but by the way he’s looking over here, the only woman’s underwear he wants
is yours.”

Erica flitted away before Kate responded, which was just as
well since Kate had nothing to say.

She was watching him. Shaw was glad he’d played this song a hundred
times because the minute he became aware that Kate Schaffer’s intense emerald
stare was centered on him, his brain disengaged from the music. Uptight,
perennially professional, sinfully sensual Kate, who normally only spared him a
grudging glance when absolutely necessary, couldn’t look away.

Kate had seen him play before, dozens of times. Since Erica opened
her event-planning business after college, he and his band had provided the
music for countless parties, bar mitzvahs and weddings. The gigs weren’t always
glamorous, but they paid the bills and gave him a chance to try out new songs
between the covers.

Kate, however, had never been impressed. When she spared him
more than a few seconds of her attention, he caught glimpses of distrust in her
expression, as if she wasn’t comfortable with the fact that she couldn’t ignore
him.

As if some part of her wanted to remember the night they’d
spent together.

A strident strum blared through his earpiece. Someone in the
band was playing off-key…no, not someone. Him. He tore his eyes away from Kate and
tried to focus on the chords. Once he had the rhythm again, he looked out into
the audience, sang a few more bars of the chorus and tried to focus on someone
else.

As usual, she looked gorgeous. Unfortunately, she was dancing
with a guy who didn’t deserve the privilege of having his hands on her.

Rip wasn’t a bad guy, exactly, but he wasn’t up to Erica’s
usual standard. Which could be exactly what she needed.

Just like he could be for Kate, if she’d just give him another
chance—which she seemed to be doing, judging by the continued eye contact.

Thankfully, the song ended. He pulled at the collar of shirt,
afraid he was soaked to the skin. The sultry summer heat, cooled only by fans
placed strategically around the rooftop club, was starting to get to him. Or
maybe it was just Kate.

Of course it was just Kate. The woman had gotten under his
skin as deeply and permanently as the ink tattooed across his upper arm. Unfortunately,
she had no idea of the power she wielded over him. They’d “met” over a year ago
when, from the stage, he’d witnessed some creep drop something into her drink
while she was out partying after work. As the minutes passed, her inhibitions
dropped. She let down her hair, unbuttoned her blouse and started draping
herself over the prick who’d been so desperate for a date he’d opted to get one
through pharmaceutical means.

Shaw had never met Kate before that night—he’d never even
seen her before. But the minute the bastard had started to lead her out of the
club, he’d cut the band’s set short and chased them down. Two left hooks and an
upper cut later, she’d melted into his arms.

As far as he could tell, she didn’t remember anything about that
night. But no matter what he did, he couldn’t forget a single minute.

He turned to his drummer and signaled a change-up in the set,
pulling himself out of the lead singer spot. His bassist threw him a confused
look, but after the opening riff, he moved to the mike and started singing. Cell
Block Tango might not be the big time, but they were a well-oiled musical
machine.

Once Shaw got past the first couple of bars without flubbing
the beat, he faded into the background, taking up a position beside his
keyboard player. His fingers picked over the strings of his guitar, but without
having to contribute more than a couple of background “oohs” and “ahhs” during
the refrain, he concentrated entirely on Kate.

Kate. Katie-gate. His scandal in the making.

She wasn’t watching him anymore. This was what he was used
to, watching her from the stage, wondering when or if she’d ever remember the
night they spent together…contemplating the circumstances under which he would
tell her about what happened—and what didn’t.