Hunter Legacy 9: Hero at the Gates 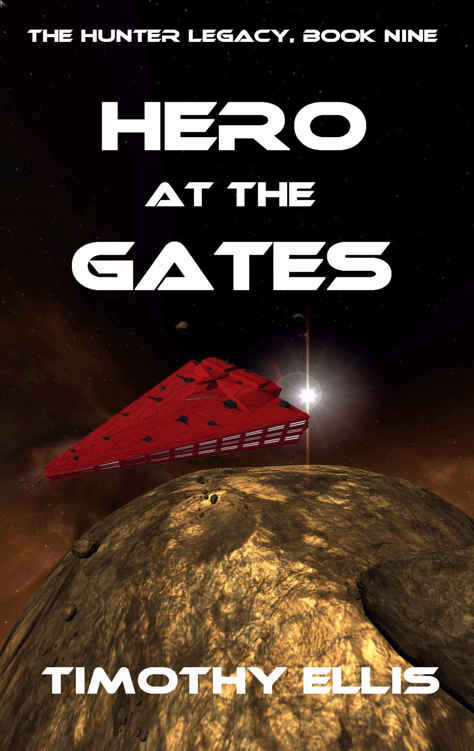 Hero at the Gates

This book is a work of fiction. The names,
characters, places and events are fictional and have no relationship to any
real person, place or event. Any resemblance to persons, living or dead, is
purely co-incidental.

The author has taken the liberty of using
some recognizable names in a historical context or projected into the future as
if such entities survive into the timeframe of this work of fiction. Such
references are intended solely as a tribute to the entity so used and all such
usage has an intended deep respect. The author has also deliberately chosen
names for characters in tribute to the science fiction genre in all forms of
media. Some may be obvious, others won't be. There is no implied connection,
other than what the reader may make for themselves.

The author is Australian and the main
characters in this book are of Australian origin. In Australia, we colour
things slightly differently, so you may notice some of the spelling is
different. Please don't be alarmed. If you do suffer any discomfort, please
take it out on the nearest pirate.

All Rights Reserved. No part of this book
may be reproduced, scanned, or distributed in any manner whatsoever without the
written permission from the author except in the case of brief quotation
embodied in critical articles or reviews.

A Message to my
Readers

"Definitely pirates," announced
Jane. "Melissa just confirmed it. They're heading towards, and the
Lightnings blew past them without any reaction."

"At this speed, twenty minutes."

Jane had three ships highlighted on the
HUD. They were strung out in a line, about fifteen minutes apart. The first was
a very modern Corvette, in the same class as Unthinkable, before I'd had her
upgraded.

Ten minutes later, I gave Jane the nod, and
she pulled us back to a much slower speed.

Camel launched from her side docking bay,
with 266's Privateers launching a few seconds later. They formed up ahead of
BigMother in an arrowhead formation.

General Custer also launched, from her dock
on top of BigMother, and formed up above us.

Jane slowed us some more, and the smaller
ships pulled ahead of us.

We'd done this a number of times before,
and there appeared to be no complications this time, so I expected this to be a
slam dunk. So did everyone else.

The Corvette seemed to have better shields
than the class usually had, no doubt due to my design influence being copied by
the pirates. All the same, it had a lot less than Gunbus did.

Lacey fired Camel's front guns from long
range with two torpedoes, looking to knock down shields without doing any damage.
Behind him, the 266 pilots fired their front guns. The Corvette changed course
quickly, also showing the influence of my design innovations, but more than
half the pulses and both torpedoes hit.

"Sorry boss," said Lacey. "I
don’t understand what happened. We didn’t hit it hard enough to more than
damage it slightly."

"Something suss with it for
sure," said George, in the captain's chair on Custer. "Maybe they
were carrying ordinance for a bigger ship, and a torpedo just hit the
spot?"

"Let's tone it down for the next
one," I said. "It's also a modern looking Corvette. If you need to
take a few passes, its fine with me."

Lacey started giving orders to his pilots,
and they reformed into an arrow formation, matching my speed.

Camel continued straight ahead, firing full
front guns, but no torpedoes this time. The Excalibur's went left, and used
their Point Defense turrets to flail at the Corvette's shields. The Centurions
went right, and did the same, although with less turrets. The Corvettes shields
failed, and Lacey gave it a single torpedo aimed half way down its back.

I sighed, and face-palmed.

Swearing came from some of the Centurions.

"That made no sense at all boss,"
said Lacey.

"I agree," added George.
"That torpedo should have opened the ship to space, but no way should it
have destroyed the ship completely."

"Third times the charm then," I
said.

Rinse and repeat, as they say, although for
the moment, I couldn’t quite remember who 'they' were.

The third ship was an old Frigate. While
being bigger, it should be less than the modern Corvettes in terms of firepower
and shielding. I passed that on to Lacey, and he gave his pilots new orders.

Camel and 266 pulled away, leaving the
Frigate with hull damage in several places, but no actual breaches.

Custer pulled alongside, as the Frigates
shields began to regenerate. The nearest Point Defense turrets fired into the
Frigate.

Custer's shields had been reduced by half,
and a roiling cloud of debris washed across her, until George was able to get
her clear.

There are some days when you just shouldn’t
get out of bed. They follow decisions you shouldn’t have made. Well, maybe.

I made an effort.

"We don’t have time for this
shit!"

I shot her a dirty look. I'd been hearing
that same line trotted out over and over for three days now.

The few others on the Bridge with me
remained silent. They were seeing a new side of me, and I guess no-one quite
knew what to do with it. I had to admit, I had been a grump. But I had good
reason.

We needed to capture a pirate ship, and we
needed it now. So far we'd destroyed every pirate we'd come across, even though
we were making every effort not to.

"Get everyone docked, and let's get
moving again."

Camel and 266 had been supposed to soften
up shields so Custer could dock and capture. They'd done it before. But it seemed
pirate shields weren’t what they used to be. I had a thought.

"Can they be self-destructing on
us?"

"Why would they?" asked Dick.
"I agree it looks like that's what's happening, but there's no reason for
it."

"They never have before," added Amy.

Okay, fine. When you want something done
right, do it yourself. I sat there fuming.

"All docked," said Jane.
"Resuming course. Lightning's are waiting for us at the next jump."

"Tell them to get going."

Melissa and Grace in the Lightening's were
doing two jobs. Clear the way in front of BigMother as we headed down the spine
close to top speed, and destroy the Comsats on the other side of any pirate
force they passed. So far, they were the only part of this hair-brained scheme
to be going right.

We'd come through Wolf 359, Paris,
Switzerland, Gibraltar, Portugal, Denmark, Norway, Sweden, Finland, and Moscow;
like a bat out of hell.

Part of my bad mood was we were going the
wrong way. The Door to home was opening soon, and I was getting further away
instead of closer.

In Nippon, the Lightning's had zoomed past
the three pirates they'd found there, pretending to have no interest in them,
and destroyed the Comsat at the Beijing jump point, so they couldn’t get a
message out. That was the only thing which had gone right. The pirates had been
using ID overlays, so until the Lightnings came into short range and scanned
them, we hadn't known for sure they were pirates. There were a few more
suspects ahead of us, but we wouldn’t know until someone came in range. Until
then, they could be legitimate sector forces on patrol. It would be nice if
sectors let us know, but. The but hung there. There really wasn’t an end to the
sentence.

At the jump point ahead, we would need to
tweak the programming of the comnavsat there to do the work of the normal comsat
it now had to replace. By default, the comnavsats only allowed Hunter traffic
through, unless told otherwise. Jane would do the change on the fly, because we
were not stopping for anything short of another pirate.

"Tell everyone to go to bed," I
said to Jane. "That’s where I'll be, and don’t bother me for anything
short of another pirate."

Short another pirate. That we were. It was
the lynch pin on this plan. No pirate, no plan.

I stomped out past Magnus, who wasn’t game
to meet my eye, the white streak of Angel passing me before I reached the door.

Travelling this fast was stressful. We'd
already had minor collisions with several ships at jump points, leaving chaos
behind us. Fortunately no fatalities, but I wasn’t picking up the pieces of
people too stupid to get out of the way of a Carrier going hell for leather. We
simply didn’t have the time for normal speed travel, and taking it carefully.
Normal for me of course, which was much faster than everyone else's normal.

'And we will be returning to normality, as
soon as we can figure out what is normal anyway.' One of my favourite Hitch
Hikers comments. Normal and I had this understanding. It didn't bother me, and
I wouldn’t bother it. Occasionally though, we had an altercation.

In my bedroom, I stripped off, changed into
boxers and t-shirt, and threw myself on the bed.

"What the hell was I thinking of?"
I asked myself.

"What use are you then?" I
demanded.

"More than you at the moment," I
responded.

I buried my head in my pillow for a while.
Sleep didn’t come. My mood didn’t improve. I turned over onto my back.

"Remind me why we're doing this?"
I asked the air above me.

"Perhaps I better show you," said
Jane, and popped up a hollo of my Ready Room.

The time stamp showed it to be just after
breakfast time, three days earlier.