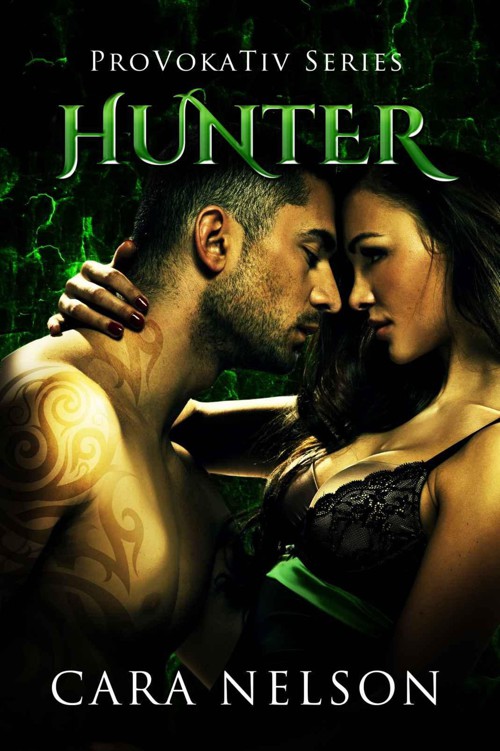 Thank you for downloading ‘Hunter’!

The catch? They’re only available for 24 hours.

I dedicate this book to you, my loyal readers. Wherever you are in this world. Thank you for all the lovely e-mails, reviews, and support. Without you, this wouldn't be possible.

Chapter Two:  She’s the One

Chapter Three:  The Art of Aggression

Chapter Twelve:  One Way or Another

Chapter Thirteen:  Out with My Besties

Chapter Sixteen:  The Vixen of the West

Chapter Seventeen: The Meaning of the Words

Out of all the things I’ve done in my life and all the things that I’d probably be willing to do, being accused of sleeping with my fat, jerk-off director is not on that list. Now, I’m screwed and out of a good job because he an insecure wife, who is unfortunately the creative director, and also thinks that it is my fault her husband was overly flirtatious to me. I sure as hell didn’t invite his slimy fingers always finding a way to touch me, or encourage him to pull me aside to talk about nothing.

I was so annoyed as I paced around my apartment, replaying the words that the casting director said, “I’m sorry, Trinity. This just isn’t working out. You’ll be paid for your work up through yesterday. Your check will be mailed on Friday.”

Remembering the words came with remembering how angry they had made me. It was not fair. It was not fucking fair! My entire body was shaking as a stormed around my small, studio apartment, trying to find something that I could throw. Anything! I wasn’t pissed off enough to throw my small Chihuly sculpture—my most expensive asset that I owned and had cost just as much as I had saved. I looked over to my couch and saw the bolster pillows that were originally placed there for decoration. Yes, they were about to become a frustration relief object. I picked up that square pillow, stared it in the face and pictured that fat pig of a director, and smashed it over and over until the fabric made my knuckles tender and my arm got a cramp in it. I wondered if this happened anywhere else aside from the Twin Cities.

“Ugh!” I screamed, finally collapsing onto my couch. I wished it wasn’t so contemporary because I would have preferred it to just swallow me whole and take me away from this god forsaken world.

Then it started—something I have always avoided at all costs. I started to cry. Things could not get any worse. I charged over to my bathroom mirror, ready to scold myself and snap out of it. “Get a grip, Trin. This is ridiculous, you’ll figure it out, and you will be fine.”

Of course, that nasty little voice of reality in the back of my mind had to get in on the argument. “So what if you only have $200 in your checking account and no other job lined up right now. You’ll be fine. Welcome back to the world of ramen noodles and mac and cheese.”

Finally, I felt a flicker of common sense surge through me and win out. I needed to call Jessie and hope she could be a part of an emergency intervention to calm me down before I went on a complete rant, making me look like a crazy lunatic. Yeah, it was possible. Not too much middle ground with me. Jessie always found a way to convince me that the middle ground wasn’t so, well, sucky.

“Jessie, hey. Glad I caught you live. How about a work-out and some Gohrka Palace, my treat?” I asked, not bothering with a text message.

“Oh no, what’s wrong?” Jessie asked. Her concern immediately shone through and I

“If you give me an hour to finish up my paper, it’s a deal.”

“K.” I hung up and started to pack my gym bag, realizing that my favorite Indian food, Gohrka Palace, would be the last indulgence I had for a long time. It would be worth it—food therapy was preferable to seeing a therapist. They never got me, anyway. Yep, I was unique.

I walked up the two flights of stairs to Jessie’s third floor apartment down by the campus. I knocked and she opened the door immediately and did not hold back on an immediate scan of my expressions, posture, and mannerisms. Jessie was the queen of evaluation. It was how she got a grasp of what she was working with, or against, I supposed. Scan away.

“You look so pissed? What happened?”

“I got fired from the shoot,” I said. I breathed in, feeling the anger rise.

“The director’s wife thought I was hitting on him, had me canned.”

“You weren’t, were you?” Jessie asked.

I looked at her and thought,
some friend, the fuckin’ nerve,
but I knew she asked because I had made that mistake one time, when I was just eighteen. Well, I was twenty-three now, and I’d learned enough to know that I shouldn’t do that. It’s not worth it. “No, but…”

“No need to say more. I believe you. Let’s go and work-out. I checked the schedule at the gym and there’s a spin class if you’re up for it.”

“Maybe I can spin my ass all the way to Jamaica for a vacation,” I replied. “It’s the only one I’ll be able to afford for a long time.”

After we got out into my car, Jessie continued her questions, trying to find ways to help. She was so good and sweet; a real gem for putting up with me. I was so opposite of her, but it didn’t scare her. That was pretty cool.

“Any  new jobs on the horizon?” Jessie asked.

“No, I thought this one would be carrying me through the end of the year. It was a huge project, but now, it’s over.”

“No contract that states they can’t just do that?”

I looked at Jessie, loving the way her wheels were turning to find a solution. “Sadly, no. That’s not very common in this industry.”

“What really scares me is that situations like this spread easily in the community. If people start thinking I sleep my way up the chain, or I disrupt the flow, my name is going to be mud.”

“What?” I turned to Jessie and her big blue eyes widened and she pressed her palms on the dash.

I looked forward and slammed on my brakes. Some biker had decided to dart out in front of me. I laid on the horn, and I didn’t stop until Jessie pried my hands off the horn.

“Look, Trinity. I know this sucks, but you can’t come undone or you’ll never figure things out. Let’s drop the subject, spin to Jamaica, and then go to Gohrka Palace. But, only if you let me buy.”

“I invited you,” I protested. Then Jessie gave me the hand. She never did that. I protested and she didn’t say a word. Finally, I said, “Fine. I concede.”

Three hours later, I was dropping Jessie back off at her apartment, actually had a smile on my face, and didn’t feel like the entire word was going to crush me from its weight. People called it hope, I guess. It worked and Jessie had delivered, which she most always did. Everything seemed so easy and effortless for her. At first, I didn’t trust it and she bugged the shit out of me because of it, but Brynn had been close to her for a long time, since childhood, and I trusted Brynn, who was quirky and didn’t see the world through rose colored glasses. Well, I was so glad for my friendships with both Jessie and Brynn. They’d saved me from my dark side as much as they’d given me some great laughs.

In the confines of my tin can apartment, I could hear my phone ringing. It was the standard ring—the one that announced that I didn’t know the caller. Everyone of significance was tied to a ring tone that reminded me of them. I almost didn’t answer it. “Hello.”

“Is this Trinity Vanders?” a casual, male voice said.

Oh crap, a telemarketer
, I thought.

“That’s okay. This is Chaz Marx with TantrumX Productions. I was hoping you could forward me some head shots and video footage of some acting or modeling. We’re filling a spot for a music video. So, are you interested and do you have those things available?”

“Yes, I’m interested,” I said.  My voice seemed to rise an octave.

“Should I call you back when you have more time?” Chaz asked.

“It’s fine. I have time.” Yes, I was caught in a blatant lie designed to avoid any unwelcomed conversation. This conversation was welcomed, though. “What’s your email? I can collect those right now and send them over.”

After getting his email address, I asked, “Can you tell me what artist this is for? It might help me decide what footage to send over.”

“Sure. It’s for Hunter Martinez. He is part of ProVokaTiv, but doing a solo project.”

My stomach just about bounced out my throat. “Great,” I managed to say, not wanting to appear too eager. Gotta’ play the game.

“How long before I find out if I’m a good fit?”

“I’m guessing not long. We’re ready to start shooting as soon as the role is filled. You’d have to come out to LA. I assume that will not be a problem, Trinity?”

“You assume correctly, Chaz,” I said.

“Great. Well, I’ll be in touch.” He hung up from his end before I could say goodbye.

I stared at my cell phone, half wondering if I’d just dreamt it. OMG. This was unbelievable. “Brynn,” I said.  After all, it would make sense that she did the referral since her and Gauge, the lead singer of ProVokaTiv, were dating

I tried to call her. She didn’t answer.

A minute passed and I opened up my laptop, pulling up my headshots and videos. There were a lot. Which ones would I send?

My phone buzzed. I looked down to see Brynn responding.

Me: Just got a call to maybe be in a Hunter solo project video. Know anything about it?

Brynn: But you will.

Brynn: Of course I will.

Me: Have to go. Lots to do, and quickly. Keep you informed.

I looked through all my headshots and videos as quickly as I could, trying to pick the best options. I finally narrowed it down to two video clips and five pictures with various looks. I downloaded them and pressed send. Then I stared at my computer and plugged my phone in so it was charged in case I got a call. Honestly, I was acting ridiculous. I was too afraid to even go pee in case I missed a call, and there was no way I was going to talk to Chaz Marx while I was peeing, either.

Cassie's Choice by Donna Gallagher
The Killing Game by Anderson, Toni
On the Street Where you Live by Mary Higgins Clark
Spirit's Song by Madeline Baker
Intimate Illusions [The Callens 6] (Siren Publishing Ménage Everlasting) by Melody Snow Monroe
Secrets of the Wee Free Men and Discworld by Linda Washington
Natural Born Daddy by Sherryl Woods
Against All Odds (Arabesque) by Forster, Gwynne
Exiled by Workman, Rashelle
The Commitment by Kate Benson