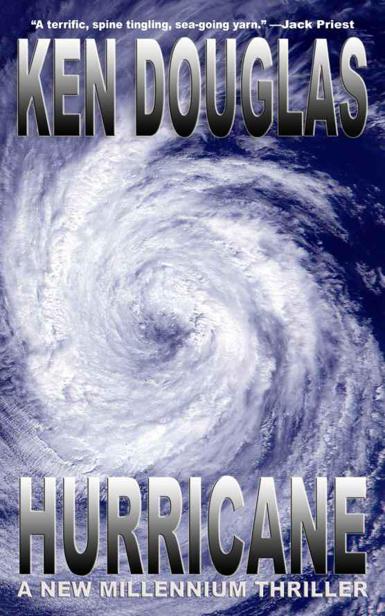 Bootleg Press is a registered trademark.

For my best friend

This should have been for you

the first time around, now it is.

Julie had the throttle wide open. She saw something red out at the first of the Five Islands and wondered what it was.

“
Mom, lookout!” Meiko shouted to be heard above the roar of the engine.

Julie pulled her eyes away from the small island and saw the log dead ahead. She shoved the throttle-tiller to the right and the dinghy jerked to the left.

Tammy screamed and fell over the side. She grabbed for the safety line, but her fingers found only air. Her scream was cut off when her head slid below the surface.

Julie panicked and accelerated when she meant to back off the gas. The dinghy shot forward like a race horse given its head, increasing the distance between the rubber boat and the woman in the water.

Julie backed off the gas.

“
She’s gonna be okay,” Meiko said. With the engine at idle, shouting was no longer necessary.

“
You sure?” Julie asked, turning the dinghy now that she had it under control.

“
Yeah, she’s dog paddling, but she’s caught in the current,” her daughter said.

Meiko stood in the dinghy and pointed to the floating log. Tammy saw it and started to paddle toward it. Meiko kept her eyes on the woman in the water, while Julie added power, and the engine died.

Tammy screamed, thrashing against the water, trying to stay afloat.

“
And she was doing so well,” Meiko said, kicking off her sandals. She dove over the side, swimming to Tammy with the long easy strokes of a professional swimmer. Meiko was twenty-one and her morning wasn’t complete without a hundred laps.

“
Damn,” Julie said. She pulled on the starter cord and the Evinrude answered with a staccato sputter.

“
Double damn.” She pulled the cord again. This time, not even a sputter. She pulled out the choke and pulled it a third time, but the engine was too hot for the choke.

“
Come on, Mom, hurry.” Julie barely heard her daughter. She glanced up and saw that Meiko had an arm wrapped around Tammy’s chest and she was pulling her away from the log, getting farther away from it with each powerful kick. Tammy wasn’t over her panic and was still struggling. Julie pushed the choke in and yanked on the cord, but the grip slipped out of her hand without a whimper from the Evinrude.

Julie grabbed onto the grip and jerked hard on the cord. The motor sprang to life in a cloud of gray smoke. She gave it gas for a second because she didn’t want it to die again, then she motored toward them.

“
Are you okay?” Julie said, bringing the boat along side them.

“
Grab and pull,” she sputtered. Julie grabbed onto the back of her blouse and pulled as Tammy struggled to get back into the dinghy. “Horrible,” she said once she was inside.

“
Not a log,” Meiko said. She ran her fingers through her long hair and squeezed the saltwater out.

“
Floater.” Tammy shook her head and let the water fly from her short hair like a shaggy dog.

That Julie understood and she motored over to the body.

“
I don’t care. Let’s go.” She turned away from the bloated body.

Julie started to take the line off the small anchor.

“
What are you doing?” Tammy asked.

“
Sure we can,” Tammy said. “We’ll call the police when we get back. They’ll take care of it.” Tammy said. She was used to getting her way.

“
By the time we get back the current will have the body halfway to the Bocas. And by the time the police get a hold of the coast guard and they get a launch out here, it’ll be through and into the open sea. They’ll never find it.”

There was a light breeze working against the southern Caribbean sun, but it was still hot in the bobbing dinghy. “How do you know it was murder?” Meiko asked, watching her mother tie a small bowline loop in the end of the anchor line.

“
A lot of African and Indian Trinidadians can’t swim,” Tammy said. “Sometimes they go too far out and get caught in the current. It’s not uncommon.”

“
I’m the exception, besides I would never go in the ocean, so I can’t drown.”

“
You almost did,” Meiko said.

Julie fed the line back through the small bowline loop and turned the anchor line into a sort of cowboy’s lasso. She pulled on it, testing its strength, before motoring over to the body. She put the engine in neutral as they approached. Tammy turned away and the dinghy bumped the dead man with a dull thud.

“
You sure you want to do this?” Tammy asked.

“
I don’t think we have any choice.” Julie reached over the side. She bit her lower lip, trying to take her mind off of her churning stomach. Up close the body stank. She held her breath and stretched her arm out, but her stomach heaved before she could get the line around the feet and she vomited over the side. The current had the body and by the time Julie stopped heaving it was several boat lengths away.

“
Me either,” Julie said. She splashed seawater on the side of the dinghy, cleaning it off. Then she looked out at the body again, frowned and turned toward Tammy. “We’ll do it your way and leave it for the cops.”

“
Oh, yes we can,” Tammy said. “We’ll just speed to the yacht club and call the coast guard. It’s their problem, that’s what they get paid for.”

“
Can’t we tow it to one of the islands and tie it to a tree?” Meiko said.

“
Even if we could get it there the corbeau birds would finish it off before we got to the yacht club. In fact I’m surprised they haven’t already,” Tammy said.

“
It must have just floated in.” Meiko looked up at the vultures circling above the small islands.

“
But from where?” Tammy asked.

“
I don’t think so,” Julie said. Then she gave it the gas, shooting the dinghy over the waves toward the yacht club.

“
They’ll never find it, you know,” Meiko said over the roar of the outboard.

“
Not our problem,” Tammy said. That was the last word spoken among the three women until Julie backed off the gas twenty minutes later and they were motoring into the yacht club.

There was a reception committee waiting for them as they approached Fallen Angel. Two men, one staring out at them with his hand in front of his face to shield his eyes from the sun. Sweat was beading up on his forehead and Julie wondered why he didn’t wipe it off. He stood straight backed and she thought that he probably even starched his tie. When they got closer she saw the sweat ringing his collar. His suit was cold British perfect on this hot Trinidadian day.

The other man wore a rumpled police uniform, and the way he shifted back and forth on his feet and refused to make eye contact told Julie that something was wrong. Both men were dark-skinned African Trinidadians.

“
Police,” Tammy said. “And they don’t look happy.” The uniformed officer looked at the ground as they approached. The other man caught Tammy’s gaze and held it for a second, then he also turned away.

“
How’d they know?” Meiko asked. Julie cut the engine. The still silence, coupled with the downcast eyes of the policemen, gave the morning a funereal atmosphere.

“
They don’t,” Julie said. “It’s something else.” She coasted the dinghy toward the swim ladder hanging over the starboard side of the boat. Tammy stood in the front with the painter in her hand and grabbed onto the ladder, stopping the forward motion of the dinghy. Then she tied the painter on to the lifelines with a double half hitch, before stepping onto the ladder and climbing up to the deck. Once up she turned to offer Meiko a hand. Julie followed her daughter and together the three of them faced the policemen on the dock.

“
What can we do for you boys?” Tammy asked. She lowered her head as she crossed under the boom.

The man in the suit raised his eyes and pretended a smile, showing two gold front teeth that did more to make him look like a rabbit that the tough image he was trying to project. But he didn’t speak.

Julie and Meiko crossed under the boom and stood next to Tammy, one on each side, but the sweating policeman had locked onto Tammy’s eyes and he couldn’t look away until she released him. She smiled and the policeman came to life.

“
Can we come aboard, Miss Drake?” the man asked, wiping the backs of his hands off on his pants. He might be used to the hot sun, but he was melting in front of Tammy Drake, Julie thought.

“
Mrs. Tanaka is the captain here,” Tammy said. “You’ll have to ask her.” Tammy turned to look at Julie and Julie nodded her head in assent. “She says, yes,” Tammy said. The two policemen stepped from the dock to the deck, both keeping a respectable distance from Tammy.

“
It’s hot. Would you men like something cold to drink?” Julie asked, as she slid open the forward hatch. A slight breeze started to pick up and Julie looked south to the mountains to see if there was going to be any rain.

“
I’d like a soda if you have one,” the uniformed man said. His voice was squeaky and high.

“
Yes a soda would be nice,” the policeman in the suit said, “if it’s not too much trouble.”