Read I am Not Your Melody: (steamy cowboy romance) Online

I am Not Your Melody: (steamy cowboy romance) 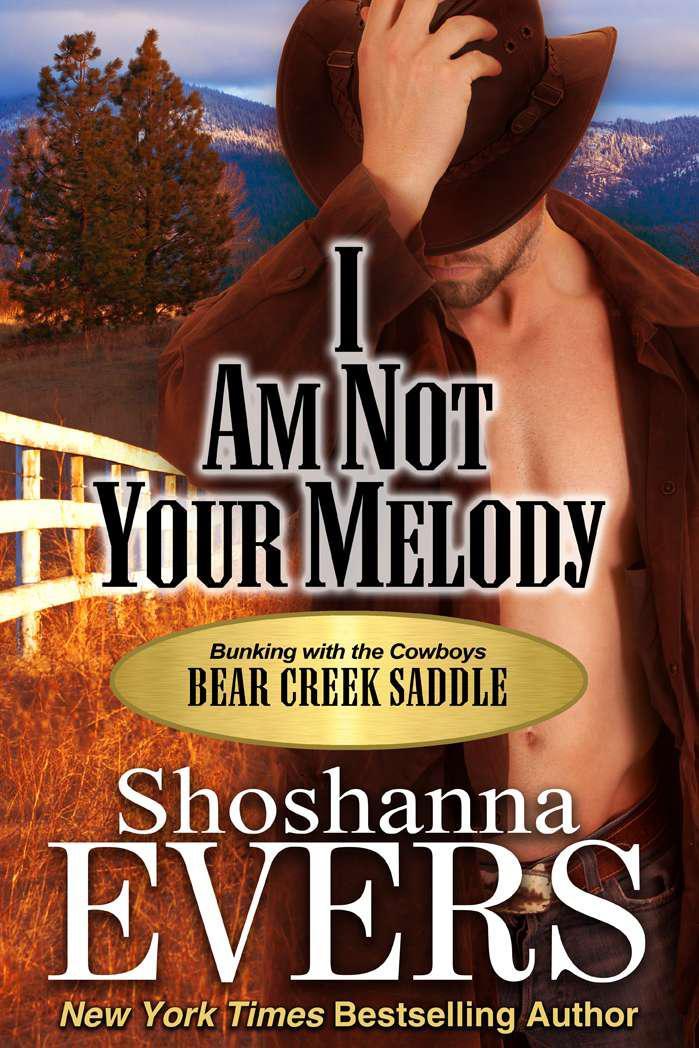 I am Not Your Melody

“Big Bad Bill” Edwards, the biggest, baddest cowboy in Bear Creek Saddle, Idaho, has only gotten meaner in the years since his bride Melody died young...

Allie, a bartender from Miami, has no idea what she’s getting into when she buys half-ownership of the sexy, broken cowboy’s late uncle’s bar. She’d thought they’d built a friendship based on several months of emails back and forth. But in person, Big Bad Bill will do anything to keep her at arm’s length… only he can’t. The man is sinfully sexy trouble — big trouble. Especially since Allie is just one year out from when her cheating ex destroyed their marriage.

How can Bill and Allie be together if their hearts can’t handle the risk of breaking once more?

Bill has just three rules for dealing with Allie: Don’t kill her. Don’t kiss her. And above all, don’t fall in love…not ever again.

I am Not Your Melody

Stand-alone Prequel to the Bunking with the Cowboys Series

This is a work of fiction. Any resemblance to persons living or dead or places, events or locations is coincidental.

This ebook is licensed for your personal enjoyment only. This ebook may not be re-sold or given away to other people. If you would like to share this book with another person, please purchase an additional copy for each reader. If you’re reading this book and did not purchase it, or it was not purchased for your use only, then please return to the ebook store of your choice and purchase your own copy. Thank you for respecting the hard work of this author.

The low gas light on Allie Crawford’s dash had been flashing for the last fifteen miles. She’d make it to Melody Ranch though, she
had
to. There was no more money in her bank account or cash in her wallet to fill up, in any case. But she’d never get there if she kept driving around in circles.

Cold wind found its way into the car’s back passenger-seat window, since it wouldn’t close that last eighth of an inch. And this wasn’t Miami-cold, aka sixty degrees Fahrenheit. No. It was only November and yet up here in the mountains of north Idaho, it may as well have been winter.

Then again, Allie had no clue what a real mountain winter was like, so, maybe this was normal “fall” weather here in Bear Creek Saddle?

She sighed. The small town — well, small in number (648 residents, according to the Welcome sign) but huge if you took into account the sprawling acreage — was laid out in a way no developer ever would have planned. Large mountains, evergreen trees, lakes, and creeks interrupted the land, and the roads followed the landscape — no matter how twisty and turny things got. Allie couldn’t even imagine having to traverse the roads when they were covered in ice and snow.

“I’m a reverse snowbird,” she murmured.

Everyone else goes south for winter, and Allie goes north. Of course.

Melody Ranch wasn’t easy to find, despite her GPS’s best efforts. It was as if the road to the ranch didn’t really exist. She’d need to get directions from a local.

A sign that read “Ginger’s General Store” caught her eye. Allie pulled over on the main street in town, sighing with relief when she got out of the car. Finally, a chance to stretch her legs.

She smoothed her clothes, rumpled from the seatbelt. At the Washington/Idaho border, she’d stopped at a rest stop and changed out of her comfy jeans and T-shirt into her emerald-green blouse, black pants, and heels from Payless that looked more expensive than they’d cost (to her eyes, at least).

This was her new life in a new town, and Allie intended on dressing the part of “successful business owner” starting with her very first face-to-face meeting with Bill Edwards. Which — if she managed to actually locate him — would be shortly.

But really, after the several months of email interaction they’d had, the cattle rancher who’d sold her a fifty percent share of his late uncle’s bar business (along with the apartment above the bar) wasn’t a stranger. Despite Bill Edwards’ no-nonsense emails at first, it hadn’t taken long for his personality and glimpses of life on Melody Ranch to shine through in his writing.

She liked to read his emails to herself in his accent, which she’d heard in one brief phone call early on. “Wait’ll you see the stars up here on a clear night, Allie… in the summer the guys an’ I camp out jus’ to see ‘em. Yeah, city-girl, I’ll teach ya to build a campfire they ain’t never seen in Miami… You’re gonna love it here.”

Now, though they’d never met — and she’d never even seen a pic of him for goodness sake, despite some late-night Googling — Allie knew
him
. He’d told her too much for him to be a stranger when they finally got to meet in person. They got along really well (online, at least). Maybe when they met, she’d skip the handshake and go straight to a hug?

There was something sexy about Bill. Nothing overt, just… hot. Dominant, maybe. His very alpha-maleness came through his emails.

Allie shook her head. It was silly to have feelings for a man she’d never met.

If she had contacted Bill to tell him she’d be showing up earlier than they’d agreed on, then he could have said no. And if he’d said no, she’d be screwed. Her money was tied up in the bar, and rent was due in Miami. She needed that apartment now, not in two weeks.

Better to ask for forgiveness than ask for permission, right? That’s exactly what she’d do when the man from the emails finally stood before her.

As soon as she figured out how to find him.

A bell rang to announce Allie’s presence when she pulled open the door to the general store. The place was a huge departure from the franchised, big-box stores she always shopped in, in Miami. Wooden tables were set up around the open space, each covered with a selection of goods. On one table, crates of fresh produce with “local” scrawled on a black chalkboard sign. On another table, piles of used paperbacks, fifty cents apiece. And there was jam, lined up in beautiful glass jars, hand-labeled with an artisan touch. Then there were the… fish hooks. And buckets of hard wheat.…

“Good mornin’,” the middle-aged woman behind the register counter called. “We just got in more huckleberry jam, if that’s what you’re lookin’ for!”

“Um…” Allie looked from the table of jam to the woman. It hadn’t occurred to her to look for huckleberry jam, but now that the woman mentioned, it did look good.

“Haven’t seen you before,” the woman said, stepping out from behind the counter. Her T-shirt proclaimed
I MAKE QUILTS. WHAT’S YOUR SUPERPOWER?

Bill had already warned her that news spread fast in a small town, and so her first impression on folks was even more important here than it would be if she were moving to a big city, where she could’ve counted on being relatively anonymous. Like that country song said, “Everybody Dies Famous in a Small Town.”

“Oh, how wonderful!” the woman effused, her round face expressing a mix of surprise and interest. “No one ever moves here, pretty much ever. I’m Ginger by the way, it’s on the sign.”

“Allie Crawford.” She tamped down her exhaustion from the road trip, and frustration with trying to find the ranch, so that she could smile warmly as she shook Ginger’s hand.

“What can I do ya for?” Ginger asked. She said in the sort of way a person asks when they actually want to know, rather than out of courtesy. “I saw you eyein’ the fishin’ hooks. We got fishin’ licenses here too, if ya need one.”

Allie laughed — she wouldn’t know how to fish if her life depended on it — but the offer hadn’t been a joke, so she stopped and just shook her head.

“I just can’t seem to find Melody Ranch,” she sighed, some of her earlier frustration creeping back into her voice. “I’m looking for Mr. Bill Edwards?”

Ginger raised her eyebrows, and meandered over to the big front windows of the store, where she peered out to stare at Allie’s car.

Big Bad Bill? Is she talking about the same Bill?

That wasn’t exactly true. He was expecting her two weeks from now. But when the first of the month came, she would’ve either had to pay another month of rent or leave her apartment. The long road trip cross-country from Florida to north Idaho was the best option.

She’d wait for the grand tour — and the keys — until Bill could show her the bar they now shared. Back in Miami, she’d thought she would be too excited to do anything else when she got here. That she’d roll into town, pull right up in front of “her” bar, and… what? Pee on the place to mark her territory? Plant a flag like she was on the moon?

Instead, Allie was content to find Bill first thing — her one and only contact in the whole state of Idaho.

Maybe her avoidance was a little bit because she was terrified. She might take one look at the building and business she’d bought a fifty percent share of sight unseen — relying only on emails and photos from a man who technically really was a complete stranger — and start freaking out.

What if she’d made a huge mistake?

Ginger shrugged her shoulders. “You prob’ly want to see Zach, or Eric. Or you know, Chris or Jay. Any of them can help you — the boys practically run the place now.”

“The boys... Bill has children?” Allie asked.
He never told me that
.

The woman laughed uproariously. “Could you imagine? Oh, you are a firecracker!” She paused to wipe her eyes, which had teared up at the apparent hilarity of Allie’s question.

“I take it Bill Edwards isn’t the children…type?” While Allie and Bill had never found a reason to speak about kids, it was surprising to hear that about him.

“No,” Ginger said, “I guess they ain’t really boys no-more — his ranchhands. Time flies, don’t it? Seems like yesterday they were runnin’ in here for pop after school, on their way to the ranch to work… but I guess that was oh, ten years ago?”

Ginger groaned, as if suddenly realizing a decade had passed without her noticing. “I tell ya, time flies, it just flies. Can’t even call ‘em boys any more.
Handsome
young men, all four of ‘em. Smart, too. It’s no wonder Big Bad Bill let ‘em take over everythin’!”

Allie smiled, still unsure of what was going on. The whole
Big Bad Bill
thing was disconcerting, as if she were about to encounter a villainous wolf.

“You married?” Ginger asked, a glint in her eye.

Allie grit her teeth. Of course, Ginger had no idea that was an extremely sore subject. Wasn’t her fault. But if Allie told the woman her former husband of ten short months had run away with his secretary, it would be all over town by nightfall.

The judge had annulled their marriage, as if it had never happened at all. She didn’t have to consider herself a divorcée. She’d just keep her own business to herself,
thankyouverymuch
. In Bear Creek Saddle, only Bill knew her past.