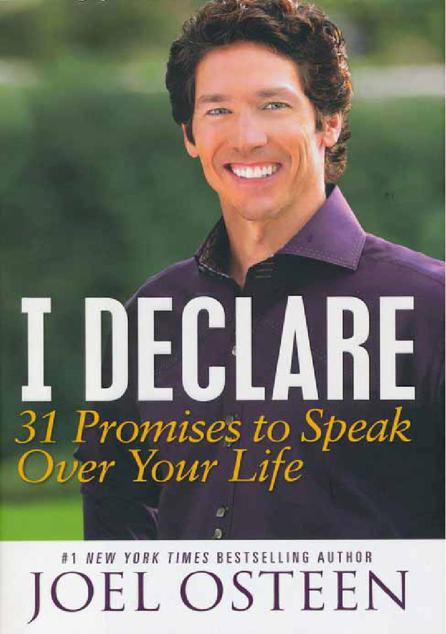 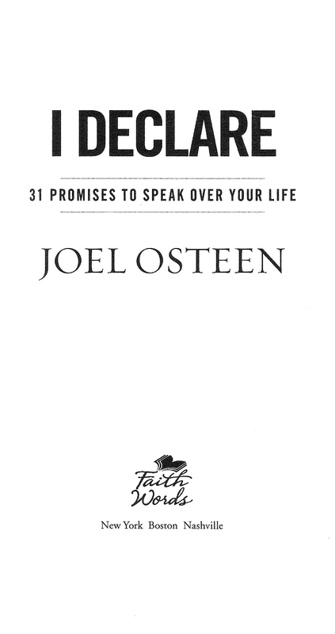 Our words have creative power. Whenever we speak something, either good or bad, we give life to what we are saying. Too many people say negative things about themselves, about their families, and about their futures. They say things such as, "I'll never be successful. This sickness will get the best of me. Business is so slow I don't think I will make it. Flu season is coming. I'll probably catch it."

They don't realize they are prophesying their futures. The Scripture says, "We will eat the fruit of our words." That means we will get exactly what we've been saying.

Here is the key; you've got to send your words out in the direction you want your life to go. You cannot talk defeat and expect to have victory. You can't talk lack and expect to have abundance. You will produce what you say. If you want to know what you will be like five years from now, just listen to what you are saying about yourself. With our words we can either bless our futures or we can curse our futures. That's why we should never say, "I'm not a good parent. I'm unattractive. I'm clumsy. I can't do anything right. I'll probably get laid off."

No, those thoughts may come to your mind, but don't make the mistake of verbalizing them. The moment you speak them out, you allow them to take root. There have been plenty of times where I've thought something negative and I'm just about to say it, but I'll catch myself and think, No. I'll zip it up. I'm not speaking defeat into my future. I'm not speaking failure over my life. I will turn it around and speak favor into my future. I will declare, "I'm blessed. I'm strong. I'm healthy. This will be a great year. "When you do that, you are blessing your future.

When we were looking to renovate the former Compaq Center in Houston so it could serve as the new Lakewood Church, our architects told us the project would cost millions more than we'd originally estimated. I was shocked by the figures they gave us. After I got up off the ground, I thought, That's impossible. I could never raise that much money. There is no way that will happen.

My declaration was, "God is supplying all of our needs. He is Jehovah-Jireh; the Lord our Provider. This may seem impossible but I know God can do the impossible. Where God gives vision He always provides provision."

If you're a baseball fan, you probably know who Jose Lima was. During the 1990s he was the star pitcher for the Houston Astros. One season he won twenty-one games and was considered one of the best pitchers in the league. But something interesting happened. When the Astros moved from the Astrodome to their new ballpark downtown, the fence in left field was much closer than the fence in the Astrodome. And of course, this favors the hitters. It makes it more difficult on the pitchers.

The first time Jose Lima went to the new ballpark he stood on the mound. When he looked out into left field and saw how close the fence was, the first words out of his mouth were, "I'll never be able to pitch in here. The fence is way too close."

Do you know he went from being a twenty-one-game winner to being a sixteen-game loser? It was one of the biggest negative turnarounds in Astros history. What happened? He prophesied his future. Those negative thoughts came, and instead of ignoring them, he made the mistake of speaking them out. When you speak it out you're giving life to your faith. As Proverbs 6:2 says, "We are snared by the words of our mouth."

When I was a boy there was a gentleman who owned the company that took care of our church grounds. He was a very nice man, kind and friendly. But he always had a negative report. Every time I talked to him he told me how hard life was and how business was slow and his equipment was breaking down. He was having problems at home. One of his children was acting up, on and on. I saw him twice a week for probably ten years. I cannot remember one time when he did not have a negative report. And I'm not making light of his situation. The point is he was prophesying defeat. He was cursing his future. He didn't realize he was being snared by the words of his mouth.

Sadly, when he was about fifty-five years old, he became very sick. He spent the next two or three years in and out of hospitals. He ended up dying a very sad and lonely death. I couldn't help but think that he had been predicting this sad end his entire life because he was always talking about how he would never make it to his retirement years. He got what he was calling in.

You give life to your faith by what you say. All through the day we should go around saying, "I have the favor of God. I can do all things through Christ. I am blessed. I'm strong. I'm healthy." When you do that you just blessed your life. You just spoke favor into your future. If you get up in the morning feeling the blahs don't ever say, "This will be a lousy day. I don't want to go to work. I'm tired of dealing with these children." No, get up and say, "This is going to be a great day. I'm excited about my future.

Something good is about to happen to me."

You should send your words out in the direction you want your life to go. Maybe you've been through a disappointment. A relationship didn't work out. You didn't get the promotion you were hoping for. But instead of complaining by saying, "Well, I should have known it. I never get any good breaks. Just my luck." No, your declaration should be, "I know when one door closes God will open up another door. What was meant for my harm God will use to my advantage. I'm not only coming out, I will come out better off than I was before."

Have a report of victory.

Here's what I've learned. You believe what you say about yourself more than what anybody else says. That's why on a regular basis we should say, "I'm blessed. I'm healthy. I'm strong. I'm valuable. I'm talented. I have a bright future." Those words go out of your mouth and come right back into your own ears. Over time they will create the same image on the inside.

I read about a doctor in Europe who had some very sick patients. They had been treated by traditional means but their health had not improved. So he gave them a very unusual prescription. He had them say three or four times an hour, "I am getting better and better, every day, in every way."

Over the next few months he had remarkable results. Many of those patients had not improved with traditional medications, but all of the sudden, they began to feel better and better.

What happened? As they heard themselves saying over and over, "I'm getting better. I'm improving. My health is coming back," those words began to create a new image on the inside. Before long, they started seeing themselves strong, healthy, and whole. Once you get a picture of it on the inside then God can bring it to pass on the outside. You could see your life go to a whole new level if you just zip up the negative words and start speaking faith and victory into your future.

I know people who are always tired and run-down. They are constantly saying, "I'm so tired. I just don't have any energy."

They've talked about it so long, it's become a reality. Do you know the more we talk about something, the more we draw it in? It's as if you are feeding it. If you get up in the morning and just talk about how you feel, how you're tired and how you won't make it, you are defeating yourself. You're digging your own hole.

exactly the opposite of how they feel."

In other words, don't talk about the way you are. Talk about the way you want to be. If you get up in the morning feeling tired and lethargic, instead of complaining more than ever, you need to declare, "I am strong in the Lord. I am full of energy. My strength is being renewed. This will be a great day."

When you do that it will not only change how you feel, it also will change your attitude. You won't go out with a weak, defeated, victim mentality. You will go out with a victor mentality, with a spring in your step, with a smile on your face, with your shoulders back. Those words can literally help lift your spirit and cause you to see yourself and your circumstances in a whole new light.

You are one of a kind. You are a masterpiece. You are a prized possession. When you wake up in the morning and look in the mirror instead of getting depressed, instead of saying, "Oh, man. Look how old I look. Look at this gray hair. Look at these wrinkles," you need to smile and say, "Good morning, you beautiful thing. Good morning, you handsome thing. Good morning, you blessed, prosperous, successful, strong, talented, creative, confident, secure, disciplined, focused, highly favored child of the Most High God." Get it on the inside. Speak faith over your future!

I DECLARE God's incredible blessings over my life. I will see an explosion of God's goodness, a sudden widespread increase. I will experience the surpassing greatness of God's favor. It will elevate me to a level higher than I ever dreamed of. Explosive blessings are coming my way. This is my declaration.

A friend of mine wanted to attend a major university, but he needed a scholarship to pay for his tuition. He applied many months before the school year started. Even though his grades were good enough to get into the school, he was informed that there were no more scholarships available. So, he enrolled in a junior college instead.

It looked like his dream of going to the major university was over. It looked like the situation was permanent. All the facts said it would not to happen. But just a few weeks before school was to start, the scholarship office called back and said something had opened up. Instead of offering him the two-year partial scholarship he had applied for, they offered him a four-year total scholarship; an explosive blessing.