Read I Have Iraq in My Shoe Online

I Have Iraq in My Shoe 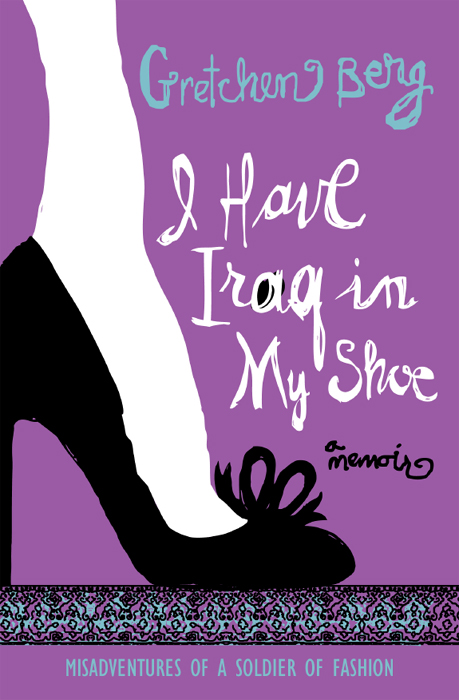 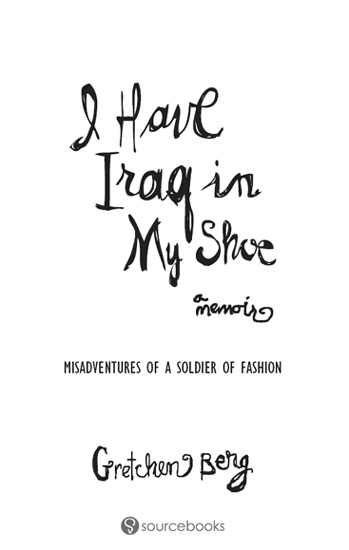 This book is a memoir. It reflects the author’s present recollections of her experiences over a period of years. Some names and characteristics have been changed, some events have been compressed, and some dialogue has been re-created.

I have Iraq in my shoe : misadventures of a soldier of fashion : a memoir / Gretchen Berg.

Chapter Four: Joan of Arc & She-Ra Will Work for Shoes

Chapter Six: As the Dude Turns

Chapter Seven: The Iraq—Welcome to Smell

Chapter Nine: “E” is for “Erbil” and “Embellishment”

Part 3:
The Honeymoon is Over

Chapter Twenty-seven: The Straw That Broke the Donkey’s Back

Chapter Thirty-one: He’s Just Not That into You

Chapter Thirty-five: The Joys of Travel

My job as a website copywriter was set to end in December, a very short two months away, and I had been sending out résumés since July, with a myriad of nothing to show for it—like when my dad would say to me, “You want to know what you’re getting for your birthday? Close your eyes. What do you see?” and then he would chuckle to himself.
Nothing.

Oh, the woes of impending unemployment. Why couldn’t potential employers recognize my amazing potential? Why?
Why?
In a perfect world they would coordinate with my grade school teachers and sort things out:

Mrs. Vivian, First-Grade Teacher:
Gretchen is not working up to her potential…

Something like that. Not having my amazing potential recognized was horribly discouraging. Other things to file under Horribly Discouraging were nagging credit card bills, rent, automobile insurance, health insurance, food, the inflated cost of gas…these were the reasons I found myself metaphorically clad in a dingy old dress, sitting crumpled on the dry, barren ground, a la Scarlett O’Hara, sobbing into my apron.

I fancied myself a modern-day Scarlett. Margaret Mitchell began her wildly romantic, sweeping epic with “Scarlett O’Hara was not beautiful,” and I love a heroine I can relate to.

Scarlett was also “strong and unscrupulous, passionate and earthy.”

Scarlett and I also shared similar views on the topic of war: “Fiddle-dee-dee. War, war, war. This war talk’s spoiling all the fun at every party this spring. I get so bored I could scream.” This was precisely my inner monologue when party talk turned to war in the Middle East, politics in general, or whatever was on the news last night.
No, I did not see that special report.
Project Runway
was on. I’m bored! Tell me my dress is pretty!

And Scarlett was highly inventive when it came to fashion. I haven’t yet turned my living-room curtains into a dress, but I did cut the ankle straps off a pair of platform peep-toes because they felt too restrictive.

You know what else was restrictive?
The recession
.

One day, in the middle of October, I was checking my voice mail, in the hopes that one of the résumés I had sent out had garnered some proper attention:

I hated it when my friend Warren called me “Gerts.” I had made the mistake of telling him that “Gerty” was a nickname unfortunately bestowed upon me in junior high by a group of mean boys whose main extracurricular activity was tormenting
. “Gerty Gertruuuuude
!”

Eeeesh. The sound of that name sent me reeling back to seventh grade, when I went home from school crying almost every day. Warren was the kind of person who assigned unflattering nicknames to nearly everyone he met as a way of subtly bullying them (like “Ham Hocks” for a girl who had saddlebags). I had saved him the trouble of conjuring a label for me—he just borrowed “Gerty.” Of course no one would know “Gerty” was offensive except me, but it takes a while to rid yourself of junior high torment. I’ll probably be over it by the time I’m eighty. I only tolerated Warren’s use of the nickname because he was really funny, and he made me laugh out loud.

We met back in 1995 while teaching English at a language academy in Seoul, South Korea, and clicked immediately. He was the brother I never wanted. Teaching fussy adolescents was often a challenge, and having Warren there for comic relief made it infinitely more bearable.

Fast forward to early 2007, twelve years after Korea, when I was working for a travel company in Seattle and Warren was back to teaching English again, this time in Dubai, United Arab Emirates. Dubai had the reputation of being the Vegas of the Middle East, and Warren made his life there sound like a dream: “tons of cash, private villa, Jet Skiing to private islands,” etc. He would always casually throw out a “You should come out here and teach! It’s great!” He was prone to wild exaggeration, but from his Facebook photos, it looked like he really was enjoying himself in the style in which he was perpetually yammering. Warren on a Jet Ski, Warren feeding camels, Warren posing in front of the famed Burj Al Arab—that last one was in sepia, which really added a touch of class to the album. He seemed to be in his element in the Middle East.

That was nice for him, but it was somewhere I had no desire to go.