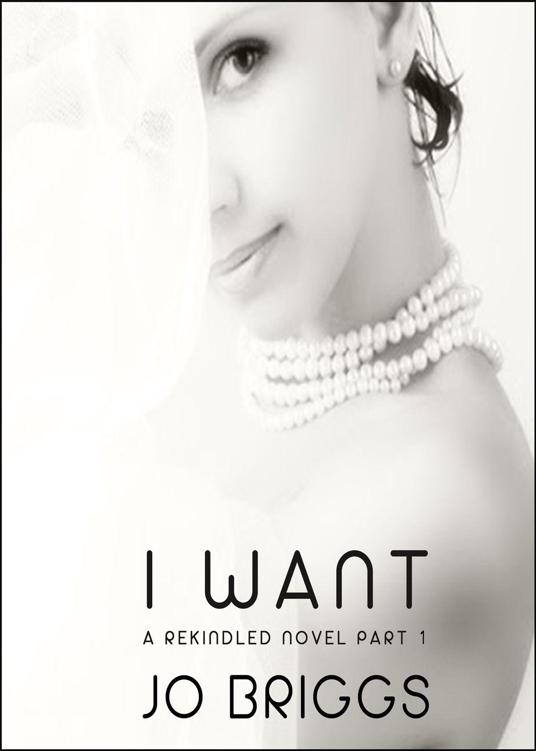 All rights reserved. This eBook is licensed for your personal
enjoyment only. This eBook is copyright material and must not be copied,
reproduced, transferred, distributed, leased, licensed or publicly performed or
used in any form without prior written permission of the publisher, as allowed
under the terms and conditions under which it was purchased or as strictly
permitted by applicable copyright law. Any unauthorised distribution,
circulation or use of this text may be a direct infringement of the author’s
rights, and those responsible may be liable in law accordingly. Thank you for
respecting the work of this author.

I want
is a work of fiction.
All names, characters, places and events portrayed in this book either are from
the author’s imagination or are used fictitiously. Any similarity to real
persons, living or dead, establishments, events, or location is purely coincidental
and not intended by the author.

Could a poor first impression be overcome, or will it always
leave a fundamental doubt in someone’s true nature? This thought troubled Elle,
as the arms of a certain presumptuous man drew her closer.

The man in question, William Dexter,
had a reputation for being somewhat aloof in society, and had offended Elle the
first night they met. She had overheard him call her a gold digger simply
because of her chosen profession of modelling. He rather snobbishly determined
that because of prior experiences of women outside his usual circle being
intent on catching him as an income source that her friendly manner meant she
shared the same intention.

The sense of presence
he exuded astounded her at first, his sapphire blue eyes twinkling with
something she could not quite explain. As they locked with her emerald-green
ones, it warmed her insides. Whatever it was only lasted a few moments, before
it shattered into a million of pieces. As soon as he opened his mouth, the
warmth replaced by resentment at his condescension, perhaps some might even
consider his attitude offensive, when he acknowledged the introduction of her
two sisters, and herself to the Bingham and Dexter group.

She still had not quite bring herself
to forgive him for this insult, but he had apologised and shown a more charming
side so she decided to place the unpleasantness to one side for the sake of her
sister. Her sister, Jess was dating William’s best friend, Charlie Bingham, and
it was inevitable she was going to have to get used to seeing William more and
more.

When she had agreed to be his date
she told herself, it was for the sake of Jess’s budding romance, but the nerve endings
on high alert all over her body told another story.

She had been so determined not to dance
with him, but here she was on the dance floor with him, his body pressed so
close up against her causing her stomach to flutter uncontrollably.

Trying to ignore all these new sensations, she glanced around
the room, noticing the jealousy expressed on most of the women's faces standing
around watching them. Even Elle could not deny that William Dexter was among
one of the sexiest men she had met, and she had met a fair few in her line of
work. Their envy bolstered her ego, as it was unheard of to see William Dexter
dancing in unfamiliar company.

The Benedict triplets were just coming
up to their eighteenth birthday and had been sharing a flat in London’s Notting
Hill for the past year. The girls’ parents were two successful travel writers,
who lived in a small estate, in Hertfordshire that had been in their family for
generations. Their Aunt and Uncle Gardiner mostly raised the girls until last
year, when the couple decided to move to New York.

In that year, Jess and Elle had become
successful models, and Cate showed considerable promise in her photographic
work. Her portfolio earned her the opportunity to help Lucas Potter, a renowned
photographer of both celebrity and fashion. Elle was the most efficacious of
the three of them; she had recently won a contract to be the face of a global
cosmetic company that meant she was appearing on billboards and TV commercials
all over Europe and America.

The girls were becoming regular attendants
of many charity dinners due to their rising celebrity status. These meetings
finally encouraged an otherwise shy Charlie to ask Jess on a date, several
months earlier.

“You seem lost in thought, Miss
Benedict” William’s voice spoke formally. His hot breath teased against her
ear, making it difficult for her to breathe without taking in his glorious scent.
The mix of Frankincense, vanilla and wood teasing at her nose as his voice
penetrated her thoughts, returning her to the reality. As her mind crashed into
the present, Elle became increasingly aware of his fingertips caressing the
bare skin of her back in time to the slow rhythm of the music.

“Umm, sorry was just enjoying the lyrics.”
She stumbled over her words. She could not help, but blush as he leaned back to
look intently at her face, she felt sure he could feel her body reacting
against his touch.

“Do you often let yourself drift away,
and immerse yourself into the words of a song?” He questioned, his usual air of
indifference had gone, as he seemed to take a genuine interest in what her
answer would be.

Elle smiled weakly under the continued
power of his gaze, as he awaited her reply. “Yes, it’s an excellent way to
relax. I like the sense of storytelling each song invokes, the writer opening a
window into a make-believe world that they have created.”

Her response intrigued William; he
felt drawn to her since the first night. He never meant to be so blunt in his assessment,
but Charlie had been goading him to dance all evening, an activity he hated
when in unfamiliar company. By the time, he met Elle and her sister he was in a
foul mood. The error mortified him even now.

He had been trying to make amends since
then. It took him several attempts at apologising and asking her to dinner,
before she begrudgingly accepted his wish to be his dinner partner to this
event. Her resistance towards him drew him to her even more. He was used to
women falling at his feet, but she was not like that. He had come to enjoy their
verbal battles, which ensued when she gave a candid opinion on whatever topic
they had been discussing.

Her sexy curves were on his mind constantly.
He was so tempted to pursue her until she agreed to be his. With her vivacious
personality, and the caring attitude around the charities, she supported
through the charity functions, had made him decide she was the woman he needed
by his side. He just needed to get her share this point of view! Simple enough,
you would think, and maybe it would have been if he had not been so stupid as
to insult her. Now he was paying the cost of having to work harder to get her
to like him. But, the sensation of her in his arms felt so right; he knew she
was worth any hardship.

Despite having the responsibility of
business assets worth well over £10 billion, he would prefer to spend his life
away in his Derbyshire writing songs. The motivation of having someone like
Elle in his life was just what he needed to start changing his priorities, and
hand over more to his brother, Evan.

“I agree, a writer is giving you a
piece of his or her life to experience.” He answered, as the dance came to end.
He offered her a reassuring smile, as he escorted her back to the table, they were
sharing with the rest of their group.

William sharing a similar view on music
caught Elle off guard in her earlier assumptions of his character; she presumed
him to be too conservative.

They continued to talk about music
for the rest of the evening. After making sure that Evan would accompany their sister
home safely, they took a cab back to Elle’s house that she shared with her
sisters.

Asking the cab to wait for a moment,
he walked her up the stone steps to her front door.

“Thank you for agreeing to go to dinner
with me tonight.” He began, his voice strained with nervous energy. His eyes
were gazing at her luscious lips as the trace of lip-gloss glistened from the
diffused porch light above them.
I wonder if it’s too early to kiss her. How
I would love tasting her soft lips on mine.

“Thank you for asking me, I enjoyed
myself.” She smiled nervously back at him. Her tongue flicked over her lips
subconsciously, as she felt his gaze upon them. Her own gaze fell upon his lips
unintentionally, as she remembered the beautiful smile that adorned them periodically
throughout the evening, when he glanced her way. She wished he would smile more
openly as it brought out the dimple on his cheek, softened the hard mask he
sometimes wore upon his features.

“I am glad; could I ask you out
to dinner again tomorrow?” The beautiful smile was back.

“Ohh,” she started; she truly was not
expecting him to ask her out on another date - not that she did not want to see
him again; rather, she was just astonished by his eagerness. She had shocked
herself by enjoying his company so easily after their poor start. His smile
began to decline at this hesitant response. “I will be in Prague tomorrow night
for a photo shoot, but I will return by the following day. Would you be available
for dinner then instead?” She blurted out, as she became aware that she was
taking too long to respond.

“Yes, I can be free then.” He knew
there was a prior engagement in his diary, but he would change it. He wanted to
spend as much time as she would allow him.

“Ok, well text me the details of the
restaurant, and I will meet you there.”

“If you give me your mobile, I can
put my number in for you.”

He handed over his smartphone, and
she entered her details in there for him.

“I guess I had better let you get
inside,” he said as he observed her shiver slightly. She smiled shyly as she
noticed him begin to lean closer.
Oh goodness, he is going to kiss me,
feeling excited by the prospect. She honestly could not believe how in one
evening, she had gone from hostility, to wanting to kiss him.

He leaned in and kissed her, but his
lips landed on her cheek, rather than her lips. She felt disappointed by this.