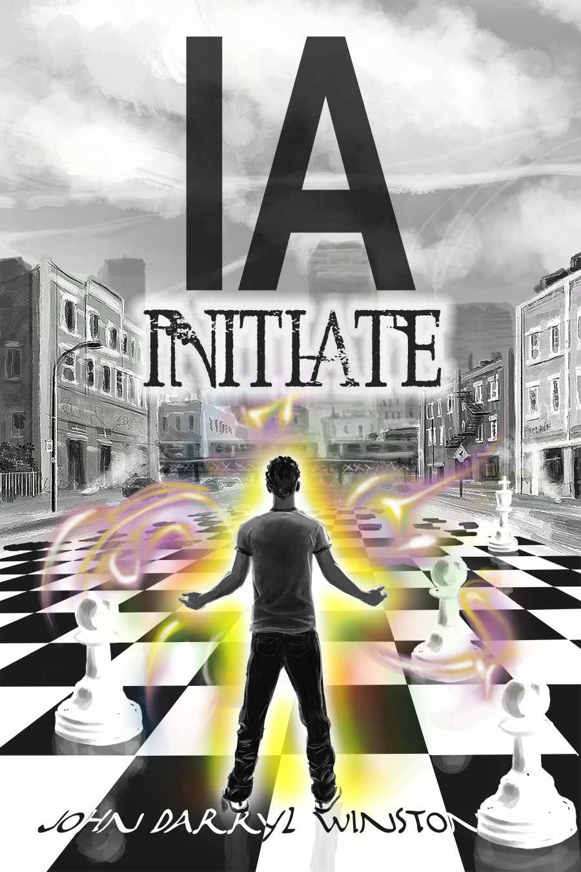 No part of this publication may be reproduced, stored in a retrieval system, or transmitted in any form or by any means, electronic, mechanical, photocopying, recording, or otherwise, without written permission of the publisher. For information regarding permission, write to Purple Ash Press, Attention: Permissions Department,

Summary: Thirteen-year-old Naz Andersen’s journey of self-discovery is catalyzed by his struggle to evade members of a notorious street gang which leads to discoveries about his supernatural abilities.

The text type was set in Adobe Garamond Pro.

For my daughter, Marquette Winston, the real Meridian and my son, John Darryl Winston II—the greatest musical artist the world has never known. He will find his way … back.

A SPECIAL THANK-YOU to my father, Johnnie Winston and the rest of my family for their love, support, and forbearance throughout this long process and who have always encouraged me in everything I do.

My agent and publisher, Dominique Wilson—we are the corporation and my sister and editor … Valerie Winston. She hates those three dots.

Montae Crawford, one of my former 8
th
grade students and target audience members and his inspiring words, “It was addictive; I couldn’t put it down” referring to the two days it took him to read the first draft of my 400-plus page unfinished manuscript.

1. to cause something, especially an important event or process to begin

An
auditorium is filled with admirers who are anxiously waiting to hear the cutting-edge theories of leading scientist, Dr. Cornelius Andersen. The brilliant young scientist in a striking black tuxedo and hair wild atop his head is waiting backstage in the auditorium for his introduction. With him is his beautiful wife, Camille, in an elegant, lavender gown. The air is electric this evening. Rumor has it that Dr. Andersen will shock the scientific community with an announcement of groundbreaking discovery.

“So, you still think this is a bad idea, honey?” asks Cornelius.

“You don’t even have to ask. You know how I feel,” says Camille, shaking her head.

“Now watch this. Wasn’t it you who always told me that if I went with my heart, then it was the right thing to do?”

“I know. But sometimes it’s not always about right or wrong, Cory. Sometimes it’s about having a good reason.” She puts her hand on her stomach acknowledging her unborn child and looks at him. “And this, your family, should be good enough reason for you to let it go.”

He smiles and places his hand on top of hers. “But don’t you see? That’s just it. This is for us, all of us. It’s for you and me ... and him,” he says, looking at her stomach. “Things are changing all around us, Cam, and not for the better. You know that. These discoveries will not only change the world, but they will also give our son an advantage—abilities we can only imagine. He will be a king among men, even more.”

“It just doesn’t seem right. Why can’t he ... why can’t we, just be normal, like everybody else?”

“Because to the normal—the average every day folk—freedom is an illusion.” Seemingly from nowhere, he produces a shiny brass, odd-shaped skeleton key, as if he has pulled it from the sky. “Something to be divvied up by the ones in power, the ones who stand above, at the whim of others.” He makes a throwing motion upward, the key disappears into thin air, and fine, silver dust appears in its place. “But for those of us who know where our real power resides, for those of us who have the courage to challenge those powers and the will to do what is necessary, we will possess the key to unlock the door to any desire imaginable ... the only true freedom.” He slowly pulls her hand away from her stomach to reveal the shiny brass key that is now resting in her palm. She smiles and closes her hand around it.

“Are you ready, Dr. Andersen?” asks the Master of Ceremonies, as he startles Camille by approaching the couple from behind.

“I am, sir,” replies Cory confidently.

“And let me say that I am honored to have the opportunity to meet you and introduce you all in one night,” the man adds.

As the Master of Ceremonies makes his way to the podium, the murmuring from the audience dwindles to silence.

“Trust me,” reassures Cory with a confident smile on his face.

“Ladies and gentlemen,” the Master of Ceremonies begins, “I stand before you in awe. I’ve just had the pleasure of meeting the person I am about to introduce to you this evening. He is a person who truly needs no introduction. He is an alumnus and adjunct professor of particle physics at our own Harvard University. He received his PhD from Cambridge University. He is a recipient of the Copley Medal, the oldest and most prestigious award given by the Royal Society of London. He has recently been awarded the J.J. Sakuri Prize for Theoretical Particle Physics.”

“You didn’t tell me about that one,” says Camille with a surprised look on her face.

“Last year he applied a new complex mathematical model created from Albert Einstein’s General Theory of Relativity,” continued the Master of Ceremonies. “And he is the youngest scientist ever to receive a Nobel Prize in Physics. I give you, Dr. Cornelius Andersen.”

The entire audience—scientists, mathematicians, alumni, students, faculty, and reps from the media—rises and gives thunderous applause as Cory makes his way to the podium.

It
is the city, a city that never dies although some of its inhabitants meet that fate daily. The city lives and breathes day and night, dark or light. In contrast to the city’s downtown with its skyscrapers, arenas, and casinos, the northern neighborhoods are like a sea of identical blocks attached to a grid of intersecting lines. Suburbanites pass through the city into its downtown then return to their perfect palaces. This image from high above suggests a pattern of order that is betrayed by the chaos found below where uncertainty is the only certainty and chaos the only order. This chaos is reverently referred to with pride by its indigenous population as the Exclave.

Smoke and its accompanying aromas fill the hot humid air on this early, late summer morning. There is smoke from late night and early morning cooking, smoke from all manner of narcotics, and smoke from smoldering house fires set and put out through the night—although some are still ablaze.

And there are the sounds that set this scene: a dog barking relentlessly, sporadic gunfire, sirens in the distance, a train that passes through like clockwork, and a constant beat and rhythm coming from somewhere … everywhere … nowhere, that define the “silence” of the Exclave at dawn.

It is feared by those who are on the outside and rightly so. But it is home to those inside its invisible walls. Like a modern-day Troy, it is safe haven for some; however, for others, it is a place from which there is no escape. But there are a few that see bigger things and different places—other worlds.