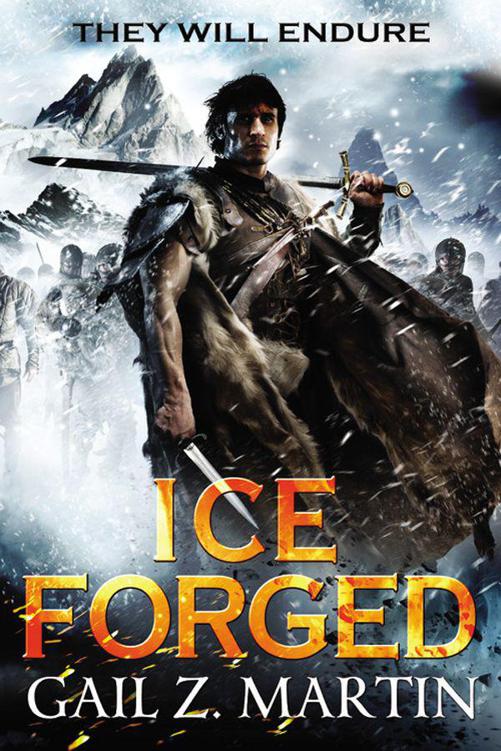 A Preview of
The Dragon’s Path

Thanks first of all to my husband, Larry, and my children Kyrie, Chandler, and Cody, who are (very) patient about living with a writer. Thanks also to my con and Rennie friends, who ease the stress of travel, to my Meetup group and social media friends who help keep me sorta sane, to John for being a great beta reader, and to all the wonderful bookstores, Renaissance festivals, and conventions that have welcomed me and my books. Thanks to the great folks at Orbit and to my agent, Ethan Ellenberg, for believing in me. And thanks especially to my readers, who make all this possible.

T
HIS HAS TO END.” BLAINE M
c
FADDEN LOOKED
at his sister Mari huddled in the bed, covers drawn up to her chin. She was sobbing hard enough that it nearly robbed her of breath and was leaning against Aunt Judith, who murmured consolations. Just sixteen, Mari looked small and lost. A vivid bruise marked one cheek. She struggled to hold her nightgown together where it had been ripped down the front.

“I’m upsetting her? Father’s the one to blame for this. That drunken son of a bitch…” Blaine’s right hand opened and closed, itching for the pommel of his sword.

“Blaine…” Judith’s voice warned him off.

“After what he did… you stand up for him?”

Judith McFadden Ainsworth raised her head to meet his gaze. She was a thin, handsome woman in her middle years; and when she dressed for court, it was still possible to see a glimpse of the beauty she had been in her youth. Tonight, she looked worn. “Of course not.”

“I’m sick of his rages. Sick of being beaten when he’s on one of his binges…”

Judith’s lips quirked. “You’ve been too tall for him to beat for years now.”

At twenty years old and a few inches over six feet tall, Blaine stood a hand’s breadth taller than Lord McFadden. While he had his mother’s dark chestnut hair, his blue eyes were a match in color and determination to his father’s. Blaine had always been secretly pleased that while he resembled his father enough to avoid questions of paternity, in build and features he took after his mother’s side of the family. Where his father was short and round, Blaine was tall and rangy. Ian McFadden’s features had the smashed look of a brawler; Blaine’s were more regular, and if not quite handsome, better than passable. He was honest enough to know that though he might not be the first man in a room to catch a lady’s eye, he was pleasant enough in face and manner to attract the attention of at least one female by the end of the evening. The work he did around the manor and its lands had filled out his chest and arms. He was no longer the small, thin boy his father caned for the slightest infraction.

“He killed our mother when she got between him and me. He took his temper out on my hide until I was tall enough to fight back. He started beating Carr when I got too big to thrash. I had to put his horse down after he’d beaten it and broken its legs. Now this… it has to stop!”

“Blaine, please.” Judith turned, and Blaine could see tears in her eyes. “Anything you do will only make it worse. I know my brother’s tempers better than anyone.” Absently, she stroked Mari’s hair.

“By the gods… did he…” But the shamed look on Judith’s face as she turned away answered Blaine’s question.

“I’ll kill that son of a bitch,” Blaine muttered, turning away and sprinting down the hall.

He took the stairs at a run. Above the fireplace in the parlor hung two broadswords, weapons that had once belonged to his grandfather. Blaine snatched down the lowest broadsword. Its grip felt heavy and familiar in his hand.

“Master Blaine…” Edward followed him into the room. The elderly man was alarmed as his gaze fell from Blaine’s face to the weapon in his hand. Edward had been Glenreith’s seneschal for longer than Blaine had been alive. Edward: the expert manager, the budget master, and the family’s secret-keeper.

Blaine caught Edward by the arm and Edward shrank back from his gaze. “My whore-spawned father, that’s who. Where is he?”

“Master Blaine, I beg you…”

“He headed for the gardens. He had his pipe with him.”

Blaine headed for the manor’s front entrance at a dead run. Judith was halfway down the stairs. “Blaine, think about this. Blaine—”

He flung open the door so hard that it crashed against the wall. Blaine ran down the manor’s sweeping stone steps. A full moon lit the sloping lawn well enough for Blaine to make out the figure of a man in the distance, strolling down the carriage lane. The smell of his father’s pipe smoke wafted back to him, as hated as the odor of camphor that always clung to Lord McFadden’s clothing.

The older man turned at the sound of Blaine’s running footsteps. “You bastard! You bloody bastard!” Blaine shouted.

Lord Ian McFadden’s eyes narrowed as he saw the sword in Blaine’s hand. Dropping his pipe, the man grabbed a rake that leaned against the stone fence edging the carriageway. He held its thick oak handle across his body like a staff. Lord McFadden might be well into his fifth decade, but in his youth he had been an officer in the king’s army, where he had earned King Merrill’s notice and his gratitude. “Go back inside, boy. Don’t make me hurt you.”

Blaine did not slow down or lower his sword. “Why? Why Mari? There’s no shortage of court whores. Why Mari?”

Lord McFadden’s face reddened. “Because I can. Now drop that sword if you know what’s good for you.”

Blaine’s blood thundered in his ears. In the distance, he could hear Judith screaming his name.

“I guess this cur needs to be taught a lesson.” Lord McFadden swung at Blaine with enough force to have shattered his skull if Blaine had not ducked the heavy rake. McFadden gave a roar and swung again, but Blaine lurched forward, taking the blow on his shoulder to get inside McFadden’s guard. The broadsword sank hilt-deep into the man’s chest, slicing through his waistcoat.

Lord McFadden’s body shuddered, and he dropped the rake. He met Blaine’s gaze, his eyes wide with surprise. “Didn’t think you had it in you,” he gasped.

Behind him, Blaine could hear footsteps pounding on the cobblestones; he heard panicked shouts and Judith’s scream. Nothing mattered to him, nothing at all except for the ashen face of his father. Blood soaked Lord McFadden’s clothing, and gobbets of it splashed Blaine’s hand and shirt. He gasped for breath, his mouth working like a hooked fish out of water. Blaine let him slide from the sword, watched numbly as his
father fell backward onto the carriageway in a spreading pool of blood.

“Master Blaine, what have you done?” Selden, the groundskeeper, was the first to reach the scene. He gazed in horror at Lord McFadden, who lay twitching on the ground, breathing in labored, slow gasps.

Blaine’s grip tightened on the sword in his hand. “Something someone should have done years ago.”

A crowd of servants was gathering; Blaine could hear their whispers and the sound of their steps on the cobblestones. “Blaine! Blaine!” He barely recognized Judith’s voice. Raw from screaming, choked with tears, his aunt must have gathered her skirts like a milkmaid to run from the house this quickly. “Let me through!”

Heaving for breath, Judith pushed past Selden and grabbed Blaine’s left arm to steady herself. “Oh, by the gods, Blaine, what will become of us now?”

“Blaine, can you hear me?” Judith was shaking his left arm. Her tone had regained control, alarmed but no longer panicked.

“He swung first,” Blaine replied distantly. “I don’t think he realized, until the end, that I actually meant to do it.”

“When the king hears—”

Blaine snapped back to himself and turned toward Judith. “Say nothing about Mari to anyone,” he growled in a voice low enough that only she could hear. “I’ll pay the consequences. But it’s for naught if she’s shamed. I’ve thrown my life away for nothing if she’s dishonored.” He dropped the bloody sword, gripping Judith by the forearm. “Swear to it.”

Judith’s eyes were wide, but Blaine could see she was calm. “I swear.”

Selden and several of the other servants moved around them, giving Blaine a wary glance as they bent to carry Lord McFadden’s body back to the manor.

“The king will find out. He’ll take your title… Oh, Blaine, you’ll hang for this.”

Blaine swallowed hard. A knot of fear tightened in his stomach as he stared at the blood on his hand and the darkening stain on the cobblestones.
Better to die avenged than crouch like a beaten dog.
He met Judith’s eyes and a wave of cold resignation washed over him.

“He won’t hurt Mari or Carr again. Ever. Carr will inherit when he’s old enough. Odds are the king will name you guardian until then. Nothing will change—”

“Except that you’ll hang for murder,” Judith said miserably.

“Yes,” Blaine replied, folding his aunt against his chest as she sobbed. “Except for that.”

“You have been charged with murder. Murder of a lord, and murder of your own father.” King Merrill’s voice thundered through the judgment hall. “How do you plead?” A muted buzz of whispered conversation hummed from the packed audience in the galleries. Blaine McFadden knelt where the guards had forced him down, shackled at the wrists and ankles, his long brown hair hanging loose around his face. Unshaven and filthy from more than a week in the king’s dungeon, he lifted his head to look at the king defiantly.