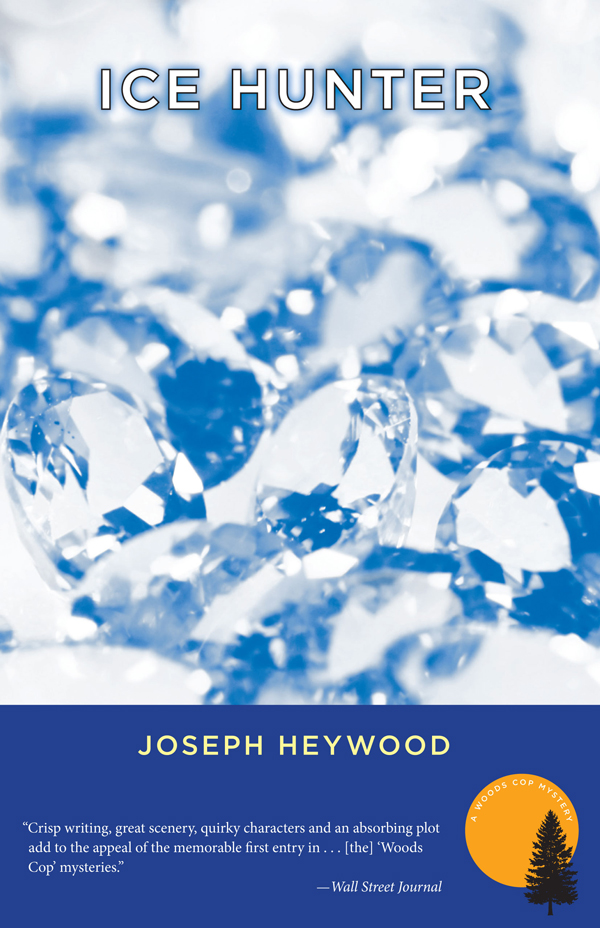 AN IMPRINT OF THE GLOBE PEQUOT PRESS

ALL RIGHTS RESERVED. No part of this book may be reproduced or transmitted in any form by any means, electronic or mechanical, including photocopying and recording, or by any information storage and retrieval system, except as may be expressly permitted in writing from the publisher. Requests for permission should be addressed to The Globe Pequot Press, Attn: Rights and Permissions Department, P.O. Box 480, Guilford, CT 06437.

The Lyons Press is an imprint of The Globe Pequot Press.

This novel and those to follow in the series are dedicated to the elite corps of more than two hundred men and women who wear the gold badge of conservation officers andserve the people and natural treasures of Michigan in ways and to degrees those of us who are served can hardly imagine. 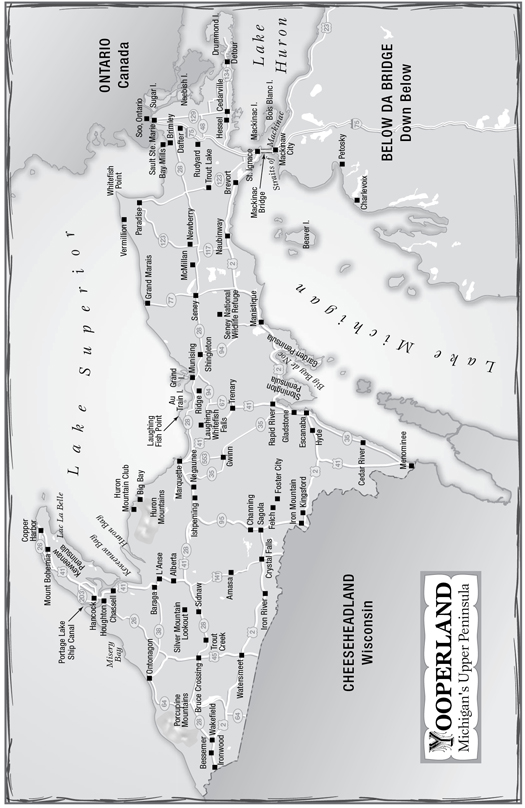 It was the week after his sixteenth birthday, four days after deer season had opened. Michigan's Upper Peninsula was blanketed in heavy wet snow. His father was out on patrol and Grady Service was buttoning up for the night when he saw headlights flash across the front of the house and heard a car door open and slam.

Grady went to the front door and peered out though the curtain.

There stood Conservation Officer Pease DuPlechet, his father's closest friend and one of the old man's regular drinking buds. Like his father, DuPlechet was a World War II veteran. A gunner on a destroyer at Okinawa when kamikazes struck, he had earned the Navy Cross stubbornly manning his gun through the bloody attack. He was a small, pugfaced man with leathery skin and a whitewall haircut.

Usually Pease just came in but this time he stood there fidgeting.

When Grady opened the door, DuPlechet flicked away his cigarette and stood rigidly. “Grady, your dad's dead.”

The boy showed no emotion. The old man had always taken life head-on. The only son was expected to do no less.

“No varnish on this, kid. He stopped up to the Two-Woof Camp and had one too many. On the way out he stopped to help some hunters and got hit by a truck. He shouldn't have been boozing on the job, but that's done now and it's never gonna get said again. You've got a right to know the truth.”

“Thanks.” The only word Grady Service could manage.

DuPlechet handed him his father's wool overcoat, the amorphous garment COs called a horseblanket. “He'd want you to have this,” his father's friend declared. “You want me to stay?”

A gorge rose in the boy's throat. “I'll be all right.” He had always been all right and always alone, his father out chasing poachers or drinking with his friends. He watched Pease DuPlechet drive away, closed the door, turned on a light, and looked at the coat, which was stained with blood.

No tears were shed, no sorrow racked him, and he did not mourn. He behaved the way the son of Gibson Service would be expected to behave.

Conservation officers and DNR personnel came from all over the state to the funeral in Negaunee, where his father had been born. The cemetery was crowded with dignitaries, uniformed officers, and reporters. Michigan's governor gave the eulogy.

Silken words were purred over a cold corpse, the congressman declaring his father “an original and a hero.” The surviving son stood stiffly in the bloodstained green overcoat, not hearing the words and thinking that he was even more alone now than before.

It was late in the third period of the annual battle with Michigan Tech, whose ice hockey team soared among the elite of the country every year while Northern Michigan University's new varsity program struggled to earn respect in the NCAA hockey community. They had played twice in two years and Northern had been twice humiliated, but tonight the teams were playing evenly and scoreless.

Grady Service had played hockey most of his young life, and now as a senior he was captain of the green-and-gold-clad Wildcats. As a left-winger his job was less scoring goals than punishing the opposition, a job he undertook with passion. His opposing winger was a muscular Canadian from Toronto, a two-year All-American who would no doubt move on to the National Hockey League when he graduated. The winger, Toby Blanck, had size and speed and the disposition of a wolverine guarding a fresh kill. For two periods Service and Blanck had shadowed each other relentlessly, each hammering the other every time the puck was touched. Both of them played with a ferocity that caused others to veer clear of them at every opportunity.

Service felt his coach tap his shoulder pad to tell him he was up next, then lean down to whisper, “We need a dinger, Grady.”

The line changed on a whistle for an offside and Service moved into position beside Blanck.

“Your asshole a little tight?” Blanck hissed as they waited for the linesman to drop the puck.

Service said nothing. When the puck was dropped he leaned into Blanck and tied up his stick as the puck was flicked backward. He immediately disengaged and cut toward the boards, keeping his head up. Blanck was caught by surprise by the burst of speed and grunted to catch up. Service heard the other player's skates crunching the ice in pursuit.

The puck bounded softly off the boards onto Service's stick. Realizing that Blanck had him lined up, he cupped the puck gently with his blade, dug his skate blade edges into the ice, and let the pursuing winger's momentum carry him past. With Blanck beyond him, Grady Service cut straight to the slot, looking for his center or the other wing to pass to, but no green socks appeared in his peripheral vision. No choice but to try to split the two defensemen, who were trying to pinch him. He dug hard, pushing the puck ahead of him, his mind racing as knowledge and instinct mixed.

Blanck would be right behind him in angry pursuit, but Service did not let his presence cut into his concentration. He aimed for a point between the converging defenders then slid the puck outside to the right, rammed his left shoulder against the left shoulder of the nearest defenseman, and bounced past him, gathering the puck back to his stick. Grady found himself one on one against the goalie. He faked to the keeper's catching glove then cut sharply to his own left, flipping a sharp backhander low over the goalie's stick.

He did not see the puck go into the net. He heard the start of a roar from the fans and then felt himself driven hard into the boards behind the net. As he bounced off he felt fists pounding on the side of his head. He dropped his gloves, took a stride to get separation, and saw the wild eyes of Blanck. There was no time to think. He grabbed Blanck's sweater with both hands, freed his right hand, and began punching wildly.

The next thing he knew Blanck was on his back unconscious and bleeding as teammates pulled Service away.

Grady watched from the penalty box as trainers carried Blanck off the ice on a stretcher. He shuddered at the huge stain of blood coagulating on the slushy ice behind the net.

The locker room was bedlam afterward. His coach gave him the game puck. Northern had won 1â0, its first win over its archrival. It was a meaningless victory. Tech was headed for the playoffs and Northern had long ago slipped out of contention for the postseason.

After showering and getting dressed, Grady stepped out of the locker room to find a man in a baggy suit and garish flowered tie waiting in the tunnel. The man wore a charcoal-gray fedora with a small red feather in the hatband.

He looked at Service's bloodstained green wool coat and said, “You'll need a new coat when you hit the Bigs. I'm Billy Veach, head scout for the Red Wings. We like your game, Service. Tell the truth, we don't care much for the college game, but we've watched you a long time and we think you can play. We're going to draft you this summer and you'll get an invite to camp in the fall. What to you think about that?”

Veach, an NHL all-star in his playing days, looked perplexed. “The hell you say?”

“The sawbones are looking him over, eh? Overrated, that bugger. Good size, but a pretty boy. You put him in his place.”

“Hey, breaks of the game, Service. You give and you take.”

Service headed for the opposing locker room and Veach followed, slipping a card into the young player's coat pocket.

Tech's coach was John McInnes, a legend in college hockey. As soon as he saw Service, he said, “Toby's gonna be okay.”

“Hell, we all know that. You just did your job, and he took the first swing. Let's mark her down to frustration and be done with it.” The famous coach stuck out his hand. “Good luck in the NHL, eh?”

But Toby Blanck was not okay. His skull was fractured and he was critical for nearly a week before pulling through. A surgeon was flown up from Ann Arbor and operated, declaring afterward that he had put a metal plate in the player's head and his hockey career was ended. Grady Service watched the developments from a distance and made up his mind that he too was finished with the “game.” He graduated that year, got his degree, volunteered for the Marine Corps, trained at Parris Island and was shipped to Vietnam, where the violence was not in the interests of a mindless game.

Days of Winter by Cynthia Freeman
The Night People by Edward D. Hoch
A Previous Engagement by Stephanie Haddad
Brilliant Devices by Adina, Shelley
Sunday Roasts by Betty Rosbottom
Family Matters: Season 2 Book 3 (Killing the Dead 9) by 3,Richard Murray Season 2 Book
Crumbs by Miha Mazzini
The Mapkeeper and the Rise of the Wardens by Katie Cash
The Land of Decoration by Grace McCleen
The Right Moves - The Game Book 3 by Hart, Emma