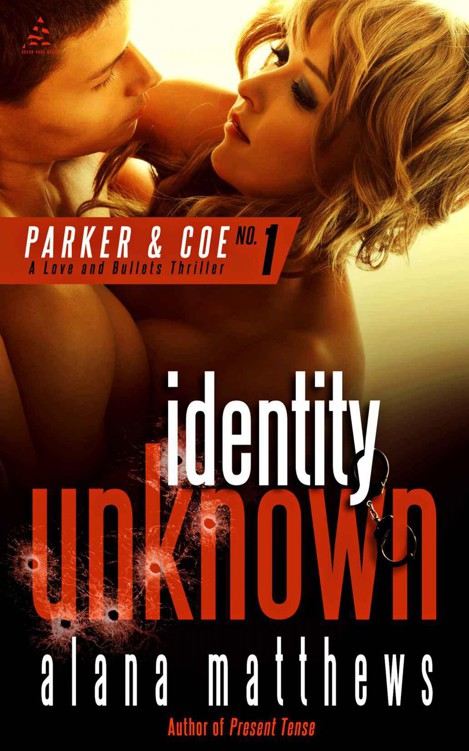 A Love and Bullets Thriller

No part of this book may be used or reproduced in any manner whatsoever without written permission except in the case of brief quotations embodied in critical articles or reviews.

Every once in a while, if you're lucky, you'll find a book so entertaining, you can't put it down until you finish it.

Identity Unknown
is that kind of book.

Alana Matthews—where have you been?

Not since I read Janet Evanovich's first Stephanie Plum novel have I chuckled so much and been so captivated by a heroine and hero.

Kelsey Coe is a hoot. She's smart, funny, self aware, and while she may not handle herself like a pro when the bullets start flying, or when Zach Parker cuffs her to his bed, she does a darn fine job of keeping it all together and herself alive in the process.

And did I mention Parker? What a man. What a mighty, mighty fine man :o)

I can't recommend this book highly enough. And I can't wait for the next
Parker & Coe
thriller. I have a feeling we'll find Kelsey and Zach chasing love and trouble again—and I want to be in the front row with my popcorn when the action starts!

The last thing I expected was to get shot at on a city bus.

I like to think of myself as an unassuming girl, one who asks little of the world and is quite content to earn her keep. I do my job, go to school, often smile when I feel like screaming, and generally don't raise too much of a fuss when things aren't going my way.

But dodging bullets was never part of the bargain. Dodging bullets is supposed to be for cops or soldiers or spies or super heroes, not for 24-year-old, fun-loving grad students from Hunter City, Texas.

Of course, dodging bullets was only the start of it all.

I also met Parker that night.

And things quickly went downhill after that.

It was a Tuesday and Tuesday meant Zumba.

Unfortunately, my boss was late with the revisions on the Sandler appeal, and since I was the lowly office temp,
I
was the one who had to stick around until the copies had been corrected and prepped for court. Which took all night.

So Zumba was definitely out. But that was fine by me, because I'd loaned my Civic to my BFF Emily, and was stuck using public transpo for the next few days. Getting to the campus gym would have required two transfers and a four block walk, and to be honest, I hadn't been too thrilled about going in the first place.

I'd met Emily in that class just two and a half months earlier, and knew immediately that we'd been separated at birth. We were both natural blondes, had both been through recent break-ups, both loved gorging on smoked gouda and Triscuits, and both held the opinion that snarky jocks driving overpriced sports cars were to be avoided at all cost.

So when Emily's father died and she needed to get to Houston, I didn't hesitate to loan her my car. She was like a sister to me now. The sister I'd never had.

I'd only been in the Great State of Texas for about six months, and had been temping at the Law Offices of Mercer, Klein, Anderson and Bremen for less than two, filling in for a part-time file clerk who had left to have a baby.

So, naturally, all the drudge work came straight to me.

I didn't mind staying late, but with Emily gone, I had no one to call to break the bad news to and that made me feel a little inadequate. Not that I needed some testosterone driven college boy to complete me, but after my breakup with Josh—(or his breakup with me, to be precise)—I was feeling lonely and unappreciated.

I carried that loneliness with me at the end of the night as I gathered up my things, locked the office and headed two blocks north to the nearest bus stop. It was just after eleven p.m. and all I'd had to eat were stale cookies from the break room vending machine, so I was anxious to get home, get some food in me, and settle into bed for a good night's sleep.

The bus arrived on schedule, rolling up to the curb with a loud roar and a hiss, then the doors flapped open and I climbed aboard, not surprised to see it was nearly as empty as my bed at home. The only occupants were the driver—who was blocking out the world with a pair of earbuds (was that even legal?)—and a couple of teenagers planted on the rear seat. Their tongues were so far down each other's throat that a stopped-up nose would surely lead to severe oxygen deprivation.

I watched them with a slight twinge of envy as I made my way to the middle of the bus and sat down, sliding over to the window. There was something beautiful about Hunter City at night, and the thought of watching the lights go by as the rumble of the engine filled my ears was a comforting one. But just as the doors were about to close, someone shouted and a figure stepped into the door well.

My heart kicked up as a guy in his late twenties climbed onto the bus, dropped his coins, and headed down the aisle to find a seat.

The guy—if you could call him just a guy—was broad-shouldered, with narrow swimmer's hips, nicely cut jeans and pair of hands that served as proof that he wasn't a man of leisure. His skin was textured and tanned and well lived in, his short but stylishly unkempt hair framed a face that was David Beckham handsome, and he was tall enough that his head nearly touched the ceiling as he worked his way toward a seat.

I'm not the kind of girl who usually embarrasses herself by openly drooling, but after weeks of self-induced carnal deprivation (save the occasional solo adventure), it took every bit of my waning willpower to keep my chin dry.

He glanced at me as he approached, transmitting an electric charge that rocketed straight through my central nervous system, and if he'd asked me right then and there to engage in the kind of activity that was currently in progress at the back of the bus—well, I'm not entirely sure I would've said no.

He was
that
good-looking.

But a glance was all it was, showing me the bluest of blue eyes I'd ever seen. Then a moment later he turned and sat, putting his back to me as if I were about as significant as the ad for pest control posted above his seat.

Just for the record, I don't consider myself an unattractive girl. Oh, I have my bad days when I look in the mirror and think my nose could be a little shorter and I could stand to lose a few pounds. I might even consider getting a boob lift now and then, but at the end of the day, I think I look pretty damn good. And to say I didn't feel a bit slighted by this guy's disinterest would be a flat out lie.

But there it was, and there
I
was, getting all riled up over something that was never going to happen. His obvious disinterest aside, I allowed myself to fantasize a bit, thinking of beaches and bare chests and six-pack abs and sinewy hands that knew just what to do and where to do it.

I was working those images pretty good, thinking I might forego dinner and get reacquainted with my Hitachi Magic Wand tonight, when the guy suddenly turned and looked at me again, his gaze hard and uncompromising.

"Don't get too comfortable, Duncan. We're getting off at the next stop."

I blinked at him.

Was he talking to
me
?

I didn't know anyone named Duncan, so I turned my head to check behind me. But all I saw were the two teenagers still going at it as if nobody else in the world existed.

I was about to throw an "I beg your pardon?" at the guy, when I heard a loud roar just outside my window, and a big black SUV rolled up alongside us.

This, in itself, was nothing out of the ordinary, but what happened next certainly was.

The rear passenger window of the SUV slid downward, revealing a man with very cold eyes who pointed the muzzle of an enormous black gun in my direction.

Someone shouted, "Get down!"—

—then the muzzle flashed and hands grabbed hold of my jacket, yanking me toward the floor, the contents of my shoulder bag spilling everywhere as the window next to me shattered into a million and one pieces.

And in that moment, the world as I knew it changed forever.

That enormous black gun had to be an automatic weapon of some kind, because it was spitting bullets in rapid succession, wreaking havoc on the seats, the walls and the rest of the windows.

A hard body covered me and pressed me against the floor, as the onslaught continued for what seemed an eternity.

It was a miracle neither one of us was hit.

Then I heard a cry of pain and the bus swerved and my guardian angel and I slid across the aisle, slamming into the metal legs of one of the seats.

The bus veered sharply right and crashed into something solid, the impact knocking us in the opposite direction. I hit the back of my head, a hollow
thunking
sound reverberating through my brain as the bus groaned like a wounded beast and came to an abrupt, unscheduled stop.

The gunfire had stopped, too.

"Stay down," the guy on top of me said, his voice sounding as if it came from the other side of a long tunnel. "Don't move."

He pushed himself to his feet, reached under his leather jacket and produced a gun. At least I
thought
it was gun. The way my head was spinning, I couldn't be sure.

What the hell was going on here?

I squinted at him, watching as he crossed to one of the broken windows and opened fire. By the time he got off the third or fourth round, I heard squealing tires fade into the distance as the smell of burning rubber filled the air.

After a moment of merciful silence, my savior went to check on the bus driver, who was nursing a wounded hand and was already on the radio to his dispatcher. "Hunter City One, this is Unit Three-fourteen. Emergency. Emergency. We've got a situation about two blocks west of stop six-two. Bastards shot me. Repeat—I'm hit."

My savior tucked his gun away and called out to the kids in back to see if they were okay. They answered shakily that indeed they were, but one of them was crying.

I couldn't be sure which.

Then he came back to me, lifting me to my feet. And, believe me, this wasn't an easy task, because I was still riding a Tilt-a-Whirl and my knees buckled a couple times.

He steadied me and said, "Are you okay? You hurt?"

Small Town Girl by LaVyrle Spencer
Raiding With Morgan by Jim R. Woolard
Tiffany Street by Jerome Weidman
Catboy by Eric Walters
Believe by Lauren Dane
A Year in the Life of Downton Abbey: Seasonal Celebrations, Traditions, and Recipes by Jessica Fellowes
A Wedding Worth Waiting For by Katie Meyer
Fallen Angel by Kevin Lewis
Tears of the Moon by Nora Roberts
The Cold Six Thousand by James Ellroy