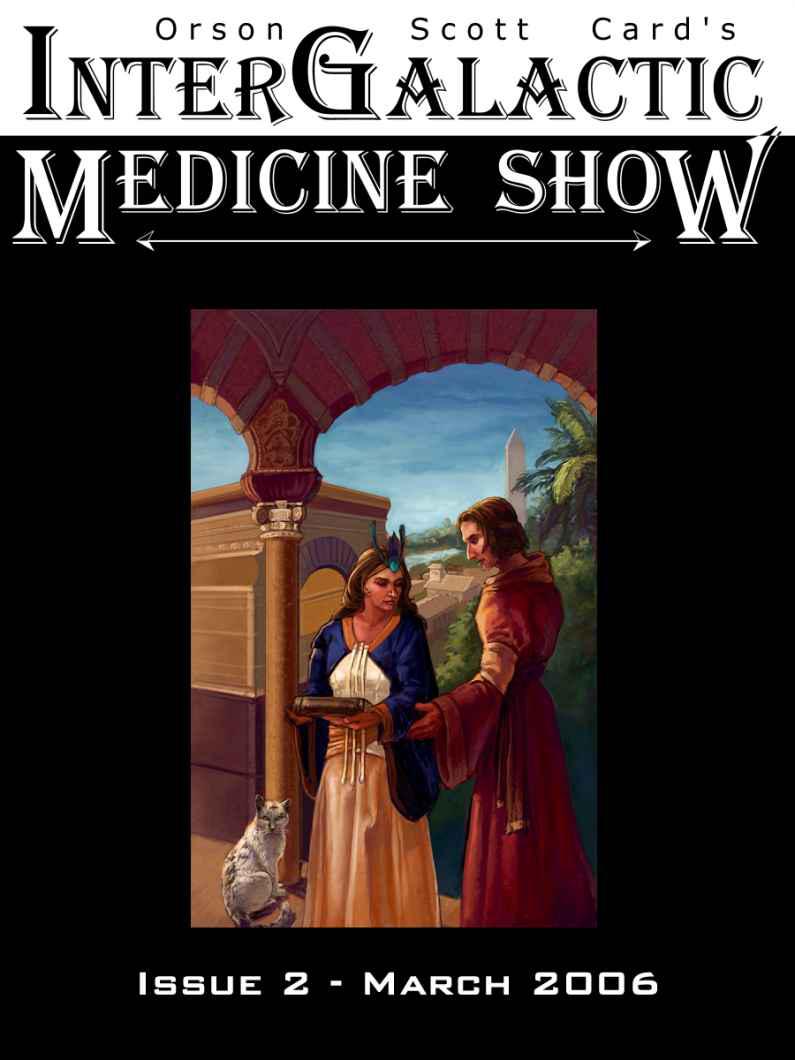 I Am the Queen 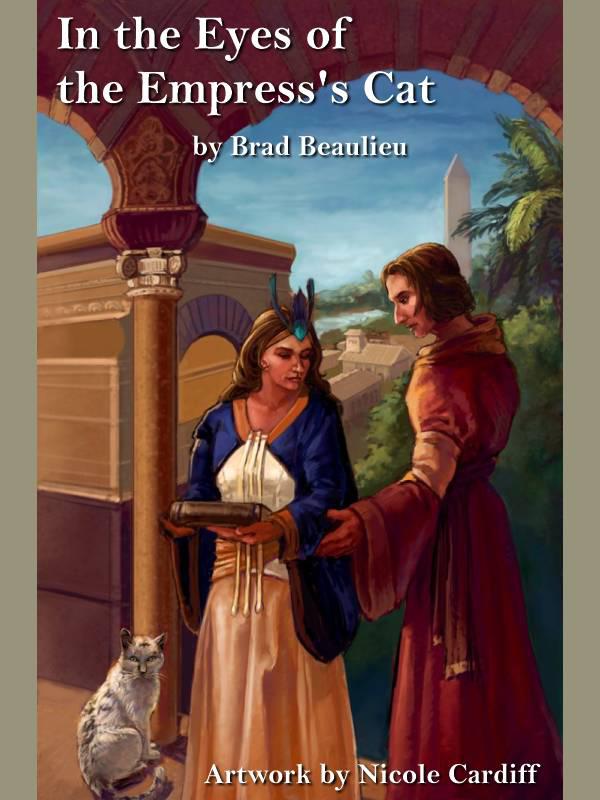 In the Eyes of the Empress's Cat

Al-Ashmar sat cross-legged in the tent of Gadn ak Hulavar and placed his patient, a spotted cat, onto a velvet pillow. Gadn lounged on the far side of the spacious tent, puffing on his hookah and waiting for the diagnosis of his grossly thin cat.

Al-Ashmar held his fingers near the cat's nose. She sniffed his hand and raked her whiskers over his knuckles. When the cat raised her head and stared into his eyes, Al-Ashmar found a brown, triangle-shaped splotch in the right eye, along the left side of the green-and-gold iris. The location of the mark indicated the cat's liver, but in this case it was the strong color that was most disturbing.

"What have you been feeding her?" Al-Ashmar asked as he stroked the cat, noting its muscle tone.

Al-Ashmar smiled, if only to hide his annoyance. The wealthy always wanted cats of status, but when it came time to care for them, they hadn't an idea worth its weight in sand.

"Not this one," Al-Ashmar said as he picked up the cat and stood, absently continuing to stroke its ears. "Please, go to the bazaar; buy a large cage and some swallows. Once a day, put her in the cage with one bird. The activity should interest her enough to induce appetite. Do this for a week and her normal eating pattern should return. If it doesn't, send me word."

A bald servant boy rushed into the room and bowed deeply. "Master, if you please, there is a messenger."

"Then bring the messenger here, Mousaf." Gadn handed Al-Ashmar three coins and then embraced him, kissing one cheek, then the other.

But the servant boy remained. "Begging your mercy, master, but they are asking for Al-Ashmar ak Kulhadn."

Gadn shoved the boy aside and rushed from the tent. "Why didn't you say so?"

Al-Ashmar was right behind him. Moments later, they reached the edge of the caravan grounds, near the pens holding dozens of Gadn's camels and donkeys and goats. A balding man with a reed-thin beard - the current rage in the Empress's courts - and wearing blue silk finery stood just outside the caravan grounds, on the sandy road leading back toward the city proper. Behind him stood four palace guards.

The first thought through Al-Ashmar's mind was the sort of beating Gadn's servant would get for referring to Djazir ak Benkada as a
messenger
.

The second was what sort of emergency would require the Empress's own spiritual guide and physician to personally come asking for
him
, a simple physic. At the least it would be to attend to a courtier's cat - after all, he'd been to the palace a handful of times for just such a purpose - but since Djazir had come personally, he could only assume it was for Bela, the Empress's cat.

Gadn ak Hulavar, as the caravan's master, stepped forward to meet Djazir. "Please, Eminence, would you care to join us? A smoke, perhaps?"

"You will accompany me," Djazir said.

He left the confused and slightly hurt Gadn and followed the royal guards and physician toward the palace. The walk through the city streets was not long, but neither was the climb easy. Al-Ashmar didn't consider himself old, but he didn't have sharp climbs like this in him anymore - not without becoming winded, in any case. Djazir, on the other hand, a good fifteen years older than Al-Ashmar, seemed hardly winded at all.

They walked through the Grand Hallway with its long pool of water and lily pads; up four sets of stairs to reach the Empress's personal wing; through a small garden of palm trees and beds of sand sculptures; and finally reached the waiting chamber of the Empress herself.

Even though it had been nearly ten years since he'd had the honor of visiting the Empress's wing, Al-Ashmar was surprised to find so many memories in conflict with reality. The room was as opulent as he remembered, but almost completely stripped of furniture - the only furnishings were the throne itself and a marble table crouched next to it, the only entertainment the three books stacked on top of the table.

Djazir turned to Al-Ashmar and spoke softly. "Understand, ak Kulhadn, you are here to examine the Empress's cat, that is all. You will do your business and you will leave. Is that understood?"

"If the Empress decides to speak to you, it will be through her handmaid. But it is taxing on her, and you will formulate brief answers, answers that will not invite further comment."

Djazir studied Al-Ashmar's eyes, and finally, apparently satisfied, turned to the guard nearest the rear door of the room and nodded. The guard rang a small brass cymbal. Minutes passed, and Al-Ashmar began to wonder if the cymbal had been heard, but then the door opened, and two huge eunuchs walked in carrying a palanquin between them. The Empress sat inside the covered palanquin, but her form was obscured by the green veils hanging down from the palanquin's roof. The only thing Al-Ashmar could discern was the golden headdress resting over her brown hair.

They set the palanquin down near the padded throne and, after pulling the fabric away on the far side, cradled the Empress from inside and set her gently on the throne. The pair of eunuchs - for only eunuch guards were allowed this close to the Empress - then moved to stand behind her, one on each side.

The Empress's eyes drooped, the left lower than the right; she sat tilted to one side, her head arching back the other way; her thin arms rested ineffectually in her lap. She had a face Al-Ashmar barely recognized - another memory that appeared to have faded to the point of uselessness. But then again, the last time he'd seen her had been years before the malady that had left her in such a state.

Al-Ashmar suddenly realized that someone else had entered the room. A woman - young, but no child, she. She moved with a subtle grace, hips swaying as she did so, but she stared at no one until she reached the Empress's side. Thus positioned, she turned and regarded Al-Ashmar with impassive, kohl-rimmed eyes. How stunning those green eyes were. How beautiful.

Much of Al-Ashmar's mind wanted to compare her to another beauty in his life - dear Nara, his wife who'd passed years ago - but those memories were still tender, and so he left the comparisons where they were. Buried.

With no one performing introductions, Al-Ashmar took one knee to the Empress and woman both. "I am Al-Ashmar ak Kulhadn, humble physic."

"The Empress knows who you are," the woman said.

Movement pulled Al-Ashmar's attention away from the Empress. From inside the safety of the palanquin leapt a cat, Bela, the bright one, ninth and final companionto the Empress Waharra before she alights for the heavens. Like the cat Al-Ashmar had just treated, Bela was long and lean, but she had the muscle tone of a cat treated well. Her smooth coat was ivory with onyx spots coating her sides and back. Stripes slid down her face, giving her an innocent but regal look. She roamed the room and croaked out a meow as if she had just woken from a long nap. She seemed wary of Al-Ashmar and Djazir, but then she slunk to the foot of the throne, curled up in a ball, and began licking one outstretched leg.

Djazir moved to the palanquin and retrieved a crimson pillow dusted with short, white hair. He set the pillow down several paces away from the throne and then set Bela upon it.

"Please," Djazir said to Al-Ashmar, motioning to Bela, "tell us what you can."

Al-Ashmar hesitated - how rude not to introduce him to the woman! - but there was nothing for it. He couldn't afford to insult Djazir.