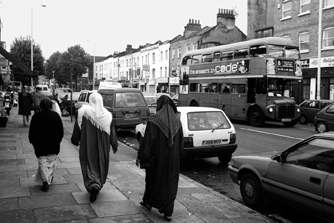 The passage speaks poetically of the end of something. Yet it is the glory of London that it is always ending and beginning anew, and that a visitor, with a good
eye and indefatigable feet, will find in her travels all the Londons she has ever met in the pages of books, one atop the other, like the strata of the Earth. On the South Bank of the Thames, where the pilgrims of
The Canterbury Tales
began their journey, there now stands silhouetted against the often lowering clouds the newest London landmark, the London Eye, the world's tallestâand certainly most technologically sophisticatedâFerris wheel. It was derided as a bit of a gimmick when it was first proposed, and the plan was to take it down after a few years. But it has become an icon of the cityâanother icon of a city that perhaps has more iconographic places, buildings, and locations than any other.

Atop it, in one of the glass cars in which tourists ride, it is possible to see most of London. The London that was rebuilt after the enemy bombs wrecked it. The London that was rebuilt after plague and fire ripped through. The London of Holmes and Watson and Nancy and Fagin, of bright young things and enemy bombs. London upon London upon London, a city in which the destruction of the Blitz managed to unearth a section of the original Roman walls nearly two millennia after their construction. No novelist would use such a metaphor; reality is often more heavy-handed than we can afford to be.

It is a grand panorama, the view from this great engineering marvel, this new colossus. But it is no better
than the view of the city from St. Paul's enormous gold dome, an icon that has stood the test of an additional three centuries of time. The only difference is that to get to the dome you must take the steps. We are accustomed now to being carried.

Both are marvelous, but neither constitutes my most beloved place in this best beloved of cities. For that you must come down to Earth and wander aimlessly. Maybe just off Sloane Square, or in Cheval Place, or on Burnsall Street, or Elgin Crescent. Maybe in Notting Hill or South Kensington or Bloomsbury. Finally you will reach it: a house with a bay window or a fanlight over a door, a house with a handsome gate or a small garden.

Around it, a street or two away, swirls the clamor of one of the busiest cities on Earth. Inside isâwhat? Did a debutante once wait there for her car? Did a maid slip out to meet her lover? Did street peddlers sell ribbons here, or fruit and flowers? Does it stand on the ruins of an older house, or a cow pasture, or even a Roman fort? Did the bombs shake its foundation and the modern real estate boom triple its value?

Behind every door in London there are stories, behind every one ghosts. The greatest writers in the history of the written word have given them substance, given them life.

And so we readers walk, and dream, and imagine, in the city where imagination found its great home.

B
y the time I had finished
Imagined London,
I had built a large castle around me. It was constructed completely of books. Whenever I left my desk, I would have to find my way through a passage I'd engineered between travel guides and literary criticism. In the process I broke the binding on a perfectly good Fodor's, ruined two paperback editions of Dickens I left out in the rain, and dog-eared and underlined some of the greatest classics ever written.

I also had the time of my life, some of it spent in a small hotel in Mayfair sharing a suiteâand several endless televised cricket matchesâwith Quindlen Krovatin, the writer and reader who is also my son.

First and foremost I must thank him for all the work he did on this book, and for the pleasure of his company. I couldn't have been habitually lost in London with anyone more interesting.

I acquired Peter Ackroyd's remarkable history of London only after I had begun work on this book. I ripped through it in two days, despite its massive size, because it is so intelligent and entertaining. It is probably impossible to write about London without owning a copy.

I could not imagine living life without the writers mentioned in these pages. In a world that seems increasingly senseless and graceless, they bring intelligence to bear on the human condition.