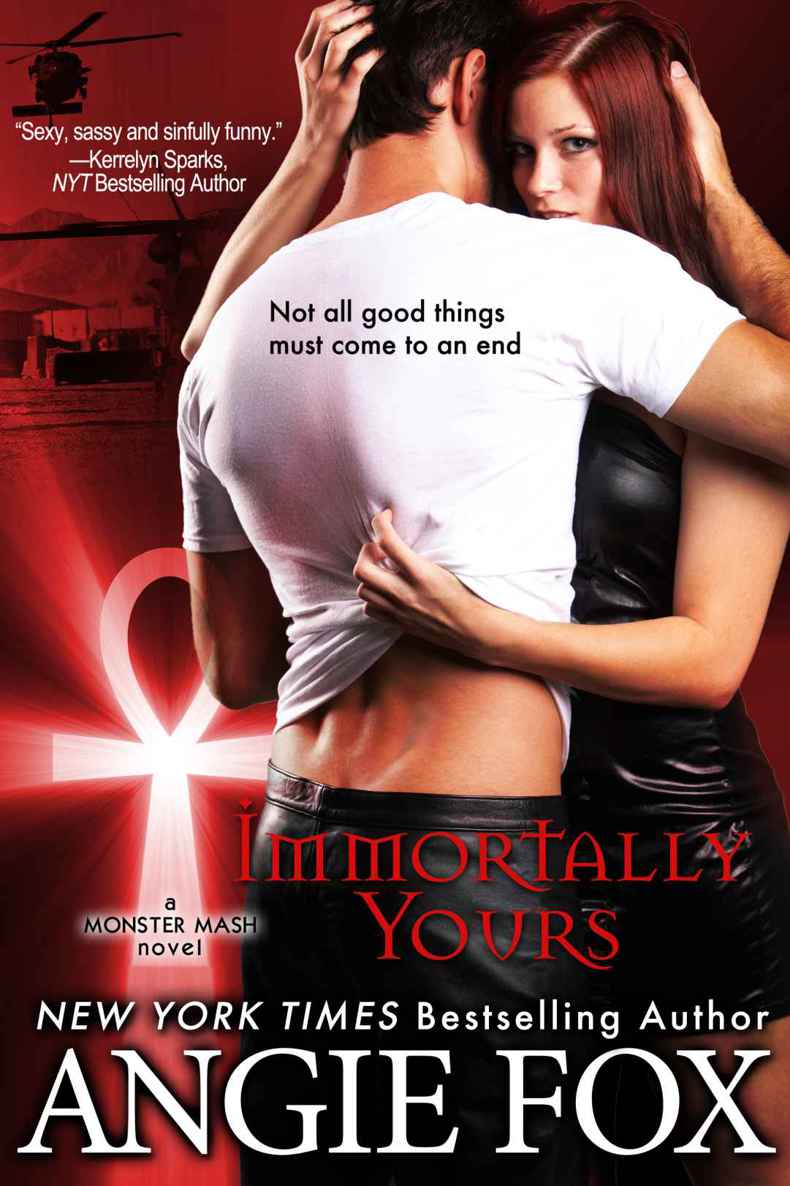 Attention all surgical personnel. Attention. Incoming wounded arriving on chopper pad two. Come and get yours while they're fresh.

Also, tonight's movie is the documentary
Clash of the Titans.

And will whoever released a kraken in the officers' showers please report to Colonel Kosta's office on the double.

I couldn't help but grin. Little did they know a few of the girls and I had relocated the kraken to the men's john. It hadn't been easy. But it'd be worth it.

Back to work. I adjusted my plastic surgical goggles and took at look at the immense demi-god on my operating table. "Stick with me and you'll be out of here in time to see that movie."

The soldier tried to smile. "Gotcha, Doc." He still wore his rusty red combat boots and the remains of his army fatigues around his ankles. Ripped abs, built chest, powerhouse arms—he definitely had the body of a minor god.

And X-ray vision, given the way he was ogling my chest. "Eyes up here, soldier. I have a tray of scalpels and I'm not afraid to use them."

A tech rushed behind me with half a dozen fresh units of blood. "Coming through!"

We'd squeezed two extra tables into the operating tent last week and I wasn't sure if it was hurting or helping. One thing was certain—the noise level had gone from a large racket to a small riot.

My nurse tucked a surgical blanket over my patient's lower body while I took a look at a nasty slice on his side.

"Yeti claw to the torso," I said, as if it weren't obvious from the swarthy black spike jutting from between his thirteenth and fourteenth ribs (and yes, the minor gods had extra—their ancestors didn't give anything up in the Garden of Eden).

"And I lost something," my patient said, dropping his chin. His tousled golden hair parted to reveal a pair of thick devil horns. Make that one devil horn. The other had popped off, the wound completely healed. It was one of the things about divine warriors that drove me slightly crazy. They healed so fast, their bodies sometimes forgot parts. I swear some of these guys would lose their heads if they weren't attached.

"Do you know where you left your horn?" I asked, testing the wound beneath my gloved fingers and fighting the urge to lecture him about absent body parts.

The side of his mouth tipped up, and there was no mistaking the gleam in his eyes. "I think I had it when I got here."

I remembered him. This was the one who had us searching half the camp for his missing eyeball. He thought it'd be funny to put it in someone's soup. Har-de-har-har. Served him right when a selkie ate it.

Of course, three days later he got it back.

Everybody was a comedian. And people like me had to deal with it.

"Horace," I called across the crowded operating room to the nearest orderly.

Horace zipped to my side and hovered just above eye level. Golden wings fluttered on his heels and at his shoulders. "Yes, Petra."

I ticked my chin up a notch. "That's Dr. Robichaud," I reminded him. Again.

"No." The attendant's eyebrows spiked toward his overly large surgical mask. "I do not speak Cajun."

"Well, learn." It wasn't my fault if some of the old-world creatures had a chip on their shoulder against mortals.

Just because we hadn't hung around for thousands of years, guzzling wine and smiting our enemies, didn't make us second-class citizens. And if they wanted us to go back to worshipping them, they could forget it.

Times had changed, and if I had to learn to live in this place, Horace could figure out how to play nice with a half-human. "See if you can't find a horn floating around here. About two inches wide, three inches long. Red."

"Actually"—the demi-god on the table leaned his head forward—"it's more of a garnet."

Like anyone around here would know the difference. "Red," I repeated. "With a little curve on it."

Horace raced off, and I leveled a stern look at my patient. "I'd better not find it in my Spam carbonara or I'm going to reattach it to a place that doesn't see the suns."

Although frankly I didn't think anything could make that night's dinner worse.

A cold hand touched my arm, and dread slithered down my spine.

Not him. Now now.

I braced myself as the watery voice seeped over me. The air temperature dropped, and I saw my patient shiver.

I took a deep breath and glanced to my right. It was Charlie, the nurse I worked with for the first six years I'd lived in this hellhole. He was killed last year before HQ had wised up and moved us another half mile from the front.

Charlie looked like a teenager, too skinny for his rusty red army scrubs. His mousy brown hair was scraggly at the ends, and he wore an earnest expression.

He didn't know he was dead. And I sure as heck didn't need anyone seeing me talk to thin air. "Go, Charlie," I murmured. "I've got this."

My patient's eyes clouded with confusion. "My name's not Charlie."

"Of course it's not," I said, as if this were a normal conversation.

The soldier flinched as Charlie took his vitals. He couldn't see my former assistant's ghostly stethoscope or sure hands, but I'd bet anything he felt the chill.

My heart squeezed with regret. Charlie had a mom and a dad. He'd been so very young. He never should have been down here. I'd tried to explain to him that he was dead, but he hadn't been willing to accept it. We'd try again later. Alone.

Charlie's milky eyes caught mine. "Dr. Robichaud?" I knew that sad, hopeful look. The kid needed a little reassurance, a comfortable word—hell, even a joke. Charlie had been assigned to me straight out of nursing school. I'd laughed and called him my young squire. He was my responsibility.

I looked straight through him. It cut me deep to do it, but I couldn't risk being exposed. Not here. My power to see the dead, to talk to them, was outlawed by the gods. And the gods had a thing for strange and horrific punishments. It was like a divine version of
The Godfather.

Only these sicko bosses turned women into spiders, fastened "friends" to burning wheels for eternity. Oh, and tied one of their own to some far-flung rock so he could have his liver pecked out by an eagle until the end of time.

My patient studied me. "You with me, Doc?"

The tightness in my chest eased as Charlie faded away.

The demi-god cocked his head, blond hair spilling over the spot where his horn should have been. "Your face looks funny. And I've been staring at your breasts for the last two minutes and my balls are still intact. What gives?"

I reached for the Betadine, breathing in the familiar sweet scent. "That's it," I said, swabbing his chest with the amber liquid, careful of the yeti claw. "I'm going to quit surgery and dedicate my life to discovering an anesthetic that works on you people."

"You know you can't quit," he said, teasing, but hitting way too close to the truth.

I was stuck here for the rest of my life. I knew it the day I'd sat in my little paranormal clinic in New Orleans and opened the New Order Army draft notice.

Involuntary conscription until the end of the war.

Which for me was a life sentence.

The younger gods had declared war against the older gods. Again. Neither side had so much as called for a cease-fire in the last seven hundred years.

Both armies were allowed to recruit anywhere on Earth. And I use the term
recruit
lightly. It was more like a shanghaiing. A rep from the young gods spotted me first. Army officials had given me one hour to close my practice and say my good-byes. There would be no home leave, no return.

My dad couldn't even see me off as they led me out into the depths of the bayou to a portal that hung like a misty cloud amid a tangle of cypress trees. Before I could say
Bad idea,
I was in the red, flat wastelands of limbo.

I snuck a glance across the crowded operating room, with a dozen tables like mine.

We worked to save as many lives as we could. And to get the soldiers back onto the battlefield. If the armies of the gods were evenly matched, they'd kill each other, which was bad enough. If one side got the upper hand, it meant earthquakes, tsunamis, disasters of biblical proportions on Earth.

I'd seen it firsthand.

So I'd stay here. I'd patch up our people and get them back to the Limbo Front. We'd keep the terror on Earth at bay and maybe, just maybe someday there'd be an end to the fighting.

Until then, we had to hang on.

I reached down to make sure the claw hadn't worked its way too far out of my patient's chest. Immortals could die. That was the big secret they liked to keep from the mortal world. The yeti claw had missed his vital organs. It wouldn't kill him, but I didn't want it healing wrong. I tested the edge, careful not to cut myself.

Yeti infection was bad for immortals. It could be deadly for me.

"You know I got into medicine to make a difference," I caught myself mumbling.

I wanted to help people who didn't voluntarily mix up their vital parts. Creatures with real problems who couldn't go to human hospitals. I'd been one of the last paranormal surgeons in Orleans Parish. And the only one who specialized in thoracic medicine.

I glanced at Nurse Hume, who was swathed in scrubs and a surgical mask. He looked like a child next to these immortals. We all did.

"Brace yourself," I told my patient.

I clamped the skin back. Blood smeared my surgical gloves as I manually retracted the spikes from the surrounding muscle tissue. "I'm going to remove it on the count of three." I flicked my eyes up and found him watching me. "One." My fingers tightened. "Two…"

In one quick motion I made the extraction.

Welcome to Paradise by Carol Grace
Hired: Nanny Bride by Cara Colter
The Business of Pleasure by Elyot, Justine
Ghost of Christmas Past by King, Rebecca
A Match Made in Heaven by Colleen Coble
Lion Heart by A. C. Gaughen
Magical Acts: (Skeleton Key) by Michele Bardsley, Skeleton Key
Revenge for Hire (The Get Even Agency) by Lynn, Janice
Love Prevails: A Zombie Nightmare by Dane Hatchell
The Final Nightmare by Rodman Philbrick