After a lifetime of moving and change, Jan Carroll wants nothing more than to settle down and build a home. Then her father gets sick, and the stable—if solitary—life she’s made as a high school geometry teacher in Spokane, Washington, threatens to crumble around her. She wants little to do with newcomer Tina Nelson, a shallow and unreliable playgirl. Especially since their mutual friend Brooke Stanton has been not-so-subtly matchmaking…

Tina, a graphic artist and musician, has vowed to spend her life free from the obligations that characterized her youth. No ties, no long-term commitments. But she agrees to travel to Spokane to help her cousin promote his business and, in a second moment of weakness, promises to contact Jan. Tina is certain her acquaintance with the too-logical and inflexible woman will be a short one.

Sometimes, though, love makes you throw away life’s careful script. Can these women learn to improvise? 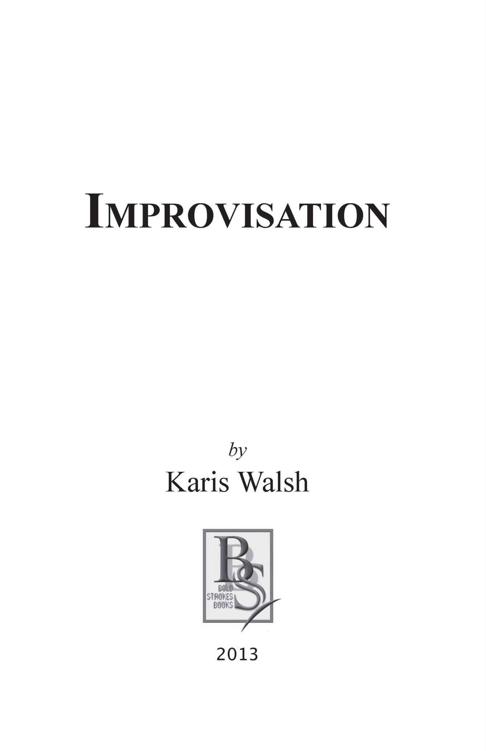 Revisiting the world I created in
Harmony
and reconnecting with some favorite characters has been a wonderful experience. I’ve come out of the process filled with gratitude for every reader who has taken a chance and bought one of my books. For every person who has contacted me through e-mail or Facebook or my blogs. For every romance fan I’ve had the privilege of meeting in person at a book signing or other event.

Whether you’ve read all my novels or are just joining me now, with
Improvisation
, this book is for you. Thank you for taking the time to travel with me through the world of my imagination. Enjoy!

With all my love and all my heart

Tina Nelson’s fingers played a cascading waterfall of notes, echoed moments later by Andrea Taylor’s viola, while her mind raced several measures ahead. She was sure Andy had practiced diligently before this session, but Tina hadn’t even glanced at the music since the last time they had played it together, over six months ago. The rehearsal was a casual one between two friends as they worked the kinks out of a duet they’d played before, but Andy had obviously prepared for it. When Tina had arrived at Andy’s—fifteen minutes late, after frantically searching for the right piece among the numerous piles of sheet music scattered throughout her apartment—Andy had already set up two chairs and had written out an agenda for the session. Luckily, Tina enjoyed the rush of being a few steps behind and fighting to catch up. She noticed some tricky string changes coming, and she shifted her hand up the violin’s neck into fifth position to handle the difficult passage more easily.

“Stop doing that,” Andy said, continuing to play without missing a beat when Tina morphed the Mozart into an old fiddle tune.

Tina sighed and returned to the music in front of her. Mozart’s second string duo was one of her favorites—fiery and demanding and passionate. Perfectly suited to her and Andy’s style of playing. But, today, the stems on the notes resembled prison bars, and she felt too restless to stay within their confines. She tried to behave for half a page before a series of notes led her back to the familiar fiddle song.

This time, she managed to pull Andy along with her for a few bars. “Incorrigible,” Andy said as she stopped playing and balanced her bow on her lap.

“Irresistible,” Tina offered instead. She considered it a personal triumph every time she was able to tempt Andy off the transcribed path of perfection.

Andy penciled in a note on her music. “Now, every time I play this section, I’ll want to switch songs,” she said, a small smile belying her cranky tone. She took out a yellow highlighter and emphatically colored her notation.

“What did you write?” Tina asked, leaning over to peek at Andy’s music. Notes filled the margins, color-coded for her convenience. “Do not have fun?”

Brooke Stanton tapped on the door of Andy’s music room, the spare bedroom in their apartment. “Are you taking a break?”

“Just long enough to get Tina back in line,” Andy said.

“Could be hours,” Tina added, watching her friend’s small grin turn into a bright smile as Brooke walked into the room. She swiped two of Andy’s colored pens while her attention was diverted. Tina had slept with plenty of women she met at the weddings where she played with Andy and the two other members of their string quartet, but those relationships rarely lasted beyond the next weekend’s gig. Andy had only slept with one—for once straying from her orderly behavior and dramatically choosing the bride instead of a bridesmaid—but the relationship had lasted almost two years so far. Everyone who knew Andy and Brooke expected those two years to stretch into forever.

“Was that Mozart?” Brooke asked, stepping farther into the room and resting her hands on Andy’s shoulders.

“It was ‘Little Brown Jug,’” Andy said. “But it was
supposed
to be Mozart.”

“Poor sweetheart, is Tina driving you crazy?” Brooke winked at Tina before leaning down to kiss Andy on the cheek. Tina winked back. She and Brooke were often coconspirators in their attempts to bring out Andy’s more playful side. Tina watched Andy turn her face to meet Brooke’s kiss. It was simple and quick, but the love behind it was difficult to miss. Tina smiled, glad to see her friend’s happiness. Brooke was the kind of woman who might even have made Tina give up her routine seduction of bridesmaids. Thank God, Andy had found her first.

“I’ll let the two of you get back to work,” Brooke said as she straightened up. “Andy, I bought a can of tomatoes when we were at that Italian grocery downtown, but I can’t seem to find it.”

“Second shelf, behind the soup,” Andy said as she shuffled through her music.

“That’s just how I put them away,” Andy said, sounding indignant. “I don’t alphabetize my canned goods.”

“Anymore,” Brooke called from the kitchen.

Andy’s cheeks turned slightly pink, but she pretended to ignore the comment even though she couldn’t hide her smile as she clearly enjoyed Brooke’s teasing. “Let’s practice the third movement. Without any fiddle tunes this time.”

Tina’s laugh changed to a sigh. Back to work.

An hour later, Tina shoved her sheet music haphazardly into her bag. After two more unsuccessful attempts to sway Andy away from the written notes, Tina had given up and concentrated on the Mozart. Even she felt satisfied with the final play-through. She and Andy handled the challenging timing easily, coordinating the two intricate parts with a comfort developed over years of playing together.

Be Mine for Christmas by Alicia Street, Roy Street
Ruined by Amy Tintera
The Price of Power (The Price of Secrets Series Book 2) by Ashley Drake
At Home in Pleasant Valley by Marta Perry
Flesh Worn Stone by Burks, John
What Wild Moonlight by Lynne, Victoria
Midnight Sins by Lora Leigh
Ghosts of Rathburn Park by Zilpha Keatley Snyder
Forgotten Awakenings (Awakenings #2) by Lisa Bilbrey
Under the Skin by Vicki Lane