Read In a Stranger's Arms Online

In a Stranger's Arms 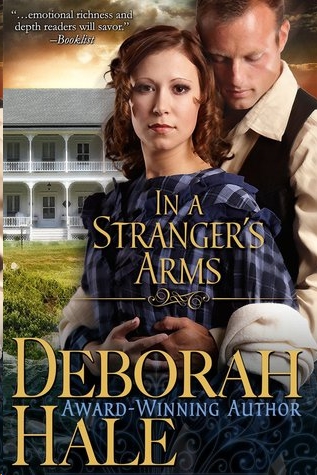 In a Stranger’s Arms

Previously published in a mass-market paperback edition as
Carpetbeggar’s Wife
by Harlequin Historical.

This is a work of fiction. Any references to historical events, real people, or real locales are used fictitiously. Other names, characters, places and incidents are the product of the author’s imagination, and any resemblance to actual events, locales or persons, living or dead, is entirely coincidental.

For Catherine Mann and K. Sue Morgan, wonderful Southern belles to whom I owe more than I can say.

And for my sister Patricia Galbraith, vibrant redhead and world’s most devoted mom.

“
T
HE HOUSE IS
still standing. That’s something, at least.” Relief pushed the words out of Caddie Marsh’s mouth. Tales she’d heard from Georgia and her native South Carolina had made her fear she’d find a gutted shell when she returned to Sabbath Hollow. Perhaps only the chimneys, listing above charred rubble.

Caddie paused at the crest of a gently sloping ridge overlooking the Marsh plantation. From where she stood, the place appeared as if war had hardly touched it. Four bold white pillars still held up a jutting triangular portico that shaded most of the spacious front porch. Arrayed in front of the house like attendants before a stately bride, flowering dogwood shimmered in the April breeze.

For the first time since Confederate troops had abandoned Richmond, Caddie allowed tears to rise in her tired eyes. After a long and bitter exile, she and her children were home at last. The shambling old mare stopped in its traces beside Caddie, shook a graying mane and blew out its breath in what sounded like a sigh.

On the driver’s seat of the precariously loaded buckboard, eight-year-old Templeton Marsh roused from his doze. He pushed a stray lock of pale brown hair off his forehead then rubbed his eyes. “Are we there yet, Mama?”

Beside him, little Varina continued to sleep as serenely as she’d slept while Union batteries thundered at Cold Harbor.

Caddie’s gaze rested on the children for a moment. A brooding warmth swelled within her bosom, both tender and fierce. Tender in her love for them. Fierce in her desire to protect them from the harshness of the world. They’d experienced too much of that already in their young lives.

“Yes, dearest, we’re home.” Caddie pointed toward the graciously proportioned mansion. “It must seem such a long time to you since we left for Richmond.” To her, it felt like several lifetimes. “Do you remember Sabbath Hollow at all?”

Tem’s brow wrinkled with an effort of concentration. “I... reckon I might.”

Clearly, he recognized it was important to his mother, and he wanted to please her.

‘‘Once we’ve been here a little while, I expect the memories will come back to you.” Caddie did her best to reassure him with her smile and gentle tone.

Tem was such a grave, sensitive boy for his years. More than anything, Caddie wanted to give him and Varina back part of their stolen childhood. And the heritage of this fine old plantation that had been in the Marsh family since colonial days.

For an instant Caddie felt herself pulled into the warm embrace of the past, seeing Sabbath Hollow as it had looked when she first laid eyes on it. Ten years ago, as Delbert Marsh’s newly wed bride. She could almost hear the laughter of guests and the mellow croon of a seasoned fiddle. Almost see the bewitching swish of silks and taffetas in a palette of colors as bright as a spring garden. Almost smell the mouthwatering pungency of oak and hickory smoke from the barbecue.

“Mama?” Templeton called Caddie back to the present.

She stirred from the sweet seduction of her memories with melancholy reluctance.

“What is it, dearest?” Caddie patted the mare’s hindquarters to urge it forward.

“Why is one of the chimneys smoking?”

At that moment, a thick cloud with a dark underbelly enveloped the bright April sun, leaching every particle of warmth from the air.

Caddie froze in her tracks until the slow-moving front wheel of the buckboard prodded her forward. “I—I don’t know.”

For an instant her heart lifted as she wondered if some of the Marshes former slaves might have come back to the only home they’d ever known. If they’d be willing to work for their bed and board, she’d be able to manage so much easier.

It was an appealing notion, but common sense told Caddie not to get her hopes up. Slaves on this northernmost fringe of the Confederacy had fled in droves when the first Union army marched south.

Forcing her feet down the muddy lane, she swallowed a lump in her throat that felt the size of a smoked ham. “I suppose we’d better find out, hadn’t we?”

The closer they drew to the house, the clearer it became that the place was occupied by someone. Not someone very prosperous or industrious, Caddie decided as her gaze took in the peeling paint, shattered windows and broken railings that hadn’t been apparent from a distance.

Would she be able to do any better? An insidious whisper of self-doubt taunted Caddie. With no money, no husband and two young children to care for, how could she expect to fix up the house and put the plantation back on the road to prosperity?

Stiffening her spine and tilting her chin defiantly, Caddie thrust those negative thoughts from her mind.

It was the way she had survived and cared for her little family against the odds after Del had been reported dead in battle, and later when the Confederacy had fallen to the Yankees. By working hard, making do, swallowing her pride again and again without ever losing it. She had never failed at anything in her life, and she wasn’t about to fail at this, either.

In the first place, she refused to give her enemies the satisfaction of having defeated her on a personal level. And in the second place, her children’s future depended on it.

Just then, a woman sauntered around the corner of the house. Her dark hair hung loose and her brightly colored dress clung tight to her ample bosom. The gaudy garment looked far newer than Caddie’s oft-mended calico, dulled by much wear and many washings.

The woman started at the sight of the horse and wagon, but quickly recovered and planted her hands on a pair of broad hips. “Git, now! We don’t give handouts.”

“Lydene?” The name retched out of Caddie, sour as vomit. Beads of sweat broke out on her forehead. With trembling hands, she pulled the bonnet off her tightly pinned hair before its ties choked her.

What the devil was Lydene Swade doing at Sabbath Hollow?

The two women stared at each other for a minute that seemed to stretch into hours. Caddie, bewildered, disgusted and furious. Lydene, embarrassed, triumphant and contemptuous. Just as they had looked at each other on that long-ago evening when Caddie had discovered Lydene, naked, underneath an equally naked Delbert Marsh. That was one memory from her past at Sabbath Hollow that Caddie had no desire to rekindle.

Breaking from their stare, Lydene hollered over her shoulder, “Lon! Git on out here. You’ll never guess who’s come from Richmond for a visit.”

With a sickening jolt, Caddie realized that she
had
failed at one thing in life, after all. One of the most important vocations of a Southern woman’s life, and she’d made a worse mess of it than General Sherman had made of Georgia.

That must be his wife.

The man known as Manning Forbes pulled his improvised fishing line out of the water. His heart beat a thundering tattoo against his chest and his stomach contracted into a lump as hard and heavy as a cannonball.

From his bivouac camp beside the creek, he watched the slender woman lead her horse and wagon onto the lane that wound its way down to the derelict plantation. The boy and redheaded little girl resting on the seat of the buckboard looked to be the right ages—the boy somewhat small for his eight years.

Manning Forbes had been waiting for them with a mixture of anticipation and dread most good Christians reserved for the Second Coming.

In the last day or two, he’d begun to wonder if they would show up at all. Some instinct had warned him to avoid the man and woman who’d made themselves at home in the pillaged mansion. So he’d posed a few discreet inquiries around the neighborhood, instead.

Where had Caddie Marsh and her children gone? Were they expected back at Sabbath Hollow anytime soon? He hadn’t received very satisfactory answers. Only puzzled, wary looks. Not surprising, perhaps.

With little choice but to wait and hope the Marsh family would come to him, Manning had occupied himself with an informal survey of the plantation. Assessing the damage done to it by the shifting tides of war. Weighing its assets and liabilities. Sizing up its potential.

He was confident he could make the place profitable again, if only he could win the cooperation of Mrs. Marsh.

Unbidden, his hand rose to pat the breast pocket of his coat. In it rested the last letter Caddie Marsh had written to her husband before the Battle of the Wilderness. Ever since the day of that terrible conflict, Manning Forbes had kept that scrap of paper on his person every waking hour.

Like the hair shirt worn by penitents of long ago, it reminded him of his transgression, and of the vow he’d sworn to atone for it. A vow to protect and provide for Caddie Marsh and her children, no matter what it cost him.

He could think of only one honorable means to fulfill that vow, though he shrank from even the thought of it. Somehow he would have to convince Widow Marsh to marry again.

But first he’d have to convince himself.

Caddie’s shaken composure rallied as she watched her brother-in-law stroll onto the verandah.

She hadn’t seen a Southern man so well dressed since the early days of the war. Lon’s flaxen hair was smoothed in place with pomade. The wisps of facial hair on his chin and above his lip looked expertly barbered. He moved with the casual grace Caddie remembered so well.

“Why, Caddie, is it really you come all the way from Richmond?” Lon glided toward her and made an elaborate bow over her hand. “You should have sent us word you were coming. I could have ridden out to meet you.”

From the first day she’d arrived at the Marsh plantation as a bride, Caddie had never felt comfortable around her husband’s overindulged younger brother. Still, he was her children’s only blood kin on the Marsh side, For Tem and Varina’s sake, Lon would soon send that bold Swade minx packing from Sabbath Hollow.

“I didn’t know you’d be here, Lon.” Even if she had, Caddie could not have spared precious cash to mail a letter. Pride wouldn’t let her admit it, though. “I wasn’t certain you were still alive.”

A Thousand Acres by Jane Smiley
Ghost War by Maloney, Mack
CRUDDY by LYNDA BARRY
Til We Meet Again by Pamela Clayfield
Under the Dragon's Tail by Maureen Jennings
Nine Years Gone by Chris Culver
The A-Word by Joy Preble
All of Me (Inside Out Series Book 6) by Jones, Lisa Renee
Slow Tango With a Prince (Royal Scandals) by Nicole Burnham
Jennifer Haigh by Condition