Read In for the Kill Online

In for the Kill 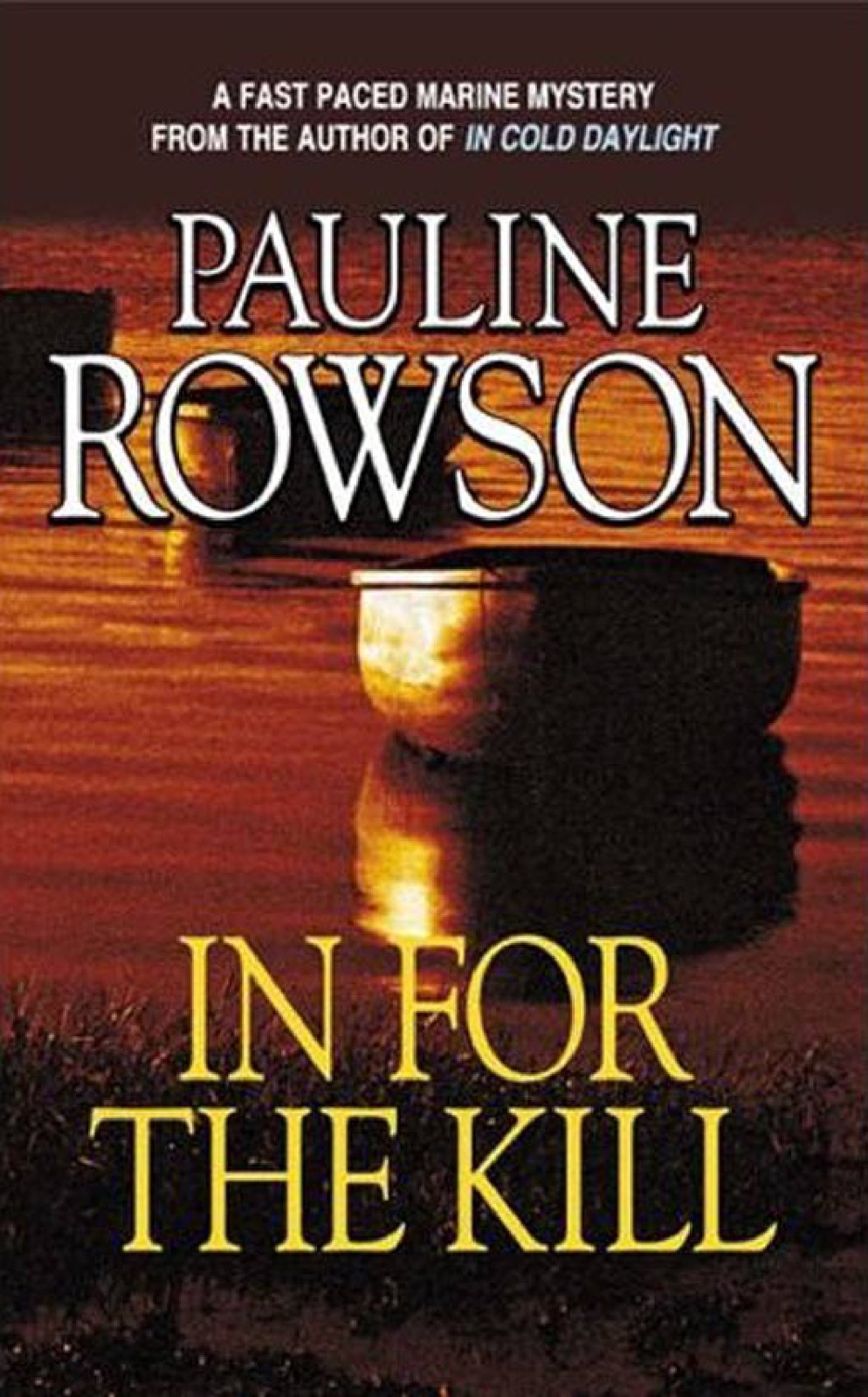 'I was hooked from the first page. Pauline Rowson's thrillers are a contemporary take on the classic page-turner. She weaves terrific plots around memorable characters, including In For The Kill's reluctant hero, Alex Albury. Her writing is as sharp as a punch in the ribs. Attention grabbing. Compulsive.' Editor Hampshire Life Magazine'Pauline Rowson's novels are packed with twists and turns. This is an enjoyable crime novel and Pauline is a crime writer to keep an eye on. Great Stuff.' Caroline Mileham, Books Buyer, Play.comI bought this book solely because of where it was set, and was a little dubious as it's not the genre I usually read. I picked it up at 10.30pm, thinking that I would start it before I went to sleep... but I couldn't put it down. I finally read the last page at 3.20am the next morning. An amazing book by a very talented author, both I highly recommend.WARNING: May cause sleep loss! Ellen Reeves www.amazon.co.uk

Pauline Rowson is author of the popular Marine Mystery crime novels: Tide of Death, Deadly Waters and The Suffocating Sea, and the thriller, In Cold Daylight. Before becoming a writer, Pauline ran her own marketing company. Born and raised in Portsmouth, England, she lives on Hayling Island, Hampshire.

IN FOR THE KILL

The right of Pauline Rowson to be identified as the author of this work has been asserted by her in accordance with the Copyright, Designs and Patents Act 1988.

All rights reserved. No part of this publication may be reproduced in any material form (including photocopying or storing it in any medium by electronic means and whether or not transiently or incidentally to some other use of publication) without the written permission of the copyright owner except in accordance with the provisions of the Copyright, Designs and Patents Act 1988 or under the terms of a licence issued by the Copyright Licensing Agency Ltd. 90 Tottenham Court Road, London, England W1P 9HE.

Applications for the copyright owner’s written permission to reproduce any part of this publication should be addressed to the publisher.

Warning: The doing of an unauthorised act in relation to a copyright work may result in both a civil claim for damages and criminal prosecution.

This novel is entirely a work of fiction. The names, characters and incidents portrayed in it are entirely the work of the author’s imagination. Any resemblance to actual persons, living or dead, events or locations is entirely coincidental.

Pauline Rowson was raised in Portsmouth and is a frequent visitor to the Isle of Wight, the setting for this marine mystery thriller. In addition to being a crime writer she is the author of several marketing, self-help and motivational books. She lives in Hampshire and can never be far from the sea for any length of time without suffering withdrawal symptoms. This is her third marine mystery and she plans many more…

Communicating With More Confidence
Being Positive and Staying Positive
Marketing

‘With the Harley Davidson riding Horton living on a yacht and the various harbours and marinas around Portsmouth playing a major part in the action this is ideal reading - just check out that yacht in the next berth.’
Sail-World.com

‘If you are looking for a gripping read, to while away the time between sailing, try murder mystery
Tide of
Death
.’
Yachts and Yachting Magazine

‘Rowson’s marine mystery series can do for the Solent what Inspector Morse did for Oxford.’
Daily Echo

‘Hoist the sails for DI Andy Horton and his sidekick Barney Cantelli. A series with a fair wind behind it and destined to go far.’
Amy Myers

‘A detective novel with a cutting edge. A great marine mystery with action.’
Marine Update
Reader Reviews for
Tide of Death

‘Marvellous! A detective story that kept me enthralled to the end.’

‘This is the first detective crime novel I have read and I thoroughly enjoyed it. Can’t wait to read the next one!’

‘Andy Horton is great. Can’t wait to find out what happens to him in the next book.’

‘Pauline Rowson has combined the glamorous yachting world on the south coast with the seedy criminal world in a fast moving, easy to read marine mystery. The reader is transported straight into the world of deception and intrigue. I could not put this book down. It is a must read.’

‘Twists and turns described this perfectly. I enjoyed it and couldn’t put it down. Can’t wait for the next one.

‘I really enjoyed this. It kept me turning the pages.’

‘This is a fast-paced and enjoyable book with many twists and turns. The characters are well defined and the plotting is excellent. For the reader who likes an atmospheric novel together with a good mystery, Rowson is one to watch.’

Mine honour is my life: both grow in one;
Take honour from me, and my life is done.

There is before and after, like one of those slimming adverts you see in magazines and newspapers. Only my before and after had nothing to do with diet, unless you counted prison food. Before prison I had been confident and successful. I had a family and a career. I had friends. And after? Well, here I am standing outside Camp Hill on the Isle of Wight getting high on the smell of diesel and petrol fumes, hesitant, with a prison pallor and a prison stoop.

For forty-two months, one week and two days I had dreamt of this moment. Now that it had arrived I felt a flutter of panic that almost had me scurrying back to the gates of Camp Hill pleading to be allowed back in. Goodness knows what lifers must feel!

I pulled myself together and headed towards the black Mercedes. Remember who you once were I said to myself. But that Alex Albury had vanished one September when, in the early hours of the morning, the police had burst into my home on the Hamble and had arrested me for something I hadn’t done.

I climbed into the waiting car and glanced at my defence lawyer. Miles gave me a brief nod before pulling out into the traffic. We didn’t speak. As the prison receded my breathing became easier. My pulse settled down and I felt the tension drain from my body. As we climbed Brading Down, the sparkling blue of the Solent in the distance stole the breath from my body.

It was then that I knew no matter what the cost I would find James Andover. I would ask him why he had framed me. And then I would destroy him as he had destroyed me.

‘To freedom and the future.’ Miles Wolverton peered at me over the rim of his glass.

Chink. I swallowed and pulled a face. I’d forgotten how dry champagne is. I stared around my immaculately clean houseboat, courtesy of Miles’s cleaning lady, Angela. It didn’t seem real.

This was a dream and at any moment I would wake up and find myself back in my cell.

‘So what now?’ Miles asked, easing himself down on the blue and white striped cushioned bench that ran either side of my narrow lounge.

He stretched out his short legs, eyeing me curiously with those green penetrating eyes that I had seen so often across the courtroom and in the prison visitors’ centre. I thought how out of place he looked in his pin-striped suit. And, to me, his broad physique, bull neck and rugged face made him much more a candidate for the building site than the law courts. I hadn’t wanted him to meet me from prison; I would have preferred to be alone, but Miles had meant well.

I guess he still felt guilty for not getting me off the charges of fraud and embezzlement.

I turned to stare out of the patio doors at a scene I had dreamt of so many times in my prison cell.

The tide was rushing out of Bembridge Harbour, carrying with it a small yacht, its sails as yet unfurled, its diesel engine chugging gently. To my right, on the curving sandy beach, a woman was throwing a ball into the sea for a liver and white spaniel.

‘Now I find the truth,’ I said, quietly.

I gazed at him disbelievingly.

‘I’ve told your probation officer and I’ve squared it with my partners.’

‘You don’t even have to come to the mainland for the partners’ meetings. I can get our marketing manager to e-mail anything that’s required and you can start by writing some press releases and articles for us.’

‘Miles, you don’t understand. How can I go back to being a PR man when my reputation has been destroyed? Andover’s still out there somewhere and I have to find him – whoever he is – otherwise how do I know that he won’t frame me again? And I need to know why he hated me enough to have me convicted for five years.’

I poured myself another glass of champagne, but didn’t drink it. I’d finally been given parole two-thirds of the way through my sentence. I’d had to tell the parole board that I was sorry I had swindled three prominent businessmen out of one million pounds each, and admitted that Andover had been my partner and had absconded with the money.

Well, now
I
was going to take some action and it wasn’t finding myself a job. I had some money from the sale of my mother’s house on her death and the houseboat was in my name. It wasn’t much, but it was enough to keep me going until I got to the truth. Or, at least, I hoped it was.

Miles shifted his squat body and scowled at me. ‘I don’t think the parole board will like it.’

‘Then we’ll just have to keep it from them,’ I replied sharply, and then almost instantly relented. It was hardly Miles’s fault. He’d done his best to keep me out of prison.

‘What if you never find Andover?’

‘I understand what you must be feeling, but –’

You haven’t lost your wife and your children, your home, your future, your reputation, your freedom. You’ve lost nothing. I’ve lost everything, even my sodding confidence.’

My words fell into a pool of silence. I stared at the photograph on the narrow shelf behind the bench seat. My sons smiled back at me, their hair ruffled by the wind, their faces tanned, red lifejackets swamping their small chests. The picture had been taken on my boat during our last holiday before my arrest. David was aged ten then, dark-haired and two years older than Philip.

God, how I missed them!

A tight band gripped my chest and I pushed back the patio doors and stepped onto the deck, trying to catch my breath. An unseasonably warm April breeze caressed my face, bringing with it the smell of seaweed and sand. A large white butterfly settled for a moment on the guardrail, opened its wings and then took off again. I followed it with eyes that were moist and a lump in my throat the size of a golf ball. Before prison I wouldn’t have noticed it if it had perched on the end of my nose!

I took a few deep breaths and told myself that big men don’t cry, but my heart had been weeping since the day they had taken away my freedom.

Miles’s voice came quietly from just behind me. ‘I let you down, Alex. I should have found a way to get you off, or at least get you a community sentence, but your trial came at the wrong time.’

Yes, January is always a dry month for news.

And I had to be made an example of, the PR man who had swindled three respected businessmen.