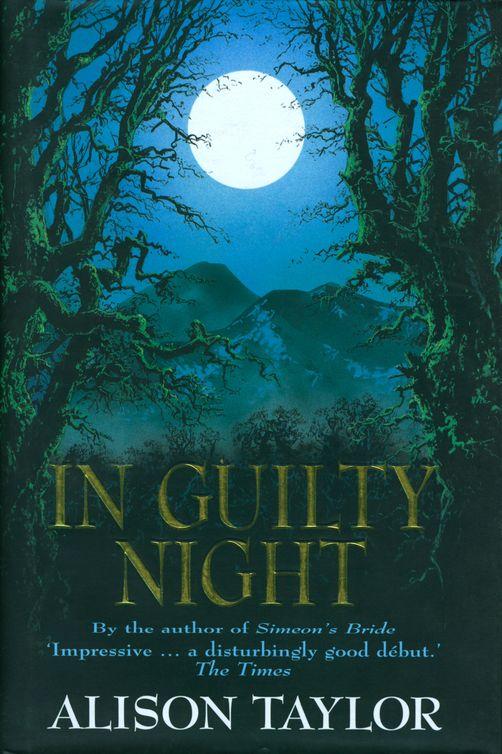 Acknowledgement is due to Aaron Taylor, without whose technical support and expertise this novel would not be possible

‘I am not wicked – fiery blood is all my malice, and my crime is youth. Wicked I am not, truly I am not wicked; though wild upsurgings oft may plead against my heart, my heart is good.’

Impatience tugging at the corners of his mouth, Jack Tuttle frowned at the figure in the wheelchair. A red honeycombed blanket, stamped on one hem with the logo of the hospital trust, slipped off the knees of the man in the chair, and to the floor, exposing torn britches and scuffed boots.

‘I could do with a cigarette,’ McKenna said.

‘You can’t have one, sir. The hospital’s all non-smoking.’ Jack retrieved the blanket, looking again at McKenna’s haggard features. Impatience surged, bettering tact and respect for rank. ‘You really should have more sense! Especially at your age!’

‘Sense about what?’ McKenna asked. ‘Smoking?’

Jack sighed. ‘And careering round on horses.’ Elbows on knees, the plastic-covered chair squeaking under his weight, he leaned forwards. ‘What on earth possessed you?’

‘One would think I’d done something completely outrageous,’ McKenna said testily. ‘I was on a horse. I fell off. Is that a problem for you?’

McKenna swore under his breath.

‘What d’you bloody think it does?’

McKenna shuddered, the sickening thud as he hit the ground and the crunch of rending sinew still awesomely loud in his head.

McKenna smiled weakly. ‘Be a pal and wheel me outside for a smoke. It’ll be ages before they strap me up.’

‘Power’s already gone to your head, hasn’t it?’ McKenna snarled. The fingers of his good arm eased a crumpled pack of
cigarettes from his pocket. Jack snatched it away, and put it in his own.

Beyond the window of Jack’s office, frosty November night shrouded the city. A few cars and a lone bus droned down the road, exhaust fumes silting the air.

‘How long will Mr McKenna be off, sir?’ Dewi Prys asked.

‘Not long, according to him,’ Jack replied.

‘Did you take him home?’

‘Can he manage on his own? Shouldn’t we see if he wants anything?’

‘Oh, for God’s sake!’ Jack seethed. ‘You do nothing but ask bloody questions!’

‘Occupational conditioning, sir. Shall I look in on him anyway?’

‘That’s nice for everybody.’

‘That’s no way to speak about your chief inspector.’

‘I wasn’t talking about Mr McKenna.’

‘And it’s no way to talk about a senior officer’s wife!’

‘I haven’t heard about any divorce.’

‘They’ve been apart over six months, and I can’t see them getting together again, for all Mrs McKenna acting like Florence Nightingale when it suits.’

‘It’s nothing to the gossip round Port Dinorwic where she’s got that posh flat on the marina.’

‘I don’t think I want to know,’ Jack said wearily. ‘There was enough backlash when they split up.’

‘All North Wales’ll know soon enough, never mind them in Port Dinorwic and us in Bangor,’ Dewi said. ‘It’s bad for Mr McKenna if she’s flaunting herself, and she’s spending money faster than water comes over Aber Falls.’

‘She gets maintenance. She’s got a part-time job. And she had half the profit from the sale of the house.’

‘Mr McKenna had less than five thousand in his pocket when the mortgage was paid off.’ Dewi picked up a file from the desk. ‘She’s managed to buy a posh new car, and she’s got more clothes than royalty. Mind you, she’s got to keep up with
the Jones-Jones, hasn’t she?’ He pulled on his jacket. ‘But I’ll leave it at that, ’cos I daresay you’ll hear the rest soon enough.’

‘And where are you going?’

‘To read the Riot Act at Blodwel. They’re still not telling us when kids do a runner.’

‘They found the last bunch of absconders.’

‘Then they can find him, can’t they?’ Jack snapped. ‘We’re not employed to chase bloody delinquents all over the county! Your tax and my tax pays for cosy places like Blodwel, and those kids go missing in droves almost every week. They should be locked up!’

‘Not half as much as the rest of us, with thieves and muggers and arsonists on the loose.’

‘Enough of them are for the few that aren’t to make no difference.’

Stifling a yawn, the engine driver applied his brakes, slowing the late express from London for the last but one stop on the long haul to Holyhead. Frost on the rails glittered before the engine’s powerful headlights, a billion tiny points of silver swallowed up in the black maw of Talybont tunnel. The wheels screamed as the brakes bit, a gentle shudder ran through the carriages snaking behind the engine, and the driver searched for debris on the line, ever mindful for mischief on this isolated stretch of track. In perfect perspective, the twin rails ran clear and bright to the tunnel mouth, then darkness engulfed the lights of the train. Or perhaps light ate up the dark, the driver thought, imagining himself carried in a moving vault of light, knowing without looking that his shadow travelled alongside on the tunnel wall, and that his reflection gleamed before him and at each side, suspended like his own disembodiment between light and dark. He lost the thought, but the dread lingered, as the engine nosed out of the tunnel, and he glimpsed the sprawled shape beside the track, its frosty hair stiff in the draught of the great engine wheels.

‘I know.’ Jack pulled on a sweater, watching her reflection in the bedroom mirror. ‘Believe me, I’d far rather stay home.’

‘It’s your job. Keeps us fed and housed, if nothing else.’

‘Denise wasn’t so understanding,’ Jack commented, turning from the mirror.

Emma smiled. ‘Isn’t Dewi Prys a gossipy old woman? He probably gets a lot of tittle-tattle from his mother.’

‘Is it just gossip and tittle-tattle?’

Emma yawned again, and burrowed under the quilt. ‘I don’t know. I haven’t seen Denise for weeks.’

‘He must’ve been brought down the embankment from the track over the tunnel,’ Eifion Roberts said. ‘Your crime scene’s not up to much, is it? All you’ll find in that undergrowth is a ton of litter.’

Sooty fungoid smells fouled Jack’s throat as he and the pathologist huddled against blackened brickwork tarnished with long cataracts of greenish salts and webbed with soot. ‘Can we move the body?’ he asked. Police and forensic officers moved slowly down the tunnel, their shadows huge in the floodlights. Water dripped relentlessly in the darkness beyond the lights, the brittle rail shuddered under his feet, whining as someone out of sight tripped, and sent a great clanging noise crashing from wall to roof and back again along the length of the vault. ‘You sure he wasn’t killed here?’

‘He wasn’t hit by a train,’ Dr Roberts said. ‘And I don’t imagine he was strolling through the tunnel and happened to keel over from natural causes, dressed as he was in his birthday suit. Or his deathday suit, as the case may be.’

‘Don’t be flippant.’ Jack watched other lights dancing through the thickets and trees along the embankment and
sparkling on the rails which ran towards the other tunnel, where the signal light hung like a dark sun, dripping bloody brilliance on frost-white ground. The moving lights disturbed the trees and tangled in their branches, the rails held the two tunnel mouths in tensile balance, and he fancied himself suspended in a mathematical environment of light and dark, perspective and absolute. He flinched as an owl swooped over the treetops, its wings beating the air.

‘Why isn’t your boss here?’ Eifion Roberts asked. ‘Tucked up in bed with his cat, is he? Better company than his wife, I daresay.’

‘Can’t you all shut up about Denise McKenna?’ Jack rounded on the pathologist. ‘Dewi Prys at work, Emma at home, you here. I’m sick of the bloody woman! I have to work with her husband!’

‘Really? What’s the latest, then?’

‘I don’t know!’ Jack snarled. ‘I don’t care! And you should be doing your job instead of gossiping about a woman not worth the time of day!’

‘This is one of those times when I hate the bloody job.’ Eifion Roberts surveyed the small shape zipped inside a black mortuary bag. ‘He’s no older than your lasses.’ Chewing his bottom lip, he added, ‘Might he be the lad still missing from Blodwel? It’s no further than a mile as the crow flies, is it?’

Icy mist off the distant mountains slithered against the windows of Jack’s office, breathing on the glass and turning day into white night.

‘He’s someone’s child, Dewi. Or was,’ he said. ‘Did Blodwel staff give you a photo of their absconder?’

‘No, sir, and they wouldn’t fill out a missing persons form either. They’d rather we minded our own business, them being social workers who know about children, and us being ignorant hostile coppers.’

‘I’d better see what they’ve got to say now.’

‘Will Mr McKenna be coming in?’

‘I don’t know. I haven’t asked him.’ Jack stood up, leaden with fatigue. ‘And he’s signed off sick for at least a week.’

Dragging his coat from the peg, Jack said, ‘And I’m sure you’ll tell him as soon as my back’s turned, so you can find out
for yourself, can’t you?’

Beyond the prefabricated buildings of the industrial estate, the lane meandered to a dead end at the gateway of a tall gabled house built as an orphanage at the turn of the century, and still home to children threatening to befoul the mainstream of society. As he parked his car, Jack thought the orphans favoured with brighter horizons than the delinquents, for behind high stone walls topped with jagged uprights of local slate, what was once a fine formal garden and shrubbery was now on one side of the drive a tangled mass of rotting vegetation and winter-brown grass, and on the other, an expanse of concrete car-park.

Curtain nets hung limp at the windows, and the building seemed filled with the mist that wreathed around its walls and obscured the rising hillside. Dim lights shone here and there inside the dark shell, but not a sound disturbed the morning, even his footfalls muffled as he trod the narrow concrete path towards the glazed front door. He rang the bell, and stamped his feet and slapped his gloved hands together. No one answered his summons. He rang again, then knocked, hammering on the glass until it shook, and a pale face loomed towards him, mouthing grotesquely.