Read In Name Only Online 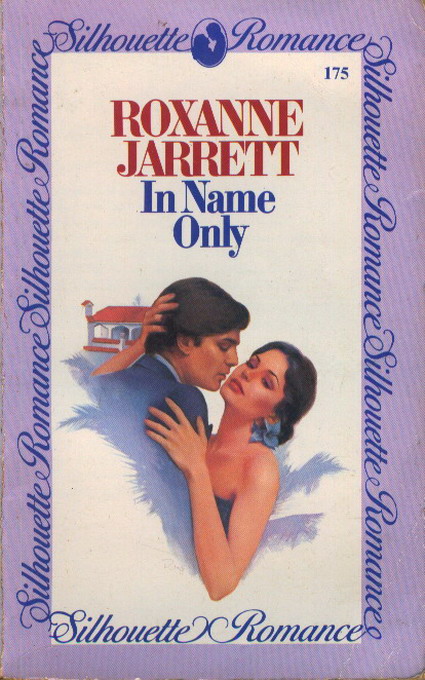 In Name Only
By
Roxanne Jarrett
Contents 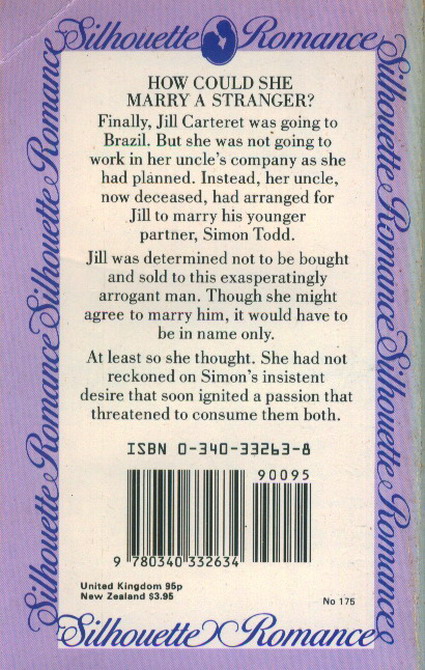 The Air Quivered Between Them.

"Never!" she cried, wrenching out of his grasp.

He stared at her for a moment. She pulled her flimsy robe more tightly about her. A smile both haphazard and cruel formed on his face. "
Never
." He gave a small, cold laugh. "
Never
is a long, long time." Turning on his heel, he walked toward the door. "Be ready at eight o'clock, my love," he said before the latch clicked shut.

Jill was left alone in the room. If you don't want me, his arrogant smile had all but said, there are other women waiting… and willing.

ROXANNE JARRETT is not only a successful author but also a professional artist. She takes time off from writing her colourful romances to show in New York and Connecticut galleries. We think you will find the characters in her novels as lively and engaging as the portraits in her shows.

Silhouette Romances is an exciting new publishing series, dedicated to bringing you the very best in contemporary romantic fiction from the very finest writers. Our stories and our heroines will give you all you want from romantic fiction.

Also,
you
play an important part in our future plans for Silhouette Romances. We welcome any suggestions or comments on our books, which should be sent to the address below.

So enjoy this book and all the wonderful romances from Silhouette. They're for
you
!

There it was on the entry table, the familiar pale blue envelope with its array of bright Brazilian stamps, and the name Carteret-Todd, S. A., in the upper left-hand corner.

"Good old Uncle Dan," Jill Carteret said to herself. "Right on time." She picked the envelope up and headed back to her room, neatly avoiding her landlady who was sitting in the darkened parlor watching television.

Flakes of a late afternoon March snow, the harsh, wind-driven snow of Chicago, still clung to her old green wool coat and knit cap as she closed the door to her room behind her. So entranced was she with the envelope and its possibilities, that she let the flakes drip and melt willy-nilly onto the worn Persian carpet.

The dream was always there, as long as she did not open the envelope. Soon Uncle Dan would send for her. Soon she would escape the dreary city, her dreary work, soon she would fly to Manaus, Brazil, to the heart of the Amazonian jungle, to a more beneficent sun and warmth without end and green. Soon, soon, soon.

The trouble was, Daniel Carteret, president of Carteret-Todd, S. A.—her only surviving relative—had never made any promises, veiled or real. She had taken his intentions for granted, that was all. He had paid her four years of tuition at the university, and her board. He had asked only that she major in languages— Portuguese, in particular. Jill had a natural aptitude for languages, and was only too willing to comply. She had done more than that. She had taken studies in Brazilian culture, Brazilian history, politics, geography. She knew its map, its climate, its length, its breadth. She had soaked up Brazil so much that sometimes she found it difficult to believe that she still wandered amongst the gray, bleak buildings of Chicago.

When Dan Carteret sent for her, she could fit with ease into Brazilian life, into the life that had drawn him, as it was now inextricably drawing his niece. That life centered in Manaus, a city of almost six million inhabitants, a thousand miles from the Atlantic, perched where the Rio Negro met the Amazon on its way to the sea. She even knew of that strange meeting, called the Wedding of the Waters, where the Negro and Amazon eddied and then rode side by side for miles before melding at last into the one mighty river.

She had thought, upon graduation in the spring, that he would send for her. As each season went by— summer, fall, and now winter, she awaited his invitation. Thus far, eight months had passed, eight months of friendly, brief letters from Dan Carteret, eight months of distant affection—and nothing more.

Positions in Chicago for Portuguese speaking college graduates were in short supply, but Jill wasn't worried. Her knowledge was special. There would be a place in Carteret-Todd for her. Uncle Dan had groomed her to work with him. She was young and willing to learn. Although she was aching for change, for adventure, to put her heart, her soul into a project and help it grow, she waited without letting him know of her ambitions. It would not do to ask for more than he had already given.

So certain was she that he would send for her, that Jill Carteret had taken a temporary job as a typist. When the time for a break came, she wanted it to be swift and clean, with no regrets.

"Now, please let it be now," she whispered. Without removing her coat, she tore the envelope open and let the slim sheet of folded paper slide out into her hand. Even before she read the few typed words, however, fear gripped her. Something had happened to Uncle Daniel. The feeling was as palpable as if it had taken shape and come sliding out of the envelope with the letter.

She closed her eyes for a second, and then opened them, forcing herself to concentrate on the terse sentences before her.

"My dear Miss Carteret," the letter began. "I will be in Chicago on March 4 for one day only. Please make yourself available at approximately 11 a.m. Sincerely, Simon Todd."

She read the letter through once again, and yet once again. What in the world did it mean? Jill knew about Simon Todd, of course, or knew at least that her uncle had a partner named Simon Todd. Was it possible that he had bad news to impart? She shook her head. The letter was too cold, too formal. He couldn't be so cruel as to keep her waiting four days more if that were the case.

Uncle Dan. Her only surviving relative. The words were like a litany. Her only surviving relative and yet they had never met. All she knew of him was through his hurried correspondence and the snapshot of him which she kept on her dresser. He looked somewhat like her father, with the same dark, wavy hair and blue eyes, both of which she had inherited, and the deep cleft in his chin—her father's, hers.

"Jill? You there?" Her landlady tapped lightly at the door.

Resisting a deep sigh, Jill dragged herself to the door. She wanted to see no one. She longed for a nice, hot bath before dinner. She wanted to concentrate on the vague message Simon Todd had sent. Least of all, she wanted to chat with her landlady, however dear the woman was.

"Wrong," said Mrs. Hughes, smiling gaily. She was a delicate sparrow of a woman who was very fond of Jill. "Dinner will be a little late tonight, so you can take your time. Fish cakes, as you remember."

If it's fish cakes, it must be Friday. "I remember."

Mrs. Hughes produced a piece of paper from her housedress pocket. "And a message. I forgot to put it out for you. Your young man called."

"Thanks, Mrs. Hughes." Jill closed the door quickly, before Mrs. Hughes could say another word, and at last slipped out of her coat and hat. Derek Fairchild, regular as clockwork. A call every Monday, Wednesday and Friday. A little early today, or had she been late coming home? Never mind. Every Saturday evening a date consisting of dinner, movie and then dancing in a noisy, blazing club. Followed at last by a sober kiss good-night at the door to the boarding house. Good grief, wasn't he as bored as she was? Why, she wondered, did she put up with it? But then, why did she put up with anything? Why had she let Uncle Dan tell her, long distance, how to run her life, and why, now, was she letting him abandon her?