Read In the Devil's Garden: A Sinful History of Forbidden Food Online

In the Devil's Garden: A Sinful History of Forbidden Food 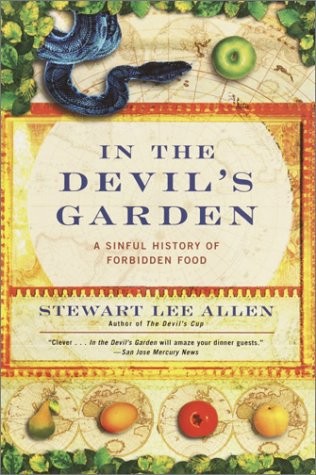 Introduction: - ON SIN, SEX, AND FOR BIDDEN FOOD

Likeness of a Roasted Crab

The Ketchup with a Thousand Faces

The Ecstasy of Being Eaten

Cocktails with the Devil

The Joy of Fat

The Egotist at Dinner

A Dinner Party in Kishan Garhi

Ghost at the Dinner Table!

The Job of Eating Well

The Wonderful World of English Cookery

The Incredibly Sad Tale of Philippe the Shoemaker

The Root of Laziness

In the Green Hour

Thou Shalt Not Eat Thy Mother

The Sacred Act of Eating

Dinner with the Spanish Inquisition

The Lawyer in Us

For What We Are About to Receive

You and Your Beautiful Hide

Only if It Has a Face

Feasting to the Death

When Everything Is Allowed and Nothing Has Flavor

“The serpent poured upon the fruit the poison of his wickedness, which
is Lust, for it is the beginning of every sin—and he bent the branch to
the earth and I took of the fruit and I ate.”

“Too long, too late, I lost the taste for my own pleasure.”

Praise for The Devil’s Cup by Stewart Lee Allen

“Who knew that the story of coffee was such a fascinating saga of cruelty, madness, obsession, and death? The Devil’s Cup is absolutely riveting, alternating between the informative and the hilarious. Essential reading for foodies, java-junkies, anthropologists, and anyone else interested in funny, sardonically told adventure stories.”

“Stewart Lee Allen is the Hunter S. Thompson of coffee, offering a wild, caffeinated, gonzo tour of the World of the Magic Bean. His wry, adventurous prose delights, astonishes, amuses, and informs.”

—MARK PENDERGRAST
Author of
Uncommon Grounds:
The History of Coffee and
How It Transformed Our World

“Funny as hell. [The Devil’s Cup] whisks the amused reader past Ethiopian bandits, around Parisian waiters, and into aromatic dens from Turkey to Brazil. Good to the last drop.”

—MARK ROSENBLUM
Author of
Olives
and
Secret Life of the Seine

“A terrific read . . . Great fun . . . Allen has as many words for coffee as the Eskimos have for snow. The Devil’s Cup does for coffee what Shogun did for Japan, Geek Love did for freak shows, and Accordion Crimes did for accordions. I’ll never look at my morning brew the same way again.”

—JEFF GREENWALD
Author of
The Size of the World

“A thoroughly entertaining, absorbing, and often hilarious jaunt through the history and geography of coffee. . . . A must have both for Java junkies and travel lovers.”

ON SIN, SEX, AND FOR BIDDEN FOOD

Jackson was lying on the kitchen counter allowing his father to change his diapers when a mysterious silver fountain rose up from between his thighs. Jackson’s eyes popped open in amazement—did I do that? What a splendid effect! What a glorious sensation! The eighteen-inch geyser hung glittering for an instant. Then it collapsed, to break directly over his father’s head and splash down his back. The crowd of relatives burst into applause. Jackson’s mother, Paula, rushed over to give her boy a congratulatory kiss. Even Troy (his father) shook his hand. I mention all this because, while flapping his little arms in triumph Jackson came upon a pale green grape bouncing across the blue tile countertop. He immediately popped the fruit into his mouth. Paula’s coo changed to a gasp of horror. No, Jackson! she screeched, No, no, no! You don’t want to eat that! Bad! She yanked the forbidden fruit out of Jackson’s maw and his jubilation was turned to grief.

The lesson my nephew learned that day was simple. Piss on your father, spit at your mother, but don’t eat
that
. And
that
is the topic of this book, forbidden foods and their meaning, from chocolate to foie gras to the potato chip, from the Garden of Eden until today. It took Jackson’s little adventure to bring home to me how profound our feelings are on this matter. Life, after all, is at heart an act of eating and so when we make a dish taboo, there is usually an interesting story to tell. The Bible used a tale of forbidden food to define all of human nature, and since then our religious and political leaders have been manipulating the notion so vigorously it has come to flavor every emotion we have about what we eat. We now judge a dish largely by how guilty we feel about eating it—at least judging from today’s advertising—and if it is not considered “sinful” we find it less pleasant.

It’s a situation that has led to the criminalizing of hundreds of common dishes throughout history, and, since we ban things because of their association with a particular sin, I’ve organized this book into sections corresponding with the famous Seven Deadly Sins: lust, gluttony, pride, sloth, greed, blasphemy, and anger. Within each section are the stories of delicacies tabooed for their association with a vice that the society in question found particularly abhorrent. The first chapter deals with lust, in honor of Eve’s illicit snack and the ensuing roll in the hay. Food and sex are a heady combination; a quarter of all people who lose the ability to taste dinner also lose their sex drive, and Freud believed all humans experience their first sexual and culinary thrill simultaneously when they begin suckling on their mother’s nipple. Our lust for aphrodisiac foods has led to the extermination of entire species and the fall of empires, per the curious tale of how hot chocolate became a risqué player in the French Revolution.

The book continues sin by sin to cover everything from how the first recorded image of God relates to certain taboos in Asia and the West, to how modern corporations manipulate our subliminal hunting/violent urges to make junk food more appealing. Since whom we invite for dinner can be as important as what we serve, there are stories on how these rules have played a part in events like the crucifixion of Jesus Christ. Disputes between “chefs,” like the one that split Europe in half, make an appearance. There are also recipes. A plate of Joël Robuchon’s famously sensual mashed potatoes should give the flavor of the sloth-like ecstasy that led the English to try to ban the root in the 1800s. The ancient Roman dish gives a taste of the gluttonous decadence that Caesar tried to stamp out when overindulgence was threatening the world’s mightiest empire.

These food taboos were so important to our ancestors that they often starved to death rather than violate them, and at least half of the world’s current population—from cow-crazy Hindus to kosher Jews to young Western vegetarians—still live with severe dietary restrictions on a daily basis. For many, these laws are crucial in defining themselves in relationship both to God and to their fellow humans, and fundamentally shape the societies in which they live. Even in the West, where outright bans are rare, food taboos still operate below the surface. Many scholars believe that psychological diseases like anorexia, which kills tens of thousands of people a year, stem in part from the complicated social psychosis left by ancient dietary laws. And sometimes when we ignore these rules, catastrophe has resulted; at least one of the greatest calamities of the twenty-first century is directly related to our violating deeply held taboos against cannibalistic activities.

What struck me while writing this book was the surprising extent to which people have judged, fought, and slaughtered others because of what they had for dinner. These laws about forbidden food give more than a unique perspective on history. They tell us quite a lot about the nature of pleasure and can turn the daily meal into a meditation on humanity’s relationship to the delicious and the revolting, the sacred and the profane.

But getting back to that first apple . . .

“And when Eve saw that the tree was good for food and that it was
pleasant to the eye, she took of the fruit thereof, and did eat, and gave
also unto her husband, and he did eat. And the eyes of them both
were opened, and they knew that they were naked. . . .”

THREE PENIS LIQUEUR WILL BE SERVED IN THE LIBRARY.

The Turning Point by Marie Meyer
Seating Arrangements by Maggie Shipstead
Going Dark by Robison Wells
Miranda's Dilemma by Natasha Blackthorne
Mercy for the Damned by Lisa Olsen
The Bells by Richard Harvell
The Wrong Man by Louis, Matthew
Winterland by Alan Glynn
An Alien Rescue by Gordon Mackay
Cat by Any Other Name (9781101597729) by Adamson, Lydia