Read In the Highlander's Bed Online

In the Highlander's Bed 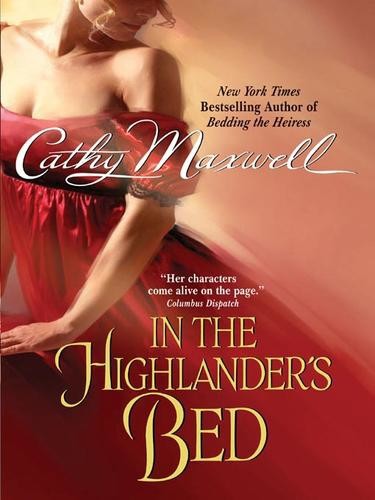 In the Highlander's Bed

In the Highlander’s Bed

This one is for you, Samantha.

May your world be filled with adventure,

laughter, and, of course, love.

Gordon immediately knew which young woman in the room was…

Gordon had not expected the attack. He had anticipated anger,…

Gordon could taste Constance Cameron’s astonishment, her shock, her inexperience…

The movement of the horse and her tied hands forced…

Gordon called Constance when he was ready to leave. She…

The pleasure Gordon felt at accomplishing this mission, the pride…

Constance was still a bit dazed after the fall from…

Constance didn’t move. She was paralyzed by what she saw…

The accusation stung with a hint of truth.

Silence fell upon the camp as Gordon made his way…

“So, are you my brother’s mistress now?”

Yes, Constance wanted to cry out. This was what she’d…

The bleeding was coming from the side of Brian’s head.

“Constance, may I come in?” Miranda asked from the other…

In surprisingly short order, Phillip found someone for Constance to…

Fiona and Grace were not up when Charlotte and the…

Other Books by Cathy Maxwell

Or so Gordon Lachlan reminded himself as he raised his hand, an order for the three men he traveled with to halt on the moonlit road.

His plan was to kidnap Miss Constance Cameron, a pupil at Madame Lavaliere’s Academy for Young Women, and the Duke of Colster’s sister by marriage. The price of her ransom would be the Sword of the MacKenna, a weapon revered throughout the Highlands. The man who wielded that sword would have enough power to lead his countrymen into the very bowels of hell.

Gordon didn’t want to go that far. He just wanted to throw the English out of Scotland, and he needed the authority of the Sword of the MacKenna to do it.

Unfortunately, Colster wasn’t of a mind to hand it over to him. The fine duke had forgotten his Scottish loyalties. Upon accepting his title, he’d sworn allegiance to the king. So Gordon knew he was going to need coercion. He didn’t want to kidnap Miss Constance Cameron, but His Grace left him no other choice.

“Dismount and lead your horses up across the ditch into the trees,” he ordered softly. “We’ll walk from here. The school is about a mile through that pine forest. Wait until your eyes adjust to the darkness before you move. I don’t want any stumbling around.”

Horses and riders crossed the ditch by the side of the road. They had just melted into the shadows of the trees when a rumbling vibration beneath their feet warned them they were not alone.

Gordon and his men raised their hands to their horses to keep them quiet just as a large party of men came galloping on the road, heading toward the Academy.English soldiers . Mostly officers, by the amount of gold braid on their uniforms. Moonlight turned the red of their military jackets to black and their wigs to silver. They were obviously from the garrison at Edinburgh, and riding as if eager to reach their destination.

The four Scots waited until the soldiers had safely passed. Thomas was the first to break the silence by spitting his opinion of the English on the ground. He was a giant, a bear of a man, with black hair he wore pulled back in a queue under a wide-brimmed gray hat. A scruff of whiskers always darkened his jaw.

“Did you not say this road dead-ends at the school? What business would they have on this road this night?”

“You don’t think they know aboutus, do you, Gordon?” Robbie asked.

“They couldn’t,” Gordon assured him. This plan was too new and had been kept too secret to have been compromised.

“Are we going to continue?” Brian wanted to know. “They outnumber us three to one.”

“They could outnumber us a hundred to one and we’d go forward,” Gordon said. “Follow me.”

Enough of the rising moon’s thin light came through the trees to guide their path. Gordon wouldn’t show it, but he was concerned about the English.

Madame Lavaliere’s Academy for Young Women catered to the daughters of the wealthy, the privileged. There could be a number of reasons a party of soldiers could be rushing to the school.

What Gordon didn’t want was to delay his plans. Winter was upon them. He had a camp of five hundred men, women, and children who depended upon him to see them safe. He needed the Sword of the MacKenna. It would give him credit to purchase gunpowder and shot as well as food for empty bellies.

The soldiers might complicate matters a bit, but they would not deter him from his quarry. He had traveled a long way to kidnap Constance Cameron, and kidnap her tonight he would.

When he estimated they were close to the school, he motioned for Brian to hold the horses while he and the others took the climbing ropes and made their way to where the forest met the edge of the school’s vast manicured lawn.

Gordon’s plan was simple and expedient. They would wait until the students were settled for the night.

He would then climb the wall to the second-floor window where Constance Cameron slept. He’d tie her up and carry her away. His horses were fast and his men traveled light. They could outride anyone pursuing them, even a party of English soldiers.

After all, they’d done it time and time before.

However, as they came into sight of the school, Gordon came to an abrupt halt in surprise. The school was ablaze with light. Grooms walked horses along the front drive, while the faint but distinct sound of fiddles and drums drifted in the air toward them. Among those grooms were several of the king’s soldiers holding some very fine horses.

They were having a bloody dance.Gordon swore in disbelief and ordered his men back into the shadows with a curt gesture.

Gordon didn’t answer immediately. Madame Lavaliere’s academy had been an abbey back in Scotland’s Roman Catholic days. Over the centuries, towers and buildings had been added. “Her room is on the second floor by that far garret.” He’d paid a maid for the information. Obviously, the puss had forgotten an important detail—like the dance. “I was to be in and out in ten minutes.”

“After dancing all night, they’ll be sleeping all the better,” Thomas said. He leaned against a tree, making himself comfortable. “At least now we know why the Sassenachs were in such a hurry.” He referred to the English soldiers. “They’ve come awoo ing.” He drew out the syllables of that last word, making Robbie smile. “They want to catch a rich man’s daughter. We should go dancing, too.”

“Och,come on, Gordon,” Thomas chided. ”You are too serious. We’ll take her. We just have to bide our time, or have you forgotten the price on your head?”

“How can I, with you reminding me of it every time I turn around?”

Thomas grinned, unrepentant. “You’re just lucky it’s such a pittance or even I might be tempted.”

“As if you’d dare,” Gordon shot back good-naturedly. He and Thomas had been boyhood friends.

Many a time, each had trusted the other to guard his back. “You aren’t so big and ugly I can’t still take you.”

“What? And mark your pretty face? The lasses would never forgive me, would they, Robbie?” Thomas settled himself more comfortably against his tree before continuing philosophically. “Then again, such golden looks are wasted on Gordon. He’s practically a monk.” He rolled his eyes heavenward. “God, why couldn’t you have given that face to me? I’d have put it to good use. Instead, it’s my lot to console all the lasses Gordon rejects. Sometimes it’s more work than one man can stand.”

Robbie’s teeth flashed white in his smile. “I’m always happy to help if you need it—”

“I can manage,” Thomas assured him quickly. “Some tasks are a pleasure.”

Gordon only paid half an ear to their banter. He’d never enjoyed cooling his heels, although it seemed as if he’d been waiting forever for that moment when he could avenge his father’s death.

Whatwould his father have said?What advice would he offer in circumstances such as this? He’d been a prudent man, an honest one.He would have waited.

“No,now .” Gordon turned and headed back toward where they’d left the horses. “I’m going to the dance.”

Thomas and Robbie hurried to catch up with him. “What are you planning to do?” Thomas asked furiously. “Walk in there and ask Miss Constance for a dance?”

“Yes. That’s a good plan,” Gordon answered. The more he thought about it, the more he liked it. He rubbed a hand over his chin. “I need to shave. Any of you have your kit with you?”

“I do,” Robbie said. It stood to reason. Robbie was the dandy of the group.

“Let me have it. And your jacket, too. It’s better than my own.”

They’d reached Brian, who appeared confused that they’d returned so quickly and without Miss Constance. But before he could ask questions, Thomas blocked Gordon’s path, saying, “Have you forgotten you are a wanted man?” There was no teasing in his tone now.

Gordon laughed, his spirits rising at the challenge. “Those soldiers won’t recognize me,” he said with confidence. “Or even my name. Most likely they haven’t ever heard of Nathraichean. And if they have, they’ve forgotten, especially when there are heiresses to court. They are thinking about themselves. But someday soon, lads, they will know our names, and they’ll never forget them. As for now, I’m going to the dance. I want to see this Miss Constance up close, and perhaps, with a wee bit of luck, I may pry her away from watchful eyes and save us a climb up a wall. Or were you looking forward to that, Thomas?”

The giant grumbled his answer.

“What was that?” Gordon prodded.

“I said, come here, and I’ll shine your boots,” Thomas answered with little grace. “If you want to play the gentleman, then I won’t stop you. I might even come to your hanging so I can laugh.”

“I’d appreciate that,” Gordon replied, slipping on Robbie’s coat. “Now, what do you believe the odds are that I can steal one of those officers’ fine horses as I’m leaving?”

“Grab the gray,” Thomas advised. “It will show up better in the dark when they come chasing you.”

That’s why Constance Cameron had decided to run away tonight. She’d had enough of Scotland, enough of England, and enough of her overbearing sister Charlotte. She wanted to go home, to return to the Ohio Valley, where she could talk to folks without wondering who was introduced to whom, dance without being “taught” steps, andread a book instead of walking around with it on top of her head.