Read In the Running Online 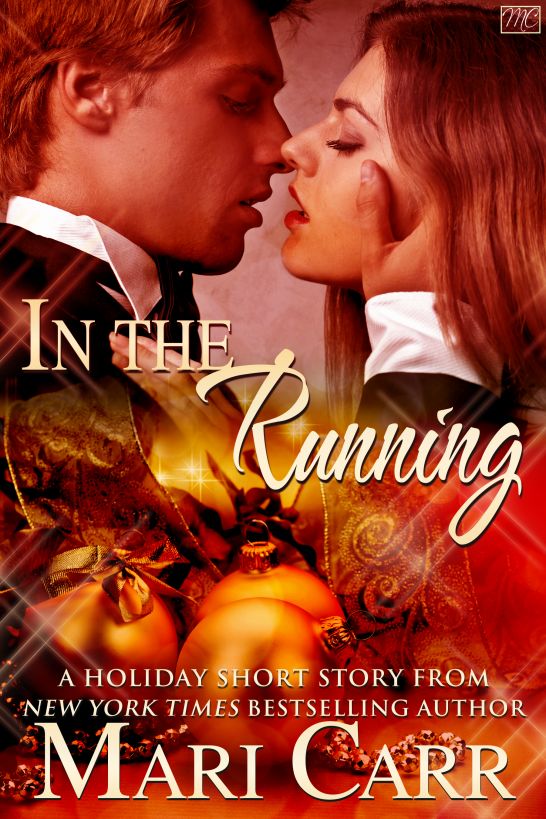 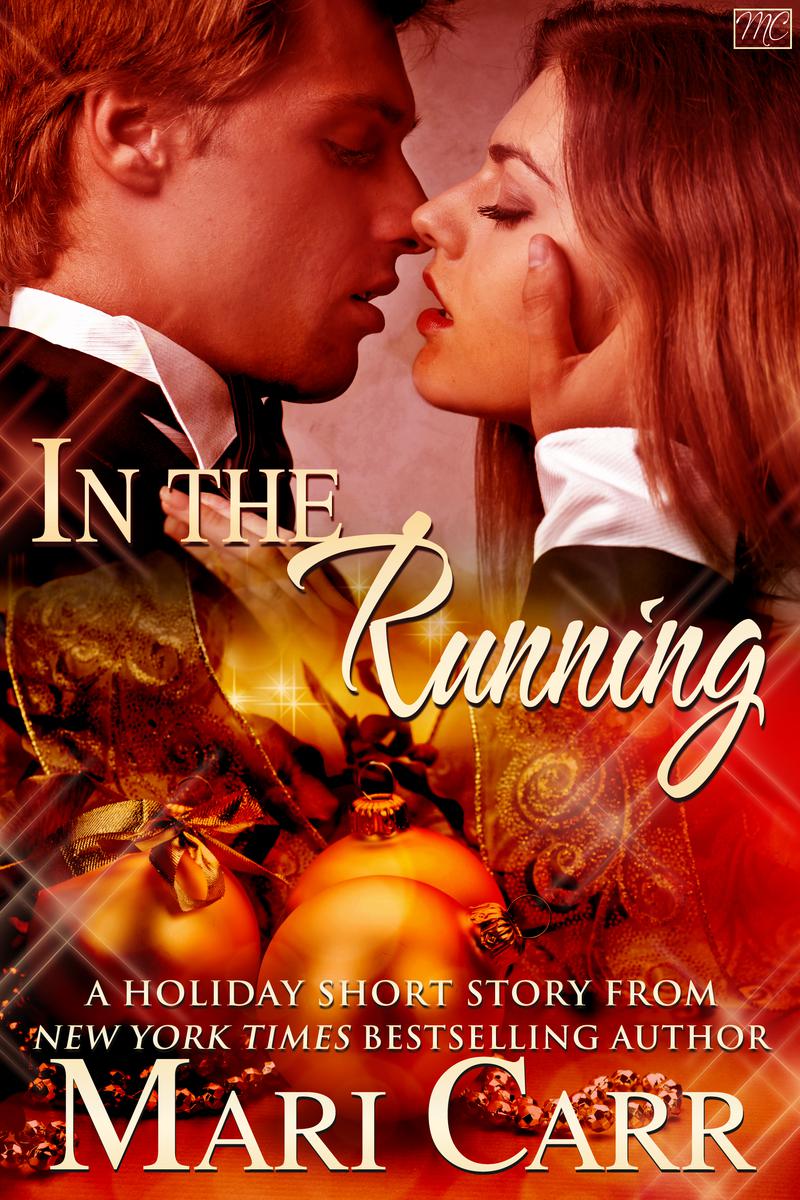 In the Running
A holiday short story

This book is a work of fiction. The names,
characters, places, and incidents are products of the writer’s
imagination or have been used fictitiously and are not to be
construed as real. Any resemblance to persons, living or dead,
actual events, locale or organizations is entirely
coincidental.

This ebook is licensed for your personal
enjoyment only. It may not be re-sold or given away to other
people. If you would like to share this book with another person,
please purchase an additional copy for each recipient. If you’re
reading this book and did not purchase it, or it was not purchased
for your use only, then please return to
smashwords.com
and purchase
your own copy. Thank you for respecting the hard work of these
authors.

What happens when the man of your dreams is
also the chief of state?

Noelle falls head over heels for Tom after
they meet online. When they decide to meet in person for the first
time over Christmas, Noelle gets a hell of a lot more than she
bargained for from Santa!

Editchick: So I made it through day 497 with
relative ease.

RunningMan: You know, at some point, you may
want to consider not counting the days anymore.

RunningMan: I think it has something to do
with that healing process everybody talks about so much.

Editchick: How many days for you?

Editchick: Jeez. Practice what you
preach.

RunningMan: Yeah, I know. What are you doing
now?

Editchick: About to go to bed. Long day at
work. Must be a full moon tonight—the other editors in the office
were bouncing off the walls. I’m beat. You?

RunningMan: Got a few things to take care of
before I can sleep.

Editchick: You work too hard.

RunningMan: Wondered when you were going to
work that comment in. You say the same thing every night.

Editchick: Gotta stop and smell the roses,
Tom. What are you doing for the holidays?

RunningMan: Same thing as always. Flying
around the entire world spreading the joy and magic of the season
to millions of children in a single night.

RunningMan: That’s me. Jolly old St. Nick.
What about you?

Editchick: Same as last year I suppose. Just
getting through the day.

RunningMan: How about getting through the day
with me?

RunningMan: What do you say, Noelle? After a
year of phone calls and IMs, don’t you think it’s time we finally
meet face to face?

Editchick: What about all those poor kids
waiting for Santa Claus? Won’t you be missed?

RunningMan: Even Santa deserves a day off. Is
that a yes?

RunningMan: I’ll make the plans, book us a
hotel somewhere nice. Leave it all to me. You won’t have to do
anything except pack.

Editchick: Sounds wonderful. I guess I’d
better call it a night. I’ve got work tomorrow and it’s getting
late.

Noelle stared at the computer screen,
wondering what exactly she’d just done and trying to still the
initial panic she felt at agreeing to spend Christmas with a
virtual stranger.

He’s not a stranger, she muttered to herself.
He’s Tom.

She logged off her computer and unplugged the
Christmas tree lights in her living room before starting her
nightly routine. She checked the downstairs windows and doors,
making sure they were locked, and then headed upstairs to her
bedroom. The hardest thing after Troy’s death had been learning to
sleep in their old house alone. The second hardest thing had been
celebrating the holidays—any holiday—alone, although Christmas
certainly seemed to top the list.

She wondered if she’d ever have survived her
husband’s untimely death at all without Tom’s companionship. Her
grief counselor had hooked them up shortly after Troy passed
away—their common bond the fact that they’d both lost someone
they’d loved—a spouse—to cancer. Tom had become her anchor this
past year, never failing to contact her, whether by IM or email or
phone call.

Although he seemed to be on the road
constantly and he kept some erratic work hours, she was impressed
and amazed by his devotion to their long-distance relationship. If
anyone asked her who her best friend was, she would say Tom without
hesitation, despite never having seen his face. Hell, she didn’t
even know his last name.

Now she was going to be spending Christmas
with him. It didn’t seem possible that at last she would be meeting
the man who’d come to mean so much to her. She worried briefly that
perhaps the real man wouldn’t meet her expectations, especially
given that she was certain she’d fallen more than a little bit in
love with him.

She picked up her cell phone as she climbed
the stairs and checked the clock. It was past eleven. Julia would
probably kill her for calling so late, but she really needed to
talk to someone.

“Were you asleep?” Noelle asked.

Noelle smiled. In addition to being her
sister-in-law, Julia was a dear friend, never too busy to talk to
her, a fact that Noelle had relied on heavily during the first few
months after Troy’s death. Julia had married Noelle’s older
brother, Ross, and the two of them had never failed to provide
comfort and a shoulder to lean on when Noelle needed them, helping
her through some of the darkest days of her life.

“Tom wants to spend Christmas with me.”

“Really? You don’t think I’m making a
mistake?” Noelle was relieved to be able to voice her fears.

“Dear God, no,” Julia answered. “I’ve been
telling you for months to set up a meeting with the man. It’s time
to move on, Noelle. Stop running away from the future. Give
yourself a chance at happiness.”

“I had happiness. Maybe I’ve already had my
lifetime allowance of that emotion.”

“Don’t be ridiculous. Tom seems like a really
great guy and he’s been a devoted friend to you this past year even
if he does seem a bit conservative and stuffy.”

“He’s not stuffy,” Noelle replied, all too
aware of where this conversation would lead.

“Oh please,” Julia teased. “I guarantee you
he voted for Evan Rhodes in the presidential election. It’s
probably Tom’s fault we’re about to be saddled with that Republican
in the Oval Office for the next four years.”

Noelle struggled not to roll her eyes. Her
sister-in-law was a diehard Democrat and she’d taken her party’s
loss in the latest presidential election hard. “You know, Julia,
you’re really going to have to let the election go. I’ve been
reading some of the interviews Rhodes has done since winning and
maybe he won’t be as bad as you think.”

“Yeah, well, that remains to be seen. So
where are you going to meet Tom?”

“I don’t know yet. He said he’d plan the
whole thing, find us a hotel and all I have to worry about is
packing.”

“Hmmm, sounds romantic. You know, I’ve been
thinking Ross and I should take a little trip over the holidays as
well.

Noelle grinned. “Is that right?”

“Well, actually, you and I both know hell
would freeze over before Ross would let you run off to meet this
guy alone.”

“Would there be a point? This is Ross we’re
talking about.”

“You won’t even know we’re there,” Julia
assured her. “We’ll just check into the same hotel and be close by
if you need us. Even though I have no doubt Tom is a great guy, you
can’t be completely sure.”

Admittedly, Noelle felt relieved by Julia’s
suggestion. One of her biggest concerns about accepting Tom’s
invitation had been the ingrained fear associated with meeting
someone online. With her family nearby, that problem would be
solved.

“Okay. You’re right. This could be a lot of
fun. God knows it would be better than the three of us hanging
around that Charlie Brown Christmas tree Ross dragged over here for
me.”

Julia laughed. “Is it still shedding?”

“I swear there are more pine needles on the
floor than on the tree and it’s only the first week of December.”
Chuckling, Noelle sat down on her bed and relaxed for the first
time since Tom’s proposal. “I’ll let you know the details as soon
as Tom contacts me. Julia, I don’t know how I can thank you
for—”

“Hush,” Julia interrupted her again. “You’re
my sister and I love you. You’d do the same for me. Can I go back
to sleep now?”

“I knew you were asleep!”

The three weeks since Tom’s suggestion that
they meet for the holidays seemed to alternate between flying by
and crawling along at a snail’s pace. Every day lasted an eternity.
However, now that the day they would meet had actually arrived,
Noelle felt completely ill-prepared.

She’d driven from New York to Washington D.C.
with Ross and Julia and she had to admit having her family come
with her had been a godsend. They’d had such a fun time, talking,
laughing, and singing Christmas carols Noelle had forgotten her
nervousness until this moment. They’d gone to check into their
hotel room and she’d been left to her own devices in the swanky
penthouse suite Tom had reserved for her.

Tom had called to say he had checked in and
was on his way over. Apparently, he’d reserved the other penthouse
suite on the floor. She couldn’t believe he’d basically booked the
entire floor of a five star hotel.

She checked her face in the mirror once more
when she heard a knock on the door. She took a deep breath and
crossed the room. Flinging the door open with her heart racing, she
watched Evan Thomas Rhodes, President-elect, enter her room.

“Noelle?” he asked, his voice betraying his
discomfort. She could only imagine what emotions he saw flying
across her face. Anger, excitement, disappointment, amazement,
fear, relief, happiness.

“Shit,” she whispered when she finally found
her voice. “You’re a Republican.”

He grinned and took a step toward her. Before
she could retreat or consider what he was doing, he placed his
hands gently on both sides of her face. “And you’re beautiful.”

She didn’t have time to utter a protest.
Hell, she didn’t have time to open her mouth before his lips
descended on hers. She returned the kiss without a moment’s
hesitation. This is what she’d hoped for, prayed for, waited for.
The fact he had just won the election and would be President of the
United States in twenty-seven days ceased to matter the second his
lips touched hers.

She reached up to run her fingers through his
light brown hair, losing herself in the joy of finally meeting her
best friend. For several moments, they remained connected, touching
each other, sharing the same air until reality crashed in on her
and she pulled away.

The Uncertain Customer by Pearl Love
Guards of Haven: The Adventures of Hawk and Fisher (Hawk & Fisher) by Simon R. Green
Portal to Passion by Nina, Tara
Winter’s Awakening by Shelley Shepard Gray
Pascale Duguay by Twice Ruined
The Color of the Season by Julianne MacLean
Markings by S. B. Roozenboom
Melanthrix the Mage by Robert Reginald
Hate Me (Worthy Of Love series, #1) by Shota, H.C
29 - Monster Blood III by R.L. Stine - (ebook by Undead)