Read In the Shadows of Children Online

In the Shadows of Children 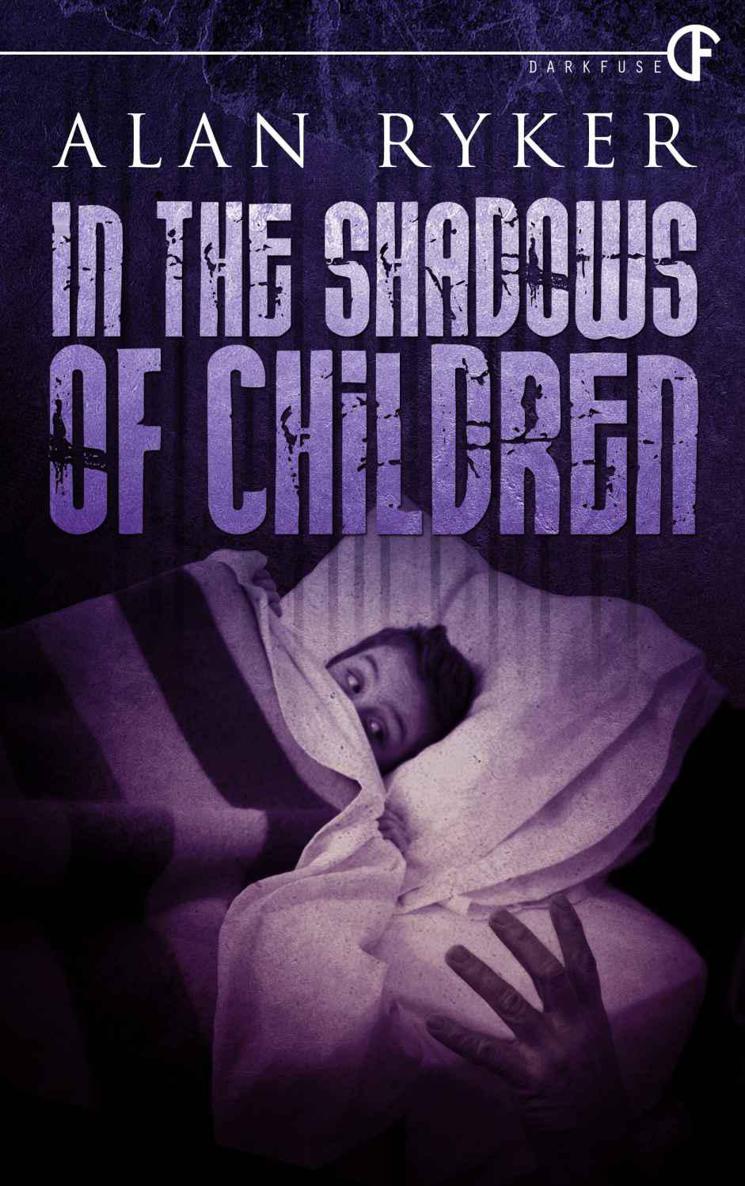 IN THE SHADOWS OF CHILDREN

In the Shadows of Children

Other Books by Author

Dream of the Serpent

Check out the author’s official page at DarkFuse for a complete list:

Thanks to everyone at DarkFuse who helped in the creation of this book, especially Dave Thomas, Shane Staley, and Zach McCain.

Aaron stood paralyzed in the second-floor hallway, the landing dimming as evening deepened. Two doors opened to his left, two to his right, and behind him, the stairs. The doors to his left led to the bathroom and his parents’ bedroom, his mother’s room for the seven years since his father’s passing. He should go in there, look through the boxes of old photos and mementos, the crayon drawings and report cards. He couldn’t bring himself to do it.

The first door on his right was his childhood bedroom, the one he’d shared with his little brother, Bobby. He took a step toward the open door.

The room didn’t look the way he’d left it, exactly, but it was close. At least Bobby’s half. Death metal posters hung on the walls, bands in corpse paint glaring out at him, and Aaron’s old things no longer occupied a full half of the room, but were shoved into a corner.

Still, it was amazing they were there at all after fifteen years. His mother didn’t seem to have touched the space. That wasn’t true. Even from the hallway, Aaron could see the room had been tended to. She’d dusted. She’d vacuumed. But she’d left everything else the same.

Aaron’s eyes danced around the room, settling briefly on trophies and other childhood memorabilia that should have evoked fond memories, but every time his eyes drifted over the closet’s closed door, a huge hand clamped down on his rib cage, wringing adrenaline out of his heart like it were a wet sponge.

He couldn’t go in there. Not yet.

That left one room, his mother’s sewing room, where she’d made their family’s supplementary income doing alterations. The room that made it necessary for him and his brother to share a bedroom even after Aaron had turned eighteen.

He supposed if his mother hadn’t done the work she had, he and his brother wouldn’t have been so close. For all the good it did Bobby.

But despite the sewing room’s pivotal role in his development, nothing within mattered much to him. He’d have taken the sewing machine if it were the same one she’d used when he was a child, when he’d lain on the floor and read, listening to the soft percussion and whir of her work. But she’d replaced it years ago with a machine that was half-computer, complete with an LCD screen, a cold appliance he couldn’t imagine any child forming nostalgic memories about.

He looked back to his mother’s bedroom. Not that night.

His head hurt. Aaron had wanted to get this over with quickly, which wouldn’t happen if he never got started. He sighed and began to turn to the stairs.

Then his heart pounded so hard that he gasped and his vision blackened before fading in again. His head whipped back to his old bedroom and saw the change, the one that had caused a tickle in the back of his brain, the one his subconscious mind had worked to figure out.

Aaron didn’t pause to consider if his previous impression of it being shut might have been mistaken. He didn’t think about how it might have slipped open on its own. He turned and ran.

His feet tangled and he nearly fell. Both hands slapped the banister and halted his forward movement long enough for him to get his feet beneath himself again so he could continue his dash. He didn’t slow down until he’d burst out the front door, and didn’t stop entirely until he’d descended the porch and made it almost to the sidewalk.

He looked over his shoulder to make sure nothing had followed him out.

Why was he so scared? He was a grown man. It was an empty house, a place he knew well, where he’d grown up in perfect safety.

Some part of him wasn’t convinced, a part that didn’t put instinct into words because that took too long, because in that time you could be killed by things that didn’t pause to remember, weigh, and judge before eviscerating you and dragging you to their lair to consume you at their leisure. That part of his mind told him to run, to keep running until he hit the West Coast, just like last time, just like fifteen years ago.

Which was ridiculous. Fifteen years ago he hadn’t run. He’d left for California to go to college, and stayed because of the opportunities it presented a young computer programmer.

As Aaron stared into the open doorway, his breath came out in shudders. He thought he might be trying to laugh until he understood where his eyes had settled: at the foot of the stairs, where they’d found his mother’s crumpled body.

He turned away and fished a pack of cigarettes out of his pocket as he walked around the side of the house.

Aaron took a drag off his cigarette and released the smoke into the cold, late-winter evening air as he tried not to think about anything, despite the forces conspiring to make him do so. His head hurt with the effort, and swam with the nicotine. He’d quit smoking more than ten years back, had started in high school and quit after college. These were his mother’s.

Had been his mother’s.

The sun hadn’t set, but he couldn’t see it any longer behind the forest that backed his childhood home. Well, they’d called it a forest, but it was really a river with maybe a half a block of dense foliage on each side.

Skeletal limbs framed patches of red sky like stained glass, and above it the world turned from iron gray to black. It was beautiful, and yet every sight made him anxious. No—fearful. He needed to admit to himself that it was fear. Fear he had forgotten.

The scariest part was that he couldn’t remember why he’d ever been afraid. He couldn’t figure out why the open closet door had sent him into instinctive, panicked flight. His fragmentary childhood memories were happy. But confronted with the physical space in which those memories took place... He wanted to run all the way back to California, to a sky that never looked like this. Was it guilt?

And yet even as part of his mind asked what he had to be so afraid of, another kept his back turned to the house, kept him staring into the dying light.

Glancing at his watch, he saw that he’d been standing outside, staring and smoking these horrible, wonderful cigarettes for almost half an hour.

“How are you doing?” asked a deep voice to Aaron’s right. Mr. Jackman.

Usually, people asked how “things” or “it” was going. After a funeral, it was always “you.”

Aaron searched the man’s deeply lined face for accusation but couldn’t find any. He looked over at him, seeing in the dim light that he’d changed out of his suit into his usual jeans and flannel coat.

Mr. Jackman nodded, then squinted straight up, staring into the same memories Aaron was trying to avoid. Aaron supposed that’s why he’d been staring straight ahead since he’d gotten there. “Since your father passed. And seven before that, your brother. Supposed to be a lucky number.”

“Nobody knows what happened to my brother,” Aaron said, turning his focus from the last red hints of a setting sun. His old neighbor withered a little more beneath his gaze. He’d seemed so tall once.

“ I didn’t mean anything by it. Just thinking out loud. It is an interesting coincidence.”

“Well, I didn’t mean to interrupt you. Meredith sent me out here, wanted to see if you needed anything. You eaten?”

Aaron thought back to the refrigerator stuffed with food that people from the neighborhood had brought by. Food he hadn’t touched. “Yeah, I’ve eaten. I’m going to be taking off for the day soon, anyway.”

“You’re not staying in the house?”

Aaron shook his head, sucked the cigarette down to the filter. A few minutes ago he’d never wanted to step foot in his childhood home again. Now, he couldn’t wait.

“I suppose I might not want to, either,” Mr. Jackman said. “How’s your family? We were hoping to get a chance to meet little Elijah. Though I suppose he’s not so little anymore. We’ve seen so many pictures of him, we feel like we know him.”

Aaron flicked his filter to the ground and quickly said, “He and Sarah are good. Well, I’ve only got a few days, so I better get back to work.” He didn’t feel like making excuses. He felt like removing himself from the conversation.

Mr. Jackman looked at him. “Are you sure you’re up to this right now? You could let things settle in and come back another time.”

“There isn’t going to be another time. I’m sorting out the few things I want, taking care of some details, and then I’m gone for good.”

Mr. Jackman nodded slowly. He didn’t seem to know how to respond. Aaron realized how he’d sounded and supposed the old guy couldn’t figure out where that hostility came from. His dead parents? The town? Mr. Jackman? Aaron supposed he wouldn’t have been able to answer that question if Mr. Jackman had been able to ask it.