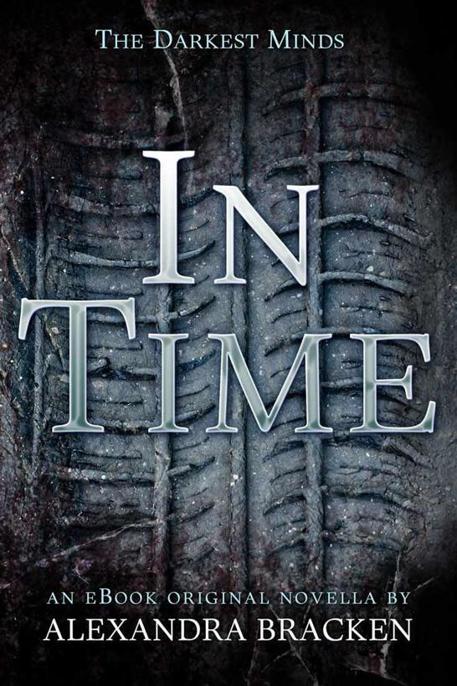 All rights reserved. Published by Hyperion, an imprint of Disney Book Group. No part of this book may be reproduced or transmitted in any form or by any means, electronic or mechanical, including photocopying, recording, or by any information storage and retrieval system, without written permission from the publisher. For information address Hyperion, 125 West End Avenue, New York, New York 10023.

S
OMETIMES
, even when the roads are quiet and the others are asleep, she lets herself worry she made the wrong choice.

It’s not that she doesn’t like the group—she does. Really. They stick together and they play it smart, driving on side streets as much as they can instead of the highways, with the open, endless fear those offer. They’re never mean unless they’ve gone without food or sleep or both for too long, or when they’re scared. When they camp for the night, they sleep in a great big circle, and the girls like telling stories about the kids they knew in Virginia, at East River. They all laugh, but she has trouble putting the faces to the names. She can’t remember where the lake was in relation to the fire pit, and she wasn’t there that one time they all put on a play for one another. She wasn’t there because she was with her friends. She was in a different car, a better one, a happier one. Because when the girls stop telling these stories, the same ones over and over again, there’s only silence. And she misses the warmth of her friends’ voices, even if they were just whispering, lying and saying it would all be okay.

Maybe it’s bad—she doesn’t know—but secretly she’s glad no one expects her to tell stories of her own. That way she gets to keep them to herself, tucked tight against her heart. She presses her hand there when she’s scared, when she wants to pretend it’s them teasing and laughing and shouting around her, and not the others. When she wants to feel safe.

She keeps her hand there all the time. Now.

The mountains around her are flying by and the girls are screaming that they need to go faster, faster, faster. She sees the car through the back windshield of the SUV. The man hanging out the passenger-side window looks like he is aiming the gun directly at her. The driver has a face like he’d be willing to drive through a firestorm to get to them, and she hates him for it.

She wants her voice to join with the others’ screaming and crying. The words are lodged in her throat. The boy behind the wheel needs to stop the SUV, slam on the brakes, let the monsters chasing them get out of their own car and think they’ve won. We are five to their two, she thinks, and if we can catch them by surprise—

But their SUV is suddenly flying like it’s gone up a ramp. The seat belt locks over her chest hard enough to steal her breath in that one second they’re in the air—then they’re spinning, the glass is smashing, the car’s frame is twisting, and not even she can hold in her screams.

L
ISTEN
, no matter what anyone tells you, no one really wants this job.

The hours are endless and the pay is crap. No, I take that back. It’s not the pay that’s crap. There’s a sweet little penny in it for you if you can hook yourself a decent-sized fish. The only thing is, of course, that everybody’s gone and overfished the damn rivers. You can drop in as many hooks as you want, buy yourself the shiniest bait, but there just aren’t enough of them still in the wild to fatten up your skeletal wallet.

That’s the first thing Paul Hutch told me when I met him at the bar this afternoon. We’re here to do business, but Hutch decides that it’s a teaching moment, too. Why do people constantly feel like they have to lecture me on life? I’m twenty-five, but it’s like the minute you take actual kids out of the picture, anyone under the age of thirty suddenly becomes “son,” or “kid,” or “boy,” because these people, the “real adults,” they have to have someone to make small. I’m not interested in playing to someone’s imagination, or propping up their sense of self-worth. It makes me sick—like I’m trying to digest my own stomach. I’m no one’s
boy
, and I don’t respond to
son
, either. I’m not your damn dead kid.

Someone’s smoking a cigarette in one of the dark booths behind us. I hate coming here almost as much as I hate the usual suspects who haunt the place. Everything in the Evergreen is that tacky emerald vinyl and dark wood. I think they want it to look like a ski lodge, but the result is something closer to a poor man’s Oktoberfest, only with more sad, drunk geezers and fewer busty chicks holding frothy mugs of beer.

There are pictures of white-capped mountains all around, posters that are about as old as I am. I know, because our mountain hasn’t had a good snow in fifteen years, or enough demand to open in five. I used to run the ski lifts up all the different courses after school, even during the summer, when people from the valley just wanted to come up and do some hiking in temperatures below 115 degrees. I tell myself,
At least you don’t have to deal with the snotty tourists anymore
—the ones who acted like they’d never seen a real tree before, and rode their brakes all the way down Humphreys’ winding road. I don’t miss them at all.

What I miss is the paycheck.

Hutch looks like he crawled out of a horse’s ass—smells like it, too. For a while he was working at one of those tour group companies that let you ride the donkeys down into the Grand Canyon. They closed the national parks, though, and the owner had to move all the animals back to Flagstaff, before ultimately selling them off. There’s no work for Hutch to do there anymore, but I’m pretty sure the woman lets him sleep out in the stables.

He’s been here for hours already; he’s looking soggy around the edges, and when I walked into the dark bar, he glanced up all bleary and confused, like a newborn chick sticking its head out of an egg. His hair is somehow receding and too long at once, the wisps halfheartedly tied back with a strip of leather.

Trying to speed things up, I slide a crumpled wad of money his way. The stack looks a lot more impressive than it actually is. I’ve been living off tens and twenties for so long I’m convinced they stopped printing the bigger bills.

“It’s not that I don’t think you can do it, son,” Hutch says, studying the bottom of his pint. “It just sounds easier than it is.”

I should be listening harder than I am. If anyone knows what the job’s really like, it’s him. Old Hutch tried for six months to be a skip tracer, and the prize he won for that misadventure was a burnt-up, mutilated, four-fingered hand. He likes to tell everyone some kid got to him, but seeing as he’s managed to burn down two trailers by falling asleep with a cigarette in his hand, I’m inclined to doubt it. Still, he milks it for all he can. The sight of the gimp hand gets him sympathy drinks from out-of-towners stopping in the Evergreen. Some extra nickels and dimes, too, when he’s holding a cup at the corner of Route 66 and Leroux Street, pretending his white ass is a military vet from the Navajo Nation. Somehow he thinks that combination elevates him over the rest of us bums.

He ignores me, humming along to the Eagles’ “Take It Easy,” which this bar has on loop apparently for no reason other than the fact that Arizona is mentioned once in it.

“Another one,” he says stubbornly, trying to flag down Amy, the bartender, who is doing her absolute best to deny his miserable existence. She and I have talked about this before—it’s hard to look at him. His teeth got bad over the years, and his cheeks sag so low they’re practically hanging like wattles against his neck. He’s only forty-five, but he already looks like the after photo of a meth addict—the mug shot of the killer on one of those crime TV shows they’re always rerunning. His breath alone is like a punch to the face.

I used to like Hutch a lot. He got to know my dad when he dropped off fresh produce at the restaurant. Now it’s like…I don’t know how to explain it so it makes sense. It’s like he’s a cautionary tale, only one you know you’re speeding toward without brakes. A glimpse of the future, or whatever. I just look at him and I know that if I don’t get out of this place, I’m going to be this old man who’s not even old, but smells like he pisses himself on a regular basis. The guy who spins and spins and spins on his barstool, like he’s riding the old carousel at the fairgrounds.

Hutch slides the key out of his pocket but slams his hand down over it when I reach for it. His other hand traps mine, and then he’s looking at me with these wet, feverish eyes. “I loved your daddy so much, Gabe, and I know he wouldn’t want this for you.”

“He tapped out, which means he doesn’t get a vote,” I said, ripping my hand free. “I paid you. Now tell me where you parked it.”

For a second, I’m sure he’s going to tell me he parked it at the mall, and I’m going to have to walk my ass up the highway for an hour to get there. Instead, he shrugs and says finally, “On the north end of Wheeler Park. On Birch.”

I slide down from my stool, finishing off the pint I just paid fifteen bucks for. Hutch is still watching me with these eyes like I can’t describe. He pauses, then says, “But I’m telling you now, you ever find someone who likes the job, you better goddamn run the other way because you’re looking at the real monster. You’re looking right at him.”

I take my time walking to downtown—excuse me, “Historic Downtown,” they call it, like it needs that distinction because there’s another, more important downtown in Flagstaff, with skyscrapers. I take my time because the sun is out and it’s a beautiful blue-sky morning—the kind that usually makes everything beneath the sky seem that much shittier in comparison, but not today.

Out of the corner of my eye, I see the old train station where my dad and I used to lay pennies to be mauled on the tracks. For the first time in years, I consider crossing the street to sit on one of the benches, just because I know I’ll never do it again. I don’t know how I’d pass the time besides sit, though—what few trains are still running don’t take this route anymore. I’ve been doing a lot of that lately. Sitting around, doing nothing, thinking about work but not finding it. I think that’s the problem, all that sitting; it leads to thinking about all this bullshit, about the parks they had to turn into graveyards, about Dad’s restaurant’s still being empty after all these years, about the fact that we had to move to a new trailer because we couldn’t get the blood off the walls of the old one.