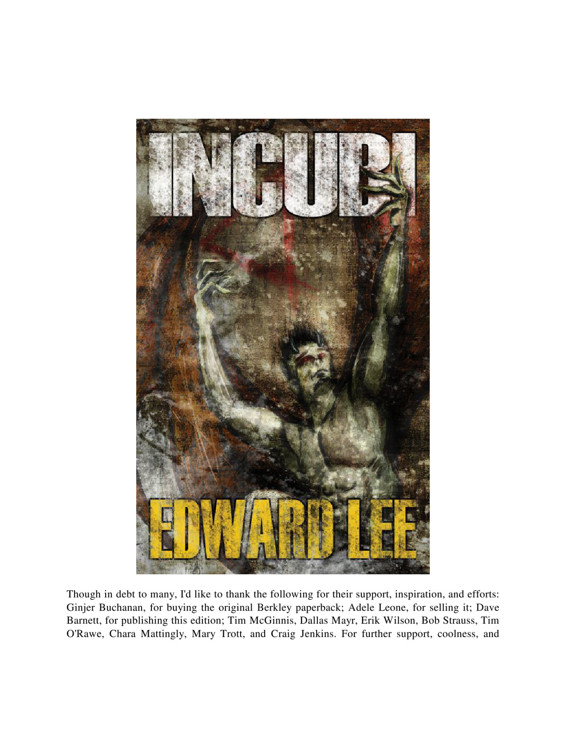 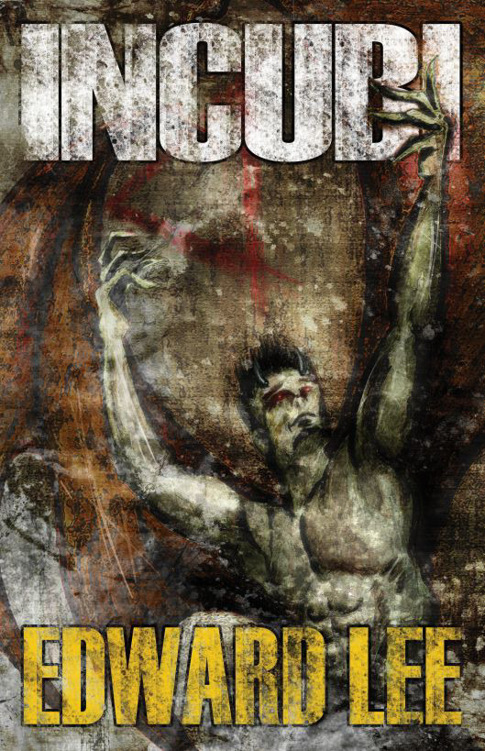 Though in debt to many, I'd like to thank the following for their support, inspiration, and efforts: Ginjer Buchanan, for buying the original Berkley paperback; Adele Leone, for selling it; Dave Barnett, for publishing this edition; Tim McGinnis, Dallas Mayr, Erik Wilson, Bob Strauss, Tim O'Rawe, Chara Mattingly, Mary Trott, and Craig Jenkins. For further support, coolness, and ineffability: Amy, Billy, Christy, Julie, R.J., Scott, and Stephanie. Thanks also to Tony & Kim at Camelot and Larry Roberts. For eleven-year-old existential absolution, thank you, Howard Devoto. I'm free.

"Did you say something?" the girl asked.

Her breasts were erect chiffon orbs. She lay back on the bed, displaying the trimmed, dark plot of her sex. The man gazed openly, and again he thought: Aorista.

"I said you're very beautiful."

"You're beautiful too." Desire drenched her voice, or distilled it. "Don't make me wait," she murmured, and squirmed a little.

The man stood at the foot of the bed. "Let me look at you awhile first. You're beautiful, and I want to look."

She settled back and closed her eyes. She was beautiful, and her beauty sang to him. In the room's raw light, her white nakedness poured over his senses like hot wax. He could consume this vision; he could lap it up as a famished cat laps milk. It was not lust which exhorted his arousal, it was passion for all that she was, the beauty of her spirit as well as her flesh.

Flesh through blood, his thoughts whispered to him. Body through spirit.

She opened her legs. "Is this what you want to look at?"

She parted the pink cleft with her fingers. The opening shined like sunlight on a lake. "Please, please," she whimpered.

At once, the man was on his knees, tasting her. She moaned. The man spread the white thighs further and rubbed his mouth over the moist entry, licking. He thought of beauty and creation, avatars and darkness, life and death. He thought of love.

For there could only be one real truth in the world, couldn't there? Love? It had to be love.

He laved her into a fever pitch with his tongue. Her hips flinched and she whined. Her excitement poured out of her.

Then, abruptly, the man stood up. The shadow of his erection played over her breasts, a serpent roving a white vale.

Her eyes caressed him. He could see the anguish there, the desperate passion. It filled her breasts.

It stuck her big dark nipples out like plugs. Yes, passion. It beckoned him.

In each hand now he held a length of cotton rope.

Flesh through blood. Body through spirit.

Yes, the only real truth.

And it was with love that he next began to open her with the black blade. "I am risen," came the voice, but whose voice was it? His own or his god's? Father, he dreamed as he cut. Her flesh parted serenely, like new-churned butter. His erection pulsed down as he extracted the warm organs, kissing each one, then very delicately placing it aside.

Aorista, the man thought. The precious word hung in his mind like the breath of an angel. His arms were glazed red to the elbow. He rejoiced in the word.

He glanced up at his shadow on the wall.

But whose shadow was it? His own?

He smiled with love.

Then he dipped his fingers into the girl's blood and began to write.

Lilacs drooped in the glass of water: doom forthcoming.

Veronica could see the doom in his eyes even before they spoke. Experience? he'd shouted at her yesterday. What are you talking about! God, didn't he understand anything? Experience wasn't even the issue. The issue was life.

She loved him, but that wasn't the issue either. Jack was just a flatfoot that's what he always called himself. He had baggage, all right. "You're a terrible dancer," she'd once joked to him.

"Baby, I'm terrible at a lot of things," he'd returned, "and damn proud of it." Paranoid, she thought. Insecure.

Did she need that?

Veronica looked at the dying lilacs on the bar.

"Speak," he said suddenly. "Spit it out. What's going on? I didn't come here to look at the goddamn wall."

So much anger. Have I caused that? she wondered.

"We were meant to be together," he asserted. "I believe that. I don't think we should trash the whole relationship because of a few disagreements."

Whoa, Jackson, she thought. But all she could say back was, "I need a vacation."

Veronica looked down at the bar rail.

The Undercroft was their favorite hangout; they were regulars. It was a tavern, really, an under-the-street sort of place made of old brick and mortar and old wood. People came here who didn't want the downtown scene, an interesting mix of art students, journalists, writers, etc. But the

'Croft was just one more fixture in her life that she questioned. She'd met Jack here; she knew everyone. And that made this whole thing so much more unpleasant. Thank God she and Ginny were going on the retreat. Time away. Time heals.

They were both confused; she knew that. At the onset, their problems had bonded them. But now? Jack had had a serious drinking problem after the Longford case. It was before they'd met.

Something about a pedophile ring and child pornography. Jack had solved the case, but its aftermath had nearly destroyed him. Veronica sometimes forgot that he had problems too. How many times had her own confusion deluded him? How could he still pursue her when the language of her life clearly stated that now was not the time for her to be in love? It didn't matter that she loved him. Her life was missing something.

"I'm going on a retreat," she said. "This creative thing."

"A forum for artists. We get together and look into ourselves."

Jack closed his eyes as if to nudge something back, rage probably. "Look into yourselves? What are you looking f "

Craig was the weeknight barkeep. He was notorious. He probably accounted for half the 'Croft's business alone, via women. Ultimate charisma and preposterous good looks. Women had to take a number to go out with Craig.

Veronica and Jack smiled; they always did. Like nothing was wrong. Like, hey, no problem here, Craig. No, no, we're not having another fight. And if you believe that They ordered two Glenfiddich on the rocks...and smiled.

When Craig turned away, Veronica repeated, "I need a vacation."

"A vacation!" Jack snapped, then lowered his voice. "Fine. We'll go to Ocean City or something.

Veronica's throat lurched. "I meant a vacation from you."

There. She'd said it.

Jack's eyes strayed down the bartop, then to the lilacs. He absently lit a cigarette and spewed smoke.

Experience, the thought kept coming back. "I need some time to myself," she said. "Maybe that's why things aren't working. I need time to experience new things. I need "

"Artists need to experience new things. I really haven't, and I need to...to be a better artist."

Jack bitterly tapped an ash in the big Spaten tray. "Don't bullshit me. This is about sex, isn't it?"

Be honest! she shouted at herself. "Well, maybe that's part of it," she admitted.

"Getting laid by every swinging dick on the street is not going to make you a better artist, Veronica."

There he went again. Hostility. Sarcasm. Petty jealousy. He didn't even want to know what she meant.

Is that what he thinks? Goddamn him. Why should she feel guilty about being a success?

"Sometimes you're the biggest asshole on earth," she said.

He didn't hesitate. "I know that. But let me tell you something, honey. If you're looking for perfection, good luck. You ain't gonna find it."

Now she wanted to kick him as hard as she could. Were all men this immature, this pitiable?

He slumped at the barstool. Craig put their drinks down, knowing it best to walk away.

Jack's voice sounded ruined and black. "But I still love you."

I love you too, she thought oddly. But she couldn't tell him that, not now. She must be honest.

She must move on.

He was trying not to break apart in front of her. "I want us to give it one more shot," he said.

Veronica gulped and said nothing. The pause unreeled like a long rope over a cliff.

"At least tell me this. Have there been other guys since we've been together? Just tell me. I've got to know."

"I " she said. She felt forged in ice. The truth, damn it! Tell him the truth!

Jack's face looked about to slide off his skull.

She looked into her drink as if its depths possessed cabalistic answers. "It was rapport or something. He was the one who invited me to the retreat. When I met him...sparks flew."

"Sparks flew!" Jack countered too loudly. "Sparks fly when my muffler falls off my car, but I don't fall fucking in love with it!"

Craig looked on forlornly from across the bar; so did several customers. All Veronica could do was close her eyes.

"Our relationship is over, isn't it? Yes or no?"

She looked everywhere but at him. "Yes," she said.

He was nodding slowly, numbly, eyes shut. "So who's the new guy? What's his name?"

Veronica gazed again at the dying lilacs. "Khoronos," she said. "His name is Khoronos."

What was it about the man?

Certainly more than his looks. Veronica never let that sway her. Maybe just timing and place.

Success could be obstructive a lot of the time. The show, the praise, the sales that Stewie had made. But that wasn't it either. Something about the man himself. His air, perhaps.

"My name is Khoronos," he'd announced in a faint, attractive accent she couldn't place. "I've long been a voyeur of subjective psychology in modern art."

Subjective psychology? He must be another critic. "Voyeur is a strange way of describing artistic enthusiasm."

He stood six feet, dressed in a fine gray suit. Well postured, slender. She could tell he was in good shape by the way the suit fit. He looked late forties, early fifties, and had long grayish blond hair to his shoulders, which added to his dichotomy.

"Besides, Mr...Khoronos, I paint objectively."

He smiled like his accent. Faintly. "Of course. Just as Faulkner said he never put himself into his books, and da Vinci never used himself as his own model. It's every artist's right to lie about the motivations of his or her art."

Crazy Kisses by Tara Janzen
Creations 4: Caging the Beast by Marie Harte
Come Back to Me by Litton, Josie
Dangerous Dalliances (Maxwell Investigations) by Ibanez, Dawn
The Golden Hour by Margaret Wurtele
Dead famous by Ben Elton
More Than Her by McLean, Jay
Hush by Eishes Chayil, Judy Brown
Stonemouth by Iain Banks
Her Husband’s Lover by Ellis, Madelynne