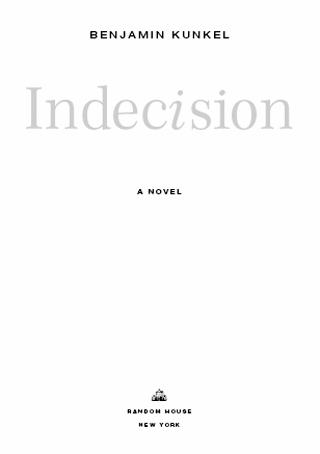 “Willing too is merely an experience,” one would like to say . . . It comes when it comes, and I cannot bring it about.

Not until my ears popped and the plane was coming down over the winking lights of Bogotá—or really it looked like any other city at night—did I raise my eyes from the page I’d been puzzling at and begin to think of the girl, or woman, the friend or acquaintance, Natasha, whom I was flying so far to visit. That’s how it was with me then: I couldn’t think of the future until I arrived there.

Yet everybody always remarked on my apparently remarkable, indestructible Dwightness that was immune to time and place. “Dwight, dude, you’re ex
actly
the same, man!” an old friend from school would say. Or “So lovely to have seen you, Dwight, you haven’t changed a bit!” a friend of mom’s would say. Even mom herself would sometimes say this. And I knew these people had to be on to something, since otherwise you would have to imagine either a) a conspiracy or b) a radical collective incompetence in matters of personal identity, both of which possibilities I tended to reject as someone who’d majored in philosophy in college and adopted, as the best of bad options, a pragmatist view whereby what most people
said
was true probably actually
was
true, or close enough. I never looked into this or other philosophical problems any deeper than was necessary to rate a B average in an era of runaway grade-inflation, but a pragmatist I was all the same. And not only did my dispassionate investigations reinforce this position, so did my whole agreeable personality that had always made me so popular with others.

I’m sorry to begin my narrative of important life-changing events so abstractly, especially when the story includes, as well as some sex and many drugs and my final prescription for what the whole world needs, plenty of specific sense data. (There were babies crying in the cabin as the plane sank down, and the guy in the seat beside me annotating in blue ink, with frantic circlings and passionate underlinings—“STRATEGY,” he wrote, and “IMPORTANT!!!”—an article on Colombia in a business magazine.) But
abstract
is how I felt, up in the air, on the plane, at the time. Other people might feel I stayed the same from place to place; but to myself I always seemed totally steeped in my environment, or dyed in local color, and now because in transit I felt suffused with utter nowhereness, and therefore like I might turn out to be anyone at all.

Only five hours before I’d still been in New York. I’d lived there for four years plus, mostly downtown on Chambers St., with three other guys and also occasionally another one, who still had a key and sometimes crashed on the less structurally degraded couch. I wasn’t leaving the city for good, of course—just ten days, was all. I think I’d left my bed unmade to increase its air of being there to be returned to. Besides, I had a reunion to go to when I got back, which was how the whole thing with Natasha got started.

Like Natasha, I was more or less popular at St. Jerome’s, where we went to prep school together, admittedly along with hundreds of others, and when long-awaited senior spring arrived for us in 1992 I was elected Form Agent for the Form of that year. (Rumors circulated that some satirical votes had been cast along with the serious ones, and I can acknowledge that the recount may have taken an afternoon, but in the end the results were certified, and I came out on top.) Being Form Agent meant being in charge for the rest of my life of fund-raising, reunion-organizing and the like, and in this surprisingly burdensome capacity I had recently sent off a mass email reminding everyone to come to our tenth reunion or else be thought a total loser afraid to show his face. Or hers. Some people wrote back with regrets or other news, the one who stood out being Natasha, who said she might or might not go.

My sister Alice happened to call right after I received this tremendous communication. It was nice that Alice was willing to talk to me again, and as a reciprocal-type gesture of renewed openness between us I read her the message in which Natasha could be construed as genuinely inviting me to go visit her in Quito. “Where is Quito?” I asked. “Because I’m thinking I could go.”

Quito (pronounced Key Toe, for the uninitiated) is in Ecuador, in South America. Alice told me so and I began telling her—not, she claimed, for the first time—about the fixation I’d harbored on-and-off for this younger acquaintance of hers. Al interrupted me: “What honestly is the deal, Dwight, between you and foreign women?”

It was true that Natasha was Dutch. And Vaneetha did hail from India. And Vaneetha
was
someone I’d been sleeping next to for a while, without us, however, all that often
sleeping together.
Lately other bodies tended to really bring home to me the famous other-minds problem, and I never felt like a woman I knew was more unknown to me than when and if we were kissing, not to speak of outright actual
fucking.
“Um, when they’re foreign . . .”

Alice, who actually looked a bit like Natasha, if you thought about it, which I refused to, snorted with semi-indulgence. But then she called back an hour later mysteriously saying, “Go. I’m insisting, Dwight. Go!”

“Are you sure? Wait, let me find the coin,” I said as I went hunting through various pants pockets in search of one of the very special unspendable coins that mom had given me for throwing the I Ching, which I never did, for ancient Chinese guidance. The first toss came up heads. So that plus Alice’s blessing had me feeling I should go. Yet I flipped again, then a third time. I knew a larger sample size would make the stats more accurate. Should I really go? But how do you ever know until you’ve gone? Alice was still on the phone for the fifth flipping. “You are mentally ill,” she said.

“You really fucking do this?”

Yet in the five days after I purchased the ticket to Quito through Bogotá, I’d gone from apartment to deli to multiplex to restaurant to park, all the usual places minus one, namely my former place of work, and as I’d made my rounds somehow it hardly occurred to me to think of Natasha at all.

There had been the email. Then the coin toss. Then I got fired, from Pfizer. The upcoming trip made even more sense to an unemployed person, presently hungover. It was like this little vial of purpose I could unstopper and sniff from in the morning. I really didn’t know what to do with myself next, once my savings ran out, closely followed by my overdraft protection, and possibly the reckless expenditure on last-minute airfare existed in the darkness of my un- or sub-conscious as a way of speeding up the reckoning. Or else I may have felt like the answer to what to do next hovered beyond me as a kind of Platonic form, and that I might bump into some approximation of it—and maybe Natasha was even it—during my time with her down in Ecuador.

The landing gear unfolded over Bogotá with hydraulic wheezing and a thud.

I guess the thing I’d always admired about Natasha from the start was her easy adaptability to anything. That’s what it had seemed to me and the other guys when she’d arrived as an incoming Fifth Former and played the Iroquois/WASP game of lacrosse like it was in actuality a Dutch thing; when she’d shown up at a seated dinner wearing the same sort of little black dress the society chicks from Manhattan wore; when she’d gone out to the Freaky Fields and taken ’shrooms with us, laughing and joking and dipping into drug-profundity like she was some veteran of the Dead show circuit; and above all when she spoke to us in her fluid, fluent English with hardly any accent to it even. Only pretty rarely could you detect a trace of the Netherlands—almost as exciting as if her dress had ridden a couple inches up her thigh.

But despite this way with fitting-in I never heard anyone accuse Natasha of
conforming,
which everyone at St. Jerome’s unanimously considered the unpardonable crime. (Myself, I was considered innocent, I was so preppy already: from time immemorial I’ve worn my wavy brown hair in this kind of Bobby Kennedy way, and I showed up at the rectory, first day of school, wearing the same style thin-waled Levi’s cords and Brooks Brothers shirt I still wear now in larger sizes, and even as a new boy I possessed, thanks to Alice, a respectable collection of second-generation Dead tapes.) But about Natasha: in spite of the whole adaptability thing, somehow she remained dignified and aloof. She was popular but belonged to no group, and had very definite and surprising opinions, particularly on euthanasia, legalized prostitution, and methadone. And as far as we knew she’d never more than kissed anyone.

Senior spring at St. Jerome’s I would conjure up as a time of underage drinking, anticipatory nostalgia, and skinny-dipping in ponds across whose surfaces there floated all these gossamer blobs of milkweed pollen like miniature clouds collapsed and dragged down to earth. One time Natasha and I sat on the dam by Long Pond as water ran between and around our thighs and we passed the prohibited flask back and forth. We agreed how we might like to know each other better. Then we graduated, Natasha going off like Alice had—and like I did not—to elite Yale University. (My diploma, cum nada, from Eureka Valley College in California, doesn’t hang in dad’s office as Alice’s via Yale and then her PhD from Columbia do.) In any case from all I heard from Alice or imagined by myself, Natasha kept up throughout her college years too that whole remarkable combination of participation and aloofness together, and still was not kissing many people.

Alice said—this was still on the phone—“Obviously the girl’s a lesbian.”

“Or she could just be shy.”

“Well I don’t seem shy either,” I said by way of refutation.

Somehow the thought of Natasha always tangled me into self-contemplation.

Now the tires struck the runway with a little squeal of swallowed hurt. The asphalt was smoking with steam and covered with little dribbles of red and white light. I looked around nodding at everybody in happy acknowledgment that our luck had held.

“Glad to be back on the ground, huh?” said the besuited dude in the seat beside me.

We would never meet again so I felt we could talk freely. “Actually I hate indeterminate places.” I’d meant to say
intermediate
but hadn’t used words all day.

Divine Liaisons by Poppet
Wings of Fire by Caris Roane
SiNN by Tina Donahue
The End of the Affair by Graham Greene
Blood Legacy: Heir to the Throne by Kerri Hawkins
Love in Retrograde by Charlie Cochet
Fire Spirit by Graham Masterton
Seven Elements That Have Changed the World by John Browne
The Dead of Winter- - Thieves World 07 by Robert Asprin, Lynn Abbey
The Faceless One by Mark Onspaugh