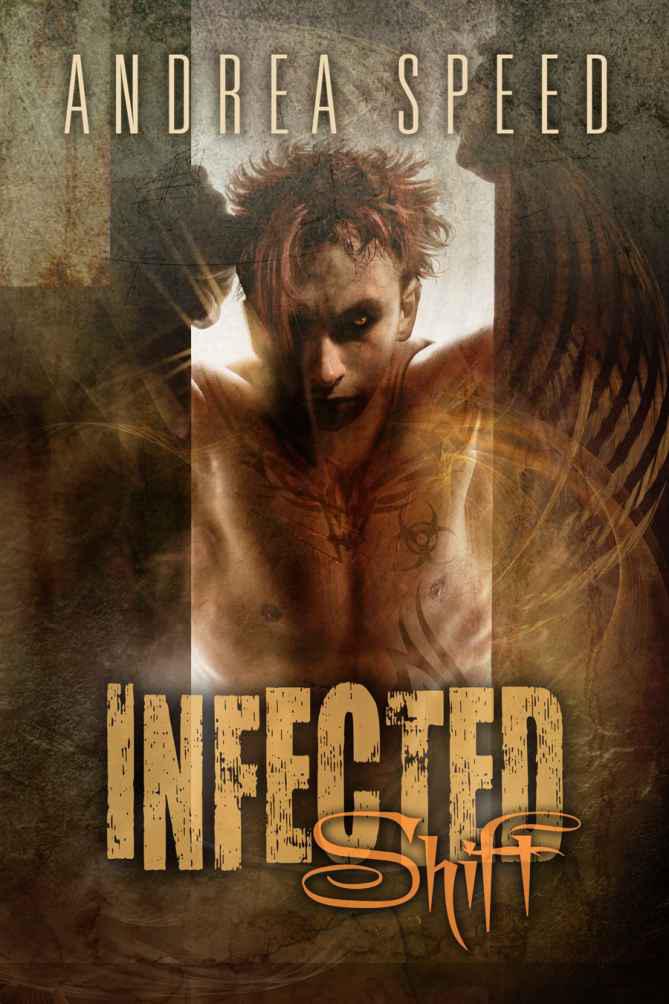 “When I picked up Andrea Speed’s Infected, I definitely did not expect to completely fall in love with the writing, the characters, and the plot.”

“If you are looking for a fascinating mystery suspense story with shape-shifters that actually shift, pick up a copy of
Infected: Prey
.”

“The deep emotion and love that Paris and Roan have for each other comes through from some very vibrant, strong, and powerful story telling.”

“This is a book that a reader should not read fast. Instead, sip it like a fine wine and draw it out to savor the experience for the full effect.” 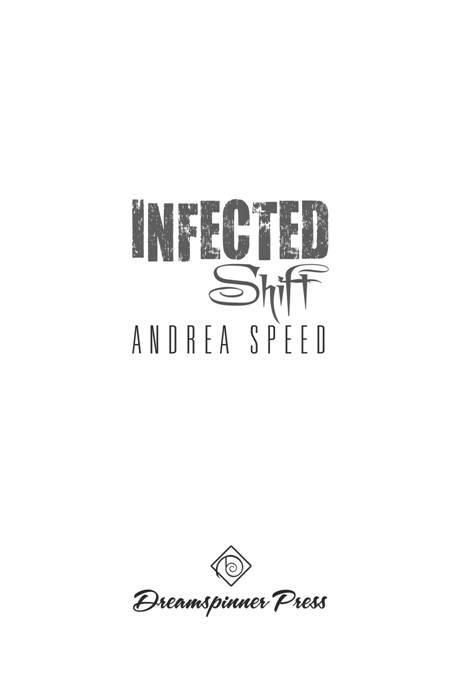 This is a work of fiction. Names, characters, places and incidents either are the product of the author’s imagination or are used fictitiously, and any resemblance to actual persons, living or dead, business establishments, events or locales is entirely coincidental.

Printed in the United States of America
First Edition
May, 2012

The author would like to give credit to the Comics Curmudgeon site for the laughs and for the use of the “I Don’t Understand Your Hostility Towards Me” mug, which just had Roan’s name written all over it (in a figurative sense). Also, I should throw a shout out toward Threadless for their many terrific T-shirts. If you want to follow Roan’s wonky sartorial style, this site won’t lead you wrong.

Thanks to everyone at Dreamspinner for their infinite patience with me. And for not breaking out the cattle prods. (Yet.)

And, as always, this is for the readers.

Book One
Shift
1
Lost at Birth

Roan
was so bored he’d decided that
Tanning Salon Pervert
would be the perfect name for his biography.

As he’d flipped through the TV channels last night, the information bar had been visible at the bottom of the screen, and as he surfed past one news magazine program, he saw their episode was titled “Tanning Salon Pervert.”
He didn’t watch it—on general principle he refused to watch anything that called itself a news magazine—but the words intrigued him. They sounded wrong in a wonderfully obtuse way, like “peanut butter hut” or “purple elephant pedophile.” Now, he’d never been in a tanning salon, and whether he was a pervert or not was subjective and almost totally hinged on your personal interpretation of the Bible (if you even had one), but the phrase just stuck with him. He bet he’d sell thousands of copies to disappointed people actually wanting the sordid tale of a man who got off on watching women fry under UV lights or get sprayed with fake bake. Instead, they’d get the mundane story of a gay ex-cop with anger management issues who could change into a lion at will.

Come to think of it, not that mundane. But nowhere near as interesting as a tanning salon pervert.

Perhaps Dylan was right. Maybe he was way too blasé about hate. Here he was, standing in front of a crowd that was chanting “Kill the cat!”, some waving homemade signs reading Drown Them in the River! (and some brought sacks—how cute) in front of the county hospital, along with a cordon of other cops, trying to keep them back from the doors. Grant Kim was out of cycle and was being transferred to a special holding cell at the county courthouse until he could be arraigned for several counts of second-degree murder (all killings committed while in cat form were charged as second degree). Imprisoning infecteds was difficult, mainly because no one felt safe releasing them into a prison’s genpop (not only was their blood super infectious, but they were obvious targets for harassment by other inmates), and the erratic natures of the viral cycles made it difficult to say for sure when they’d change. Most were kept in special hospitals, although lawsuits had been filed over that. (There was only one prison specifically made for infecteds, and that was in—of course—Texas.)

Normally, he wouldn’t be part of the cordon, but Chief Matthews was seriously concerned about the threat level and asked him to come in and help. He was glad to do so, even though Dylan was afraid: “If someone recognizes you, Roan, they will target you.”

What he didn’t tell Dylan was that was fine with him. He had always been one of those aggressive queers. Instead of adopting a victim mentality, whenever anyone shouted “You’re a fag!”,
his response would always be along the lines of “What of it?”
He was the same way as an infected. He was supposed to be ashamed because he had some fucking mutant virus? Because he was born with it? Fuck them. Yeah, he was infected. What of it? If someone wanted to attack him for it, they were free to, but he’d only let them leave a bruise. A bruise was all he needed to legally prove self-defense, even if he ended up kicking the living shit out of them. Which he would do, definitely; he’d make them pick their teeth up off the street. If they were very lucky, the lion wouldn’t come out.

The other cops were uneasy about having him around. He thought maybe it was because he wasn’t actually on the force anymore (adviser just didn’t count), or because he was gay or infected (or both), but he discovered the real reason from a rookie, Hawkins, a cute little short-haired bottle blonde who seemed almost too darling to be a cop. (That could actually work in her favor in some cases—some men might be reluctant to hit her. Others would attack her eagerly, though, so it was a give and take.) She came up beside him to take her place in the cordon, and after looking him up and down said, “So, you’re Batman.” Ah, so that was it. Everybody had seen the security tapes, and now everyone just assumed he was superhuman or something. He’d deny it, but he wasn’t sure if he was being completely honest. Not that he was superhuman, but other than human? Yeah, he might be in the other category.