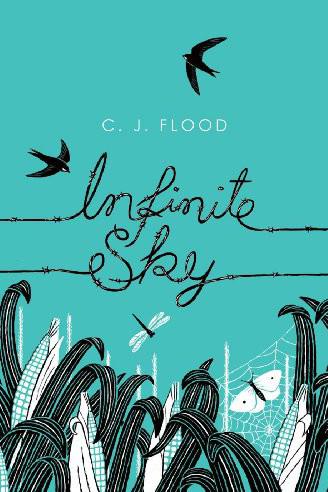 A truly beautiful book about the summer that changed one girl's life, as her mum leaves home, travellers set up camp in the family's field, her older brother goes off the rails, and she falls in love for the very first time. Opening with a funeral, Iris is mourning the boy in the casket - but who is it? Sam, her tearaway brother, or Trick, her tentative boyfriend? Over one long hot summer, we find out just how their three lives were turned upside-down.

The lines from
i thank You God for most this amazing
copyright 1950, © 1978, 1991 by the Trustees for the E.E. Cummings Trust. Copyright © 1979 by George
James Firmage, from COMPLETE POEMS: 1904-1962 by E.E. Cummings, edited by George J. Firmage. Used by permission of Liveright Publishing Corporation.

The right of Chelsey Flood to be identified as the author of this work has been asserted by her in accordance with sections 77 and 78 of the Copyright, Designs and Patents
Act, 1988.

This book is a work of fiction. Names, characters, places and incidents are either a product of the author’s imagination or are used fictitiously. Any resemblance to
actual people, living or dead, events or locales, is entirely coincidental.

For Mum, Dad and Nanny.

In memory of Grandad.

For most this amazing day, for the leaping greenly spirits of trees, and for the blue dream of sky and for everything which is natural, which is infinite, which is yes.

You can’t tell that the coffin holds the body of a boy.

He wasn’t even sixteen, but his coffin’s the same size as a man’s would be.

It’s not just that he was young, but because it was so sudden. No one should die the way he did: that’s what the faces here say.

I think about him, in there, with all that space, and I want to stop them. I want to open the box and climb in with him. To wrap him up in a duvet. I can’t bear the thought of him being
cold.

And all the time the same question flails around my head, like a hawkmoth round a light-bulb: Is it possible to keep loving somebody when they kill someone you love?

It was three months after Mum left that the gypsies moved in. They set up camp in the paddock one Sunday night while we were asleep. My brother Sam was excited when he saw
them.

Sam used to have a gypsy in his class: Grace Fitzpatrick. She’d been famous at school because she could do as many things with her feet as with her hands. She could even write her name
with them, which was funny because she couldn’t read. Sam, who’d sat next to her in assembly, said she smelt like cat piss and fire smoke.

‘They live off barbecues,’ he told me as we watched from Dad’s bedroom window.

I thought it sounded brilliant.

There was a caravan and a clapped-out car and, a few metres away, a fire with a pot hanging over it.

‘Be bloody hundreds of ’em by the end of the day,’ Dad said, emptying sawdust from his overall pockets onto the floor.

‘They’ll probably tarmac the field while we’re asleep,’ Sam said. ‘Try and make you pay for it.’

Dad made a growling noise. ‘Be a nightmare getting rid of them, that’s for bloody sure.’

He left us leaning on the windowsill.

Sam made dents in the wood with his fingers while I wondered what Dad was going to do. This was exactly the sort of thing Mum would have sorted. She’d have been best friends with the
gypsies by breakfast, had them falling over themselves to make her happy, even if that left them without a home.

‘Look at all those dogs,’ Sam said. ‘Bet they fight them. Tie blades to their paws.’

He dug his elbow into me until I squirmed.

Two greyhounds bounded round the paddock and I tried to imagine them snarling at each other, blades flying, but it was ridiculous, and then the caravan door swung open, and a tiny black dog
scurried out.

A woman appeared in the doorway. Tall and thin, with red hair falling over one shoulder, she looked beautiful. She lifted her arms above her head and stretched, revealing a stripe of tanned
belly beneath her green vest. Behind her the white caravan seemed to sparkle.

Tattoo #1: Tattoo by Jennifer Lynn Barnes
Beside the Sea by Veronique Olmi
Fear Familiar Bundle by Caroline Burnes
Undead and Unstable by Davidson, MaryJanice
The Avenger 15 - House of Death by Kenneth Robeson
Insatiable by Lucy Lambert
Blood Double by Connie Suttle
In Like Flynn by Rhys Bowen
Conquer Me (Sawtooth Shifters, #4) by Kristen Strassel
TKO (A Bad Boy MMA Romance) by Olivia Lancaster