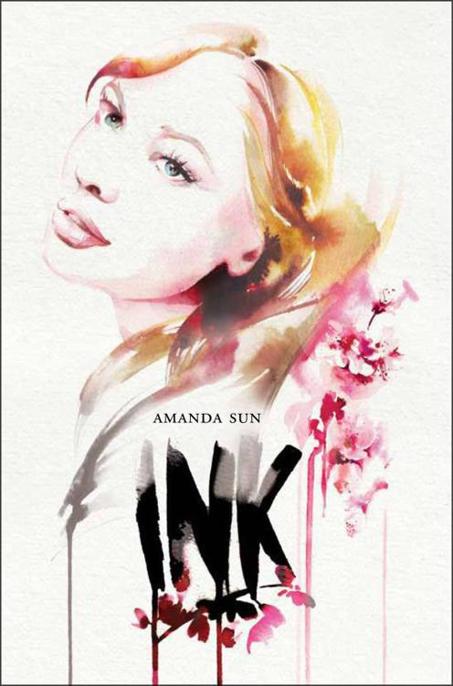 I looked down at the paper, still touching the tip of my shoe.

I reached for it, flipping the page over to look.

A girl lay back on a bench, roughly sketched in scrawls of ink.

A sick feeling started to twist in my stomach, like motion sickness.

And then the sketched girl turned her head, and her inky eyes glared straight into mine.

Also available from Amanda Sun and

I made it halfway across the courtyard before I realized I was still wearing my school slippers. No lie. I had to turn around and slink all the way back to the
genkan,
the stifled laughs from my classmates trailing me as I mustered what slippered dignity I could.

God, way to scream
foreigner.
You’d think after a couple of weeks I’d have the routine down, but no. I’d gone into that mode again, the one where I forgot everything for a minute and walked dazed through the sounds of the Japanese being spoken around me, not fully comprehending that it wasn’t English, that I was on the other side of the world, that Mom was…

I looked up to see Yuki running toward me, breaking from a group of girls who stopped chatting, staring at us. Their stares weren’t unfriendly—they just weren’t exactly subtle.

I guess that’s expected when you’re the only
Amerika-jin
in the school.

Yuki grabbed my arms with her slender fingers. “You do
not
want to go in there,” she said in English, motioning at the school entrance behind us.

“Um, I kind of have to,” I answered in broken Japanese.

Forget English,
Diane had said. It’s the easiest way to get flu-ent faster. It’s easier to forget everything, I guess.
Forget I ever
had any other kind of life.

Yuki shook her head, so I pointed at my slippered feet.

“You still shouldn’t,” she said, this time in Japanese. I liked that about Yuki—she knew I was trying. She didn’t insist on English like some of the other kids. “There’s an ugly breakup going on in the
genkan.
Really, really awkward.”

“What am I supposed to do, wait?” I said. “I’ll just be in and out, ten seconds.” I held out my fingers for emphasis.

I peeked around her shoulder, but I couldn’t see anything through the glass. I tapped the toe of my slipper on the ground; it felt so flimsy.

“Some big shot?” I said in English, and Yuki cocked her head to the side. “You know, a
daiji na hito
or something?” If Yuki was worried, it was probably gossip-worthy.

She leaned in conspiratorially. “Yuu Tomohiro,” she whispered. In Japan, everyone went by their last names first. “He’s fighting with Myu.”

Yuki’s friends giggled behind us. Had they been eavesdropping the whole time?

“Myu, his girlfriend,” she said.

“Yuu Tomohiro?” Yuki said, her arms waving wildly as if that would jog a memory I didn’t have. “Top of the kendo team? They let him get away with almost anything. You don’t want to draw his attention, trust me. He has this cold stare.

Yuki rolled her eyes. “You don’t get it. He’s unpredictable.

You don’t want to make enemies with a third year in your first two weeks, do you?”

I bit my lip, trying to peer through the glass door again.

I didn’t need more attention, that’s for sure. I just wanted to blend in, get my homework done and drift through school until Nan and Gramps could take me in. But I also didn’t want to stand in the courtyard in a pair of slippers, stuck for who knows how long. Anyway, it’s not like they could make my life a living hell if I left Japan, and it would all be sorted out soon, right? This wasn’t where Mom intended me to end up. I knew that.

“You’re crazy,” Yuki said, but her eyes shone with excitement.

Yuki raised her fists up to her chin.
“Faito,”
she said.
Fight.

In her most encouraging, you-can-do-it voice.

I grinned a little, then stepped toward the door. Even from outside I could hear the muffled yelling. When it died down for a minute, I took my chance.

Just in and out. I’m in slippers, for god’s sake. They’re not even
going to hear me.

I pulled open the door and let it close quietly behind me before I stepped onto the raised wooden floor. My heartbeat pounded in my ears. The yelling was still muffled, and I realized the couple were on the other side of the sliding door into the school. Perfect—no way they’d see me now.

I snuck between the rows and rows of shoe cubbies looking for mine. It wasn’t hard to find—it was the only one with a pair of leather shoes sticking out approximately a mile, surrounded by the neatly tucked-away slippers in everyone else’s boxes. We all wore slippers in the school to keep it clean, but they weren’t your typical cozy bedroom slippers. They were more like papery white f lats. Japan had slippers for everything—school, house, toilet room, you name it.

I reached for my shoes as Myu’s high and whiny voice echoed from the hallway behind the sliding door. Rolling my eyes, I pulled off the first slipper and then the other, clunking my shoes onto the floor and sliding my feet in.

And then the door slid open with a crash.

I crouched down, jolted by the footsteps stomping toward me. I did
not
want in on this performance.

I glanced at the door to the courtyard—too far to make it without being seen. And just by trying to plan my escape route, I’d waited too long. If she saw me now, the way I was pressed against the wall all spylike, she’d think I was eavesdropping, and I didn’t need rumors circulating about me. I was already a
gaijin,
an outsider—I didn’t need to be a weirdo, too.

“Oi,”
said a second, annoyed voice. It was deep and rich—

must be Yuu Tomohiro, dangerous kendo star. He didn’t sound that dangerous. In fact, he sounded pretty disinterested. Cold, like Yuki had said.

Myu rapidly churned out Japanese words I didn’t know. I caught a particle here and a past tense there, but let’s face it—

I’d only been in the country for a little more than a month and studying for five. I’d crammed all the Japanese I could, but I realized the minute I was on the plane that it had all been useless if I wanted to have a real conversation. At least I could name just about all the fruits and vegetables in the grocery store.

Great plan there. Real useful. Things had improved since I arrived, but still, talking to Yuki or taking notes in class was not the same as following the high-pitched babbling of a major social breakup like this one. That was hard enough in English. I could really only make out the most important detail, which was that she was seriously pissed. You didn’t need much vocab to tell.

I peeked around the wall of cubbies, hugging the wooden frame so I wouldn’t be seen. Yuu Tomohiro had stopped in his tracks, his back to me and his head tilted back, staring up at her. Myu’s long legs made her school uniform look scan-dalously short, her kneesocks slumped in coils around her ankles. She clutched a black book at the top of the steps, her nails painted neatly in pinks and glittery silver.

“What is this? What is it?” she said over and over, waving the book in Yuu’s face.

Um…
I thought.
A notebook?

Yuu Tomohiro shrugged and climbed the steps back up to the sliding door. He reached for the notebook, but Myu whisked it behind her. He sighed as he leaned back against the opened door, his slipper pressing against the wooden frame.

I rolled my eyes, even though my answer had been pretty much the same.

“Baka
ja
nai no?”
Myu shrieked at him.

He was taller than her, but not when he slouched like that against the wall. And the more she fumed at him, the farther he seemed to slouch into the door. He shoved his hands deep into the pockets of his navy blue school blazer and tilted his head down, like he couldn’t stand to even look at her or something. His copper hair, too bright to be natural, flipped in every direction like he hadn’t taken the time to brush it, and he’d grown his bangs long—the way he was staring at the floor made the tips of them brush against his eyelashes.

I felt the heat rise up my neck. Yuki had not warned me he was so, well, pretty. Okay, gorgeous. I almost expected sparkles and rainbows to burst out of the walls anime-style, except his lips were turned in a smirk, and the way he crumpled against the wall exuded a smug superiority.

It was obvious Myu got the message. She looked absolutely
livid.

What the heck had I walked into?

I couldn’t tear my eyes away. Myu’s face was puffy and pink, and every now and then her words got all choked up in her throat. She threw a string of questions into the air and they hung there with no reply. She became more frantic, the silence more tense.

What the hell did he do?

Cheat on her, maybe. That was the obvious answer or she wouldn’t be so pissed. And he had no reply for it, because really, what could he say?

Yuu Tomohiro shook his head, the copper strands dancing around, and his head suddenly twisted to the cubbies beside me.

I shrunk flat against the wall, squeezing my eyes shut and praying he didn’t see me. Myu had stopped ranting and a thick silence fell over the
genkan.

“Is someone there?” she said.

Oh, crap—he
had
seen me. It was all over. I’d forever be the
gaijin
who has no life and eavesdrops on bad breakups to sate my emo side.

I couldn’t bear it and I peeked around the cubby wall.

Yuu was looking away. So he hadn’t seen me after all. Thank god—I could go back to just being the Slipper Slinker.

Myu’s eyes puffed up and overflowed, the tears streaming down her cheeks. “So it’s really true,” she said. “She’s pregnant.”

Oh my god.
What
is
this?
Who
are
these people?

“Sou mitai,”
Tomohiro smirked, which was way too casual a yes. A response like that was downright cruel. Even
I
knew that.

Myu’s glittery fingernails tightened around the book. She raised it high above her shoulders, the loose papers inside it slipping until it was a mess of corners.

Then she hurled the book at the floor.

The notebook exploded with pages as it trailed down, the papers catching in the air and filling the room like rain. They twirled and twisted as they came down, white edges framing thick lines of black ink and charcoal. They fluttered down to the floor like cherry petals.

One of the drawings fell in front of me, tapping gently against the end of my shoe as it came to a rest.

“What the hell?” Yuu shouted, picking up the book from the floor.

Yuu straightened to his full height and tilted his chin back until his gleaming dark eyes gazed straight into hers. He took two swaggering steps toward her, bending forward until their lips almost met. Myu’s eyes widened.

He stood silently for a moment. Then he looked to the side, and I saw a pained look in his eyes. He breathed heavily, his cheeks pink, his eyes glossy. So he did have feelings after all, the beast. He started to reach for her chin with his fingers. And then his hand suddenly dropped into his pocket and he laughed.