Read Inside Out Online 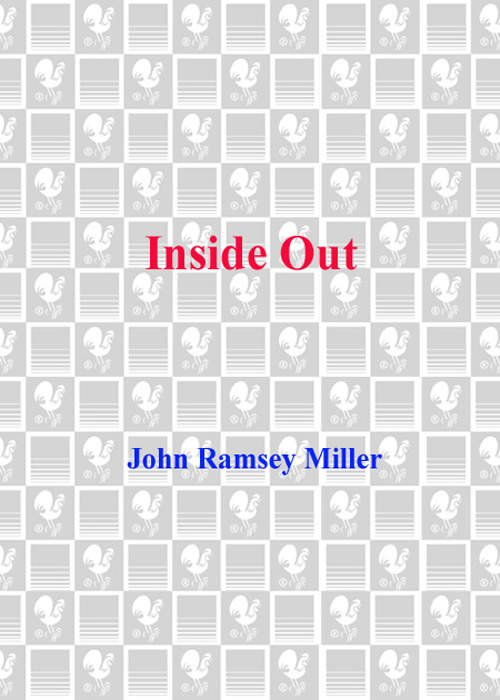 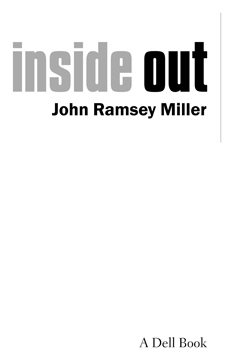 Praise for John Ramsey Miller's
Inside Out

Preview of
Upside Down

Dedicated to the memory of

“INSIDE OUT is a great read! John Ramsey Miller's tale of big-city mobsters, brilliant killers and a compellingly real U.S. marshal has as many twists and turns as a running serpentine through a field of fire and keeps us turning pages as fast as a Blackhawk helicopter's rotors! Set aside an uninterrupted day for this one; you won't want to put it down.”
—
Jeffrey Deaver, author of
The Vanished Man

“John Ramsey Miller's INSIDE OUT needs to come with a warning label. To start the story is to put the rest of your life on hold as you obsessively turn one page after the other. With a story this taut, and characters this vivid, there's no putting the book down before you've consumed the final word. A thrilling read.” —John Gilstrap, author of
Scott Free

“Full of complications and surprises. . . . Miller gifts his characters with an illuminating idiosyncrasy. This gives us great hope for future books as well as delight in this one.” —
The Drood Review of Mystery

“Twists and turns on every page keep you in phenomenal suspense until the last page. A superb novel.”
—Rendezvous

“Fast-paced, original, and utterly terrifying—true, teeth-grinding tension. I lost sleep reading the novel, and then lost even more sleep thinking about it. Martin Fletcher is the most vividly drawn, most resourceful, most horrifying killer I have encountered. Hannibal Lecter, eat your heart out.” —Michael Palmer, author of
Silent Treatment

“Martin Fletcher is one of the most unspeakably evil characters in recent fiction . . . A compelling read.”
—Booklist

“The author writes with a tough authority and knows how to generate suspense.”
—Kirkus Reviews

For Susan Dedmon Miller, my wife, my best friend and inspiration for the past twenty-six years. To my sons: Christian McCarty, Rush Lane, and Adam Ramsey Miller, and my daughter, Natasha. Also to my Father, Rev. R. Glenn Miller, and my second mother, Joann, for their love and steadfast belief.

This book would have remained desk ballast without the efforts of my agent, Anne “Anniehawk” Hawkins, of John Hawkins & Associates, NYC. There is no better.

Thanks to my remarkable editor at Bantam Dell, Kate Burke Miciak. I have been so lucky in my writing life to have only worked with the best. KBM made me understand both what this book needed to be and how to build a better one next time.

Heartfelt thanks to Irwyn Applebaum and Nita Taublib. They know why.

Everyone at Bantam Dell who has touched
Inside Out
has added something of themselves, and they should know that I value the efforts of each and every one of them.

I hope this book reflects the enormous respect I have for the ability and professionalism of the men and women of the United States Marshals Service. The Federal Bureau of Investigation and the Central Intelligence Agency are often plumbed for villains. I did it in this book, but we should never lose sight of the fine, brave, and dedicated individuals who make up those organizations, all of them dedicated to our continued well being. They, and our armed forces, are all that stand between the devil and the deep blue sea.

The inspiration for Winter Massey came from knowing United States Chief Deputy Marshal David Crews of Oxford, Mississippi, who is now a member of an antiterrorism task force. Any parallels between Winter's and David's lives are the sincerest flattery I can pay a friend who is a truly amazing professional. Also thanks to my shore patrol pal, Regional Security Director Commander for Navy Region Hawaii, Lieutenant Eugene “Dusty” Rhodes Jr. Any technical inaccuracies were either necessary for the story or because I wasn't paying close enough attention.

My dear friend and confidant, fellow thriller author John Gilstrap. His steadfast friendship over the years has been a special gift indeed.

Finally, a heartfelt thanks to all of the warm, remarkable people of Concord, North Carolina, who, for the past eight years, have somehow suffered this fool. If there is a better place on earth to live, I have yet to find it.

A blanket of angry black clouds passed over the Crescent City, blotting out the moon and suffusing the air with the scent of rain. A paddle-wheeler glided upriver, making for its dock on the edge of the French Quarter. The voices of the revelers on the deck fought a pitched battle with the optimistic strains of the Dixieland band. After the boat passed by, its wash slapped at the pilings under the pier and the warehouse.

A dark Mercedes sedan was parked in the doorway of the warehouse, its trunk open. Dylan Devlin looked up and down the pier, then finished loading the cargo, closed the trunk gently, and removed his gloves.

People usually visited New Orleans because of the fine dining, for the atmosphere of revelry—to stroll up and down Bourbon Street clutching a plastic cup of beer. Tourists flocked to the city to enjoy the architecture, the history, the casinos. But Devlin had no interest in any of that. To him, New Orleans was just another piece of geography to be learned, streets to be navigated, and problems to be solved or avoided. Dylan was a lucky man who had discovered his true passion: He was paid to do something he would have done for free.

A red-haired man of thirty-six with a youthful face, he had light-green eyes, and his smile was as disarming as a baby's. Since he was a child, women had wanted to coddle him and, as he matured, to offer their bodies and hearts, although only the former held any interest for him.

He opened the car door, climbed in, and drove out of the lot, leaving the loading-dock door wide open—like an unblinking yellow eye staring out over the Mississippi River.

The wall of rain moved down the river and closed like a curtain over the departing riverboat. Dylan pressed a button and the window purred up just as the downpour slammed into the pier.

The two boys were seventeen years old. They were in a white Lexus 400, which belonged to the driver's mother, a divorced real-estate attorney.

The teenagers had consumed two six-packs of Heineken and had managed to smoke most of a half an ounce of marijuana in the hours since sundown. It was raining hard and the wipers kept a beat along with the music. The Lexus was doing sixty-six miles an hour as the car approached the intersection of St. Charles and Napoleon Avenues. The driver saw the light change to red, but its meaning didn't penetrate the fog in his brain until it was too late to apply the brakes. A black Mercedes seemed to materialize before him, as if from nowhere.

The Lexus sent Dylan Devlin's Mercedes skidding seventy feet into the oncoming lane. It rolled over and disgorged the trunk's contents into the middle of St. Charles Avenue—a spare tire and two limp bodies. The bloody sacks on the corpses' heads and their contorted limbs made them look like a pair of discarded scarecrows.

Devlin shoved aside the physician's case on the passenger seat, which held his tools—the .22 automatic and silencer, the handcuffs. More than enough evidence to send him to death row. He slid from the stolen Mercedes through the shattered side window, dragging himself toward the curb like an injured dog. He gazed across the rain-slick asphalt at the corpses and marveled at how ridiculous they looked. He remembered shooting them, loading the two heavy bodies into the trunk.

Cars were braking and people were running into the street, shouting. When he saw the blue lights converging, he smiled because he knew it was over. He knew, too, that it was only just beginning.