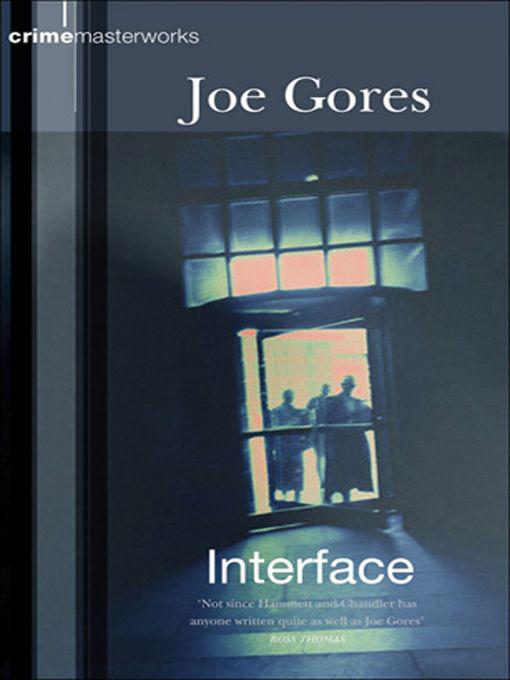 For that Stark villain,

a beautiful human being

Joe Gores (1931-2011) was educated at Notre Dame University and Stanford University, served in the US Army, writing biographies of generals, and spent twelve years as a San Francisco private investigator. He is the author of the acclaimed DKA Files series and has written screenplays and television scripts. He has won three Edgar Allan Awards and Japan’s Maltese Falcon Award.

A TIME OF PREDATORS

SPEAK OF THE DEVIL

I wish to express my thanks to Doctor Joel Fort for his invaluable technical assistance unselfishly given during the planning stages of this book.

We are creatures of a day.

What is one, what is one not?

Man is the dream of a shadow.

T
he dead Mexican lay on his back and stared at the ceiling. On the flat’s close air still lingered the tang of gunpowder, but the unnatural angle of the Mexican’s head suggested his Colt .38 had been a poor idea. He had gotten off one shot, then had been knocked backward over the sprung worn sofa, had landed on the back of his neck and had died.

The blond man flexed his hands once, like a wrestler who has thrown his opponent in the ring and is waiting for him to rise again.

‘Goddam fool,’ he said aloud, even though he was quite alone in the shabby flat.

He looked like a wrestler, in fact, or a pro football player, apart from horn-rimmed glasses with dark heavy frames which gave his hard, bony face an unexpected scholar’s cast. Ash-blond hair came nearly to his shoulders, and his short-sleeved white shirt, open at the throat, exposed arms which were lumped and knotted with muscle. His dark slacks emphasized the trimness of his waist and hips.

The blond man looked at his watch, looked at the dead Mexican, swore again, went to the window and drew aside the tattered lace curtains to peer out. He grunted at whatever he saw outside, and with sudden energy turned back from the window. When he moved there was a hesitation in his stride, a momentary check in the movement of his right leg almost too slight to be called a limp.

In the corner of the living room closest to the kitchen was the sort of Salvation Army dining table and chairs usually found in furnished flats in the Mission District. On the table were a brown attaché case which looked very new, and a squatty, evil foot-high figure of brown clay which looked very ancient.

The blond man picked up the pottery figure. Seen up close it had mold marks down the sides, which made it much less than ancient but no less evil. He dropped it on the floor. It shattered. From the shards, the blond man picked up an ordinary Ziploc plastic bag. Inside the bag were a considerable number of much smaller sealed bags, also of clear plastic, which contained scant measures of white powder.

As he laid the Ziploc plastic bag on the table with gloved fingers, the doorbell echoed through the unheated and sparsely-furnished flat. The blond man padded down the hall, his steps slightly uneven on the bare wood floor, to push the old-fashioned iron door-opener. This disengaged the latch of the street door at the foot of the interior stairs.

‘The front room,’ he called.

He turned away as the chemist started up, went back along the hall to the living room. He crossed the room to the attaché case and opened it. It was three-quarters filled with orderly rows of banded hundreds, not new. He dumped the Ziploc bag in on top of them, snapped shut the case again.

The chemist was old enough to have gotten only to the head of the stairs by that time, breathing heavily from the climb. He carried a black bag such as a doctor might carry, a small, precise man wearing a hat and an overcoat too heavy for the San Francisco autumn weather. Few San Franciscans wore a hat anymore. It, and the coat, made him look like someone mislaid during the twenties who was up and about again.

The chemist went up the hall. The hall was sufficiently dark to put the blond man in virtual silhouette at the end of it. His heavy shoulders, made sloping by the powerfully developed trapezius muscles, filled the living room doorway and blocked any chance view of the dead Mexican.

‘You aren’t Marquez,’ said the chemist, Addison, when he was close enough to be sure.

‘I’m the bagman. This is my apartment.’

The chemist stopped as if he had run into a turnstile. ‘I only deal with Julio Marquez.’

‘I killed him,’ said the blond man.

As he spoke, he struck the chemist heavily in the face with an almost casual swing of one club-like arm. The chemist’s hat flew off. His black bag slid several feet down the hall with the sound of breaking glass as he himself slid down the wall to a sitting position. His damaged face looked like a cartoon face drawn to express surprise.

The blond man checked the chemist’s pulse, listened to his respiration, loosened his tie, lifted an eyelid. He was unconscious, his eyes rolled back, but he was breathing steadily and his pulse was strong. The thread of blood inching down out of his left nostril was too slight to be from anything but tiny capillaries ruptured by the force of the blow.

Leaving the chemist where he was, the blond man went by him down the hall to the bathroom. The medicine chest held only two twenty-milligram ampules of clear liquid. He looked at them thoughtfully.

‘So it will work as well for the police as for the others,’ he said, again aloud.

One of the ampules slipped through his fingers to shatter on the grey octagonal floor-tiles below the wash basin. He left it there, replaced the other in the medicine chest, went out without stepping into the mess.

In the front room he pulled on a black topcoat, picked up the attaché case and started out without a backward glance. Then he stopped. He stared at the dead Mexican. He grinned. He squatted and opened the attaché case. He opened the Ziploc bag, shoved the dead hands, one after the other, down among the plastic bags. The blond man left taking with him the dead man’s fingerprints, shut away in the attaché case.

The house was narrow, Victorian, painted grey and peeling, three-storied if you counted the ground floor which had no flat in it. The October morning was cold and bright, the sun just coming up and still without warmth. Two battered metal mailboxes were fixed to the door of the inset garage. The box for 1748 wore a new slip of paper with the word
DOCKER
typed on it.

The blond man, wearing his black topcoat and carrying his attaché case, appeared in the street door of 1748 through which the chemist had entered three or four minutes before. He descended the grey, chipped stairs to Bryant Street. The ornamentation of the black iron handrail was softened with a patina of old layered paint and was gritty with city dirt.

At the bottom of the stairs the blond man dropped the front door key into the mailbox for 1748. That made him the
DOCKER
typed on the slip of paper. He turned away, stripping off thin gloves of surgical rubber, pinching the attaché case between arm and body while his hands were busy. He looked both ways before stepping off the curb to cross deserted Bryant Street, ignoring the mustachioed youth sitting on a stoop a few doors away.

On the far side of the street was Franklin Square, which was bounded by Bryant, Potrero, Sixteenth and Seventeenth. Apart from this park and the nine houses on the even-numbered side of Bryant’s 1700 block, it was a totally industrial area. To Docker’s left was the site of the old Seals stadium, now a merchandise mart which itself had gone bankrupt in the midst of its mindless blacktop parking lots.

Docker tossed his attaché case up on the steep grass above the chest-high concrete retaining wall of the park, then jumped up after it. He started up the slope, his limp more noticeable during the climb.

Franklin Square was a flat, green oasis above the surrounding streets, studded on this edge with tall eucalyptus trees which smelled like wet dogs. Docker went through the trees and out across the worn grass toward the restrooms. They were set under a dozen young evergreens on the far side of the park, toward Potrero Street. A black boy and a black girl with wildly exaggerated Afros, both wearing slacks and velvet-trimmed high-heeled boots, were arguing about another girl the boy had taken home the night before. A white hippie chick with a blue bedroll beside her was leaned back against one of the trees as if she were exhausted. Her eyes were shut and her face wan; from the roach between her fingers drifted the harsh scent of burning grass into the clear air.

When Docker was halfway across the grassy area, the youth with the bandido mustache appeared at the top of the slope. He went through the trees, started out into the open as Docker reached the distant restrooms. His mustache, color, and facial features made it impossible to tell whether he was of Negro or Spanish blood.

He started trotting when Docker emerged from the restroom and disappeared around the far side of the small stucco building. He went around the corner fast. But Docker had waited, his back against the notice someone had spray-canned on the wall beside the phone booth:
SYLVA CAN ASS IS VISITACION VALLEY
’
S SLUT
!

Docker seized double handfuls of the boy’s fleece-lined carcoat and slammed him up against the phone booth, hard enough so the back of his head starred the glass. Only thin crisscrosses of embedded wire kept the glass from breaking.

‘You followed me up from Bryant Street,’ said Docker almost dreamily. He lifted the dark youth so the toes of his boots just touched the ground and held him that way, jammed back against the side of the dark green phone booth. ‘Talk to me.’

The youth’s eyes were watering and his nose was running. His arms twitched. Docker giggled suddenly and set him back on his feet.

‘There’s a pusher working this park?’

‘Right, man.’ The hype was sweating. His eyes darted first one way and then the other. ‘It’s my connection’s turf, man, dig, but he got busted. But I heard someone was takin’ over, so I waited.’

Docker broke into sudden laughter. It was a high, nervous laugh edged with paranoia, which didn’t go with his earlier calm. He said, ‘There’s a dead man over in seventeen-forty-eight. There’s another man there, unconscious. There’ll be money in their pockets. In the bathroom is a twenty-mill ampule of speed you can sell for more bread. The key’s in the mailbox. Get moving.’

Black Earth: The Holocaust as History and Warning by Timothy Snyder
The Vampire Dimitri by Colleen Gleason
The Western Dare (Harlequin Heartwarming) by Fox, Roz Denny
The Mister Trophy by Tuttle, Frank
Reckoning (The Empyrean Chronicle) by Siana, Patrick
Rhythm in Blue by Parks, tfc
Salby (Book 2): Salby Evolution by Moore, Ian D.
Across The Sea by Eric Marier
The Stranger Within by Kathryn Croft
The Faithful Wife by Diana Hamilton