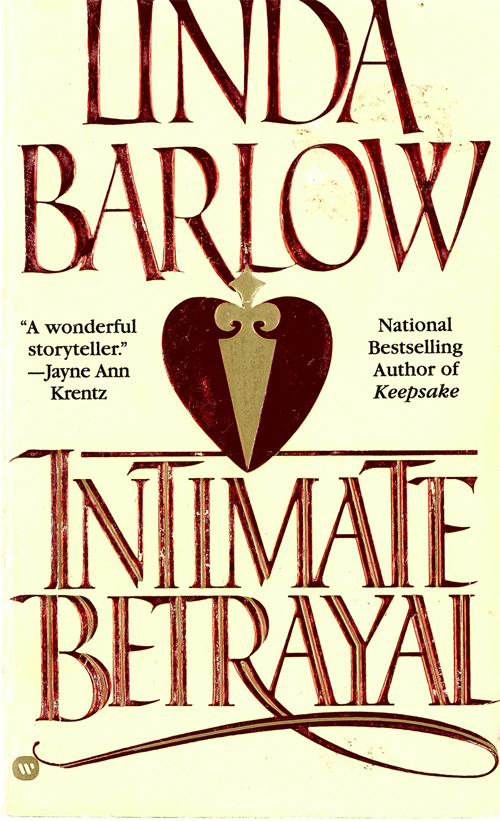 “With skill and finesse, Linda Barlow exposes every nerve, explores every relationship while telling an immensely good story.”

—Sandra Brown, author of
The Witness

“A turn-of-the-century saga… filled with charming, dynamic characters who jpfespd breathe in the reader’s mind. You will laugh
and by through the adventures and intrigue that deep the pages turning.”

“The plot progression is extraordinary… a suspenseful, exciting read,”
,.

“Stunning, powerful, and fast-paced romantic suspense that will keep the audience in a high state of anticipation.”

Annie Jefferson sent a quick prayer skyward. Standing in front of her was Matthew Carlyle, the one man who could save her
company. She gave him a tentative smile, which he did not return.

“I appreciate your taking the time to meet with me,” she said. “I know how busy you are.”

“Well, of course you must be, as CEO of Powerdyme. I really appreciate the way you’re taking a firsthand interest in it instead
of sending a vice president or somebody like that to talk to me.”

I’m babbling,
she thought. She smiled again, and this time he smiled back. Charlie always used to tell her that her smile was irresistible.

Ah, Charlie, my darling, I miss you so much!

“Sit down, please,” Carlyle said, indicating a simple straight-backed wooden chair just opposite his desk. All the
furniture would have to go when the office was redesigned, she thought wryly as she sat down on the hard, unforgiving chair.
She felt like a prisoner in an interrogation room instead of a corporate designer addressing a prospective client.

“There are several things I’d like to discuss with you, Annie,” he said.

Annie.
Wouldn’t it have been more professional to address her as Mrs. Jefferson? It wasn’t as if they knew each other well. At least…
Don’t think about that,
she warned herself.

“I presume you’ve reviewed my proposal,” she said.

Matthew Carlyle had not sat down but was leaning one hip against the front of his desk. It seemed to her that he was closer
than was necessary in such a spacious office. He was known in his business circles as a brilliant, ruthless, and intimidating
man, and Annie suspected that he was quite deliberate in his posture and body language. How much simpler it must be to negotiate
his multimillion-dollar computer industry schemes when he was able to establish complete and unquestioned dominance over his
associates and competitors.

He was a good-looking man. Tall and lanky, without an ounce of fat visible on his body. He had to be at least forty, but he
didn’t look it, which was probably the result of rigorous exercise in some wealthy executive gym. His hair was dark brown
and he had high, angular cheekbones. His eyes were a deep shade of green.

“I’ve reviewed your proposal, and I think it’s excellent,” he said.

“I’m delighted to hear it.” Thank goodness! He was a difficult man to read, and she’d been starting to wonder. The fact that
he’d invited her here for a personal meeting had been encouraging, but she hadn’t wanted to set her hopes too high.

Still, it was hard not to hope. The proposal to design the new corporate headquarters of Matthew Carlyle’s incredibly successful
Powerdyme had been one of the most exciting she’d ever worked on. Annie had given it every ounce of her creativity and skill,
and she was proud of the results. Her proposal was superb. If Carlyle didn’t recognize that Fabrications could provide him
with the best design at the lowest price, then he wasn’t the businessman he was reputed to be.

She hoped he was able to recognize quality when he saw it. Because, much though she hated to admit it, she needed Matthew
Carlyle. If she got this job, which would bring in more money than her last six projects combined, Fabrications would survive.
If not, the company she had started with Charlie, her late husband, would very likely fail.

It was as simple as that.

Carlyle picked up a folder from the top of his desk. Her proposal. He leafed through it casually, nodding once or twice. “Your
work is top-notch. I’ve worked with other design firms—much bigger and more famous than yours, in fact—so I know what’s out
there. As you may know, I’ve always taken a personal interest in such matters. The working environment I provide for my employees
is vitally important.”

Indeed she knew, and she’d worked with that in mind. One of the outrageously successful computer companies of the baby boom
generation, Powerdyme was famous for the way it had combined high tech brilliance and ingenuity with the New Age ideals of
the counterculture. You didn’t go into Powerdyme with the same design solutions that you might present to General Motors or
even IBM.

After all, Matthew Carlyle had started out as a slap in the face to corporate America. Together with a few other young
high technology entrepreneurs of the 1970s and ’80s, he’d turned inside out the old ideas of how an American corporation should
be run.

“We are, as you know, an unconventional company,” he continued. “This has to be reflected in our workspace. I’ve received
several other serious proposals for this project, but I have to say that yours has the best solutions to our unique problems.”

He lifted a page from the folder and examined it, smiling slightly and nodding. “Really, Annie, you’ve done a fantastic job.”

“Thank you. I enjoyed it,” she said in a heartfelt tone. “Most corporate design work is fairly routine, but this one has presented
all sorts of exciting challenges.”

“You enjoy challenges, I take it?”

“Oh yes.” Although at this point in her life, she thought wryly, she would have been happier with fewer situations that were
challenging and more that were secure and certain.

“What about risks?” he asked. “You enjoy them too?”

She was alerted to the new tone in his voice. “What do you mean? What sort of risks?”

“You know what I mean. Are you a risk taker? Do you love being out there on the edge, feeling your adrenaline pumping as you
reach for the ultimate thrill?”

“Come with me. Don’t think about it. Just come.”

“You can. You’ve come this far. Some things are meant to be.”

Annie felt her cheeks grow hot. Was he too thinking about that magical, terrifying, far-better-forgotten weekend? Or had he
put it out of his mind?

He tossed the folder that held her proposal down onto his desk. “Well, the fact of the matter is, neither am I.”

Annie flinched deep inside. Something was going wrong; she could feel it. Her fingers clenched into fists. Was he going to
turn her down?

“Your work is indeed excellent, but I’ve done some checking into the current status of your design firm. I’m afraid I don’t
like what I’ve learned. Fabrications is a small company—far smaller than any I’ve worked with in the past. It was quite successful
in the mid-eighties, but the past few years have been increasingly lean, and the unfortunate death of your husband last year
has been disastrous for the firm. You are not an architect, Annie. You’re a designer, and no doubt a very good one. But the
architect you’re working with now is nowhere near as good as your husband was. And that fact is hurting your firm.”

That fact was killing her firm, actually. But she’d been trying to hide it and certainly wasn’t going to admit it now. “My
husband was special,” she said. “You’re right that it hasn’t been easy to replace him. But Sidney Canin is a good architect,
and I have every confidence in him.”

“He’s mediocre, and you and I both know it.”

Annie felt herself flush. “As a matter of fact, Sid won’t be with us much longer, although that has nothing to do with his
job performance. He’s leaving for personal reasons—he’s originally from New York City and he wants to move back there. I’m
in the process of interviewing architects now, and I’m optimistic about the talent out there. I intend to hire the best.”